ASUS is becoming one of the strongest supporters for Intel Atom processors as an increasing number of its mobile devices are powered by its processors. First announced in February 2013, the Intel Atom "Clover Trail+" processors have been appearing in recent ASUS devices such as the Fonepad, Fonepad Note FHD 6 and the Fonepad 7.

One month ago at Consumer Electronics Show (CES) 2014, ASUS unveiled four new smartphones powered by Intel Atom processors. They are the 4-inch PadFone Mini, the ZenFone 4, ZenFone 5 and ZenFone 6. We dropped by the ASUS booth at Mobile World Congress (MWC) 2014 today to check out these devices. Here's our take.

The PadFone family is known for its unique concept of docking a smartphone with a tablet station, and the PadFone Mini fulfils the needs of consumers who want a 7-inch tablet. 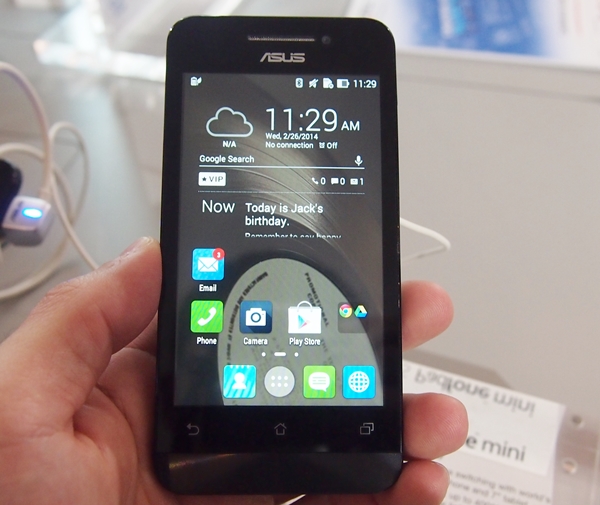 Design-wise, the Fonepad Mini has a striking resemblance to the BlackBerry Z30 as it has a lighter grey accent at the bottom lip of the device. Above the accent are the three standard navigation buttons (back, home, recent), a design trait that you either hate or like it. Some consumers do not want software buttons as they take up unnecessary screen estate while there are others who think capacitive buttons are outdated. 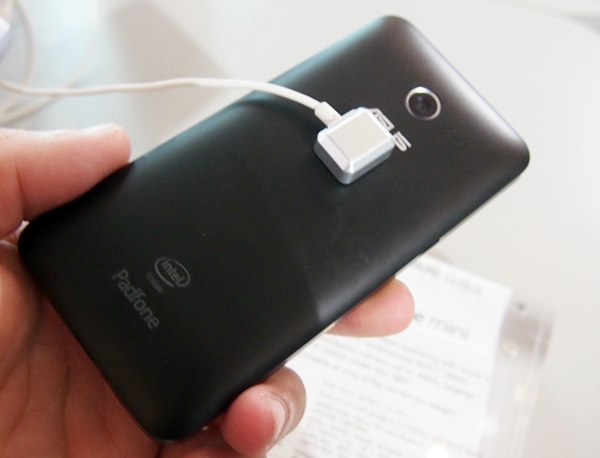 Unlike its more expensive and premium PadFone devices, the PadFone Mini is targeted at the entry and mid-range market segments. To cut costs, the chassis of the PadFone Mini is made up of plastic. We were actually very surprised by the build quality of the device when we first picked it up as the PadFone Mini gave a very solid feel. The matte texture also helps in giving it more grip and a professional look compared to glossy plastic. 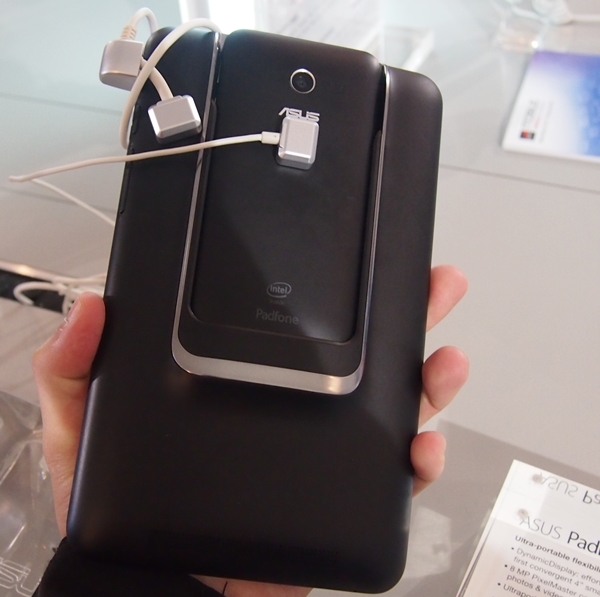 We had no problems sliding the PadFone Mini in and out of the station dock; it was a smooth experience. The phone also appeared to be secured tightly in the station dock, hence it shouldn't slide out that easily. 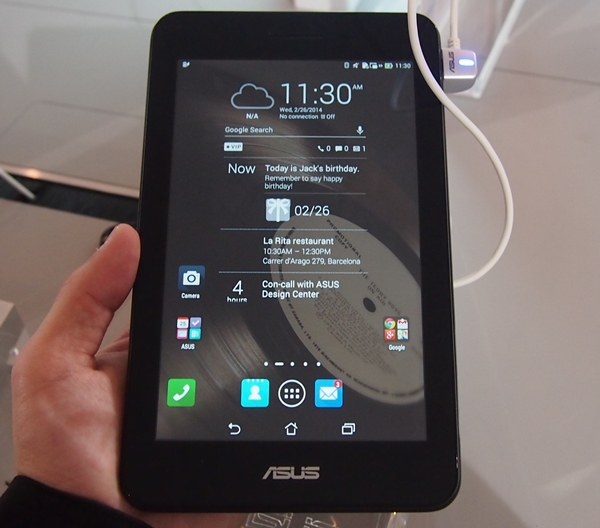 The combined weight of the PadFone Mini and station dock is about 376g, which is a little on the heavy side considering that the Huawei MediaPad X1 weighs only 239g. However, you have to take into account that there are two devices - the 4-inch PadFone Mini and the 7-inch Station dock - and the Station dock has a 2,100mAh battery.

The ZenFone is a new series of smartphones that ASUS announced at CES 2014 that offers three display sizes (4, 5 and 6-inch) for different needs of consumers. 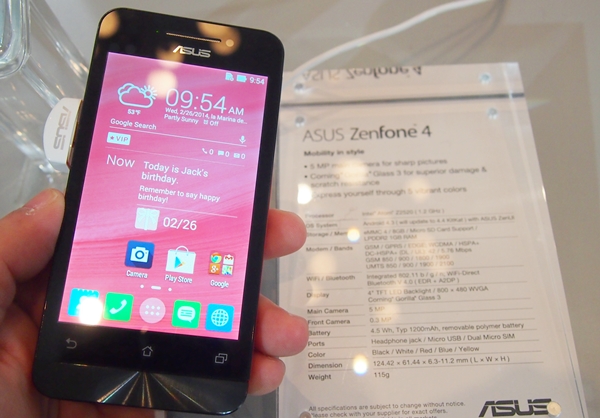 We are clueless on why ASUS offered a ZenFone in the 4-inch category since it will be competing with the PadFone Mini for the same group of consumers. Perhaps there are some consumers who may not want or need a 7-inch tablet and just want an Android smartphone that can easily be used in one hand. 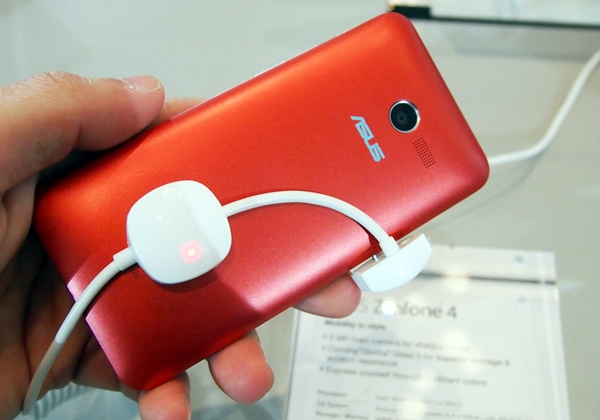 Most of its specs are similar to the PadFone Mini except for a lower processor clock speed of 1.2GHz and a 5-megapixel rear camera. Its weight is lighter at 115g, making it quite easy to use in one hand and carry around. 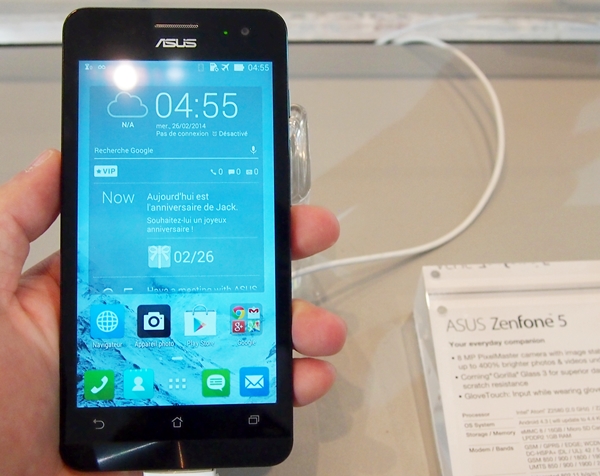 The ZenFone 5 is a slightly more powerful smartphone; it comes in two variants: one running on the Z2580 dual-core 2.0GHz processor and the other powered by the Z2560 dual-core 1.6GHz processor. It also supports dual micro-SIM cards. 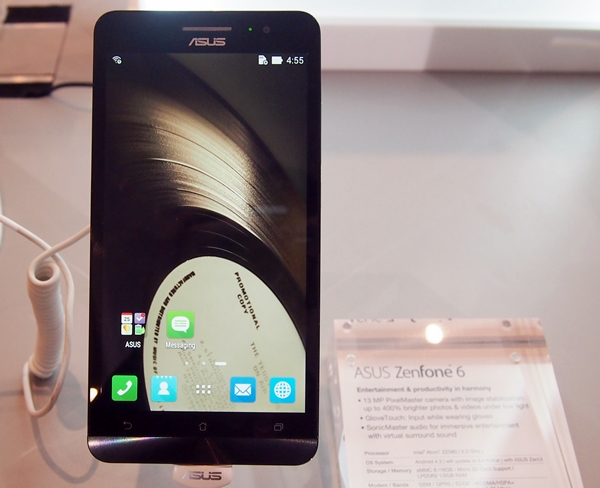 The ZenFone 6 is ASUS's first foray in offering a phablet device aside from the Fonepads which we viewed them as tablets. As its first attempt, the ZenFone 6 has quite decent specs such as an Intel Atom Z2580 dual-core 2.0GHz processor, 2GB RAM, 6-inch 720p display, 13-megapixel rear camera with f/2.0 aperture and a 3,300mAh non-removable battery.

In general, all three ZenFone devices sport the same build quality, feel and finish. Similar to the PadFone Mini, we were surprised (in a good way) by how good the devices felt in our hands. 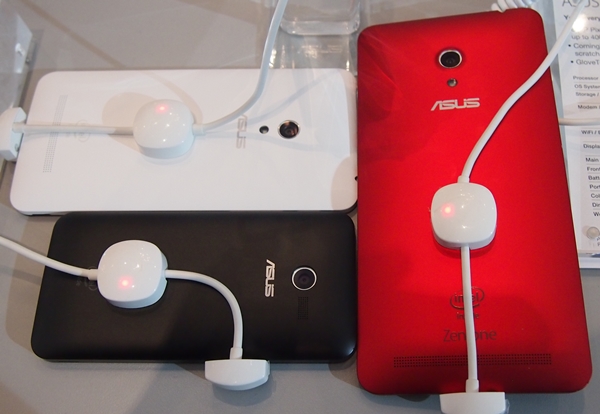 ASUS introduced a sublime new user interface (UI), the ZenUI on its latest four mobile devices. It has simplified icons and menus with five different color themes to match the color of the device. One of the more noticeable new features is What's Next, which reminds the user of missed calls, new messages and important dates. 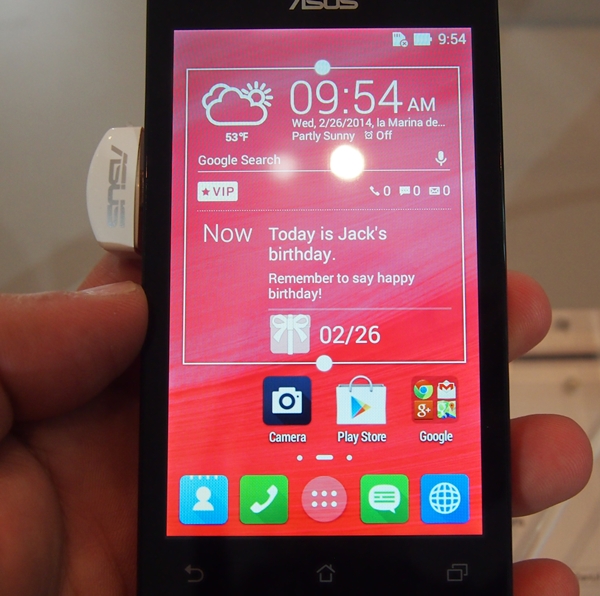 What's Next is deeply integrated into the Zen UI. By default, it is shown on the lock screen as a widget where you can resize and place anywhere. Notifications from the people you contact or care about the most are compiled together on a separate screen. It also has a smart function where it will notify your peeps via a phone call, message or email when you are running late for an appointment. Reminders on upcoming appointments are shown on the widget too. 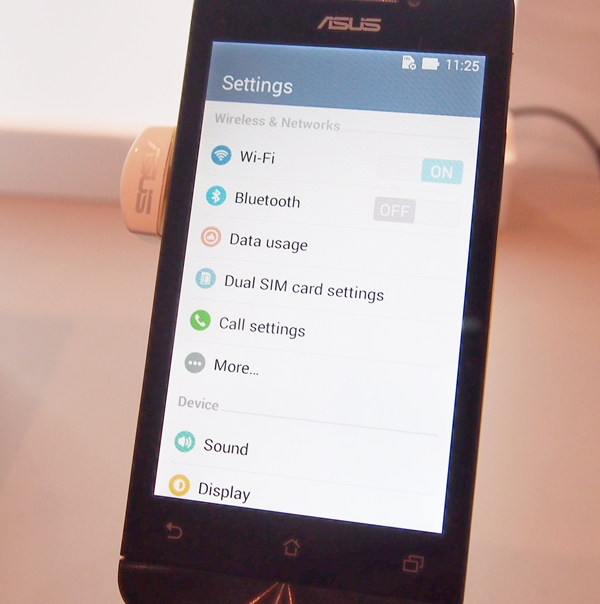 The PadFone Mini and ZenFone series will be coming to Singapore although pricing and launch dates are not confirmed at time of publication.