Hands-on with the latest premium audio players from Astell&Kern 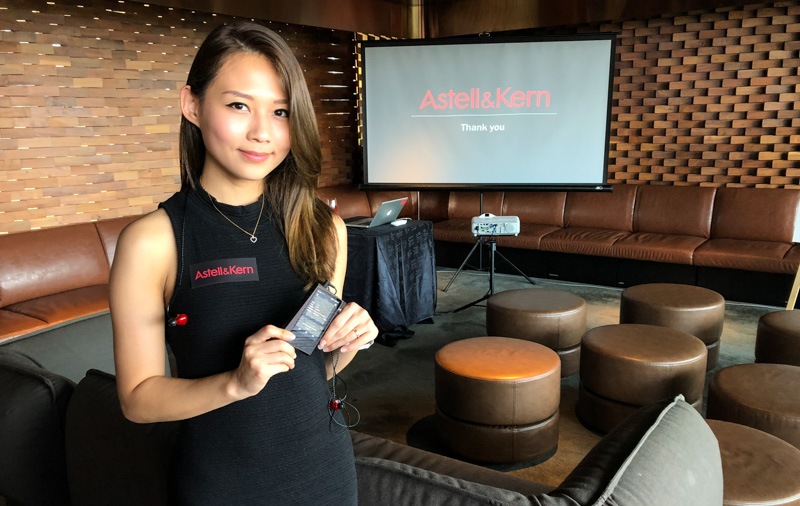 Astell&Kern has long been pushing the limits of digital audio players (DAPs), with the latest being their flagship A&ultima SP1000 from last year. This year, they’re adding to the family with two new lines – the premium A&futura line, and the new “standard” A&norma line. 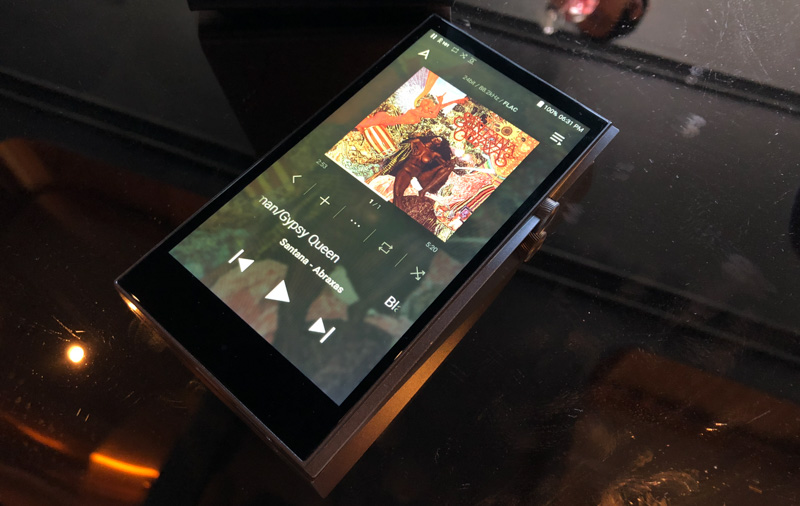 The SE100 is the first model in the A&futura line, and it comes with a professional-grade DAC that’s more commonly used with desktop PCs – the SABRE ES9038Pro, which does sound processing over eight channels (four channels of processing for each audio channel) for the cleanest possible sound.

Designed around an Octa-core CPU, the SE100 has a signal to noise ratio of 122dB@1kHz (unbalanced), and a THD (total harmonic distortion)+ Noise ratio of just 0.0007% @1kHz so you’ll truly get only the cleanest sound. The DAP can play up to 32bit/384kHz PCM audio, and also Quad DSD format natively. Astell&Kern says the SE100 does native bit-to-bit DSD playback up to 11.2MHz, so the music is played back "bit-to-bit, just as the artist and engineer intended for it to be heard.” 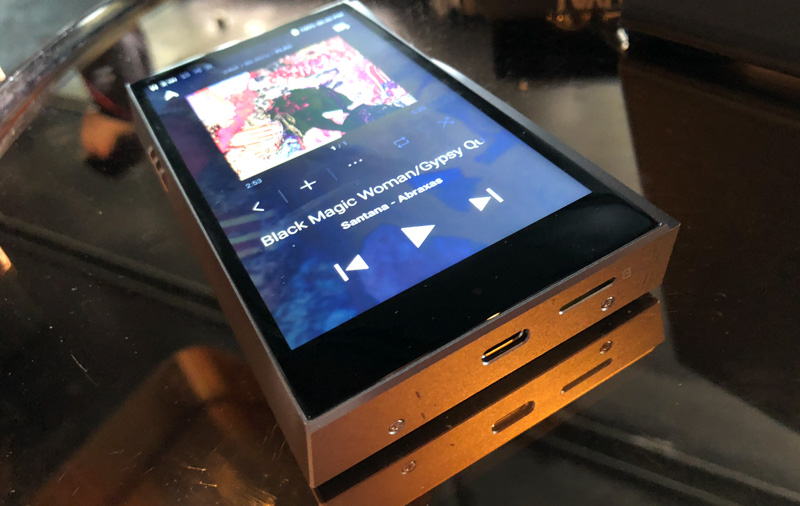 To allow for faster file transfer and charging, the SE100 gets USB Type-C support. This allows for a full charge in about two hours for the internal 3,700mAh 3.8V Li-Polymer battery. The SE100 has a continuous playback time of up to 11 hours (based on listening to 16bit/44kHz FLAC files at 75% volume with the LCD off).

The SE100 measures 75.8 x 132.7 x 15.3mm and weighs just 241g. It has a 5” 720x1080 touchscreen, 128GB of internal storage, and a stylish aluminum body with a prominently featured volume knob. It also gets a nicely designed diamond-patterned glass back plate that completes the premium look, though this can be prone to fingerprint marks. Overall though, the SE100 is a nice looking DAP. 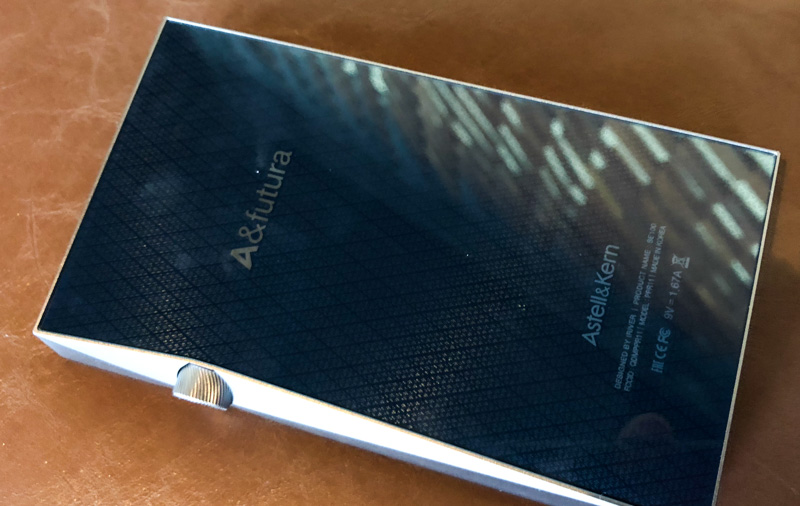 We had the chance to put the SE100 through a quick round of testing, and were immediately impressed by the crisp, vibrant screen. The menu system is simple enough to use, requiring just a few swipes left or right to access tracks via album art view or the more traditional artist/track list view.

Starting off with a recording of Riding With the King by Eric Clapton & B.B. King, quickly showed how far the SE100 could push stereo imaging. It literally felt like we had Clapton in our left ear and B.B. King in our right for most of the piece, with both vocals clearly forward from the rest of the backing instruments.

Slightly aggressive on vocals is how we’d describe the sound, but the player is capable of good detail and imaging too, as evidenced on a recording of Santana’s Black Magic Woman. Taken from his Abraxas album, this track has vocals, conga drums, timbales, bass, percussions and of course, Santana’s electric guitar at play, and the player manages to give each and every element a chance to shine.

Slowing things down with a rendition of What a Wonderful World by Eva Cassidy, we felt the SE100 presented Cassidy’s vocals with a touch too much weight, so that they overwhelmed the backing instruments. Still, the piece showed off a nice wide sound stage, and an ability to convey good performance in the highs.

Overall, an impressive showing worthy of a flagship player for Astell&Kern. Next up, we auditioned the A&norma SR15. Retailing for S$999, this probably isn’t something you would consider “entry-level”, but it certainly is one of the cheaper DAPs you can get from Astell&Kern.

The company says this series of players is meant to “give those new to portable high-re music players a feature-packed introduction” to the brand. And so, the SR15 gets a proven DAC chip by way of dual Cirrus Logic CS43198 chips and a Quad-core CPU that allows for speedier decoding and response. The SR15 supports native DSD bit-to-bit decoding, and plays music files in up to 24-bit/192kHz resolution. 32-bit audio is downsampled by SRC (Sample Rate Converter), and DSD 128MHz is converted to PCM for playback. It comes with just 64GB of internal memory, but has support for microSD cards up to 400GB in capacity. 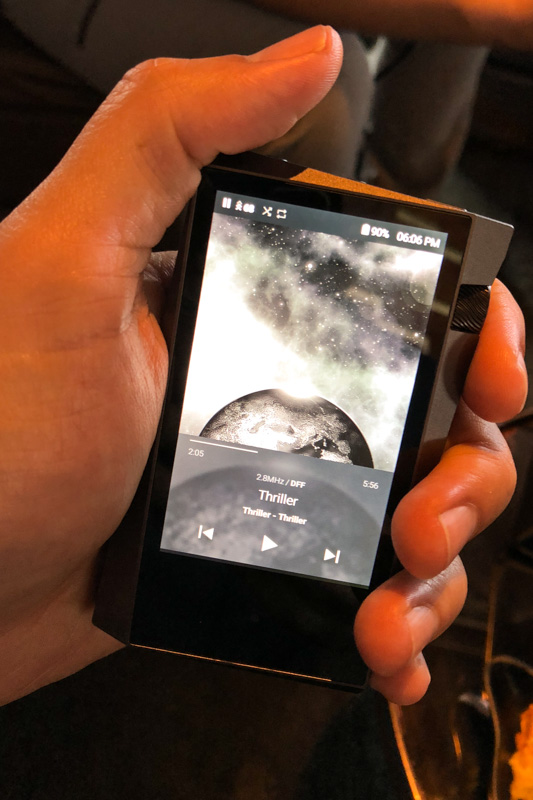 The 3.3” WVGA TFT LCD isn’t as brilliant as the SE100, but certainly provides a vibrant enough display for indoors and outdoors use. This is designed to sit at an angle such that the display is upright when you hold it in your hand, as you’ll see in the picture above. It measures just 57.5 x 99.7 x 16.1mm and weighs just 154g.We personally like the way it fits in your hand, though we’re not sure if having the display at an angle truly makes that much of a difference. Like the SE100, the SR15 features an aluminum body with an elegant glass-back that shows off a design of interconnected rectangles. Depending on the way the light hits the back, the reflection reveals and conceals different parts of the design, creating a nice three-dimensional effect.

For this player, we started our brief audition with a familiar piece – Rebecca Pidgeon’s rendition of Spanish Harlem – and were impressed by the resolution the player was able to produce. The highs in this piece come mostly from the piano parts, and these were expertly picked out. We thought there was good depth to the piece as well as a nice balance between the highs and lows; not something many DAPs can do.

Moving on to a recording of Come Together by the Beatles, we were again impressed by the naturalness the player was able to produce with the vocals. This track is led by a consistent drum riff, and the player brings an energy to the performance that gets your feet tapping.

Finishing off our audition with the fast moving jazz piece Take Five by the Dave Brubeck quartet gave the player a chance to show off its ability to handle rhythm and pace. The frenzied cymbal work is matched perfectly by first Brubeck’s piano playing, and then later Paul Desmond’s alto sax and Bull Ruther’s bass. It seems the SR15 has a slightly more intimate soundstage, making you feel like you’re right at the recording studio watching these greats play.

For the price point, it certainly seems like Astell&Kern have another strong option in play.

The A&norma SR15 will be available in July 2018 at AV One, Connect IT, E1 Personal Audio, Jaben, Music Sanctuary, Stereo Electronics for S$999, while the A&futura SE100 is available now at the same outlets for S$2,499.