The Pixel 4's specs are pretty much par for the course for a flagship phone in 2019, although they can hardly be described as class-leading. For one, there are already phones with the newer Snapdragon 855+ processor, such as the OnePlus 7T, but the Pixel 4 is still using the Snapdragon 855, which was announced in late 2018.

Compared to the Snapdragon 845, the Snapdragon 855 is supposed to deliver a 45 per cent improvement in CPU performance and a 20 per cent boost to GPU speeds with the Adreno 640. It's built on the TSMC's 7nm process and features a total of eight cores in the following arrangement:

This configuration is based on ARM's DynamIQ cluster technology, and it's slightly different from the older big.LITTLE design, allowing for individual cores to be better tailored to more specific performance requirements.

There's 6GB of LPDDR4X RAM, but the Samsung Galaxy Note10 and Huawei Mate 30 Pro both come with 8GB. Meanwhile, the Galaxy Note10+ and select models of the OnePlus 7 Pro have 12GB. The point is that the Pixel 4 looks like it's lagging behind on paper, even if day-to-day operation still feels buttery smooth. On top of that, there's the problem of storage, and the phone comes in only 64GB and 128GB flavours.

The Pixel 4 and 4 XL did reasonably well here, beating out most of the tested Android devices, including heavyweights like the Galaxy Note10+. The one exception is the OnePlus 7 Pro, but even that was way behind the iPhone 11 and 11 Pro, and even last year's iPhone XS Max. 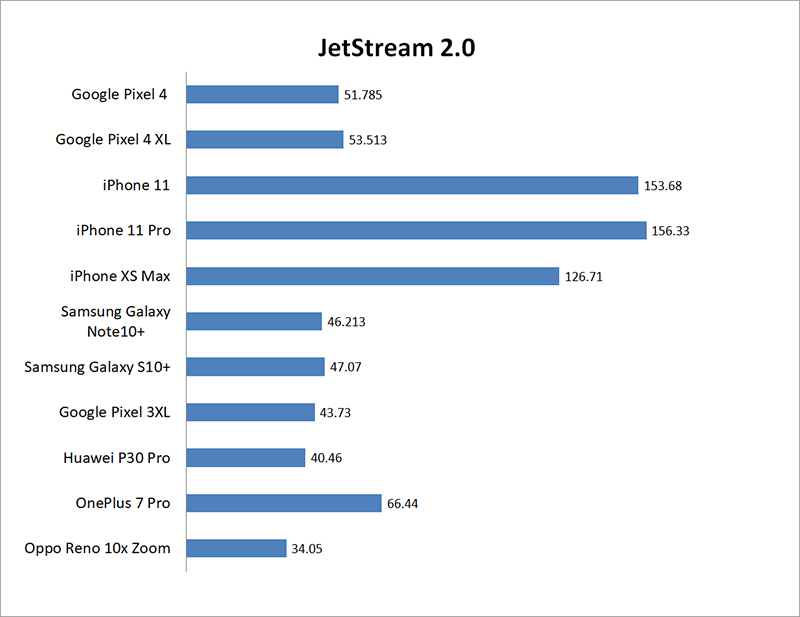 The Pixel 4 also has a good showing here, coming the closest to challenging the iPhone 11 and 11 Pro. In fact, the iPhone 11 Pro was just 7 per cent faster than the Pixel 4 XL. The latter was in turn 14 per cent quicker than the OnePlus 7 Pro, which was the top-performing Android phone in this benchmark previously. Oddly-enough, the Pixel 4 XL lags slightly behind the Pixel 4 in the single-core benchmark, but it exceeds it in the multi-core score. Overall, both phones manage to stand their ground compared to the Samsung flagships, and the Pixel 4 XL is roughly 18 per cent quicker than the Galaxy Note10+. That said, Apple's iPhones still have the undisputed lead, and the Pixel 4 was nowhere close to challenging them. 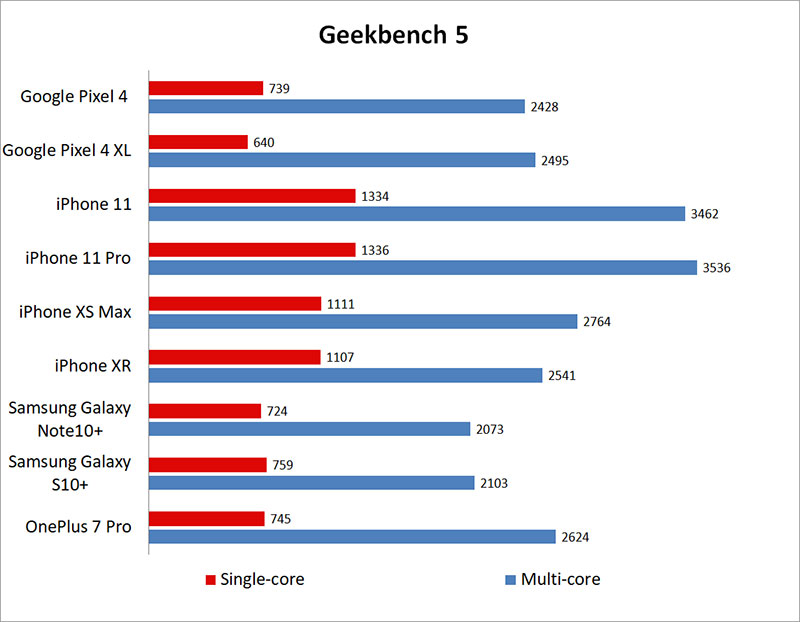 The Pixel 4 and 4 XL are again among the top-performing Android devices here, losing out only to the OnePlus 7 Pro. The iPhones are still way ahead though (including last year's iPhone XS Max and XR), and the iPhone 11 Pro was a whopping 63 per cent faster than the Pixel 4 XL. However, even despite the increase in battery capacity on the Pixel 4 XL, it's still clear that it's still significantly smaller than on the other Android flagships. As a result, battery life results lag behind many of its rivals, with the Pixel 4 XL lasting a good 95 minutes less than the Galaxy Note10+. Conversely, the OnePlus 7 Pro, which also has a 90Hz display, lasted 189 minutes longer, so you can't entirely blame the Pixel 4 XL's shorter battery life on the higher refresh rate screen.