Jelly Bean, For Butter Or Worse

Well, Google has certainly pulled a fast one on us. With very little revealed about the Jelly Bean 4.1 update prior to the Google I/O event, we were expecting it to be pretty incremental in nature (blame it on the 4.x namesake). That doesn't seem to be the case, however - there are a couple of nifty features that will built upon what was introduced in the Android 4.0 (Ice Cream Sandwich) user experience. 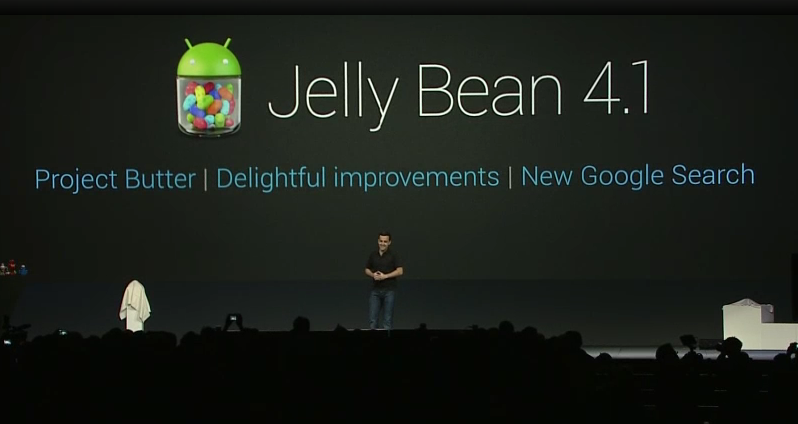 While Android 4.0 focused strongly on unifying the tablet (Android 3.0 Honeycomb) and smartphone experience, Jellybean focuses on strengthening the user experience and usability on the user interface while leveraging on their existing database of information - the two-pronged strategy results in updates to its predictive typing, photo viewing/deleting, offline voice typing, voice search and Google Now. These updates will play a bigger role as Android devices hit 400 million activations today - a huge jump from 100 million last year -, averaging at about 1 million new activations per day and 12 per second. Without further ado, here are the updates that will be coming on Android 4.1, codenamed Jelly Bean. 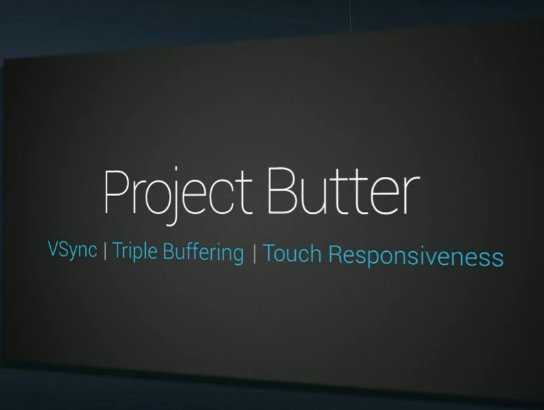 To counter the perceived lag often seen in previous versions of Android, Google has embarked on "Project Butter", a processing framework. Dave Burk, Android Engineering Director, Google, talked a little about this project, which is aimed to make the Android experience smoother, more responsive, and faster. For example, in Jelly Bean, touch accuracy and responsiveness will be greatly improved, as the OS will anticipate where your finger will land next. And after long periods of inactivity, the OS will ramp up the CPU for the next touch event, so as to minimize any lag. By using "vsync timing" across all drawing and animation, a consistent frame rate (up to 60fps) can be achieved. Graphics also get triple buffering to achieve better rendering performance, be it scrolling or animations. This buttery experience is sampled via a video filmed by a 300fps high-speed camera that shows the difference in responsiveness between Ice Cream Sandwich and Jelly Bean. 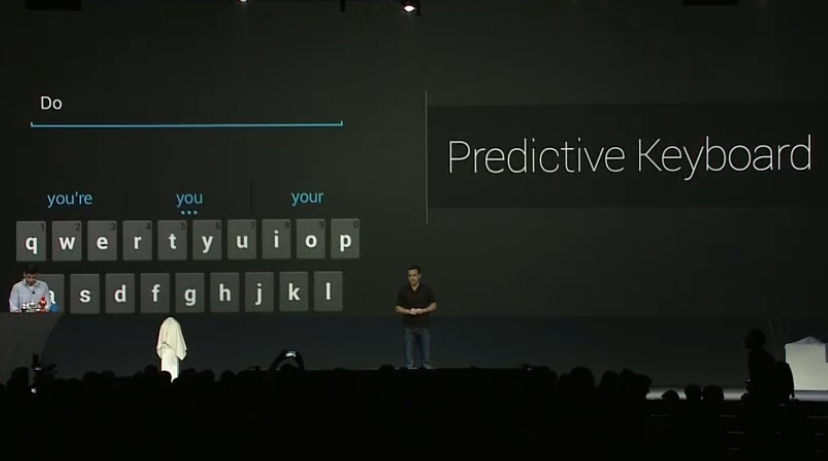 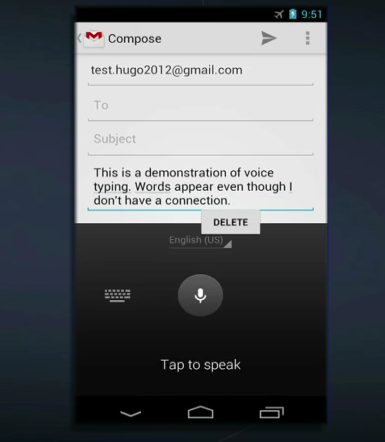 A refined dictionary and an improved predictive keyboard will speed up typing, and there's expanded language support, including Persian, Hindi, and Thai. There's also support for Braille. But that's not all. Jelly Bean will feature a new offline voice typing feature - you can type with your voice even without a working connection - and this will be launching with US English first with more languages to follow later. 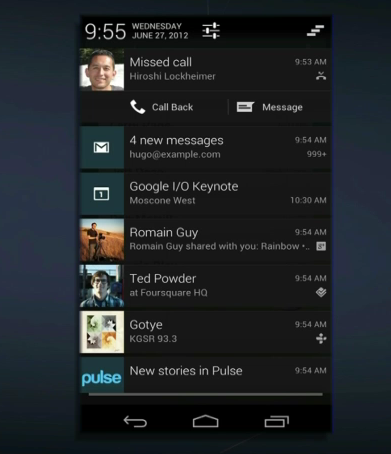 Android users have always cited notification experience as a strong advantage the mobile OS has over the competition. Jelly Bean looks to go an extra step by adding a couple of touches that will make it easier for users to get to where they want, and what they want to do in fewer steps. The notifications tray will spot a new look with more information and features; take for example, you will be able to call back or message straight from the notifications tray when there's a missed call. 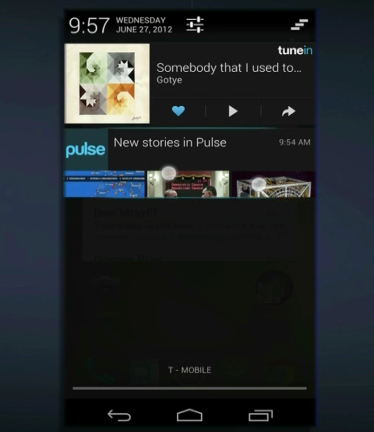 Users can also take a quick look at updates on apps without having to go into the apps - the information can be selectively viewed by opening and closing it with a two-finger swipe. Developers can also create actionable notifications with interactive controls. 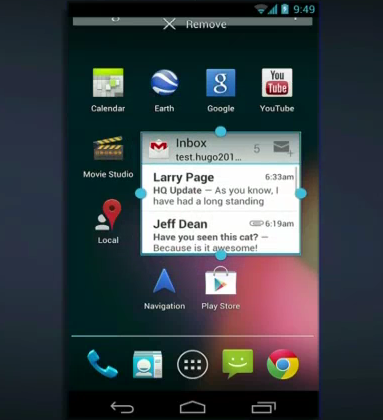 Widget placement and removal will now be made much easier with the Jelly Bean update. The new OS will intelligently resize your widget if there's not enough space to contain it, and move the icons automatically if they are in the way. You no longer have to long-press your widget or icon to trash it - simply swipe unwanted items off the home screen to get rid of them. Icons will also now auto-arrange themselves, adding another level of convenience to decorating your home screens. 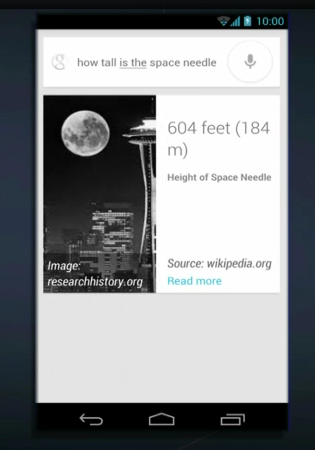 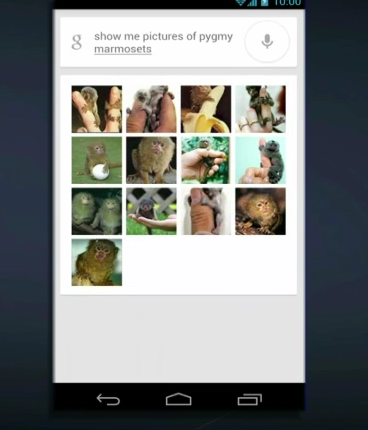 Harnessing the power of its existing Knowledge Graph - simply put, it is "a huge collection of the people, places and things in the world" -, Google Search will be much intuitive and fluid. Responses will be shown on answer cards - and this extends to their newly-introduced voice search assistant which is rather similar to Apple's Siri or Samsung's S-Voice. Simply ask Google a question (searching for images is also possible, as seen from above), and infographic-style answer cards will also be shown. 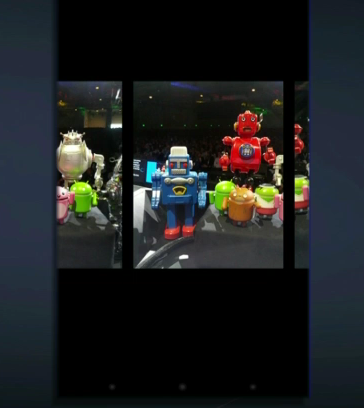 To add on to Ice Cream Sandwich's fast image capture, Jelly Bean enhances the experience by making it much easier to view, delete, and retrieve deleted photos. On previous Android builds, users have to move in and out of the Gallery app to view photos; on Android 4.1, you simply pinch while viewing photos to activate the film strip view feature. This will enable users to view your photo roll quickly by swiping left or right. Similarly, swipe up or down to delete any photo. Another good thing is that deletion can be easily undone, so there's no worry of accidentally deleting a precious shot with no chance of retrieval. 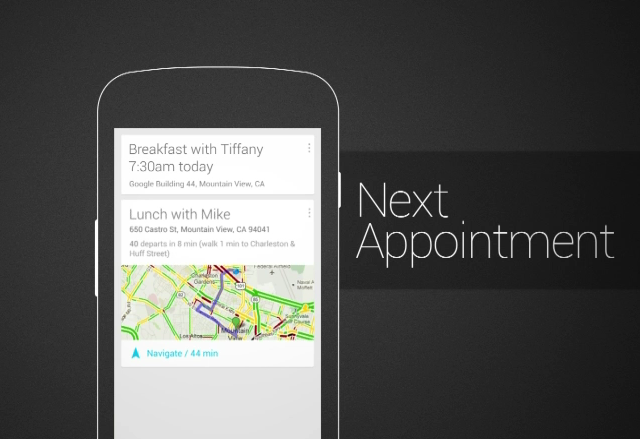 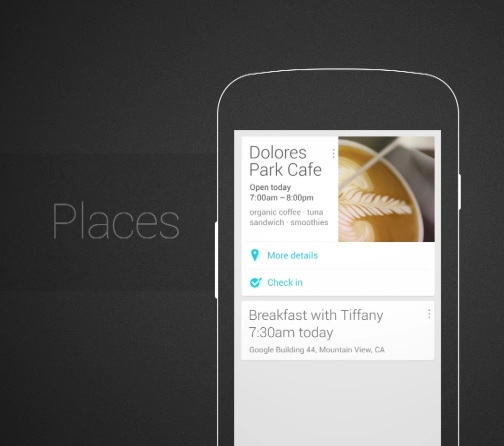 With Jelly Bean, you get an entire new service called Google Now. Think of it as a personal assistant of sorts; the feature uses personal data in your smartphone to retrieve helpful and informative data to help you in your day-to-day life. This combination will aid you in different areas of your life - for example, it can provide public transit information when you are close to a station, update you on sports teams in real-time, study your commute habits and retrieve location data like restaurants, and so forth. Check it out in the video below:

Google Now extends its intelligence even to flight details - it will update flight details with terminal and gate information as you are about to board your flight. It doesn't just stop there - while in a foreign country, it will offer helpful information on currency exchange, and so forth. 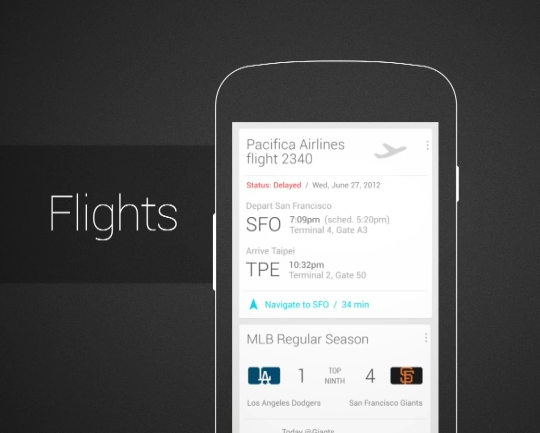 So how do you go about accessing this pretty intelligent and self-aware service? There are two ways to go about doing it - you either swipe up from the bottom of the screen, or tap on Google's search box. Like Google search/Voice search, the responses and information are presented in cards. By searching more and allowing it to collate more information about yourself, Google states that these cards will improve in personalization and accuracy in its responses. The search giant has also promised to include more types of cards in the future.

The Android 4.1 Jelly Bean update will be available in July with the developer SDK ready for download now at developer.android.com. The devices that will get OTA updates first in mid-July include Galaxy Nexus, Nexus S, and Motorola Xoom.