Computex 2016 is still over a month away, but it looks like Gigabyte is already waiting to burst out of the stables. The company surprised us yesterday with teasers as to what to expect in June, when the world’s technorati flock to Taipei for one of the largest computer and technology expos.

Unfortunately, there’s no shiny new platform waiting to be unveiled in the wings. Even though Intel is expected to launch Kaby Lake – Skylake’s successor, but really just a refreshed 14nm chip – toward the end of the year, the chipmaker isn’t going to be releasing a new chipset in 2016. The ‘tick-tock’ manufacturing cycle has officially been thrown out the window, and it looks like we’re also stuck with the Intel Z170 platform for another year.

As a result, board manufacturers have instead taken to refreshing their motherboard line-ups with new features, in a bid to add more value and appeal to consumers on the upgrade cycle.

Gigabyte didn’t provide us with a whole lot of details, but it did talk enhancements ranging from usability and aesthetic improvements to performance upgrades. 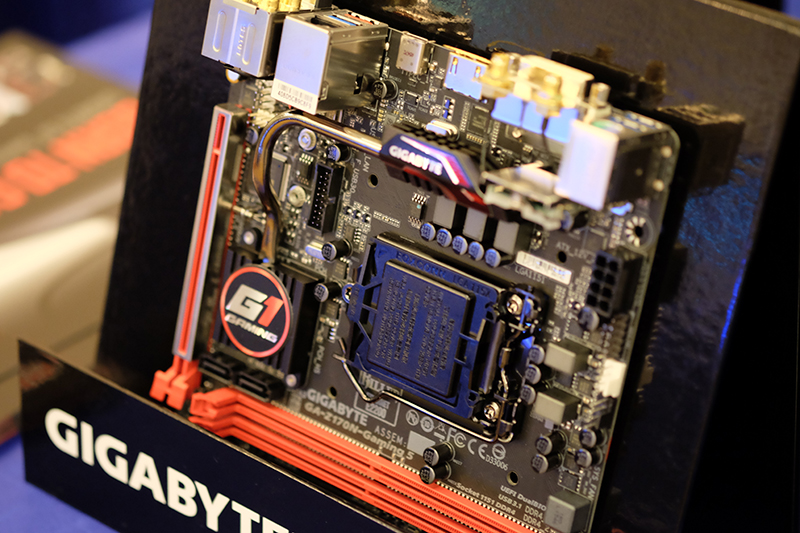 Gigabyte will be rolling out new Intel X99 motherboards for Intel’s upcoming 14nm Broadwell-E processors. It highlighted a new breed of three-way X99 boards that will work with both 28-lane and 40-lane CPUs, and will enable you to run up to three GPUs in x16 mode each. However, Gigabyte didn’t provide the specifics as to how exactly this will work, and we’ll probably have to wait till the actual announcement to find out. Still, this is good news for enthusiasts if it pans out, because they’ll now be able to maximize the performance of multi-GPU setups.

On top of that, Gigabyte cited support for three NVMe SSDs in RAID 0 on its upcoming Intel Z170 boards. It’s claiming sequential read speeds of around 3,300MB/s, and it even had a demonstration with CrystalDiskMark scores on hand to prove it. Boards like the ASRock Z170 OC Formula already support triple NVMe M.2 SSDs in RAID 0, but Gigabyte intends to offer greater flexibility by supporting a wider range of drive form factors, for instance the 2.5-inch and PCIe add-in card versions of the Intel 750 series SSDs. 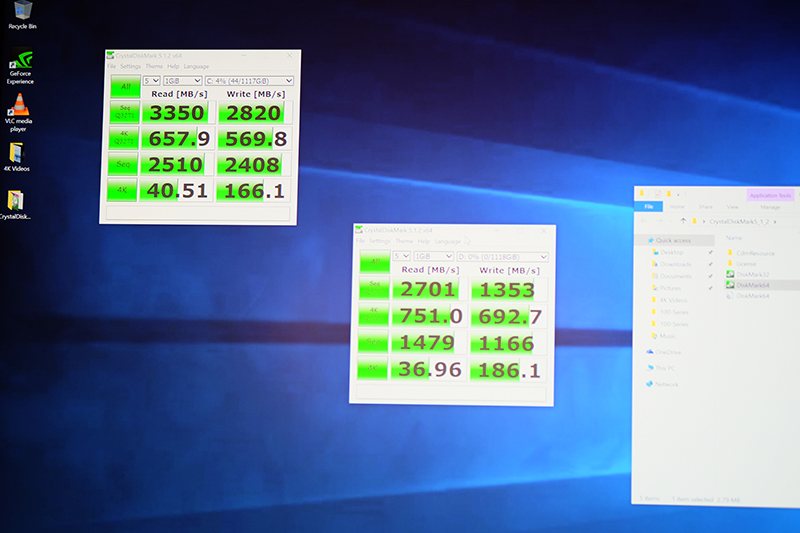 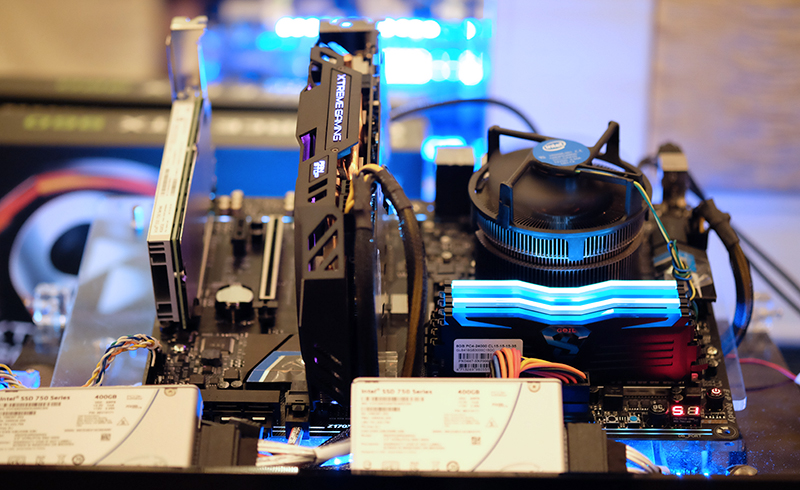 Then there’s something called ‘Dual Armor’, which appears to be an enhanced version of the current metal reinforcements found on the PCIe slots of certain Gigabyte boards. This time, it looks like Gigabyte is extending the feature to the DIMM slots. However, the primary benefit probably still lies with the PCIe slots. Other than protecting the slots from being damaged under the weight of heavy cards, this reduces the chance of you accidentally yanking the card out and damaging the slot when you forget to release the latch.

And since these are enthusiasts and gamers we’re talking about here, no board refresh would be complete without snazzy new lighting features. The new Intel X99 and Z170 boards will both feature full RGB LEDs that can be customized according to your liking.

There’s even room for one final value-added feature – dual dedicated PWM water pump headers. This lets you control the pump speeds from within the BIOS itself, instead of having to make do with one of the case fan headers. Gigabyte also took some time to talk about how it is catering to content creation professionals who favor Intel Xeon processors and NVIDIA Quadro or AMD FirePro graphics cards. Intel’s naming scheme for its new Xeon chipsets isn’t exactly the easiest to remember, so Gigabyte opted to slap its own X150 and X170 tags on its workstation motherboards.

We’ve already seen one of these boards in the Gigabyte X170 Extreme ECC, which also happens to be the world’s first Intel C236 motherboard to receive Thunderbolt 3 certification.

The company detailed features that set it apart from more consumer-focused chipsets. For instance, Gigabyte has included a range of I/O options for various use cases, namely, support for SATA Disk-On-Module storage, the industry-standard 5-pin PMBus connector that allows communication with the PSU on its status, and SGPIO connectors for third-party SGPIO backplane boards or chassis.

Thunderbolt 3 is the future Finally, Gigabyte unequivocally declared that Thunderbolt 3 would be a major feature in all its products, including its Brix mini PCs. We’ll definitely have to wait for Computex for something a little more specific, but the company hinted at a comprehensive Thunderbolt 3 ecosystem that would include several accessories to extend functionality on Thunderbolt 3-equipped products.

It also dropped an interesting tidbit of information for us at the end. The Gigabyte Z170X UD5-TH is actually Intel’s official reference board for manufacturers building Thunderbolt 3 devices. Clearly, Gigabyte likes the idea that it is setting the standard here.