Getting to Know the Cloud-connected Microsoft Office 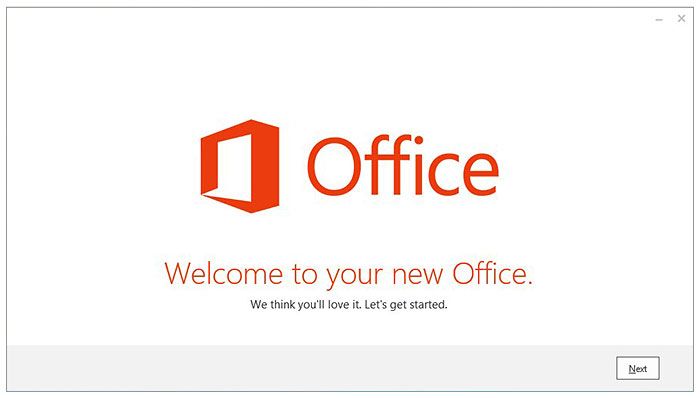 Welcome to Your New Cloud-connected Office

Previously, we’ve answered a lot of questions about the new Office 2013 suites and Office 365 subscription plans. We also walked you through the steps of subscribing Office 365 Home Premium online, and getting it installed on your computers. But before we dive into the marquee features in each of the core Office apps, let us spend a bit of time to understand the overarching strategy that Microsoft has chosen for its latest productivity software suite, and see how this has manifested in features across the apps (hint: it has a lot to do with the cloud).

A Cloud-connected Office Begins with SkyDrive

Like Microsoft’s latest operating system, Windows 8, the new Office taps heavily into the cloud to deliver some of its most impressive new features. At the very least, saving documents to the cloud allows you to access them, as well as collaborate with colleagues, family, and friends, wherever you are. In fact, to make Office connect more naturally to the cloud, Microsoft has now made SkyDrive the suite’s default save location. 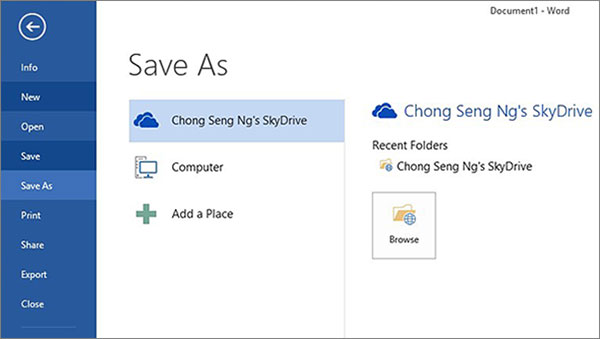 Now, many people have the wrong assumption that when they save a file to SkyDrive, it can only be accessed when they’ve an Internet connection. This is certainly not the case. If you’ve the SkyDrive desktop app, when you first save an Office 2013 document to SkyDrive, the app will also automatically start to sync the content between your SkyDrive and your local drive. By default, you’ll find these contents in the SkyDrive folder created at C:\Users\YourName.

In other words, even when you’re saving a file to SkyDrive, there will also be a copy stored in the SkyDrive folder on your device. And if you happen to open the local version, Office will automatically connect to SkyDrive to ensure that that’s the latest version. What if you’re offline? Well, you can continue to work with the locally stored file as per normal; the moment you go online, Office will upload any changes to SkyDrive automatically. 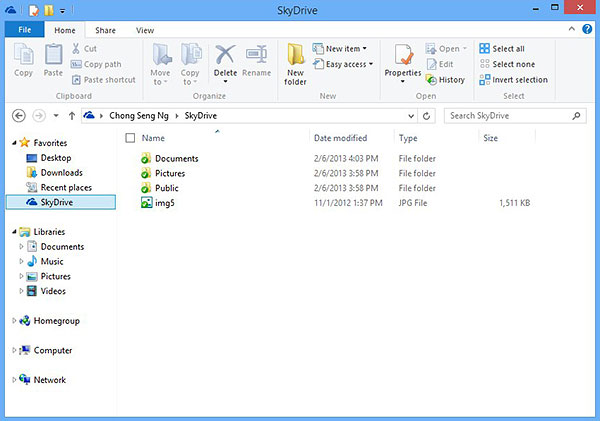 Another advantage of a cloud-connected Office is that not only do documents roam with you, so too are personal settings. Like how you setup your Windows desktop background and other default settings, you probably also have personalized Office settings (the Ribbon settings, the theme, the background art, etc.) that are to your liking. These settings are synced to your Microsoft account too, so that when you sign in to your account in Office on another device, they’ll be replicated on that device. You’ll feel right at home immediately. Remember too that for an Office 365 Home Premium subscription, these settings follow the signed-in Microsoft account, and not the main subscriber's account of the Office suite. In other words, as long as every member of the family signs in to Office with his or her own Microsoft account, he or she will get a personalized experience. 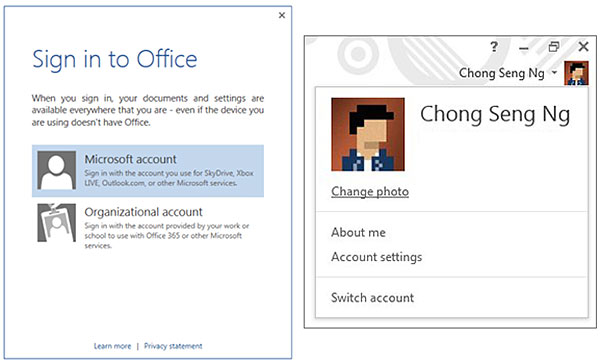 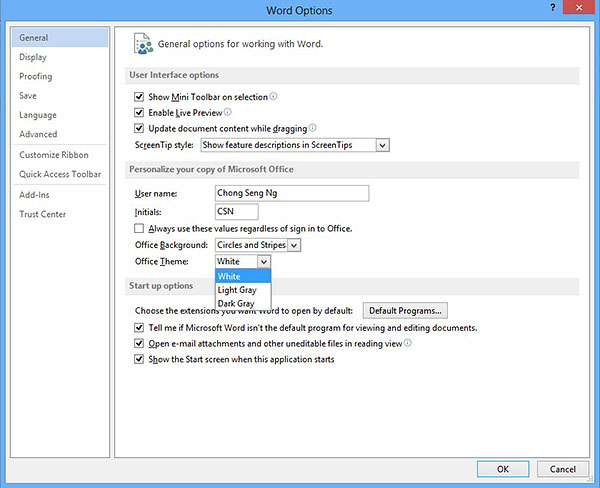 But wait! It’s not just Office documents and settings that you can store on the cloud; the whole Office is on the cloud. Besides the fact that you can get to your Office documents across devices and platforms, or on modern browsers through the free Office Web Apps, there’s a marquee feature that only Office 365 subscribers get called Office on Demand that lets you use Office apps on PCs you didn’t install Office on. Yes, you read that right.

Using Office on Demand is really easy, as long as you’ve a PC running at least Windows 7, and it’s connected to the Internet. Just sign in at Office.com, and click on the application you want to use under ‘Office on Demand’. Alternatively, click on the document that you want to continue working on; you can find them under ‘Recent documents’ or ‘Recent folders’. If this is the first time you're running Office on Demand on the current PC, an add-on will then ask for permission to download and install - just allow it. When that’s done, Office will try to run. Based on Microsoft’s Click-to-Run architecture, only the required parts of the Office on Demand app that you’ve selected would be downloaded and run locally on your PC. When you’re done with your work, simply close the app, and it’d go away. As noted before, your document would be saved on SkyDrive. Because there’s no need for administrative rights on the local computer, Office on Demand is a potential life-saver if you need to work on a document urgently on a public computer, such as those in Internet cafes and school libraries. 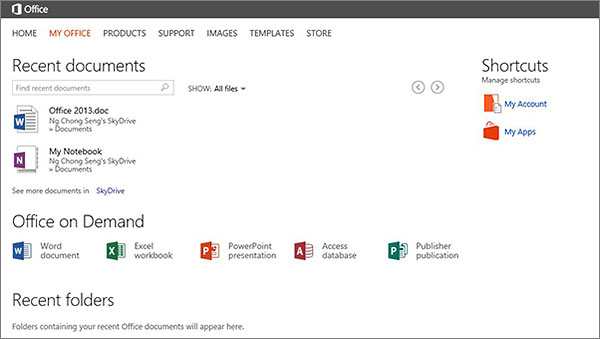 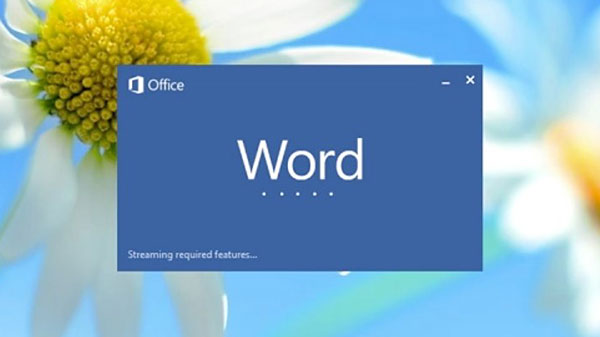 Social networking also gets a major boost in the new Office, particularly in Outlook and SharePoint (for business editions of Office 365). For the former, there’s improved connection with Facebook and LinkedIn, which means that you can now find and interact with your contacts more easily from one place; for the latter, you can follow people, teams, documents, and sites to keep abreast with the latest work-related happenings. Office 365 business editions also have tools such as multi-party HD videoconferencing in Lync. 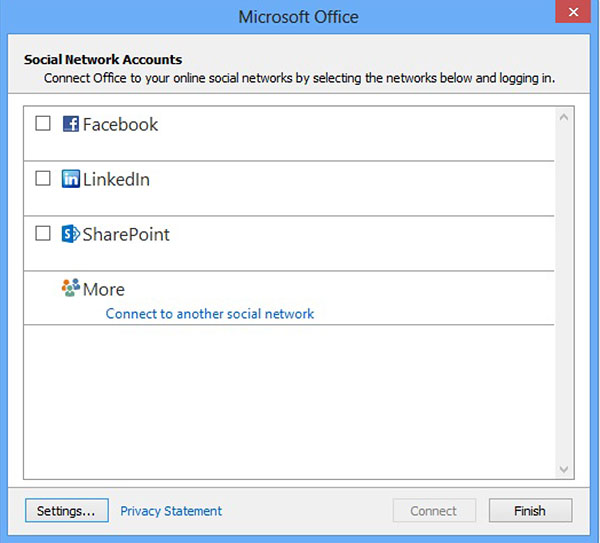 The Best Office Experience Is On Windows 8

Expectedly, to keep up with the new ‘Modern’ style interface that we now see in Windows 8, the new Office is also getting an interface makeover. Across the board, we see a flatter and less cluttered user interface, compared to previous versions of Office with their interplay of colors and shadows. And indeed, by keeping the styling simple (or ‘less chrome’, in Microsoft’s own words), it allows users to focus better on the real tasks at hand.

Also, it has to be said that while the new Office runs well on a Windows 7 PC, you get the best experience when it’s on a Windows 8 device. For one, Windows 8 has support for a wide variety of input devices and inking tools - keyboard, mouse, touchscreen, stylus - you name it. With neat little touches like suggestions when you mistype a word and keyboard layout that automatically adjusts to the language you choose, Windows 8 rids many of the annoyances associated with a touchscreen keyboard. All the new Office apps also have a Touch Mode which spaces controls a bit further from one another so that it’s easier to hit the desired touch targets with your fingers. 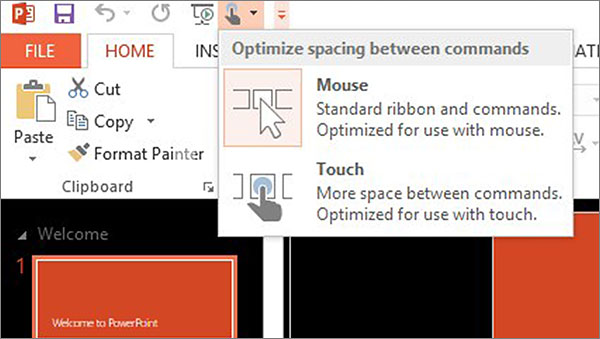 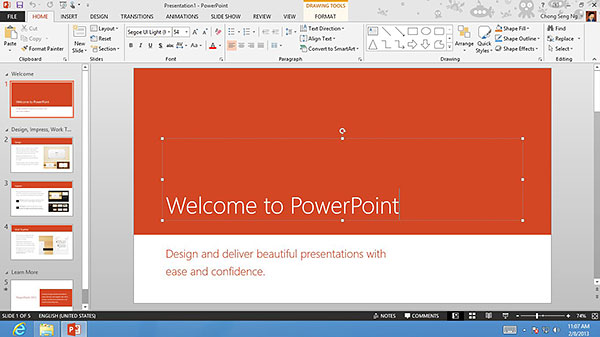 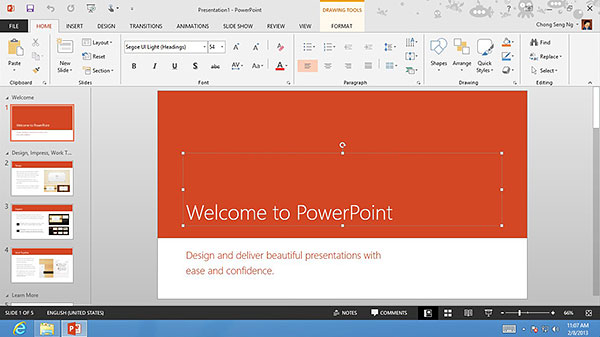 All that said, the core apps of Office 2013 (such as Word, Excel, PowerPoint, and Outlook) are still very much desktop apps, which means they still run in the PC's desktop environment. (At the moment, the only exceptions are OneNote and Lync.) This may seem to go against Microsoft's own push for Modern-styled, Windows Store apps; but Office is after all such as a massively complicated product that it'd take a while for parts to be rebuilt and features re-imagined (for example, how to integrate Office with Charms and contracts in Windows 8) before we see the Modern versions of Word, Excel, PowerPoint, and Outlook.