Get Familiar with PlayBook OS 2.0

Get Familiar with PlayBook OS 2.0

At long last, Research in Motion did what should have been done from the very day the BlackBerry Playbook was launched - providing native email support for its tablet.

Based on our initial impressions, PlayBook OS 2.0 has definitely added much more features to the BlackBerry tablet. This comes from a tighter integration to social networks on basic functions such as calendar, contact and even messages that made the PlayBook much more usable. The update, which allows the tablet to receive email and calendar updates without the need to connect a BlackBerry smartphone via BlackBerry Bridge, has made it much more independent. Even so, we've also seen BlackBerry Bridge been enhanced by turning the BlackBerry smartphone into a remote control for the tablet.

Nonetheless, will the OS update make a huge difference? While some might say "better late than never", in the PlayBook's situation, this update has added no distinct advantages against its competitors. Regardless, it is still an update that is worth waiting for. For those of you who own a PlayBook, you should have received the over-the-air update to Playbook OS 2.0 by now. If you’re not too sure about the improvements that came with this firmware update, we're here to help.

From new features, to settings that are somewhat hidden and a reminder of the shortcuts that were present since its first version, we shall explore and re-visit the updated PlayBook OS.

Setting up accounts for email, contacts and calendar

With native support for email and contacts, it’s time to get organized with the PlayBook. Before that, you’ll need to link up your accounts. PlayBook OS 2.0 supports a wide variety of email and social network accounts, from the likes of Google, to your Facebook, Twitter and LinkedIn accounts. On the home screen, click on the Settings icon on the top right corner. Navigate to Accounts, and select the account that you wish to add onto the PlayBook. You can add more accounts by clicking on “Add New Account” located at the bottom right corner.

Once that’s done, you can choose to synchronize specific items within your account, such as email, contacts and calendar. This is only applicable for your email accounts, because by default, all your Twitter, Facebook and LinkedIn contacts will be synchronized with the Contacts app within the PlayBook. As such, you’ll find an extensive list of contacts within the app, which can be quite a daunting list. 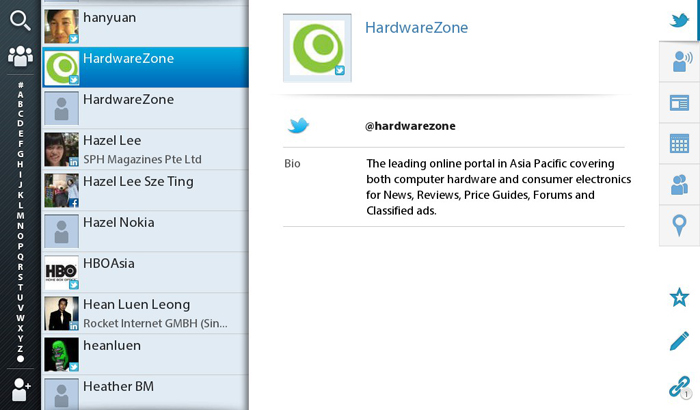 If you’ve just started up your Messages app, you’ll notice a string of conversations across your Facebook, Twitter and email accounts. To make it more manageable, you might want to group similar messages under a thread. 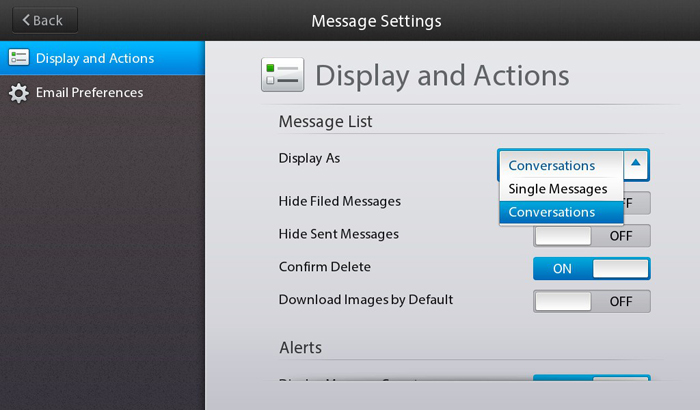 To do so, swipe downwards from the top of the screen within the Messages app. Select Settings, look for Display As and choose Conversations. This will group your messages from the same contact as a single thread.

If you are having trouble sifting through a long list of messages, you can filter through specific accounts. On the upper left corner, click on the account icon, located just below the search icon represented by a magnifying glass. This will bring up a list of accounts that have been added onto your PlayBook. Choose the account that you wish to view, and you’ll get the list of messages filtered to that account.

Clicking on the compose message icon on the bottom left will let you compose an email. If you wish to send a direct message through Facebook, Twitter or LinkedIn, click on the double arrow icon located just above the compose message icon. Choose the account that you wish to send a direct message across, send the message and it’ll be included in the list of threaded messages within the app. Much like its competitors, you can arrange the apps within the app menu by pressing and holding onto an icon until it pulsates. Drag the app across the menu until you’re satisfied with its location.

By default, you’ll have two pages of apps within the app menu. If you wish to gather all your apps to one page, drag the app towards the left to move to the first page, and then insert it to the right of the last app. If the page is seemingly full, you can still add more apps to the page by inserting it between two apps, which will push apps down to the next row. Alternatively, if you wish to loosen the number of apps within a page, just drag it to the right to create a new page to populate more apps. Folder support also comes to PlayBook OS 2.0, and this is done in a similar manner to the other operating systems. Simply drag the icon on top of another, and it'll be clustered together under a folder for you to name.

You can also select up to six app shortcuts, which will be listed regardless of which page you’re in. The same rule applies, just click and hold, drag the app icon to the top, and it’ll be parked within the shortcut bar.

One of the biggest update within PlayBook OS 2.0 is its ability to run Android apps natively. As such, you’ll notice a major update to the App World on the PlayBook, such as a revamped user interface. 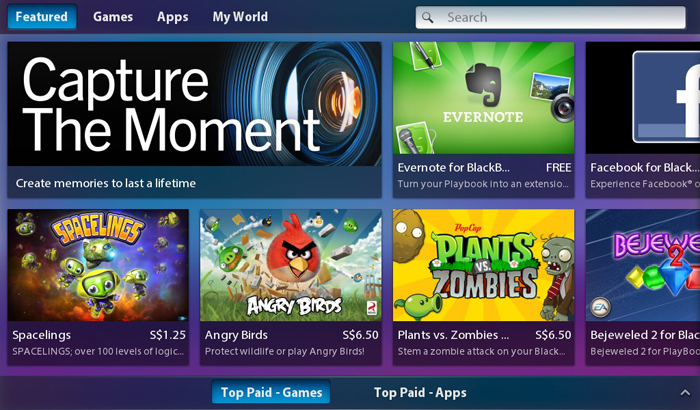 More importantly, the PlayBook OS 2.0 now supports Android apps, which means you should be seeing more apps available on the App World. According to RIM, the App World doesn’t differentiate between Android and PlayBook apps. On App World, you can probably find Android apps by searching for Android. Unfortunately, these app runs in the same instance with other Android apps. In essence, these Android apps are running within an emulator. As such, within the multi-task menu, you'll only see one instance of an Android app running. 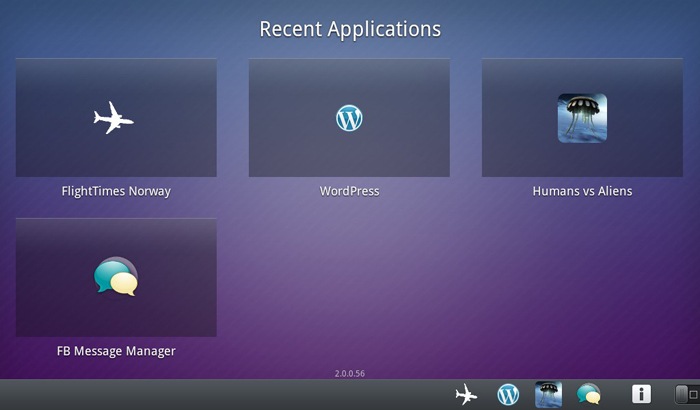 Of course, if it ain’t broke, don’t fix it. The same shortcuts that have been found on the first version of the PlayBook OS are still present. If you’re still unsure of the standard shortcuts, here’s a listing for you to look at: