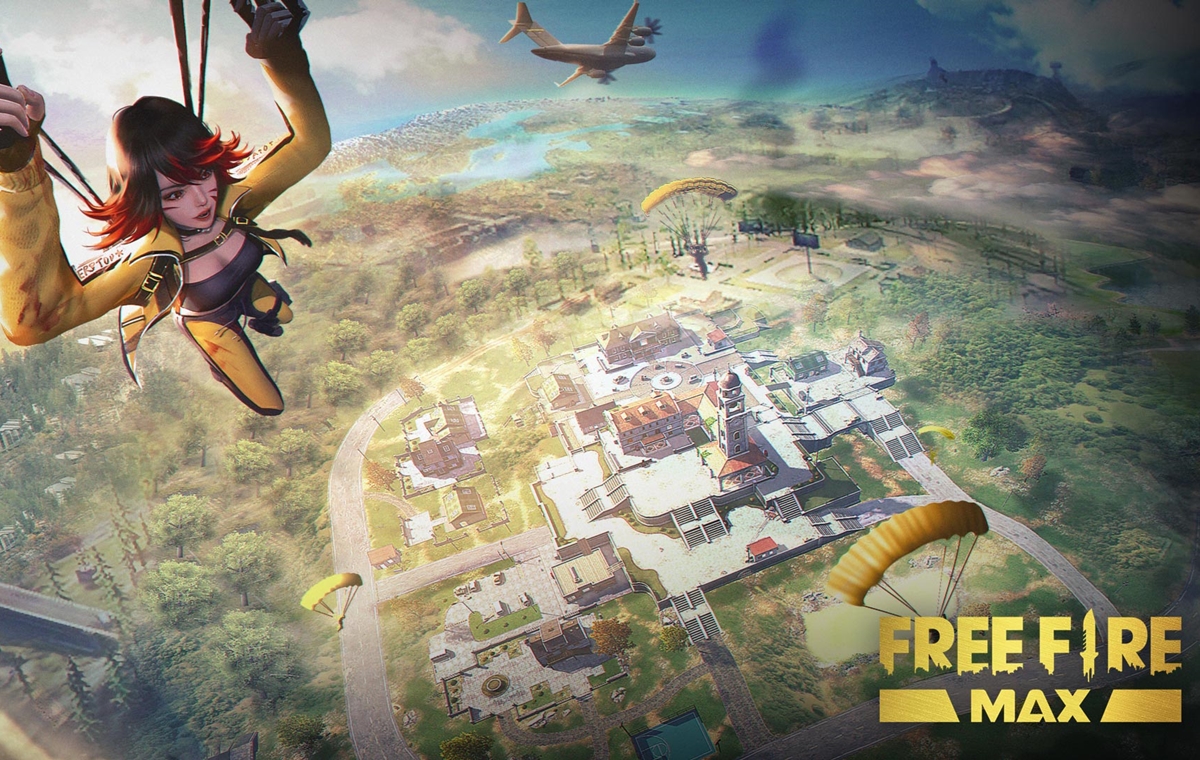 And so, I leap out of the plane, deploying my skateboard as I free fall through the sky. Around me, twelve other people do the same, though they soon release their parachutes and veer off in different directions. My eyes quickly scan my surroundings as I touch the ground, looking out for weapons, supplies and more importantly, enemies. From there, it was merely a matter of time before I took everyone else out.

Or at least, that's what I would like to happen, but reality has never seen eye to eye with me in this regard, and I end up dying just shy of reaching that top spot. #2 out of #60, huh? Salty doesn't quite cover my disappointment.

Still, battle royales were never really my cup of tea - dedicated FPS multiplayer titles are more in my area of expertise, and even then I don't sink that much time into them. However, credit should still be given where it is due, and I will admit that Free Fire MAX looks much flashier and plays better than I expected for a mobile title, even if it does have a few...awkward spots here and there.

To begin with, the updated iteration of Garena's popular Free Fire isn't shabby - it's actually one of the better battle royale titles I've tried out on mobile in terms of aesthetic quality and gameplay stability. The cosmetics are pretty appealing, and if you've dabbled in pretty much any battle royale game before, you shouldn't have much of a problem getting into the swing of things here.

So, deploy, scavenge, survive and win - that's pretty much it for the basic gameplay formula, and of course you can team up with your friends in both casual and ranked modes too if that's how you usually roll.

Aesthetically, the game takes a slightly different path from its rivals on the market. Unlike most other battle royales like PUBG Mobile and Apex Legends that focus on more militaristic getups and cosmetics, Free Fire MAX goes for more "casual" approach. Barring some seasonal items and packages, most of the characters you see in here will be dressed in modern streetwear like hoodies, jeans, sneakers and so on by default.

Granted, such an aesthetic doesn't quite gel with the context since you wouldn't expect an idol or parkour artist to suddenly sign up for a battle royale. It's honestly quite funny if you think about it, but that's just gaming logic for you, and I don't really mind because it's actually quite refreshing to see something apart from helmets and combat boots all the time. Speaking of cosmetics, though, there's just a little something I don't quite get about how they decided to monetise this aspect of the game, so let's get into that now.

To clarify: I'm no stranger to spending on things that look good, both in games and out of them. After all, as a gacha game player I throw wads of cash at JPEGs every so often, but at the very least I know that once I get them, they'll be there for me to use whenever I want to. Unfortunately, this doesn't seem to be the case for Free Fire MAX.

Apparently, the seasonal gun cosmetics in this game only last for a meager three days or so once their acquisiton tickets are activated, and it counts down in real-time too. So, not only will you have to sink in money to roll them out from the seasonal chest, but when you do finally get them, they're only going to be usable for the next 72 hours, following which you'll have to try and roll out another three-day ticket from the box.

And that's assuming you even manage to pull them from the box, to begin with.

Even by my standards, that's discouraging, and while this "limited-time" sort of business model isn't new to us, it is far less common than it used to be, so I'm really not sure why they've decided to utilise such a system here. Sure, you could say that it does encourage players to throw in money regularly - which is, admittedly, the point, it's not really something that I as a player might (and would) feel good spending on. After all, if I know that the money I sink into the game is only going to be relevant for the next three days regardless of whether I play or not, I think I'd much rather treat myself to a good meal outside, because the sense of "being rewarded" for paying real money just isn't there.

Still, the good thing is that this system only applies to gun cosmetics - character outfits, pets and accessories are permanent once you purchase them, so it's not like you're doomed to fork out three-digit sums every few days to keep these around like you would for the gun cosmetics. To be entirely fair, even in the latter's case, having to spend anything in the three-digit range operates on the worst case scenario - where you aren't able to acquire the desired item from a single purchase of the largest S$68.98 bundle, and as such decide to purchase another one. Naturally, it goes without saying that how much a player spends in-game varies from person to person, but we can't rule out that some unfortunate chap might have to entertain such a scenario.

However, if you don't fall into that category, it's as I've mentioned before - these outfits (and critters) certainly aren't half bad to look at, and equipping items during matches doesn't obscure them either - your character sprite will look mostly the same with or without any equipment.

Accordingly, the other option is to play without spending money at all (duh), and while you can still have a great time with it in this context, you might frown at the fact that Garena decided to give some of their paid-currency characters unique buffs in battle. Essentially, it's like the game is gating better competitive performance behind an wholly unnecessary pay wall, and I'm probably not the only person who's a little miffed here. For me, this concept of paying for character abilities in a genre that's fundamentally about rewarding tactical skill and decision-making simply comes across as counterintuitive at best.

Essentially, Free Fire MAX isn't bad, but it's definitely not fantastic either. In terms of gameplay, it checks all of the boxes that it needs to as a battle royale, and is easy for anyone to pick up and play, but at the same time it doesn't offer much else beyond that baseline, if at all. Even the one area where it stands out from other battle royales - its refreshingly casual aesthetic style is marred by characters having different buffs, which players actually need to fork out real money for.

The way they've monetised gun cosmetics certainly leaves much to be desired too, and I'd honestly be okay throwing money at them if they stuck around for good. In short, I think much of the game's potential is locked behind systems and features that didn't really need to be there, but given that it's still pretty new, they've got plenty of time to make changes.