Isaac Asimov's classic novel, Foundation, is considered the foundation (pun intended) of modern science-fiction and has been a major influence on other seminal sci-fi works. But its sheer scope and weight have made it a tricky beast to adapt for the screen. But that hasn't stopped showrunner and producer David S. Goyer and Apple TV+ from teaming up to bring the seminal sci-fi series to life in a new Foundation television series, which premieres today.

That’s not to say it was easy. Beyond having to figure out a way to squeeze the novels’ centuries-long timeline to suit the screen, which itself went through extensive rewrites, Goyer also have had to consider today’s modern sci-fi audience.

“I mean, that's part and parcel with adapting great works. The books exist. They're there, no one's changing them. The show is not the books. I think we all know that if the show is going to work. It's going to have to reach beyond the audience of the people that read the books, and it's going to have to be on the audience of people who even consider themselves fans of science fiction,” Goyer told media in a roundtable session. “Asimov himself knew that a Foundation wherever adapted someone would have to take liberties. The books are largely books of ideas of philosophy, a lot of important action happens off screen or in between sentences.”

Goyer went on to explain that when earlier people were contemplating adapting Foundation, they were trying to figure out how to distill everything down and how to compress everything. The beauty of a streaming show, on Apple TV+, is that he didn't have to compress anything.

“I mean, ironically, the first season, which is 10 hours long doesn't even take us all the way through the first book. So, instead of compressing things, we have this ability to expand upon it, and to fill in the gaps that Asimov left and that's a real gift,” Goyer add. “We have the luxury of time, and for example in the books, the sack of Trantor and the fall of the Empire actually happens off-screen, and I said to Apple, that's probably going to be an entire season for what is one sentence in the books. So that was generally the way that we approached it.” 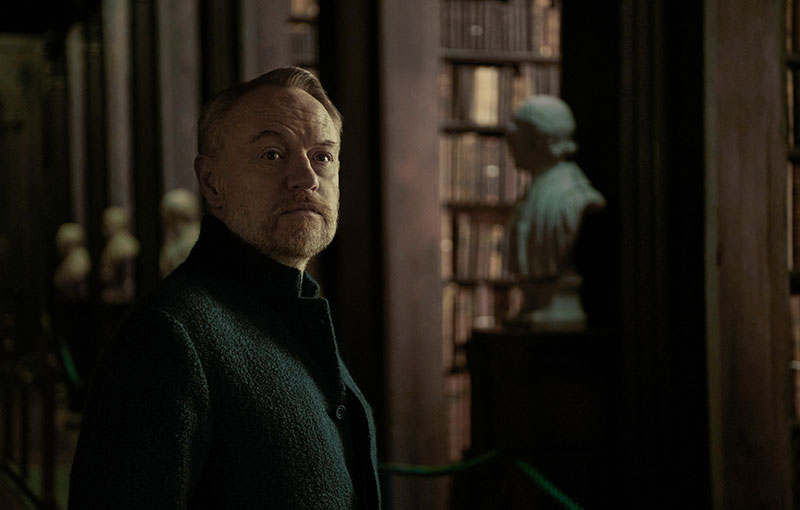 Jumping in to support Goyer’s comments, Jared Harris of Mad Men and The Crown, and plays the mathematician Haris Seldon in Foundation, put his faith in the writing quality of Goyer’s team.

“I knew immediately when I read those first two scripts that David and his writing team, they were in complete command of the story. They could feel that what they were setting up that there were some big ideas and big themes that they were taking a swing up,” says Harris. ”Then there was some beautiful, poetic stuff. I mean, one of my favorite passages in the whole series is the first three minutes of episode three.”

When asked how he approached the role, the actor said:

“I think the biggest challenge was that one doesn't lean on the character being a convenient expositional device. He's a properly functioning human being within the story with the same kind of jeopardy and fallibility as the other characters. I was curious about the things he didn't know, and David and I were rigorous about that rather than assuming that he knows exactly how people are going to react and how they're going to respond. That would have been extremely tedious. So, we made decisions about that and that allowed me to be alive in each moment of the scenes. Just as we are in life. I have no idea how the next five minutes are going to go, you know, I got some security about it. But we don't know for sure. So, you can be alive within the scene like that.” Lee Pace, no stranger to grandiose roles himself (King Thranduil in the Hobbit Trilogy and Ronan the Accuser in the MCU), relished a more humanistic approach in his role – as Emperor "Brother Day" Cleone.

“One of the things that I think is so fun about the character that I play, is that I'm not playing a man, I'm playing a series of men who, for a certain time in their life, take and inherit the role of the emperor of the galaxy, which is an absurd idea,” Pace said. “You’ll see in the first episode, how differently each of the three Cleon clones respond to Haris Seldon's math equation. Even though they're the same man, each respond differently to the idea that their empire is going to fall. I think it becomes a riddle about inherited power then, and what does power mean when the principle of change is the one thing you can bet on. One thing you can bet on is that things are going to change, which the emperor of the galaxy is desperate to prevent.”