The 2014 FIFA World Cup Brazil has begun, and not surprisingly, the most popular men's football event has been the biggest topic around.

On just Twittersphere, a whopping 12.2 million Tweets relating to the opening match (Brazil vs. Croatia) alone were generated worldwide. That's a lot of buzz, if you ask us. For a clearer picture as to how much its users interacted during the game on Twitter, watch its heat map here. 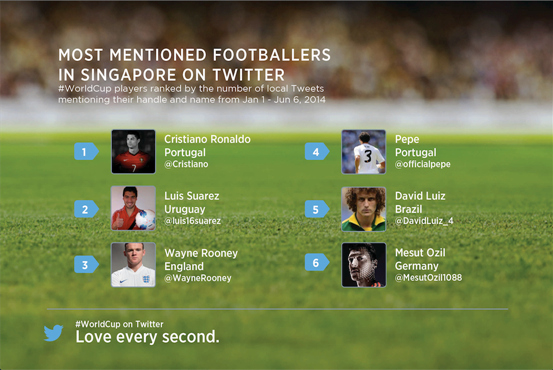 The social networking and microblogging platform also keeps you updated with the international tournament - simply search for (or tap on) #WorldCup or #WorldCup2014 to view them on Twitter's mobile app. Another highlight are #hashflags, which Twitter introduced in 2010. Just use a hashtag in front of the relevant three-letter country code (like #ESP for Spain), and that country's flag will appear after the text. 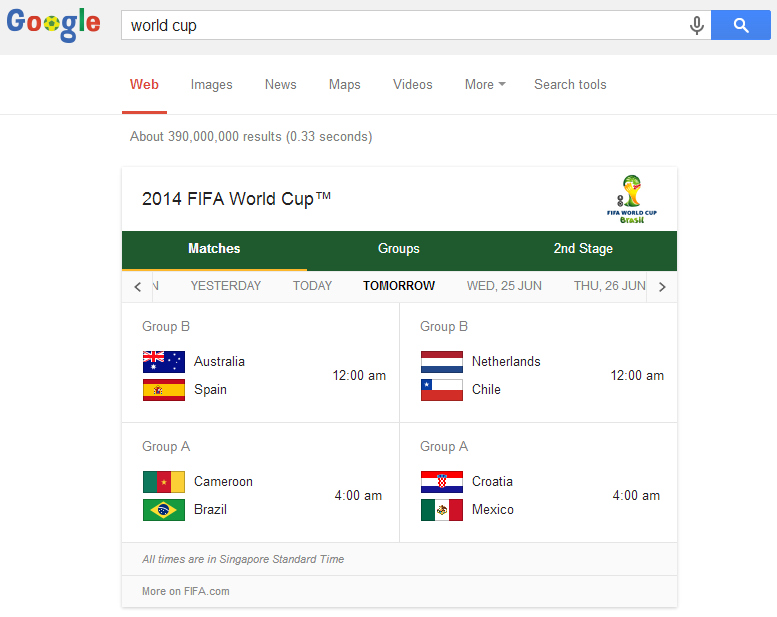 That's not all. Google is also upgrading your World Cup experience, regardless of which part of the world you're in. Very briefly, the most widely-used search engine allows you to view daily match schedules, live scores, team rosters, and major plays. On the move? Fret not. Google Now delivers match scores and updates via your Android or iOS device.

On top of this, Viber also released a sticker pack for football fans who are discussing the World Cup over the instant messaging app.

Apps to Keep Tabs on the 2014 FIFA World Cup 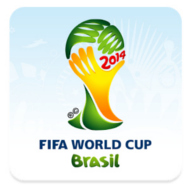 Get updated with news, standings, and schedules with the official app of the 2014 FIFA World Cup Brazil. Stay on top of the game with Powerade Match Alerts. Of course, you can turn these notifications off anytime under Settings. You can "subscribe" to any team besides the favorite team selected during the setup process (see screen grab below). You'll get notified in real time, with the starting lineup, goals scored, red cards (sending-offs), and more. 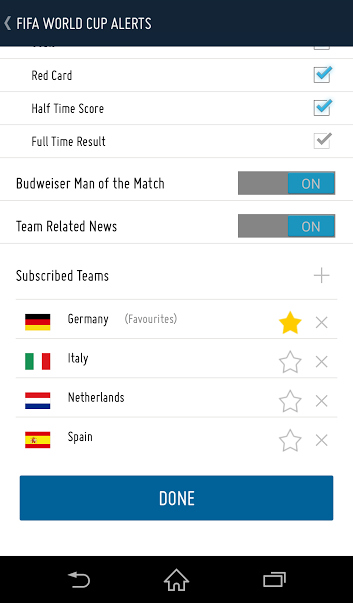 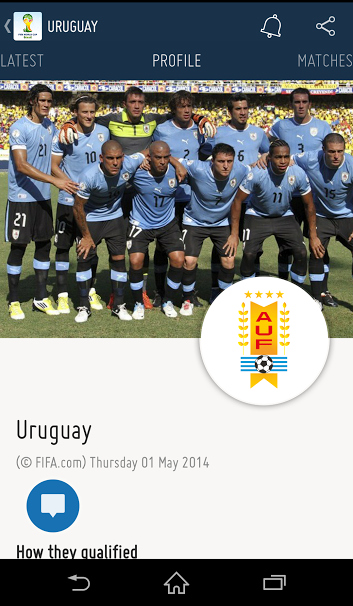 You can also check out a particular team's player profiles, match standings, coach, statistics, etc. (see screen grab above). There's also a Global Stadium you can enter before each match, if you want to catch the live coverage. Or, share news on to your preferred social networking service (SNS) to start a discussion. And if you ever get lost while using this user-friendly app, simply head to Settings and tap on "How to use the app". At the time of publishing this article, the FIFA app is available in Spanish, German, French, and Portuguese. 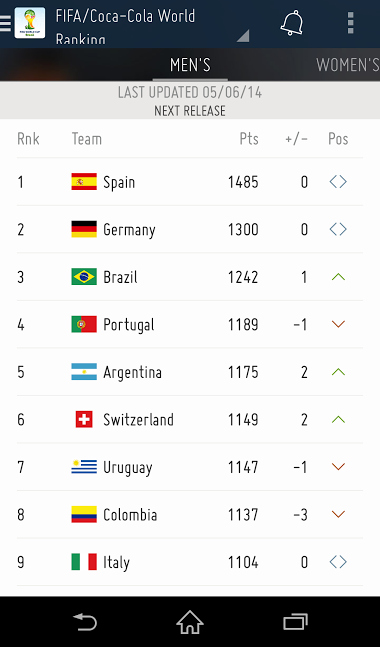 Updated at 1.23AM on 24th June: A world ranking feature has been added. Hit the FIFA logo on the top left corner of the app, and select "FIFA Ranking". The above screen grab shows the default Men's FIFA/Coca-Cola World Ranking. To see other rankings (Africa, Asia, Europe, N./C. America & Caribbean, Oceania, and South America), simply pick from the drop-down list (on the right of the FIFA logo). 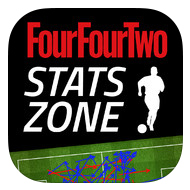 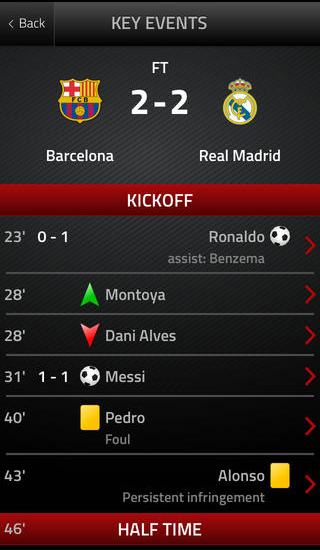 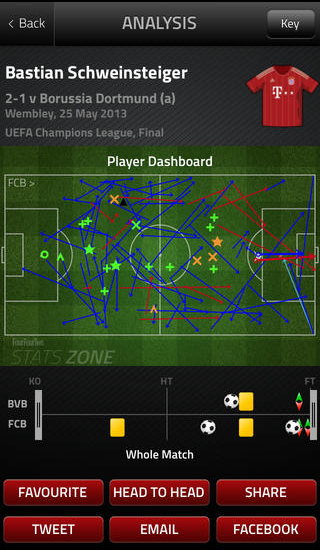 For the World Cup, the app delivers live match statistics, analysis, and lets you register for push notifications so you can be up to date with your favorite teams. You can also share analysis via the app (on Twitter and Facebook), or use it to build your Fantasy Football team. 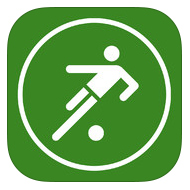 Formerly "THE Football", the developers at Onefootball have created a mobile app solely to cover the World Cup. Like the FIFA app, you'll be asked to choose a team during setup. You'll be brought to the team's "home" screen (see screen grab below) where you'll find the score of its latest match, along with up-to-the minute news. Get team-related game statistics or squad information by swiping from right to left. 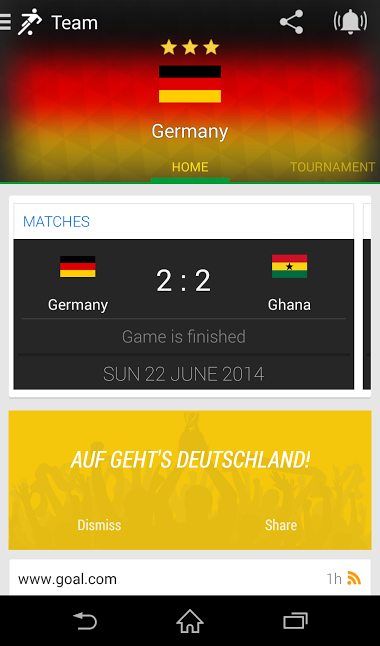 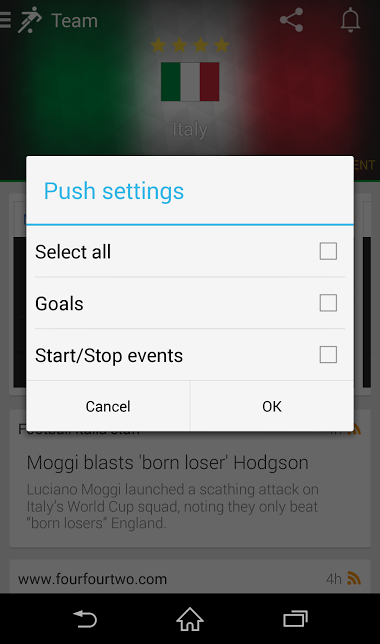 To get the scoop on other teams, hit the Onefootball logo at the top left corner and click on the team you want. If you want to get alerts for that particular team, tap the bell at the top right corner and make your selection(s) (see screen grab above). Also, this no frills app lets you share news from various credible sources (like FourFourTwo and goal.com) to your SNS. 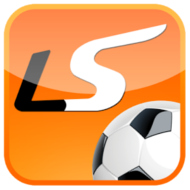 As its name implies, this fast-loading app serves up live scores as the goals happen, giving you a quick glimpse of who scored the goal (and if it's a penalty), time the goal was scored, who collected a card, when it happened, etc. You can change the refresh interval under Settings (second icon from the right at the bottom) anywhere between 30 seconds to 3 minutes, or disable automatic refresh if you like. 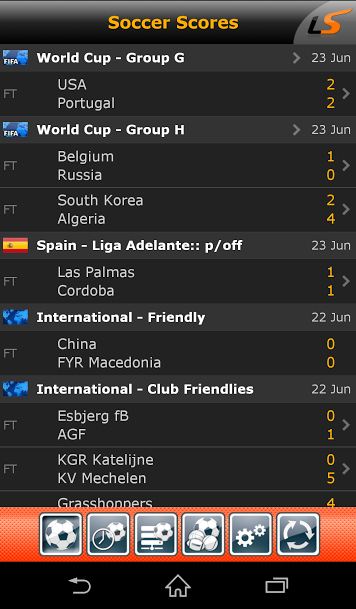 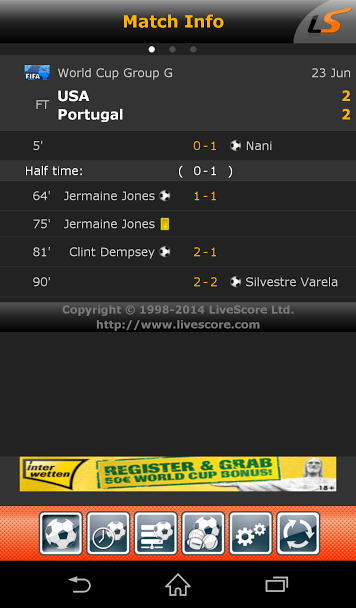 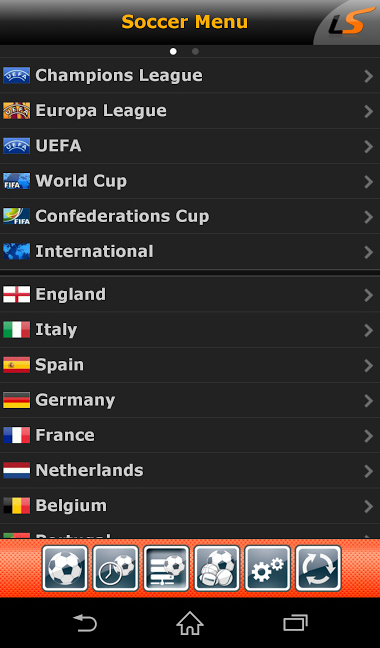 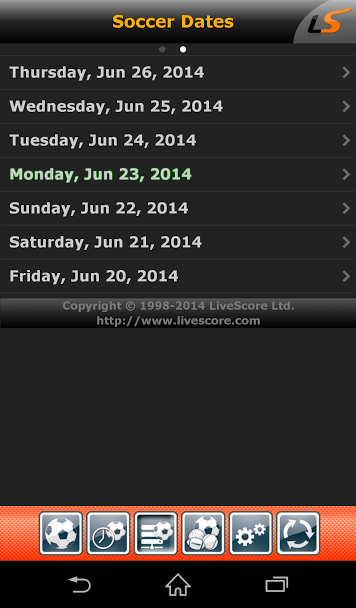 The good thing about LiveScore is that it's not World Cup-centric - meaning that you can continue to use it after World Cup is over. Just choose (third icon from the left in the same row) which competitions you'd like to focus on. Alternatively, you swipe from right to left to see all scores across all games by date (as seen in the above screen grab).

The refurbished Goal.com app offers real-time access to the latest goal.com content, including interviews, transfer gossip, videos, and more. Read in-match commentaries, and stay up to date with live scores and league tables. What's more - you get to pin your favorite articles to the homepage. 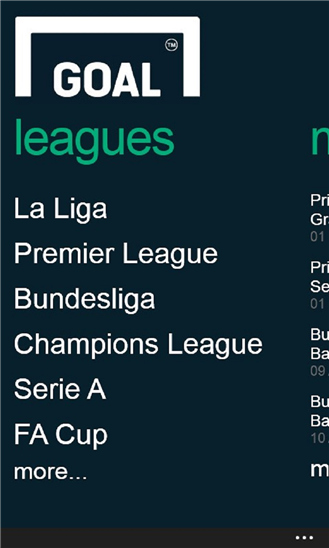 Select a (or a few) favorite club(s) to see team-related news and statistics, or post content directly to your Facebook or Twitter accounts. You can even change goal.com editions; if you select "Singapore (EN)", you'll be able to get the latest scoop on the S.league within a few clicks. At time of publishing, the app is available in 13 (Windows Phone platform), 18 (Android), or 16 (iOS) different languages.