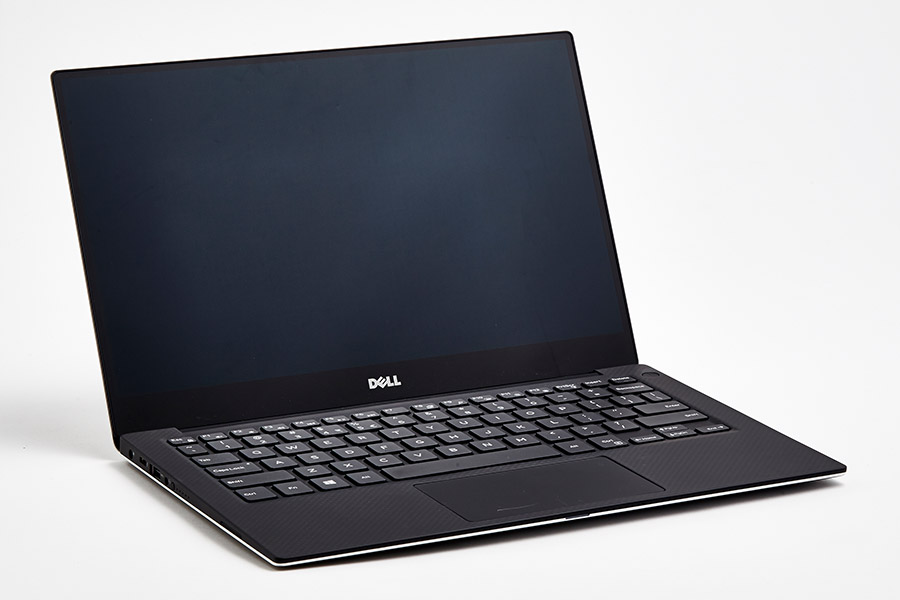 The 2016 Dell XPS 13 is arguably the most impressive ultrabook to look at. For starters, its CNC-machined aluminum body gives off a lovely silver-gray sheen that exudes an undeniably premium feel. We also feel inclined to call attention to the carbon fiber composite palm rest, which other than being really nice to look at, also has a pleasant soft-touch feel and is quite resistant to smudges. 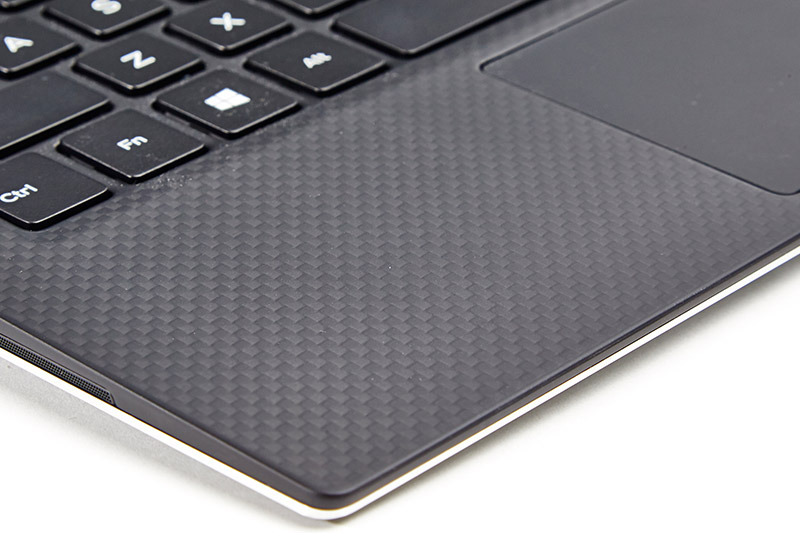 Upon opening the lid, you’re greeted by its gorgeous 13.3-inch edge-to-edge IPS display that boasts a resolution of 3,200 x 1,800 pixels. This is probably the best-looking screen out of all the notebooks tested here - the panel is flush with the bezel and images appear exceedingly sharp and vibrant. Of course, because of the glossy display, reflection is still an issue here, and you’ll have to notch up the brightness to mitigate the issue. 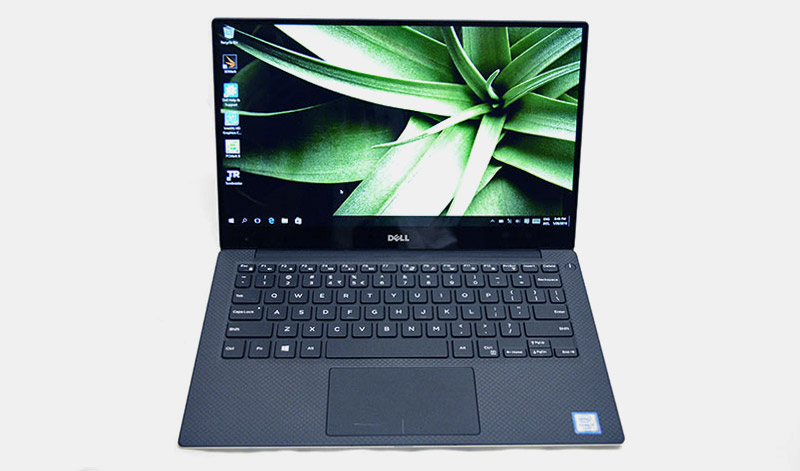 The thin bezel is more than just an aesthetic decision though, and it has actually enabled Dell to cram the XPS 13’s 13.3-inch display into the body of an 11-inch laptop. Other than being a really efficient use of space, this also means that the XPS 13 is essentially the smallest notebook in this review, which is saying quite a lot in a category of compact ultrabooks and convertibles. Measuring just 304 x 200 x 15mm and weighing 1.29kg, it is exceedingly portable and makes for a great traveling laptop. Furthermore, the XPS 13 just feels so well put together - the build quality is really impeccable - that we find it hard to think of anyone who would not be enamored with its design.

But because of the thin bezel, the HD webcam has had to be relocated to the bottom left corner of the screen. It’s a little unconventional and may possibly give whoever you’re chatting with a slightly unflattering view of yourself, but all in all, it’s nothing we can’t live with. 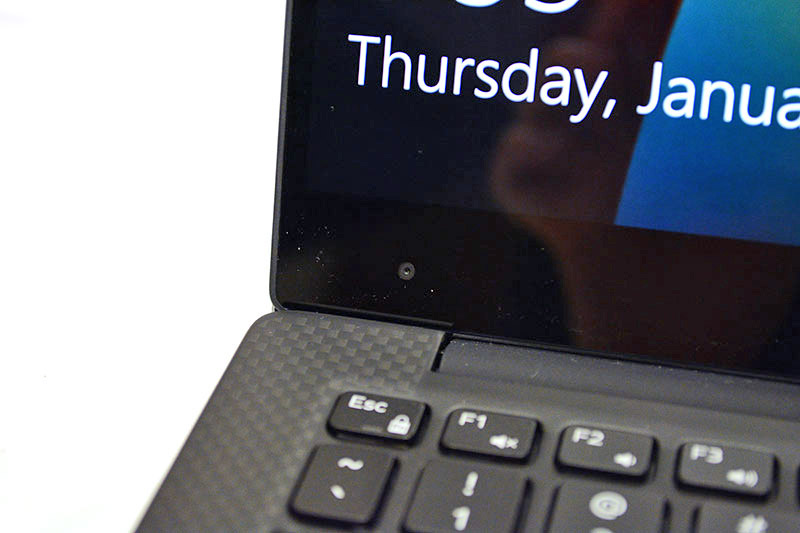 The ultra-high resolution display is also touch-capable, which gives you the convenience of being able to navigate via touch. But considering that the XPS 13 is not a convertible, this feature is more of a luxury than a necessity, and is no doubt part of the reason why the notebook costs as much as it does.

In addition, it has a decent-sized 56Wh battery, which helps it score points for mobility because its battery life was only second to the Lenovo Yoga 900, which has a larger 66Wh battery. On the topic of the battery, our review unit also came with an updated BIOS that Dell says provides battery life improvements in terms of hours (not merely minutes). However, we weren’t able to roll back the BIOS to an older version, so we had no way of testing this out. According to Dell, the old BIOS prevents the NVMe-based SSD from dropping down to lower processor C-states while idle but the new BIOS rectifies that, thus enabling the boost in battery life. The new BIOS is available for download on Dell’s support page, and the company is already in the midst of implementing it at the factory level so new customers will have no need to update.

It is powered by the same Intel Core i7-6500U processor (2.5GHz, 4MB cache) as the other Skylake notebooks. It is also equipped with 8GB of LPDDR3 RAM and a 256GB SSD as the majority of the competition, so Dell is clearly relying on the stellar design to help the XPS 13 stand out.

One other thing to note is that the XPS 13 doesn’t have any dedicated display outputs. Instead, it relies on the USB Type-C Thunderbolt 3 port to output over DisplayPort and HDMI. So yes, you’ll still be able to hook up to an external display, but you’ll need the right adapter. The Thunderbolt 3 port provides up to 40Gb/s of bandwidth, so you get USB 3.1 speeds using it too. The Thunderbolt 3 port is located on the left edge of the notebook, alongside the charging port, USB 3.0 port, and the headphone jack. Another nice feature is the presence of five-level LED battery indicators on the right edge of the XPS 13. Pressing the adjacent button will cause the LEDs to light up and show the current battery level in steps of 20%. It will even work when the notebook is powered off, so you can quickly check if you need to juice it up before taking it out. It will also glow amber when the battery level is low or critical. 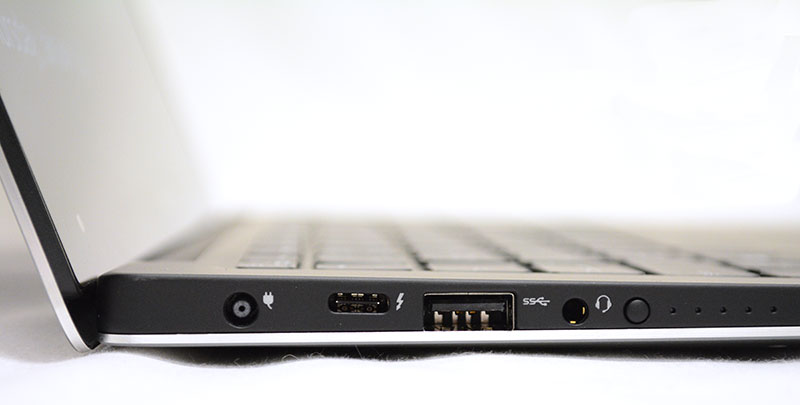 Moving over to the other side, Dell has included a second USB 3.0 port and an SD card reader. You can also see the Kensington lock slot, which will allow you to secure the notebook when you’re away from your desk. We can imagine that many of you will want to do this, seeing how much the XPS 13 costs. In addition, the USB 3.0 port here also doubles as a PowerShare port, which allows you to charge other USB devices even when the notebook is powered off.

There are no surprises when it comes to the backlit keyboard with island-style keys. Despite the smaller size of the XPS 13, key size spacing is well thought out, and we were able to type as per normal on it with no difficulty at all. Other notable features would be the inclusion of media key shortcuts on the function keys, so you can quickly pause or play music and skip through your playlist. The power button is also located right beside the keyboard, and again, we like it when you’re able to easily locate the button instead of having to grope around for it at the side. 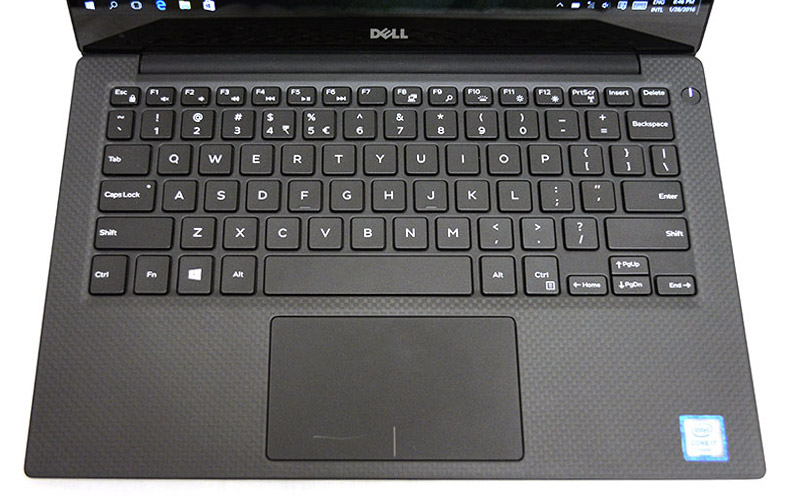 Finally, Dell also made improvements to the precision of its trackpad. In our review of the Broadwell-equipped version of the XPS 13, we noted that the trackpad was a little wanting in terms of accuracy, but with this latest iteration, Dell says that it has reengineered the trackpad to make it better at interpreting different usage styles. It has also made it larger and wider to better accommodate different gestures. Furthermore, Microsoft has reportedly built the trackpad drivers right into Windows 10, as opposed to relying on third-party solutions as it did previously, thus contributing to the increased responsiveness and accuracy. We’re happy to report that the trackpad didn’t give us any issues this time around, so you should have no problems navigating with the new and larger trackpad.