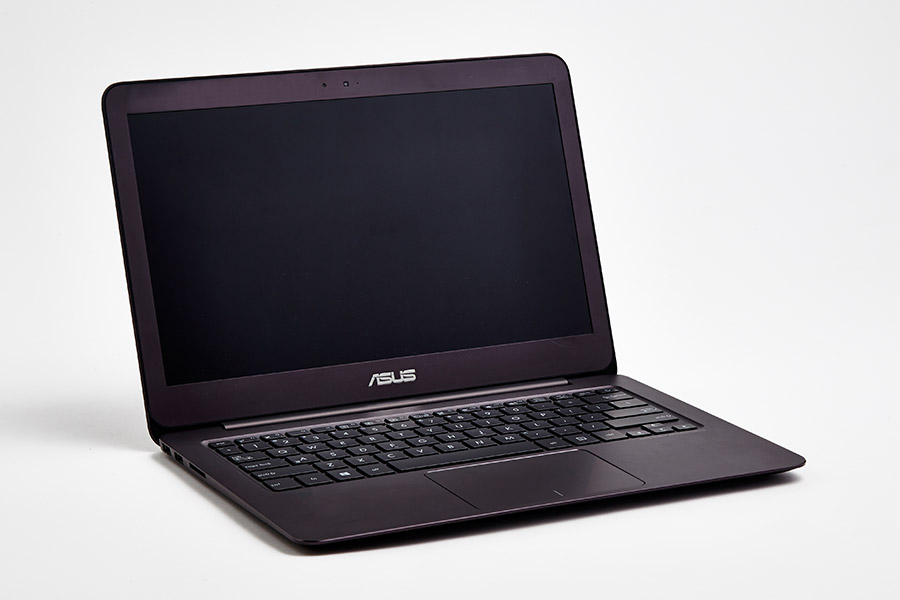 The ASUS ZenBook UX305 is the only ultrabook in this shootout to feature the fifth-generation Broadwell processors instead of the newer Skylake ones. And that's because at the time when we tested these devices, ASUS did not have a variant of the UX305 with an Intel Core i series Skylake chip. (Editor's note: The Intel 6th-gen CPUs have since come to the UX305, with an i7-6500U-equipped model priced at S$1,898. We'll take a look at it in a separate article at a later date.)

Unfortunately for the UX305, this means that it is already handicapped from the outset. Skylake offers both better performance and power efficiency, so this Broadwell-equipped UX305 naturally lagged behind the others in terms of performance and battery life. More tellingly, its 56Wh battery did not even last as long as the HP Envy 13’s smaller 45Wh pack.

Nevertheless, the ZenBook’s attractive design means that you shouldn’t write it off just yet. Its slim profile - just 14.9mm thick - and light weight (1.3kg) make it quite portable. Its entire body is also constructed out of aluminum, and the lid features an attractive brushed metal pattern of concentric circles. The overall impression is of quite an appealing, minimalistic device that is very solidly-constructed. 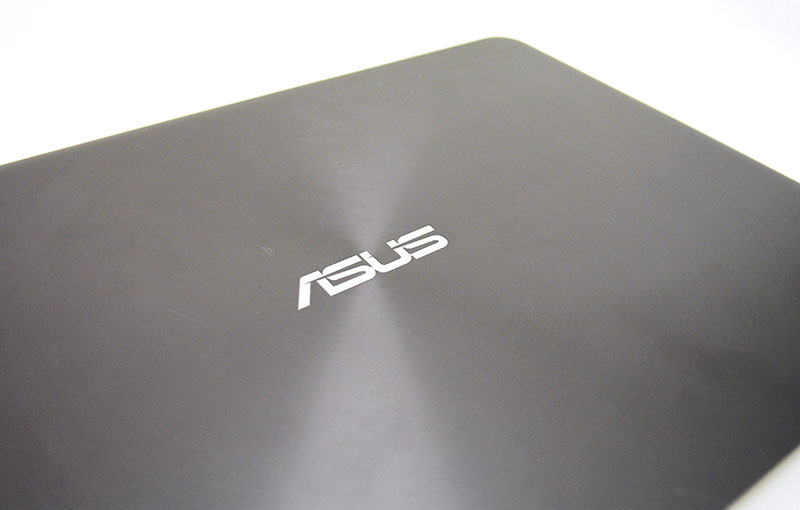 The display itself is a 3,200 x 1,800-pixel IPS panel, in the same ballpark as the majority of its rivals. However, there’s no touchscreen support here, but most users of ultrabooks probably aren’t going to miss it. We also like the fact that the screen features a matte coating instead of a glossy one, as this should help reduce problems with reflections and using the screen directly under overhead lighting (although those inclined to nitpick may take issue with the way colors can appear slightly muted compared to glossy screens). 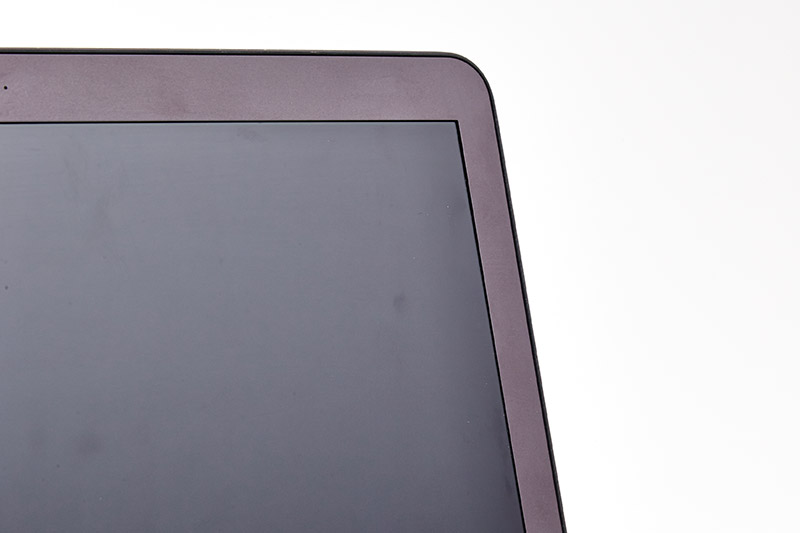 It is powered by a fifth-generation dual-core Intel Core i7-5500U processor (2.4GHz, 4MB cache) and Intel HD Graphics 5500. Compared to the Intel HD Graphics 520 found on the other notebooks here, the Broadwell graphics solution has a lower maximum frequency of 950MHz, compared to the Skylake iGPU’s 1.05GHz (they both have a base frequency of 300MHz). That and other changes at the level of the silicon meant that the ZenBook UX305 was always a handful of frame behind the other notebooks in our gaming benchmarks, as you’ll see later in the results section. Of course, we think it unlikely that this will matter much to anyone in the market for a portable ultrabook, but we’d just like to give you a better idea of the differences between this Broadwell notebook and the Skylake ones.

In addition, the Broadwell iGPU is capable of supporting only a maximum resolution of 2,560 x 1,600 pixels at 60Hz over HDMI 1.4, whereas the Intel HD Graphics 520 can go up to 4,096 x 2,304 at 24Hz over the same output. We don’t see the differences in resolution support as being too significant for those who are mainly using their notebook as a portable work machine, but it may be something to take note of if you’re hoping to hook the UX305 up to your 4K monitor at home.

But other than that, the ZenBook UX305’s specifications are pretty much on par with the rest of the lot, with 8GB of LPDDR3 RAM and a 256GB SSD.

When it comes to display outputs, the UX305 relies on a single micro-HDMI port on the right side, so be sure that you have the right display cables if you’re intending to hook this up to an external monitor. The micro-HDMI port is accompanied by a single USB 3.0 port and headphone jack, along with LED indicators for the system status and battery level. On the other side, there is an additional USB 3.0 port, a USB 2.0 port, and an SD card reader. Of the two USB 3.0 ports, one of these supports what ASUS calls Charger+, which allows you to charge your peripherals more quickly and also while the notebook is sleeping or powered off. If you have multiple devices, this could effectively give you an extra charging point without having to leave your laptop on overnight. 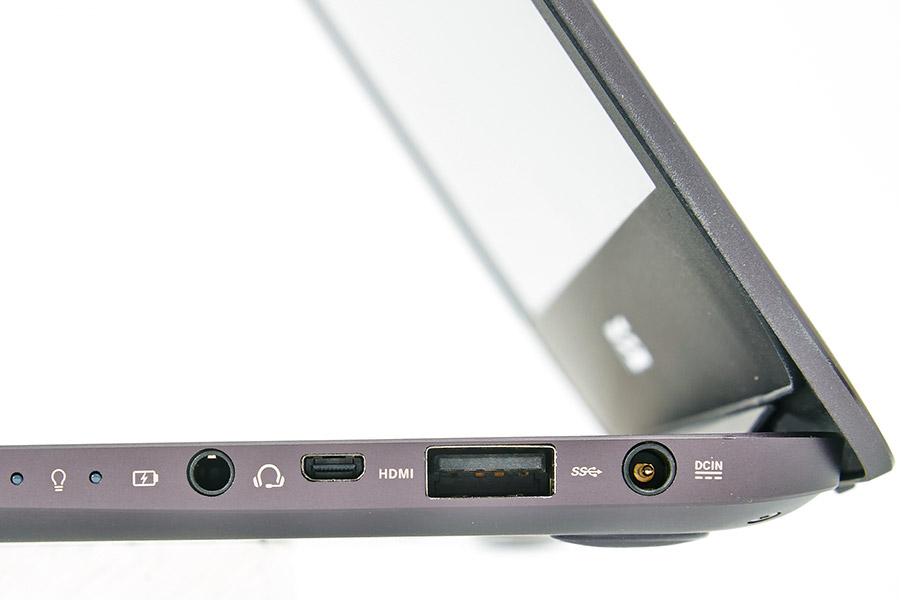 The keyboard is also a standard backlit, chiclet design that is quite easy to get used to. The row of function keys at the top works with the Function button to provide quick access to features like volume controls, and to toggle the keyboard backlight on or off. In addition, an auto-brightness toggle has been mapped onto the ‘A’ key, and we also like the positioning of the power button in the top right - it’s a lot more accessible than one that’s located on the side.