Note: This article was first published on 17th March 2016. 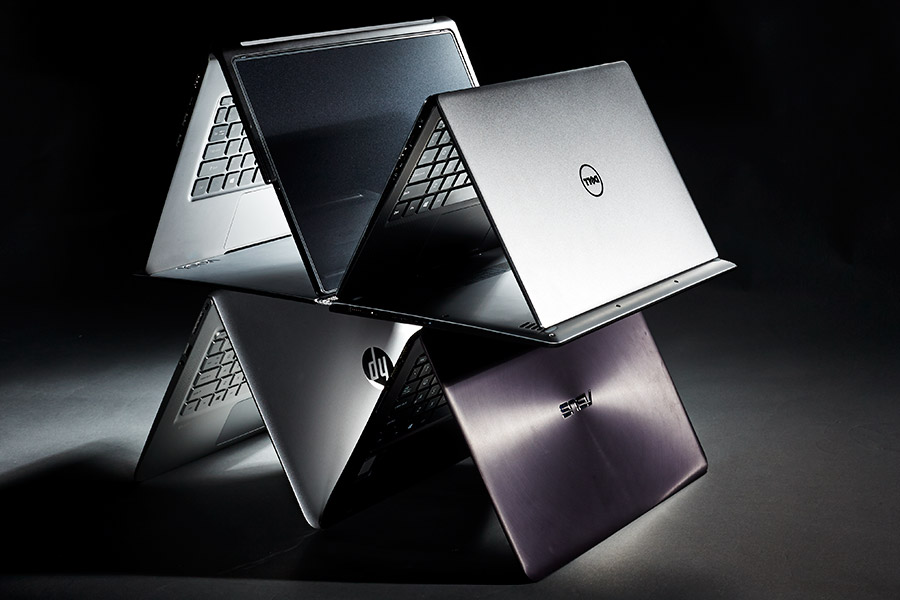 Now that Intel’s sixth-generation Skylake processors are out, manufacturers have begun to roll out the latest convertibles and ultrabooks packed with the latest hardware in full force. Thanks to Skylake’s improved power efficiency, this means faster machines that last for even longer, all wrapped up in slimmer and more attractive packages than before. This also means that the playing field is remarkably similar, with the vast majority of ultrabooks sporting the same processors and similar memory and storage configurations. How's one to choose the right ultrabook in such an undifferentiated market? Ultimately, it all comes down to factors like size, weight, and portability, and also value-added features like a touchscreen display or the ability to switch to tablet mode on the go.

Let's start off with something from Acer. 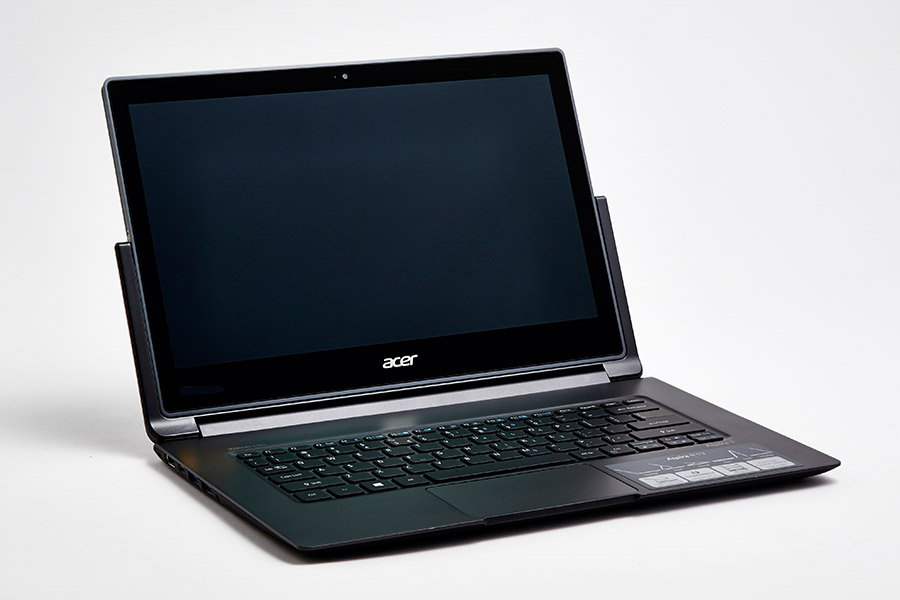 The 13.3-inch Acer Aspire R13 is quite a nondescript convertible notebook. It is a fairly thick dark gray slab, and the display and back of the lid are covered by sheets of Corning Gorilla Glass 3, more commonly found on smaller devices like mobile phones and tablets.

In practical use, the Corning Gorilla Glass 3 display should mean that you have to worry less about scratches, but we think Acer could have dispensed with the glass covering on the lid. We found that this was prone to fingerprints and smudges, and unless you’re going to dedicate a lot of time to wiping them off, the face of your notebook is going to be quite grimy. 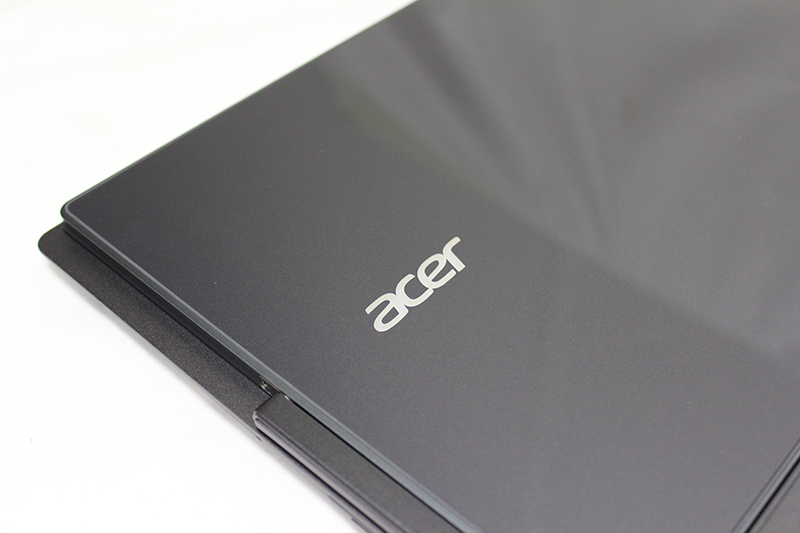 Furthermore, the display was a modest 1,920 x 1,080-pixel IPS panel - quite a letdown considering that all the other ultrabooks reviewed here have ultra-high resolutions of 3,200 x 1,800 pixels. Of course, the Acer’s full HD screen was by no means fuzzy, but it was noticeably less crisp when set beside one of the others. Furthermore, the glossy display means that reflections are going to be quite prominent when working under bright overhead lighting, and you may have to turn up the brightness level to deal with that.

And speaking of thickness, this is actually the thickest and largest ultrabook of the lot at 18.5mm thick - while it isn’t huge per se, it isn’t going to disappear into your tote bag as easily as some of the other ultrabooks. The chunkier profile is partly a result of the hinge mechanism that Acer has chosen to implement, a trade-off for the versatility you get from being able to use the ultrabook in so many different modes and positions. It also weighs 1.6kg, which is a little on the heavy side for a notebook of this class. You’re definitely going to notice it when it’s in your backpack.

Furthermore, the 48Wh battery pack is a little smaller compared to the 56Wh packs on the Dell XPS 13 and ASUS ZenBook UX305, so the Aspire R13 really isn’t scoring any big points in terms of portability.

The screen itself can rotate around the U-shaped stand and be used in six different modes, including as a tablet, easel, or stand. Although not as simple as the 360° hinge on the Lenovo Yoga 900, the hinge was fairly easy to work and felt quite well-built. But for better or worse, a large part of the utility of this design rests on the Aspire Active Stylus that comes bundled with the Aspire R13. For instance, the easel mode sets the display up much like a painter’s easel, and was probably conceived as an alternative for users who don’t quite like to take notes while the display is lying completely flat on a surface 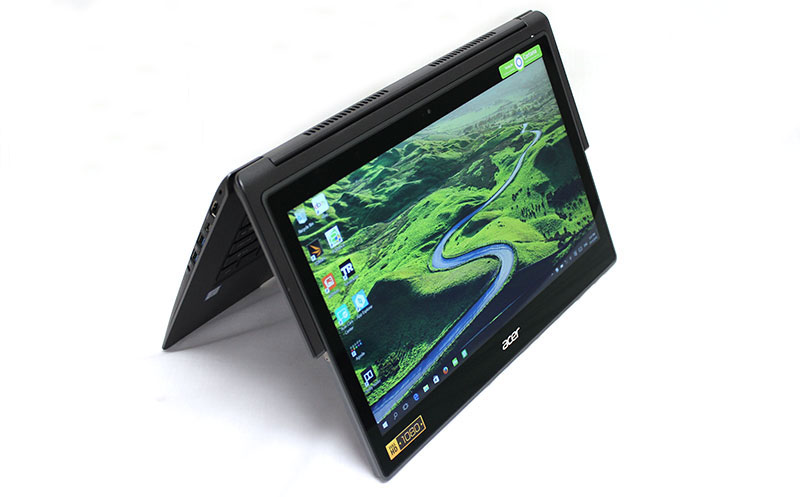 Unfortunately, Acer’s stylus doesn’t have the heft and solid build quality of the Microsoft Surface Pen, and the palm detection feature did not function as well. We also found that with just 256 levels of pressure sensitivity, the strokes were not as smooth as those on the latest Surface Pen, which boasts a whopping 1,024 levels. Writing with that pen was a joy, but writing with this one, not so much. Ultimately, the pen is useful for quick note-taking, but you’re not going to derive any real satisfaction from using it.

That aside, the Aspire R13 is equipped with performance-oriented features that put it ahead of the other ultrabooks reviewed here. For instance, it has two 256GB M.2 SSDs (for a total capacity of 512GB) configured in RAID 0 for faster read and write speeds, and support for MU-MIMO wireless connections via a Qualcomm Vive 2x2 adapter. The benefit of MU-MIMO over existing SU-MIMO technologies is that it allows simultaneous connections with multiple devices. In a household with several connected SU-MIMO devices, the router would only be able to serve one device at a time before moving on to the next. On the other hand, MU-MIMO lets the router serve multiple devices all at once, which translates into shorter wait times. However, before you get all excited because the Aspire R13 supposedly supports faster wireless connectivity, do note that the real benefit you’ll enjoy is actually more limited. That’s because to get the full advantage of MU-MIMO technology, you’ll need both a router that supports MU-MIMO and other devices that do as well. Unfortunately, while there are already MU-MIMO routers on the market, MU-MIMO devices are still few and far between. This means an MU-MIMO router will still have to serve each of your SU-MIMO devices in turn, so you won’t get as much of a benefit in terms of connection speed.

Nevertheless, the Aspire R13 is still the only notebook so far to offer support for MU-MIMO, so if support for the latest wireless standards matters to you, the Aspire R13 is right up your alley. It’s also nice to see that Acer has included such a forward-looking feature on the notebook, even if it may be a little ahead of the times.

The notebook is powered by a sixth-generation dual-core Intel Core i7-6500U processor (2.5GHz, 4MB cache) and Intel HD Graphics 520, the same as all the other reviewed ultrabooks, save for the Broadwell-equipped ASUS ZenBook UX305. There’s also 8GB of DDR3 RAM, that when paired with its speedy RAID storage and processor, should give you a fairly smooth experience. Indeed, we didn’t notice any slowdowns when using the notebook for daily tasks like Web browsing and word processing.

Another thing the Aspire R13 has going for it is its support for Thunderbolt 3 connectivity in the form of a USB Type-C port on the notebook’s left edge. Thanks to the 40Gb/s of bandwidth available, you’ll also be able to use this as a DisplayPort output. The Thunderbolt 3 port is flanked on either side by a full-sized HDMI port, two USB 3.0 (or USB 3.1 Gen 1) ports, and the headphone jack. One of the USB ports has a USB battery symbol next to it, which means it can be used to charge your peripherals even when the notebook is turned off. On the other side, there is the charging port, power button, a USB 2.0 port, and an SD card slot. 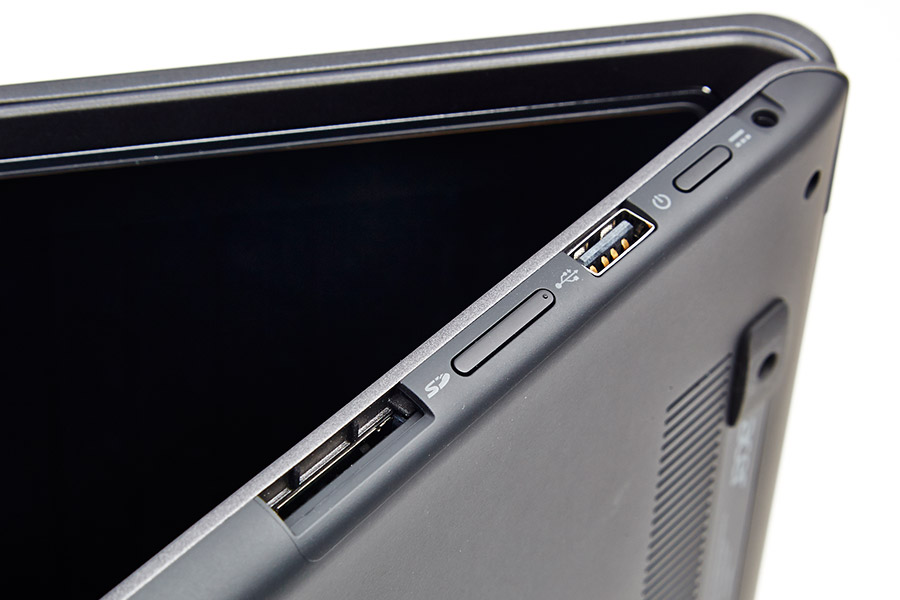 Finally, the keyboard itself is the familiar backlit, chiclet-style affair that is pretty much de rigeur on notebooks these days. We had no complaints about it, and various shortcuts are mapped onto the row of function and arrow keys for easy access to things like brightness and volume controls. In fact, we particularly appreciate the brightness adjustment shortcuts - it’s a lot faster to tweak your brightness this way instead of toggling it in the Windows 10 Action Center. 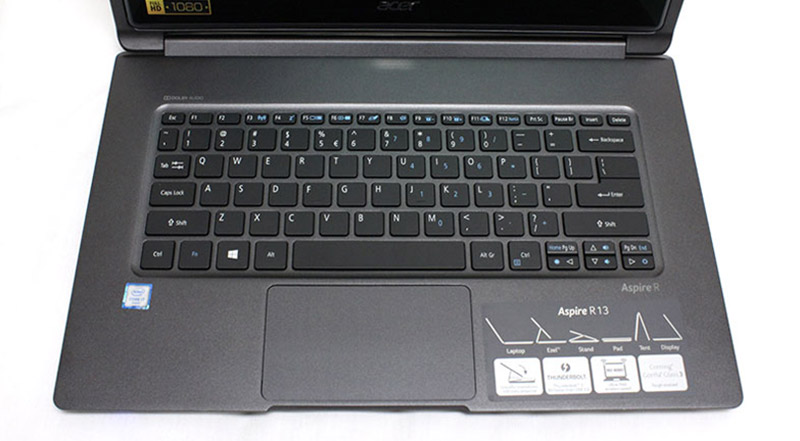