The Fujifilm X-T2 has been something most Fujifilm fans have been waiting for, and so it was with much anticipation that we attended the launch event. As you may recall, the original X-T1 was launched back in January 2014, to mixed response. Many liked the retro design, but wondered if the body would feel unbalanced, while others simply felt the Autofocus systems weren’t up to scratch. Fujifilm has listened and taken in all the feedback, releasing several firmware updates over the years to bring the performance needed to trump the competition. Now, Fujifilm looks to leapfrog everything they achieved with X-T1 with the new X-T2. Based on the technologies first found in the X-Pro2, the X-T2 brings even faster performance and a few changes to the design to make it even more of an all-rounder than ever. One of the things that will stand out straight away, is of course the addition of 4K recording capabilities with Fujifilm’s very own Log Gamma "F-log". Fujifilm says you will be able to apply their filmic presets straight in-camera, so there should be very little grading needed later on if you’re a fan of their colors. The X-T2 seems to be all about refining what was on the original X-T1, as the body shape remains exactly the same as before. The top control dials seem to be slightly larger than before, and the new locking system is a press-release one, meaning pressing down on the button in the center of the dial pops it up and releases the dial for adjustment, while pressing it down again locks the dial and prevents further changes.

While it doesn’t get touch, the rear LCD does get an interesting new feature. A hinge by the side allows you to swing the LCD out so you can view it when holding the camera above or below you in portrait orientation. As demonstrated below, this lets you get pictures when the camera is perpendicular to you. This come sin very handy when doing macro work. Like the X-Pro2, the X-T2 also gets an AF-adjustment joystick, and this is just as responsive, making it extremely easy to shift focus points even when the camera is up to your face. The Q menu button has also been moved up to where the focus assist button used to be, while the eyecup seems to be slighter larger too. A more significant difference is when you activate Boost mode by pressing down on the keypad, pushing the EVF refresh rate to 100fps from the normal of 60fps. (The X-T1 only ran at 54fps) 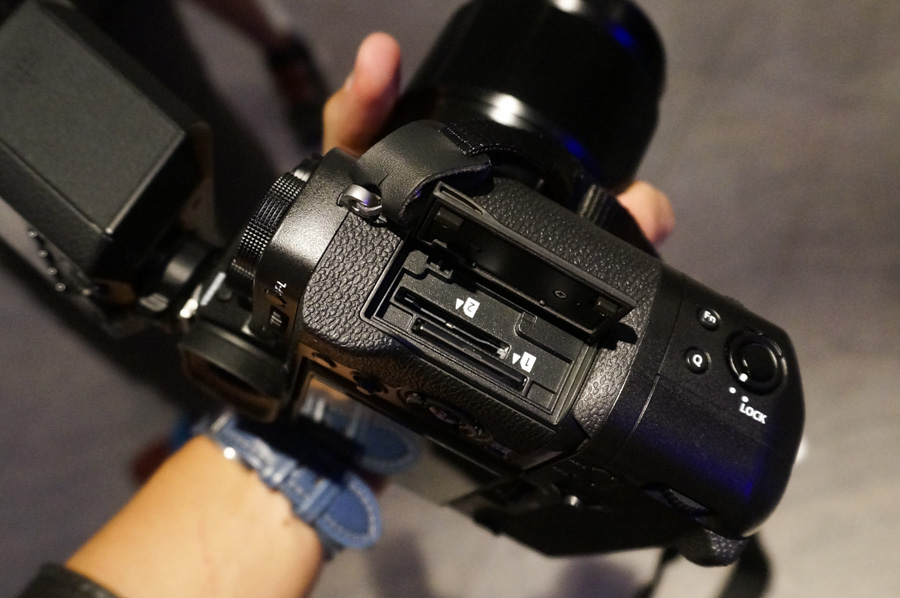 Boost mode is further enhanced when you use the new VPB-XT2 vertical grip as Fujifilm says it will:- Shooting stations were set up at the event, and there was a big crowd gathered to get their hands on the new camera. X photographers were also on-hand to give advice as to how best to handle the camera.

We got a little bit of time with an X-T2 (mounted with the Fujinon XF 90mm F2 R LM WR), and are pleased to share some of the pictures below.

The following photographs were shot with the Fujifilm X-T2. The photos have not been post-processed and are copyright to SPH Magazines. They are provided for your reference only and we ask that you do not reproduce them elsewhere. As you can see, it certainly seems as though the camera will produce great images with good detail at ISOs up to 12,800, while ISO 25,600 also appears usable with a good amount of detail retained still. The autofocus system is certainly fast at picking focus, and faster still at processing images once shot. However, we do think that adding the vertical grip just to enable all the added advantages of Boost mode seems to take away from the advantages of going mirrorless somewhat, especially since 'traditional' DSLRs are in general getting smaller with each revision.

There’s also a slight bump in the price – the X-T2 costs S$2,599 body only and S$2,999 with the XF18-55 kit lens, while the vertical grip will cost S$599. That’s a S$600 increase from the retail price of the X-T1 when it was launched. Still, this certainly is an all-rounded camera that will tackle almost every situation you put it through, so we’re keen to see how it will perform when we put it through our own tests.

For more of the technical details, do check our earlier news piece on the X-T2 here.