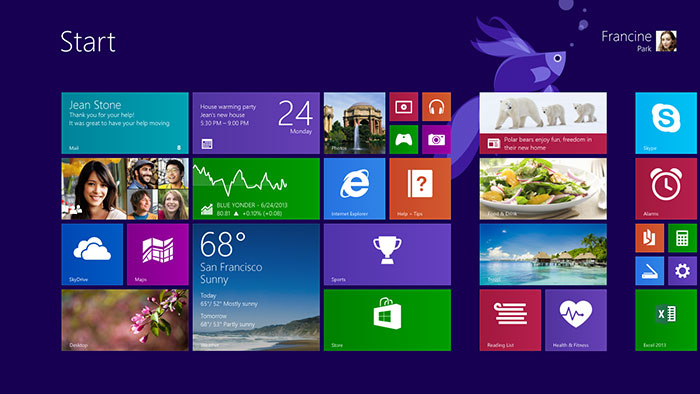 (Editor's note: This article is based on Windows 8.1 Preview, which means Microsoft may add, alter, or remove features right up to official availability. For those interested, Microsoft's very own Windows Experience Blog is a good source to find out about the latest features in the OS.)

Today marks the start of the 2013 edition of the Microsoft Build Developer Conference. Running till June 28 at the Moscone Center in San Francisco, Build is a developer event that targets software and web developers developing for the Windows and Windows Phone platforms, and other Microsoft technologies. So, what has Build 2013 got to do with us - the typical consumers - then? Well, like how Build 2011 saw Microsoft released a developer preview of Windows 8, Build 2013 sets the stage for the company to officially announce the Windows 8.1 update, and release a public preview.

Remarkably, this Windows 8.1 preview comes just eight months after the general availability of Windows 8; and if you think this and its dot one release naming mean that it’s going to be a minor update, you couldn’t be more wrong. Whether Windows 8.1 is to advance the vision Microsoft has set forward with Windows 8, or - as some naysayers would put it - to right the latter's many wrongs, there’s no question that Windows 8.1 is a major update.

Even before today, new features of Windows 8.1 have been leaked; with even more being officially disclosed by Microsoft itself. But, first things first: the OS update will be available for free if you’ve a device running Windows 8 (including Windows RT). Once it hits GA (which is geek speak for saying the software is ready for sale), it’ll be delivered over the Windows Store. If you're buying a new device after it's released, it'll most likely come with it pre-installed (else, just do the free update). The official names for the updated OSes are Windows 8.1 and Windows RT 8.1. Like how you’d download a Windows 8 app from the Windows Store, you can continue to use your Windows 8 PC while you download the 8.1 update. For those adventurous enough and wish to find out what’s new as soon as possible, you can download the Windows 8.1 Preview, which is available starting today. More details can be found over at preview.windows.com.

Alternatively, you can continue reading this article, where we highlight some of the newest features in Windows 8.1 Pro Preview (build 9431) that we've been running for the past day. Without further ado, let’s dive right in.

'The Best Experience for 8-inch Tablets'

It’s no secret that Microsoft is working with PC OEMs to make smaller Windows 8 tablets. In fact, during Computex in June, Acer announced the Iconia W3, which is the world’s first 8.1-inch Windows 8 tablet. Windows 8.1 is designed (in addition to desktops and laptops) to work well with tablets sporting 7 to 10-inch screen sizes, especially in portrait mode, which is the orientation such tablets are usually used in. To improve reading experience, the built-in News app is updated so that it looks great in portrait mode. The New York Times app and the Amazon app for Windows 8 are two third-party apps that are also updated so that they look great on tablets with a small screen. 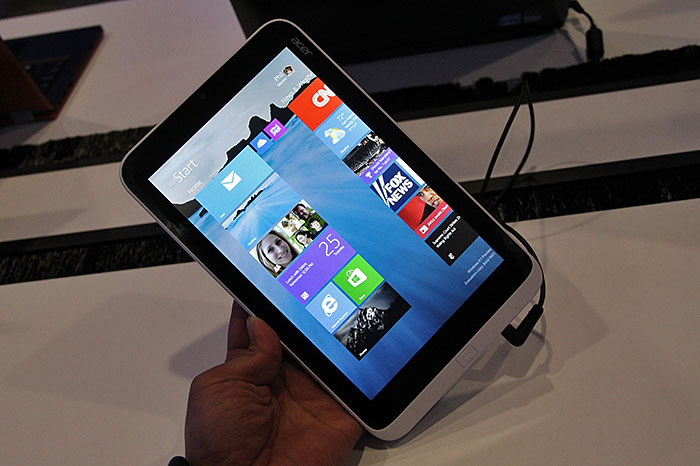 The touch keyboard also sees several improvements in Windows 8.1. As you type, suggestions now show up directly under the letters. And instead of moving your fingers away from the on-screen keyboard to select a suggested word, you can swipe along the space bar to toggle between the suggestions, and then tap to select the word. And the top row of keys can now be used to select numbers: just tap a key and swipe upwards.

Windows 8.1 also enables devices to use the latest standards like Bluetooth 4.0 LE. And InstantGo is a feature that’s available on devices that use Intel’s 4th-gen Core CPUs and Atom Z2760 SoC. Essentially, when the device is in connected standby mode, network connection is maintained so that data, apps, and tiles can still be updated. With InstantGo, waking a device from connected standby mode takes no more than 300ms. 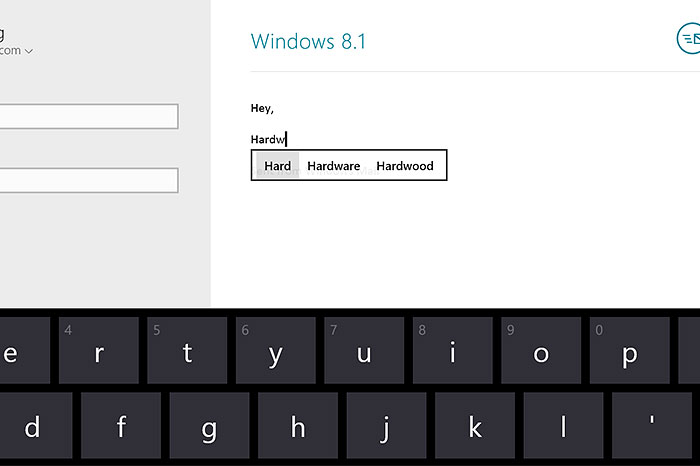 In Windows 8.1, the lock screen can be used to display a slide show of your pictures (whether they’re on the PC or in the cloud), effectively turning your device into a digital photo frame. Some logic is applied too, so that relevant images (instead of a mishmash) are shown. For example, if this month is your birthday, it'll start showing photos from your last birthday. There’s also a camera shortcut: just swipe down to start using the camera. And Skype video chat can be initiated even if the device is locked. 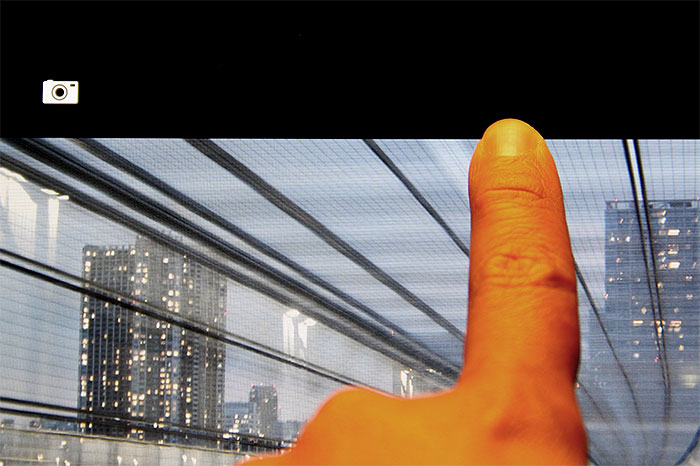 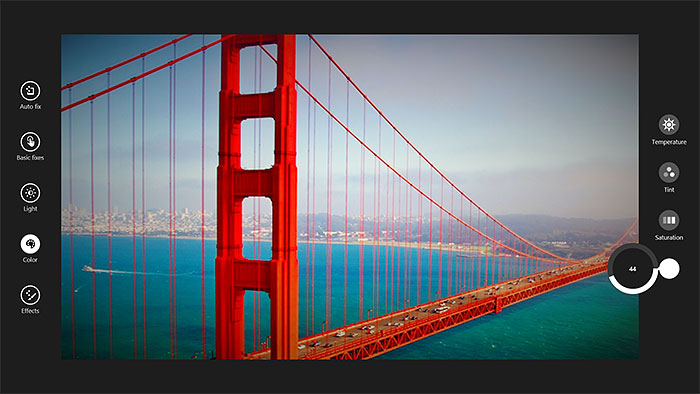 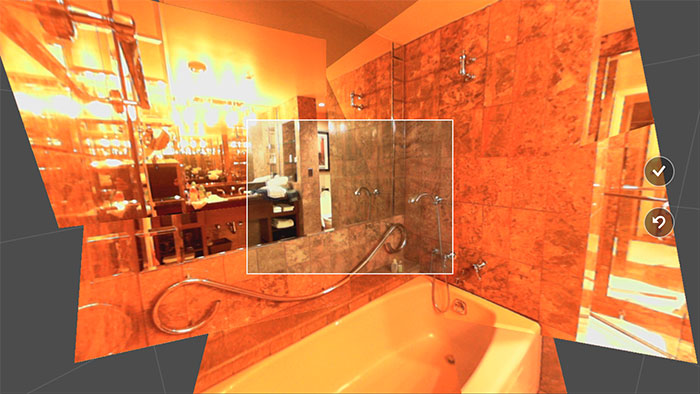 In Windows 8, you can make a square tile larger by doubling its width or a rectangular tile into a square tile - and that’s about it. In Windows 8.1, there are four tile resize options: Large, Wide, Medium, and Small. Wide is your rectangular tile (the size of two square tiles side by side), and Medium is your usual square tile. Small is also a square tile, just that it’s a quarter of the size of Medium. In other words, if you so desired, you now can cram 24 tiny square tiles in the same space you used to put three rectangular tiles. Also, under Settings charm > Tiles, there’s a Show more tiles option. Turning it on decreases the tile scaling factor even further. On our Surface Pro, it allows us to put two additional rows of Small icons. Of course, having tiles this small affects readability on a small screen, but we can see this being used a lot on large external displays. And lastly, a Large tile is the size of four Medium square tiles. 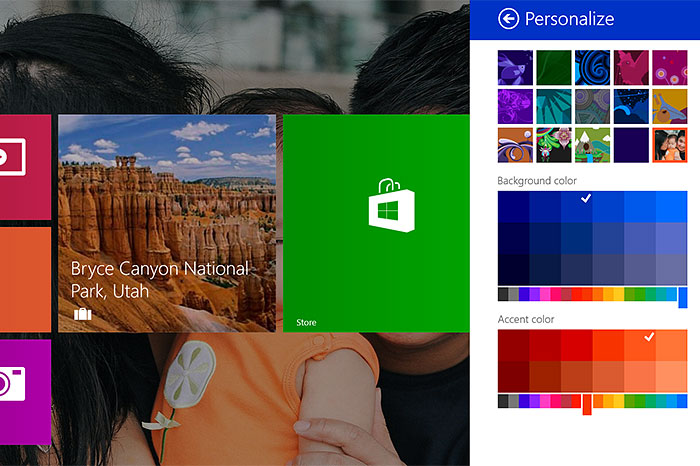 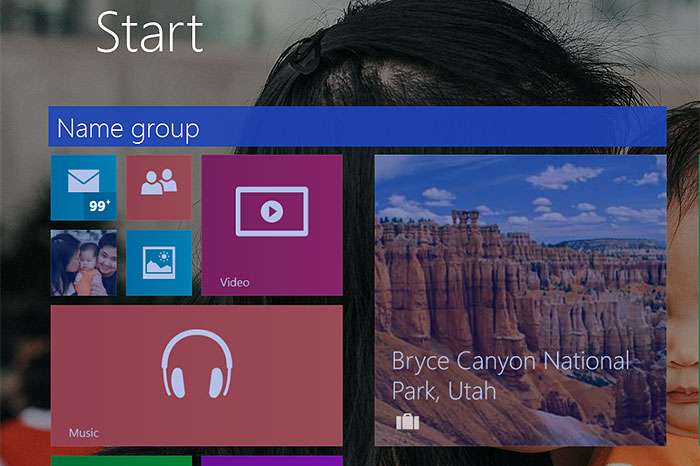 The method of selecting a tile is changed too: instead of swiping down on the tile, you press and hold it. And when you do that, you will also notice that you can name the tile groups. This is certainly more discoverable than the current method, where you need to go into a zoomed out view to select the group you want to name. Better yet, if you’ve more than one tile selected, you can now move them en masse. Our minor gripe now is that the touch-and-hold method of selecting a tile isn't implemented system wide. For example, in the Photos app, to select a photo, you still use the touch-tile-and-swipe-down gesture.

It’s also easier to see the apps you’ve installed. Just swipe upwards on the Start screen (your finger can be on a tile) to get the Apps view. You can now sort them by name, date installed, most used, or category. 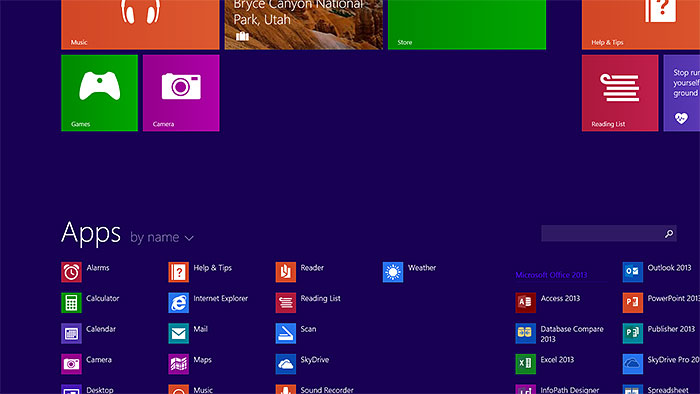