A Different Kind of Charm

A Different Kind of Charm

To access the Settings, we moved the mouse pointer to the bottom left hand corner to invoke the Settings Charm. (Yes, you read us correctly.) In short, Charms are commands such as Settings, Devices, Share, Search, and the Start button that popped up when you swipe to the right in Windows 8; or as in our case, when you bring the mouse cursor to the lower left hand side of the display.

Upon selecting the Settings Charm, its menu bar glided out from the right of our display. We clicked on the Wi-Fi symbol to list the available wireless networks. After verifying our authentication details, we were able to lease an IP address from our internal office wireless network. 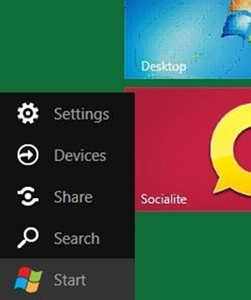 Here's a list of what each of the Charms is for:

For developers, Microsoft has introduced an interesting concept called 'Contracts'. Simply put, it governs how third-party apps interact with one another within Windows 8. For example, if your app implements the Search Contract, when the user initiates the Search Charm, your app will also be invoked to contribute to the search results. And as you might have guessed by now, when the user click on the Share Charm (for example, in Paint), if your app has implemented the Share Contract, it can access that data (maybe to post to Facebook or Twitter). A sharing contract consists of two parts: a source and a target. An app can be either one, or both. The above-mentioned are just two examples of Contracts; there will be more.

When we clicked on the Internet Explorer tile, it launched the mobile Internet Explorer 10 (IE 10) in full screen. We navigated to YouTube and tried to view a video clip. Metro IE was stopped in its tracks with an unceremonious warning to update the Adobe Flash plug-in. We were brought to the Adobe Flash site, but Flash Player 10.3 is currently not available for this 64-bit version of Windows 8 Developer Preview.

Undaunted, we switched to classic Windows by clicking on the Desktop tile and navigated to YouTube again with the desktop version of IE 10. Upon viewing the identical warning as above, we navigated to Adobe's website where we had to choose the next best Adobe Flash version, as there was none for IE 10 on Windows 8. Ultimately, the Windows 7 version of the plug-in worked just fine.

At this juncture, it's worth pointing out that the desktop version of IE 10 operates very similar to that of IE 9. For those who've been following the development of IE 10 and Windows 8, the one included in the developer preview is near identical to June's IE 10 Platform Preview 2. The greatest difference between IE 10 and IE 9 is of course improved HTML5 support. For example, IE 10 supports CSS3 Positioned Floats that let text flows around figures on a page. It also seeks to enable Web apps to do more in the browser without resorting to plug-ins, as well as offloading tasks to parts of the PC that are better suited for them, such as graphics tasks to the GPU and JavaScript compilation to different CPU cores.

It's apparent that most of Microsoft's current efforts are on the Metro version of IE 10. Like any other Metro apps, we feel that it's best suited for use on a tablet; you'd be able to do things like swiping up and down to show and dismiss the address bar, see other opened windows, and have the option to pin the current website to the Start screen.

The tablet evolution brought on by the iPad is challenging the desktop dominance of Microsoft. And in true spirit of the software giant, Microsoft is meeting Apple and other worthy challengers (read: Android) head-on with Windows 8. Until now, Windows has only supported the x86 architecture, but this is going to change with Windows 8 picking up support for the ARM architecture. The latter is most often used in mobile devices such as smartphones and tablets. Even with Microsoft's “run on all platform” approach, the system requirements for Windows 8 is touted to be similar or less than that of Windows 7.

The Windows Store is another offering to look forward to. To those users who are familiar to existing online application stores, we wonder what the Windows Store will offer to make itself stand out amidst this crowded playing field. In our opinion, none of the 'app stores' besides Apple's has been a true success thus far.

To conclude, it's important for us to stress that this is only the preview (pre-beta) version of Windows 8. While the Metro UI is cast in stone, other aspects of the OS aren't. And if you want to test out this developer preview, Microsoft has this following warning on the download site:

The software is provided as is, and you bear the risk of using it. It may not be stable, operate correctly or work the way the final version of the software will. It should not be used in a production environment. The features and functionality in the prerelease software may not appear in the final version. Some product features and functionality may require advanced or additional hardware, or installation of other software.