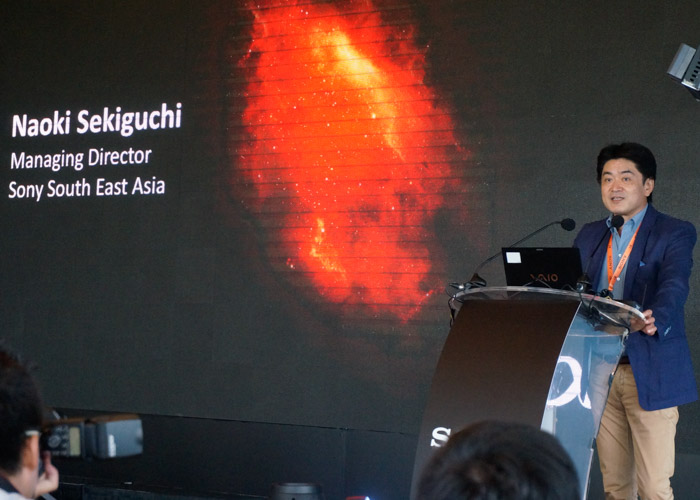 A beach side hotel in Sentosa was Sony’s chosen location for the regional launch of their new flagship full-frame camera, the A7R II. If you recall, Sony’s A7 series was launched with two models – the A7 and A7R, with the A7S following about eight months later. The A7 was recently updated to the A7 II, bringing with it an improved five-axis in-body image stabilization system and a slightly tweaked body design that afforded photographers a better hand grip as well as a better positioned shutter button.

What then, lay in store for the update of the A7R? Improved resolution of course! Many were speculating if Sony would try to one-up Canon’s EOS 5DS series by releasing a camera with a 50 or 60-megapixel sensor, but it appears they’ve decided to go for a 'best' middle ground between ISO sensitivity and image quality by releasing the A7R II with 'just' 42.4-megapixels. 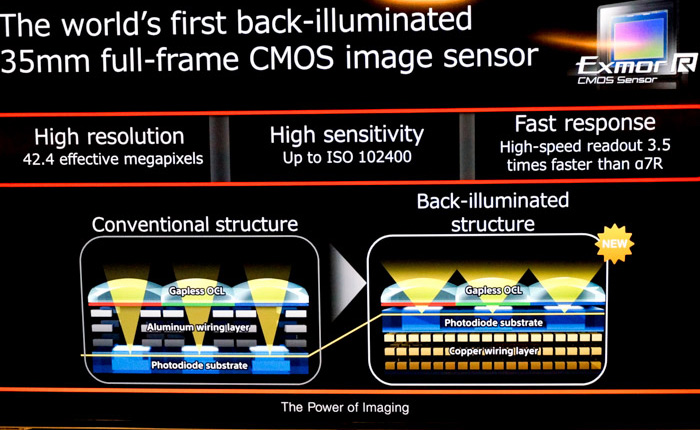 With the A7R II, Sony has implemented a world’s first – a 35mm full-frame back-illuminated CMOS sensor which has a readout time 3.5 times faster than the A7R, and greater sensitivity thanks to a new design. The aluminum wiring layer that is generally placed under the gapless optical lenses on the sensor has now been replaced with a copper wiring layer and placed below the photodiode substrate. This move allows the photodiode substrate to collect the full amount of light possible, and is a primary reason for the improved performance in the A7R II.

Where the A7R could only go up to ISO 25,600, the A7R II now boasts the ability to go up to ISO 102,400 (after boost). Compare this to the Nikon D810A and the Canon EOS 5DS which only go up to 51,200 and 12,800 (after boost) respectively, and you certainly have to admit that Sony has probably made a smart decision in not trying to push the numbers as far as resolution goes. 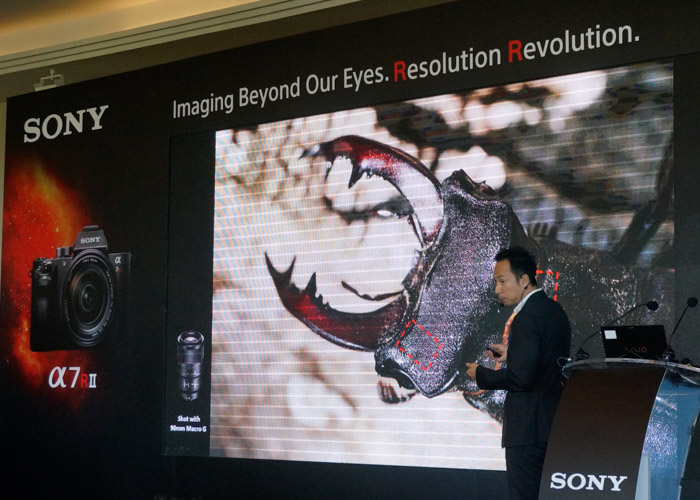 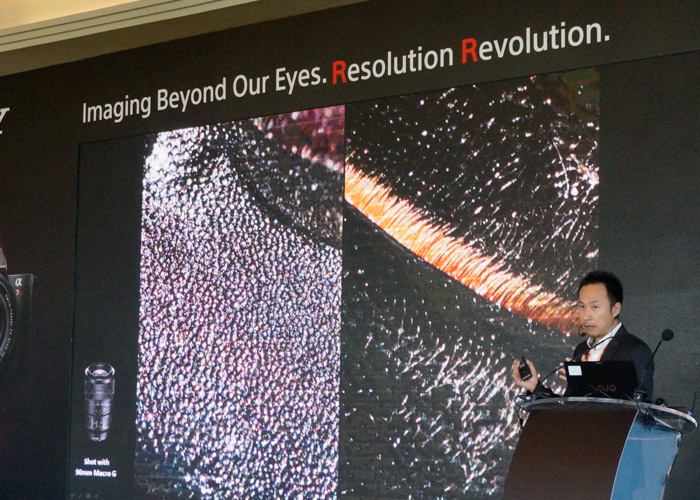 That said 42-megapixels is certainly not a small number, and as Sony was soon to reveal in their presentation, you can get a lot of detail. Here's Mr Takashi Yasuda, Sony's General Manager for Digital Imaging Marketing Div (Sony South East Asia) showing off a macro image taken with the A7R II, and the detail from the resulting 100% crop. As you can see, there certainly is plenty of detail that can be captured by the new sensor! 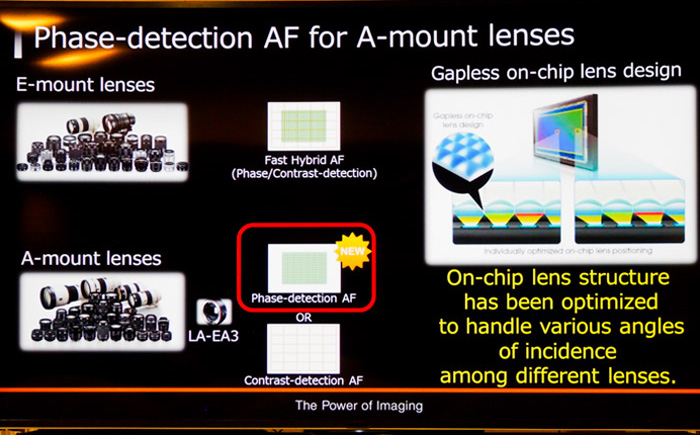 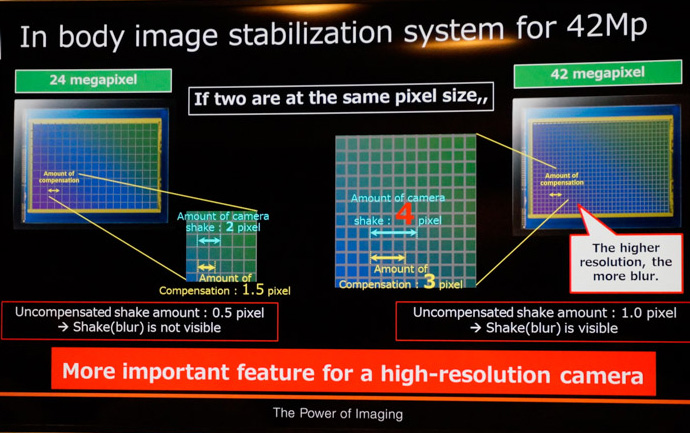 Of course it isn’t all just a numbers game; as Sony later went on to explain how they had to completely rework the image stabilization system from the A7 II to account for the greater pixel pitch of the A7R II. Because there are more pixels packed into the sensor of the A7R II, the same amount of physical shift caused by camera shake results in a larger amount of pixels affected, hence the greater the amount of "blur" seen. Thus, Sony’s engineers had to completely rework the motion estimation algorithm used by the image stabilization engine, tuning almost seven times the amount of parameters than what was used in the A7 II. 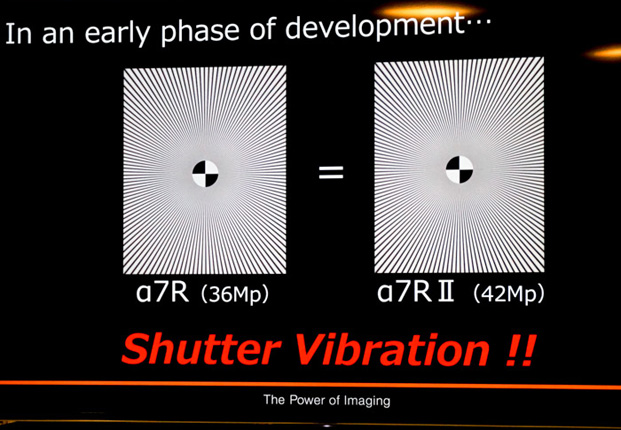 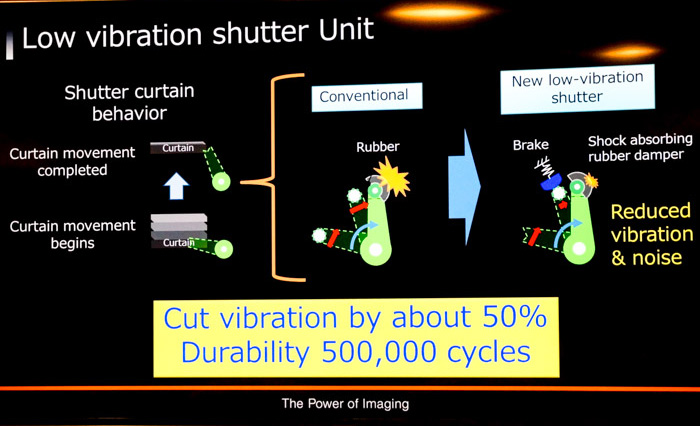 A new low vibration shutter unit also had to be implemented, as early tests showed that images from the A7R II were not displaying the full resolution the sensor was able to capture. The culprit was vibration from the old shutter unit, so a new unit was designed with a brake system and better dampening implemented. The end result is that the A7R II is able to capture great detail with up to 4.5 steps of compensation thanks to the new 5-axis image stabilization system and the new shutter unit.

All in the eyes 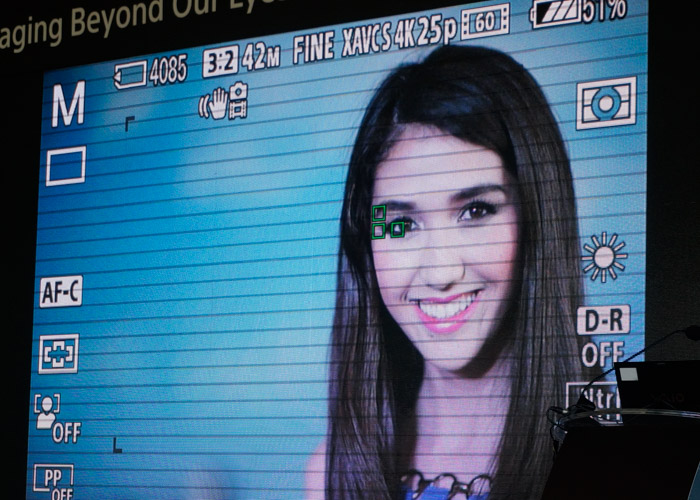 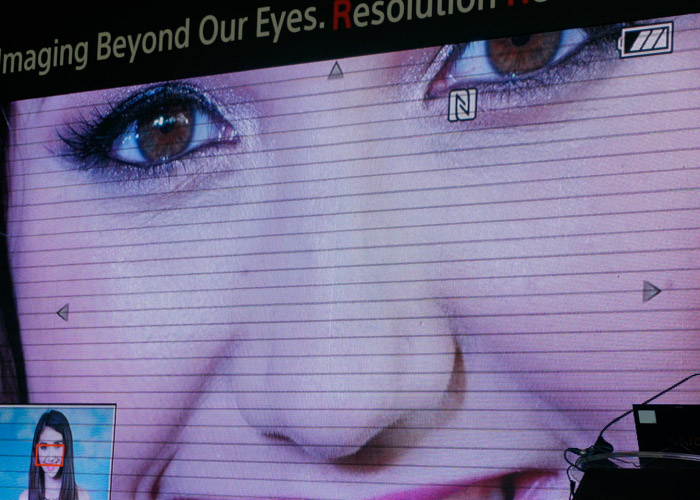 Miss Tuason next demonstrated the continuous AF modes, getting the subject to move and sway each time, and you could see in real-time (the A7R II was providing live feed out to the projector) that the AF points were indeed tracking the model’s eyes quickly and accurately.

Testament perhaps, to the work put in on the new advanced motion-detection algorithm? That powers the AF module, which has 399 focal plane phase-detection AF points that work together with 25 contrast AF points to achieve a focus speed that’s about 40% faster than the original.

Unfortunately, Sony has placed an embargo on all images taken from the A7R II until 3rd August, so we won’t be able to share any of those images till later. What we can share though, is our first impressions from our brief time with the camera. 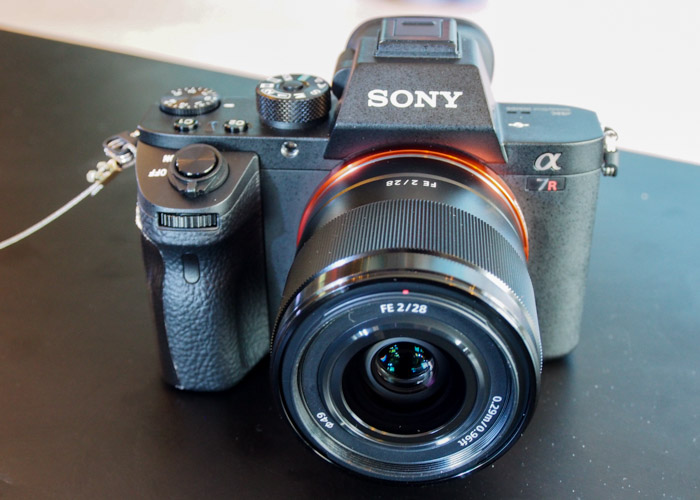 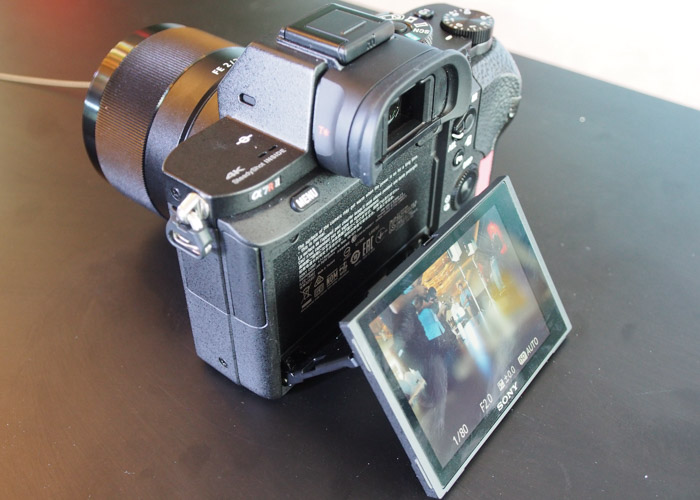 The A7R II gains the same improved body design as the A7 II, which means you get a deeper handgrip, with the shutter button placed on a lower plane above the power switch, as well as the added custom function buttons. These are small tweaks that make a world of difference in terms of real world handling, and show that Sony has been listening to its customers.

The EVF is nice and bright, and overall the response time was fairly short, though we did find that there was a bit more viewfinder black out between shots when using the camera in single shot mode as opposed to in continuous mode. Also, the eye sensor seemed to be a little too sensitive, as the LCD would sometimes turn off when we were pointing at things towards the top of it. 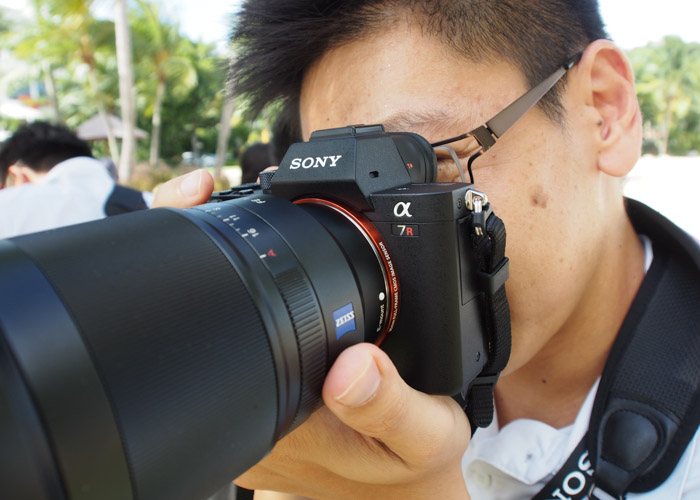 The A7R II is quite a bit heavier than the A7R as well, coming in at 625g as opposed 465g in the original. It’s also quite a bit deeper, measuring 127 x 96 x 60mm compared to 127 x 94 x 48mm of the original. That added mass does help it to balance out some of the heavier Zeiss lenses better (like the 35mm f1.4 we had mounted), but then that also takes away some of the benefits of a mirrorless system. 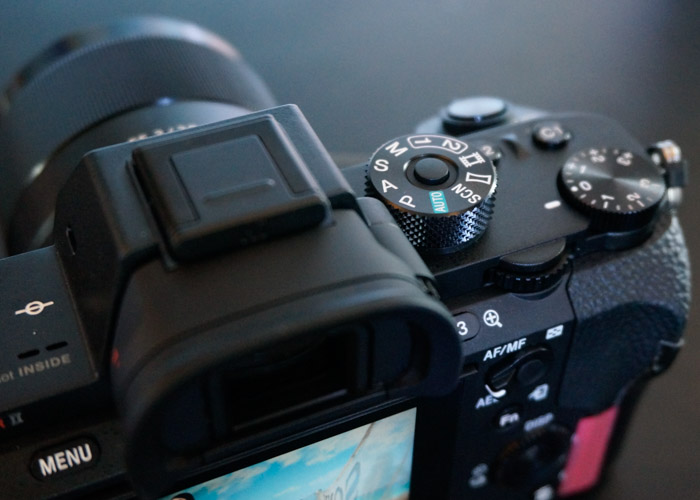 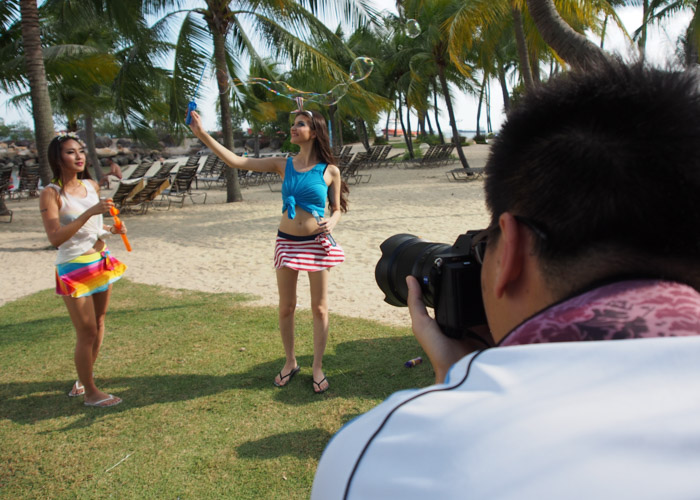 We must say that we like that the shutter is a lot quieter than before though. Where the previous camera would go KAH-CHUCK, the A7R II now triggers with much less fuss, and the inclusion of a “silent shutter” mode that utilizes the camera’s front shutter allows you take pictures almost literally silently.

From what the A-series photographers on hand at the event say, the noise performance from the A7R II is also much improved even in the lower ISOs, making for cleaner images when doing long exposures in low light. Hopefully we’ll be able to update this article with images taken from the camera soon enough, but from a design and handling point of view, the A7R II is certainly an intriguing camera to look out for. 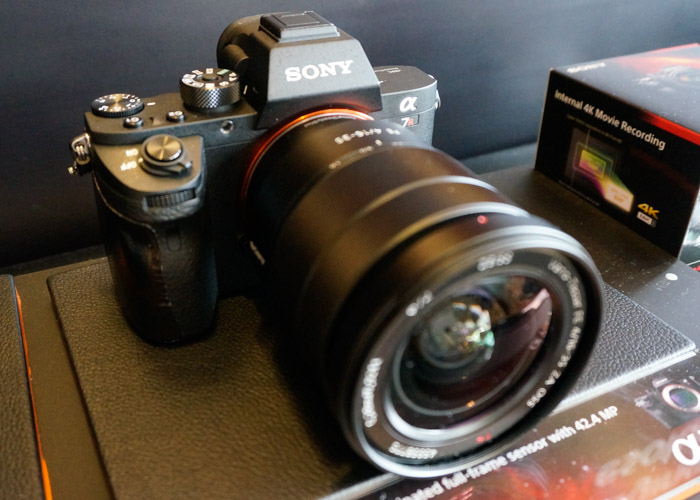