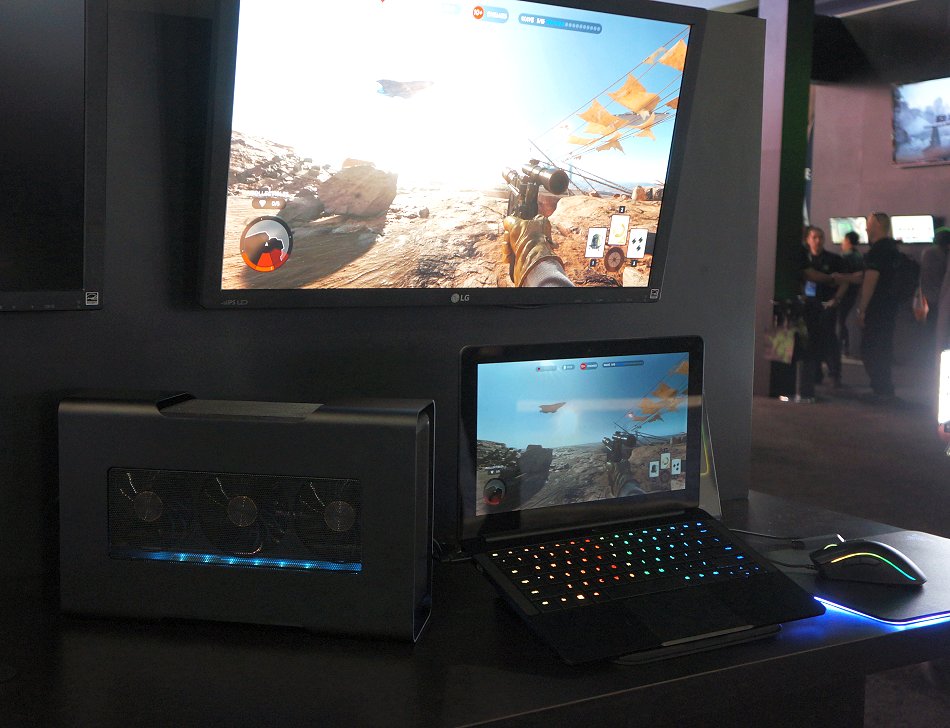 Yesterday we shared news of Razer’s new Ultrabook, the Razer Blade Stealth, which they claim is the ultimate Ultrabook because of its CNC-milled “aircraft grade” sleek aluminium chassis, touch-screen QHD and UHD (4K) resolution options, Intel Core i7 processor, PCIe-based SSD and Thunderbolt 3 support. You can read up on more details and basic proposition in our news piece. Sounds like it may just live up to the “ultimate Ultrabook” billing, or does it? 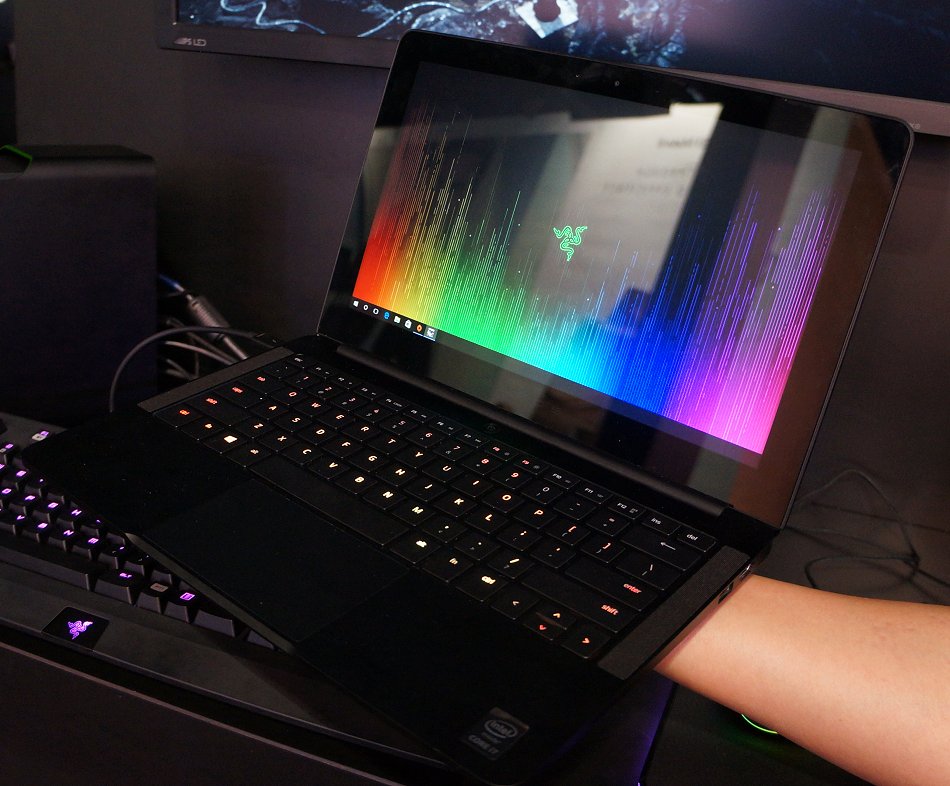 For starters, Razer is associated with gaming and great design. The Blade Stealth may have the latter portion going for it, but the former isn’t quite apparent in this new machine. Why? That’s because the Ultrabook is only equipped with the processor’s integrated graphics – an Intel HD Graphics 520, which is quite a basic graphics engine even where integrated graphics are concerned. It’s not even an Intel Iris Pro class that would have made a mark. This may be fine if you really have no intention of gaming on the move, but the notebook doesn’t have the chops to even try relying on it occasionally. For any decent gaming, you’ll have to rely on the optional Razer Core graphics enclosure companion. 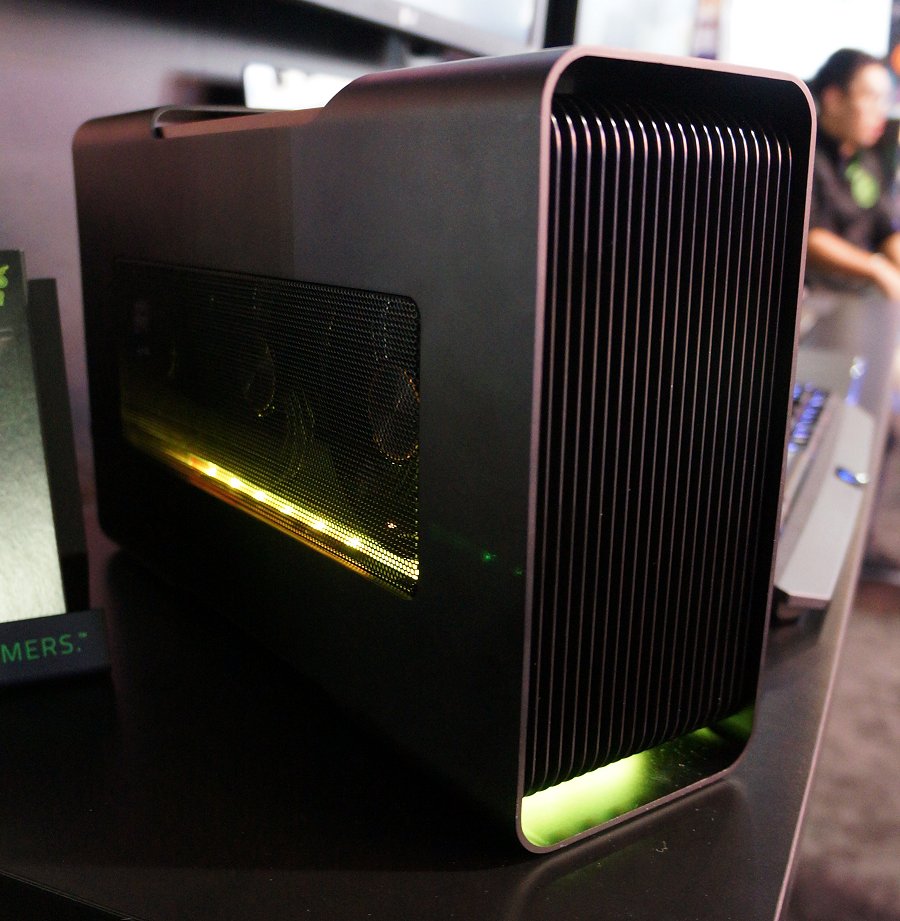 Here comes the optional Razer Core to save the day for desktop gaming with the Razer Blade Stealth. Like other options in the market from MSI and Dell’s graphics expansion enclosures, you’re in control of what graphics card you would like to add to control costs and expectations. The unit comes with a 500W power supply, which is more than enough for any single graphic card of choice you may want to add into the Razer Core. The rear of the unit has a handle to pull to reveal the Core's innards to either add a card, swap the card out or just perform maintenance:- 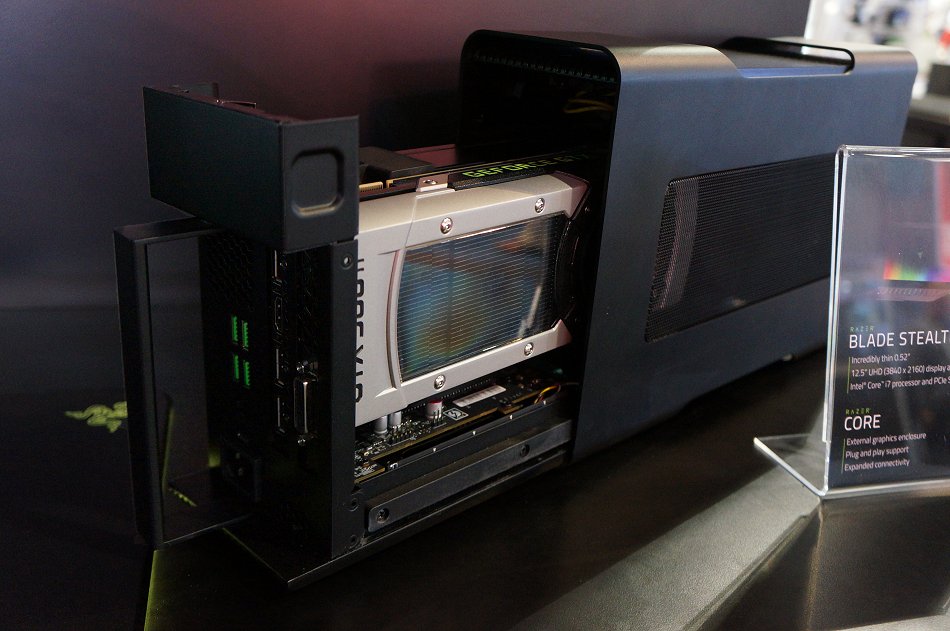 The Razer Core also adds more USB 3.0 ports and an Ethernet port for your notebook. So how does this all interface with the Razer Blade Stealth? Over a single Thunderbolt 3 (USB Type-C) connection! This single connection has extremely high bandwidth to handle graphics, data and even power over the same cable. In fact, the Razer Blade Stealth can recharge itself when connected to the Razer Core. Like the Apple Macbook that uses a USB Type-C port for charging itself, this Razer notebook does the same as it comes with a power adapter to interface with the USB Type-C port when charging from the wall socket. Since the Razer Core has a pretty beefy PSU and the fact the Razer Blade Stealth consumes just 45W of power under operational load, the Razer Core companion will have no problems to power itself and charge/power up the notebook simultaneously – be it whether you’ve at idle or gaming away in Star Wars Battlefront. 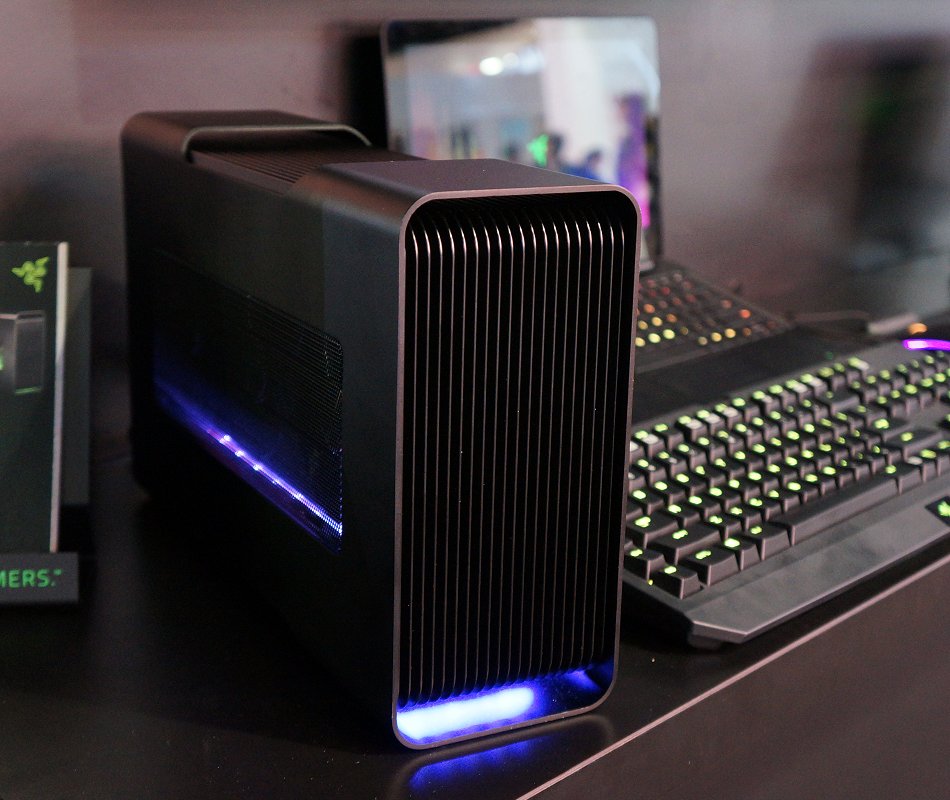 By contrast, MSI’s GS30 2M Shadow that debuted nearly a year earlier is slightly larger (barely larger actually), that comes with a non-touch 13.3-inch QHD resolution screen and also has an expandable desktop graphics companion. Although thicker, the MSI notebook is actually lighter than Razer’s new counterpart – 1.2kg vs. 1.25kg. So the notebook is still light and probably feels less dense because of its tad larger dimensions.

More importantly, the MSI GS30 2M Shadow is equipped with a fairly high-end Core i7 processor that has Intel’s Iris Pro Graphics 5200 – a much more powerful integrated GPU as you can see from the benchmarks as compared to a notebook running just an Intel HD Graphics 520. With the Iris Pro graphics, you can actually consider decent low and mid-quality level gaming on certain titles. The MSI GS30 2M Shadow is thus, a legitimate gaming-grade Ultrabook. The Razer Blade Stealth isn’t.

We have to point out that Razer isn’t marketing their Ultrabook as gaming capable, but it goes without saying that people will automatically associate anything from Razer to be game-worthy. As such, we find the Razer Blade Stealth’s proposition to be a weak attempt when it could have been better where it matters most.

Plus, both Dell and MSI have been pushing their graphics enclosure concept for more than half a year now, which makes Razer a late entrant to the game (although its implementation is different). The Razer notebook will still have its fans and followers opting for it, but from a technical and monetary standpoint, we feel there’s better value from the MSI GS30 2M Shadow.