Note: This article was first published on 16th April 2017.

Recently at the Esplanade Singapore, Onkyo unveiled three of their latest products. The DP-X1A, an update to their popular DP-X1 portable audio player, the LS2700 3D sound bar system, and the smaller NCP-302 standalone speaker. 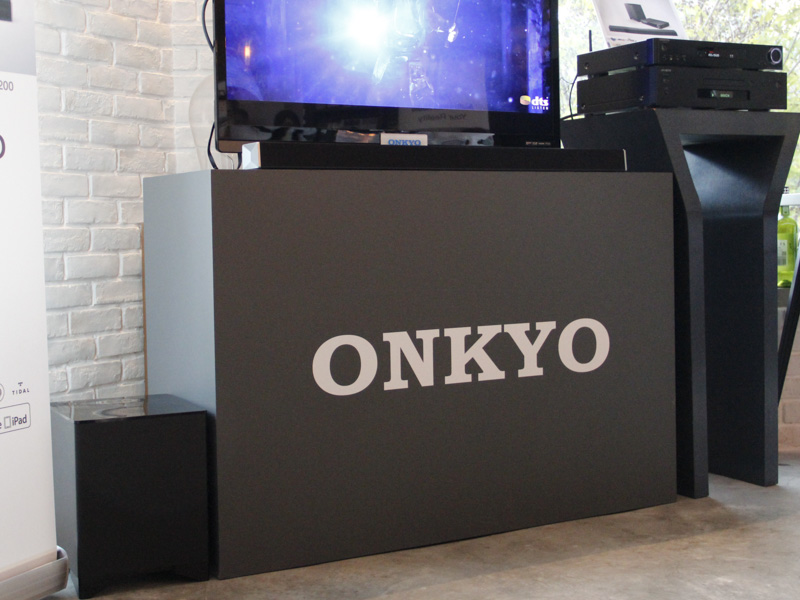 Both the LS2700 and the NCP-302 speakers support multi-room features through FireConnect, a network protocol based on Blackfire that operates over 5GHz/2.4GHz Wi-Fi and offers 44.1kHz and 48kHz sampling rates. They both also offer support for DTS Play-Fi and Chromecast, so you should have no issues getting them to play music wirelessly from your favorite source. In particular, DTS Play-Fi support should make it easy to send multiple streams to different speakers simultaneously, so these are certainly multi-room ready speakers.

The LS2700 is a nice slim sound bar system that’s impressive in that it offers both Dolby Atmos and DTS:X support, which should make for great movies and videos right in your living room. The sound bar measures just 53mm in height, and the entire system (sound bar, wireless powered woofer and 5-channel network receiver) fits away neatly beside your television. 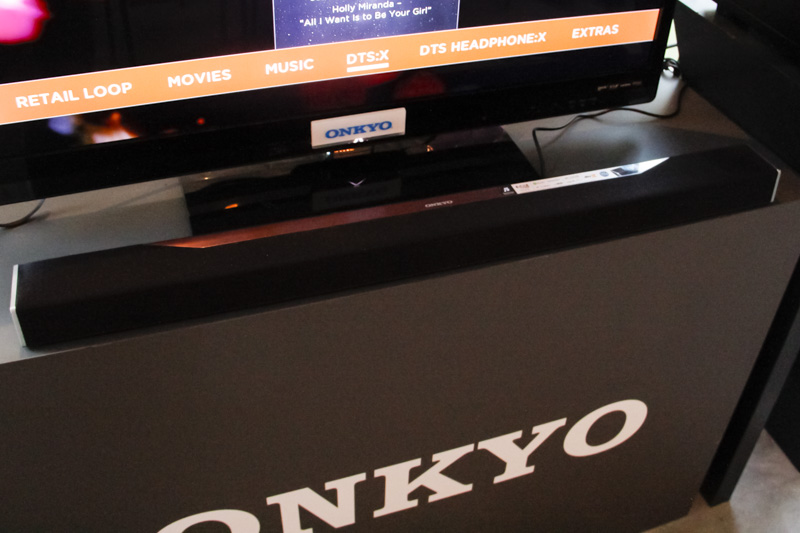 We were given a demonstration of a short DTS test clip – Dust, which has the main character using Streetfighter-style martial arts to fight off a monster chasing him. On this clip, we experienced footfall sounds, explosions, a little bit of dialog and of course a background sound track, all of which gave us a good impression of the system’s performance in handling the mids to lower bass frequencies. These are definite strengths for the system, and we did think it delivered dialog well.

What we thought was lacking a little though, was finesse on the highs. Some of the sound effects seemed a little sharp, and the system didn’t quite deliver the level of clarity we heard from competing speakers like the Sonos Playbase or the KEF LS50 Wireless which we’d only just recently auditioned.

Still, seamless support for Deezer, TuneIn, Spotify and Tidal via the Onkyo Controller app means you can easily enjoy music from just the app on your phone with this. Meanwhile, the multi-room capabilities mean it should be easy to use the system with other speakers in your home, giving you a much larger setup. This three-piece multi-room sound bar system is going for S$1,799. Back to the mid-sized NCP-302 standalone speaker, this features two 77mm woofers and a 26mm balanced-dome tweeter in a solid MDF enclosure. It too has multi-room capabilities over FireConnect, and so can be controlled remotely via the Onkyo Controller app. A recording of Norah Jones’ Don’t Know Why was played on this, and the speaker seemed to deliver good performance on the mids and highs. Bass performance was also commendable, as the speaker turned out a nicely controlled performance of the track.

This is going for S$599. Both multi-room capable speakers is available from authorized retailers like Harvey Norman (Millenia Walk), Audio House and Courts. 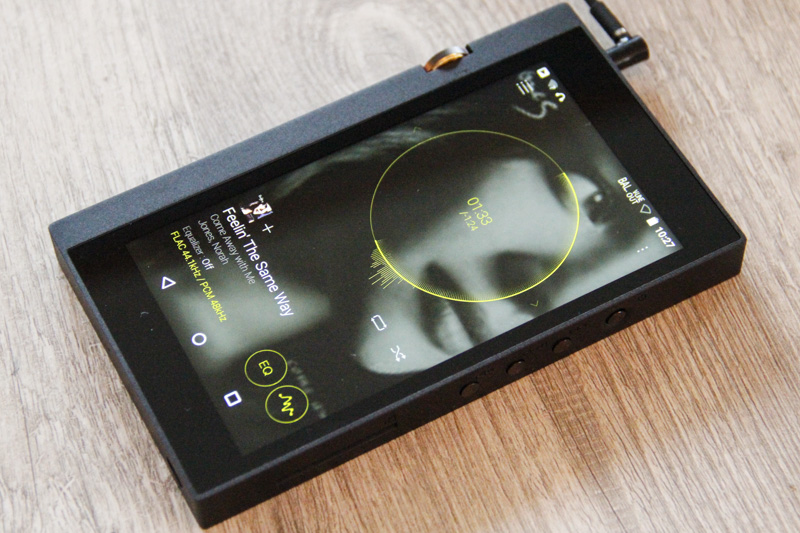 Finally, we moved to the DP-X1A digital audio player. This DAP may seem a little chunky in the hand, but feels solidly built, and has a nice 4.7-inch, 720 x 1,280 pixels resolution touch screen. It’s powered by the Qualcomm Snapdragon 800 processor, and runs on Android OS 5.1 (Lollipop). It supports Wi-Fi on the 802.11b/g/n/ac bands with Wi-Fi direct and WPS capabilities, so you can easily grab new apps, music and games to store on either the 64GB of internal memory, or in one of two microSD cards. Apparently, the max storage for the system is 464GB, so you’ll be limited to 200GB per microSD slot (yes, that's right, there are two microSD card slots). 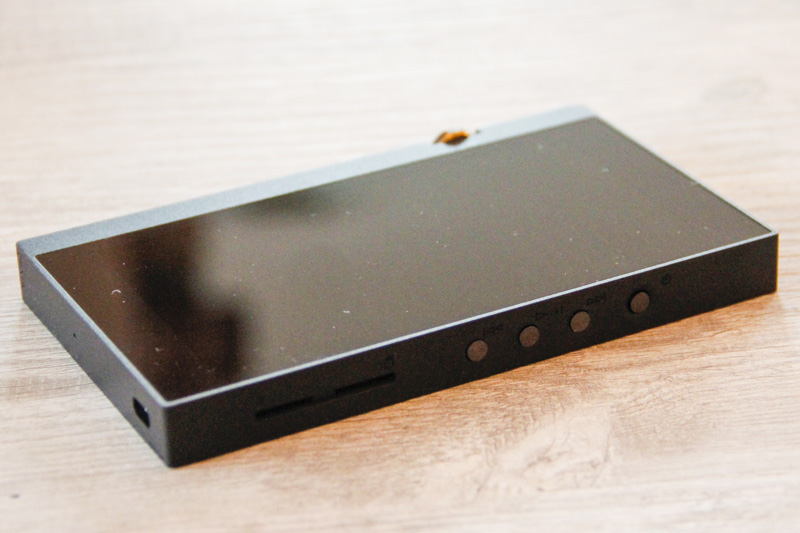 The DP-X1A will play up to 11.2MHz DSD and 384 kHz/24 bit FLAC and WAV files, and uses a fully balanced circuit design to provide the cleanest output possible. There’s also support for MQA encoding, which means you’ll be ready if streaming services decide to turn to MQA encoding to deliver higher quality audio. Meanwhile, custom EQ presets allow for easy tuning of the sound, while you can always jump in to do full EQ tuning yourself.

We’re told the DP-X1A features dual ESS Sabre ES9018K2M DACs and Sabre 9601K amps to provide a wide sound stage and the highest quality sound possible. Apparently, Onkyo even went so far as to use custom Nippon Chemicon MELODIO audio grade capacitors for better audio quality, and a low impedance circuit board has also been used to allow for optimal audio signal transfer. 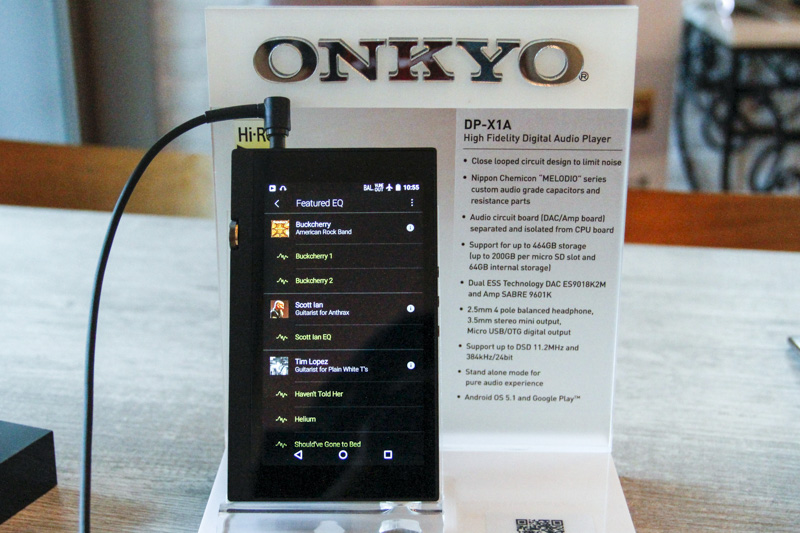 Tech details aside, we fired up a recording of Norah Jones’ Don’t Know Why on the DP-X1A, and were pleasantly surprised by the amount of detail we got from the player. You could really pick out the nuances in her vocals, and there was good clarity throughout the mids and highs - obvious from the work of the strings and the cymbals. Bass was also nicely controlled, with just about enough kick to get the piece moving.

Moving over to a live version of Hotel California by The Eagles, we were again impressed by the detail in the strings and the overall clarity delivered on the track. Bass is lush but well controlled, and there is a good amount of separation between the vocals and the backing instruments. Suffice to say, this was quite the step-up in terms of quality compared to what we got out of an iPhone! 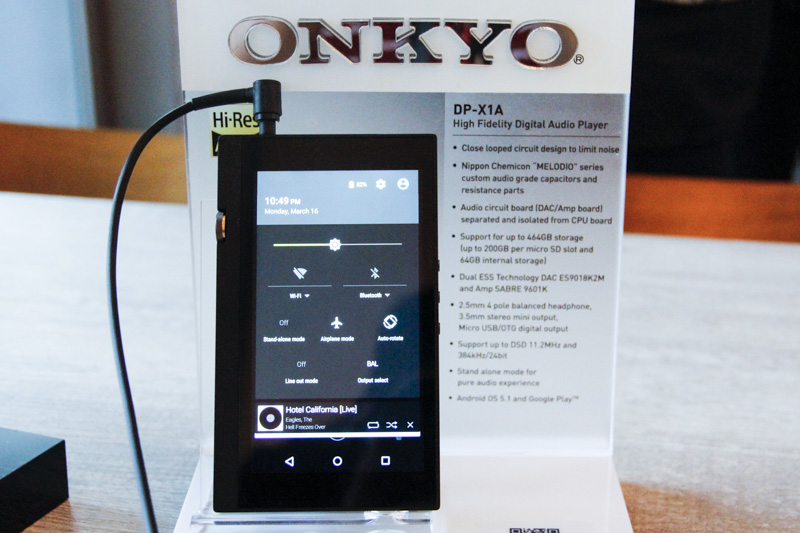 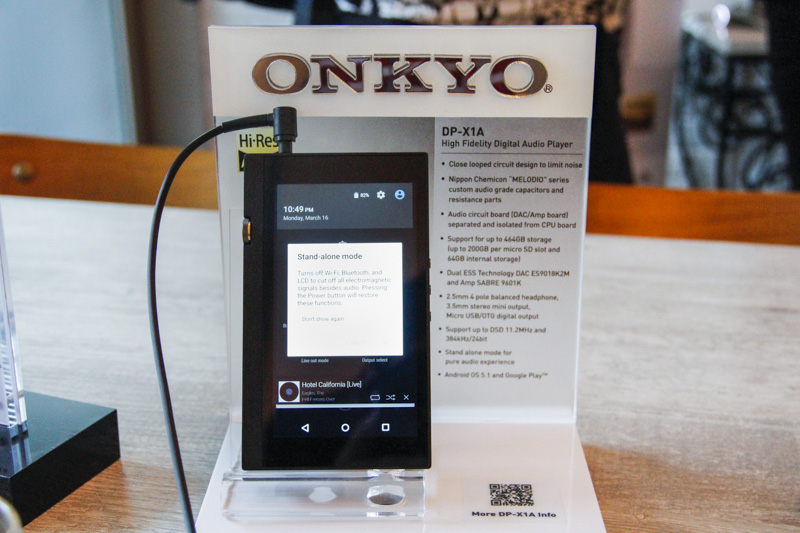 The DP-X1A also features a standalone mode which is meant to cut all sources that might create digital noise and as a byproduct, affect the sound. This means the screen, Wi-Fi and Bluetooth functions are all shut off, so your only way to control playback is via the physical buttons and dials on the side of the player. We truthfully couldn’t hear any difference with this mode activated, but it probably offers the most battery-saving way of getting extended playback, so it's a worth a try when you need it.

It's available at all authorized retailers (like Stereo Electronics, Zeppelin Café , and AV One) for S$999 now.