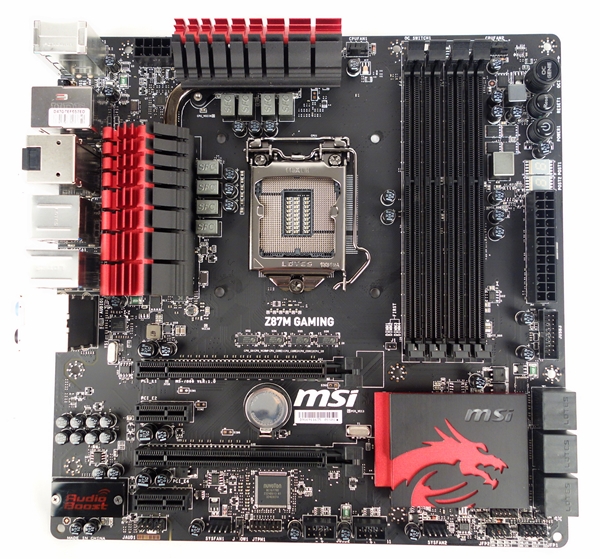 This board sports the familiar Dragoon Army color scheme of red and black. The board features the LGA 1150 CPU socket, with the accompanying Intel Z87 chipset. One of the distinguishing features of the newer chipset over the previous generation Intel Z77 Platform Control Hub (PCH), is the Intel I/O Port Flexibility technology.

This new feature will allow you to configure which of the USB ports, supported by the Intel Z87 PCH, to operate at USB 2.0 or USB 3.0 speeds. As a result, this will reduce the need for onboard third-party USB controllers due to this flexibility and increased number of USB 3.0 ports supported.  However, we have received word from MSI that support for this feature hasn't been implemented for its BIOS UEFI utility. The other major improvement pertains to the support for SATA 6Gbps ports; the number has been increased to six, against the previous generation Intel Z77 chipset's ability to drive only two of such ports.

Like its ATX counterpart, the MSI Z87M Gaming board has upgraded Military Class IV components. They include the usual Hi-c capacitors (Hi-C Cap), super ferrite chokes (SFC), along with solid capacitors (Solid Caps) and MOSFETs. The board has an 8-phase power design system. 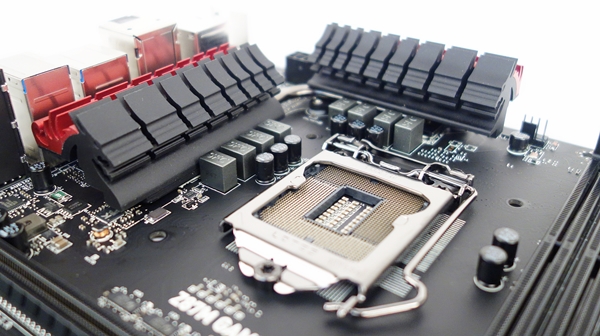 In terms of expansions slots, the board has a pair of PCIe Gen 3.0 x16 slots, and another two PCIe 2.0 x1 slots. As we know that the new Haswell processor can still only deliver 16 PCIe lanes. On the board, this single PCIe x16 link can be split into two x8 links. Therefore, the board is able to get by with just two PEG slots. By default, the first slot operates with the full PCIe bandwidth of 16 lanes, rated at PCIe 3.0 speeds. When the second slot is also occupied, the lanes will be evenly split between the two occupied slots. 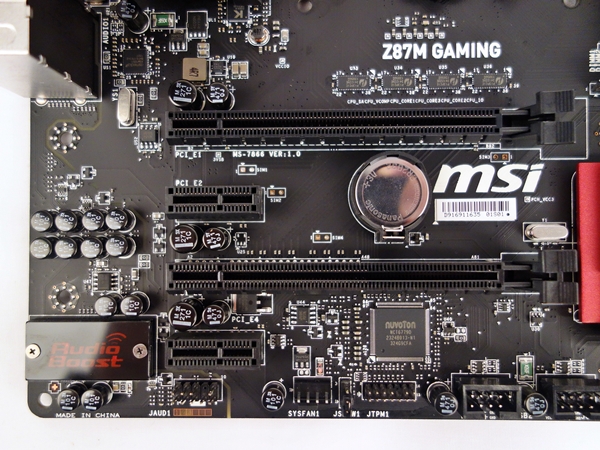 Despite its limited PCB area, the Z87M Gaming board has four DIMM slots that support overclocked memory modules rated up to DDR3-3000. The total memory capacity supported onboard stands at 32GB. Beyond the DIMM slots near the edge of the board, we see the internal USB 3.0 connector, the ATX power connector, the two DEGUB LEDs, and three onboard buttons. 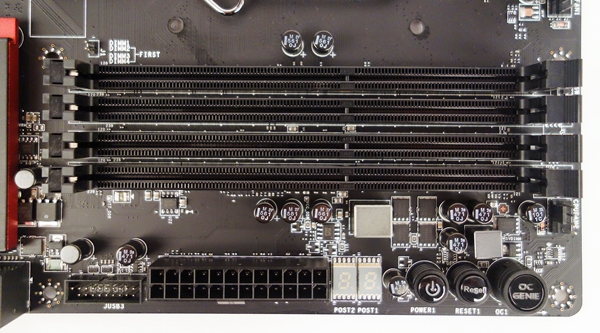 These three buttons are dubbed Easy Button 3. The OC Genie button allows for easy overclocking at the push of the button; while the power and reset buttons are handy in an open test bench environment. Once the board is installed in the chassis, any optical drives added to the rig will make them very hard to reach. A better location for these buttons would be at the bottom edge of the board where most of the internal connectors are located. 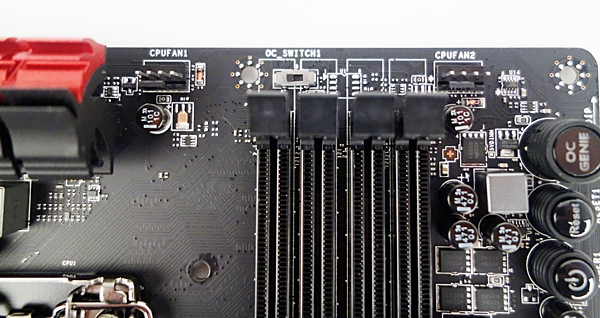 The board's Intel Z87 PCH supports up to six SATA 6Gbps connectors and there are a total of six such onboard connectors. There are no SATA 3GBps connectors featured on the board.

Moving on to the rear I/O options, we can see there are a total of six USB 3.0 ports, four of them are driven by the Intel Z87 PCH, and another two are courtesy of the Renesas third-party USB 3.0 chipset. There is the regular fixture in the form of PS/2 keyboard/mouse gaming port (optimized for high polling rates) and the pair of  USB 2.0 ports. The black clear CMOS button is located next to them. There is also a pair of eSATA ports (in red); hence, the board has a surplus of options to connect to external devices!

The LAN port, which has been colored red as usual, is powered by the board's Killer E2205 Gigabit chip. We have witnessed a slight tangible improvement in latency performance from our past experience. Do note the accompanying Killer Network Manager is supported on Windows 7 and 8 operating systems for now. For video connectivity, there are two HDMI ports and one DisplayPort port.

For audio-video fans, they would be pleased to know the board supports MSI's Audio Boost technology. For starters, the audio options of the board are powered by an onboard Realtek ALC1150 audio chip that has EMI shielding. The audio ports have a thin "gold" plating, which MSI claims will enhance the aural experience (though we all know the more tangible reason is better conductivity and prevents the connections from getting rusty over time). 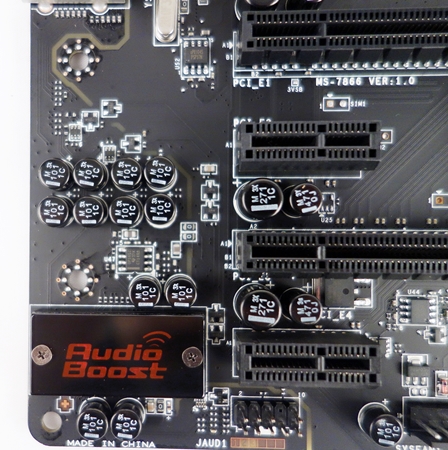 We are impressed with the rich feature set of the MSI Z87M Gaming board. They will address the needs of a mainstream gamer who wants to build a compact gaming system. Like its ATX counterpart, the board showcases the Killer E2205 game networking platform and the Audio Boost technology. Despite its size, the board is also able to support a 2-way multi-GPU setup, but the graphics cards to be chosen are each limited to a 2-slot width. For power users, the board provides the option to overclock the system with a push of the OC Genie button (and a flick of the OC DIP switch); in addition, overclocked memory modules rated up to 3000MHz can be installed. A system based on this board can also double up as a HTPC due the board's ample video connectivity options (and you can have dual digital outputs simultaneously). The board's rear USB ports are also more than enough to support external storage devices. The MSI Z87M Gaming board is a nifty feature-packed board with an attractive price tag of S$299.