Note: This article was first published on September 21, 2016. 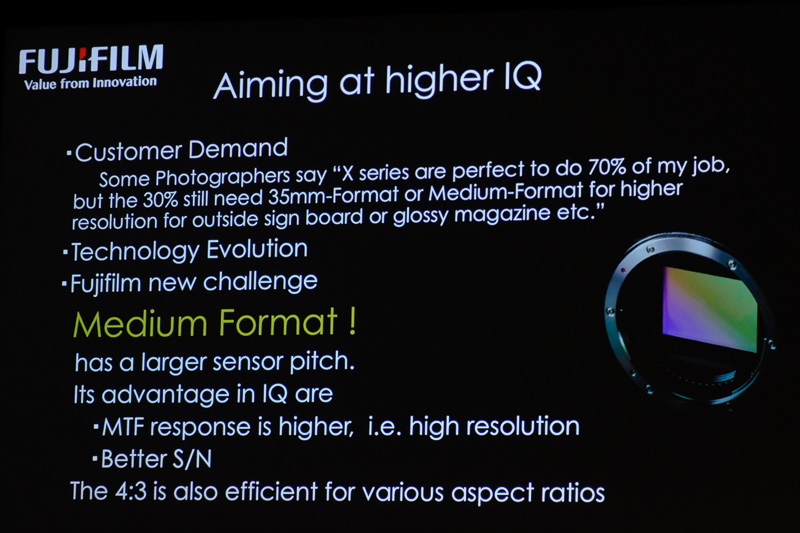 As we mentioned in this news piece here, the first camera from Fujifilm’s new GFX series is the GFX 50S. It bears a very strong physical resemblance to the X-T2, but has a larger medium format 51.4MP sensor that measures 43.8 x 32.9mm. This is apparently in response to the small percentage of Fujifilm's customers who found that they had some situations (like demanding jobs) where the current X-series cameras couldn't provide enough resolution.

Rather than to create a full-frame camera, Fujifilm decided to jump to the larger medium format so that the camera can also offer a variety of aspect ratios. We were told the GFX 50S is built to be able to shoot the moment with a quick response, as well as have a short shooting interval between shots. 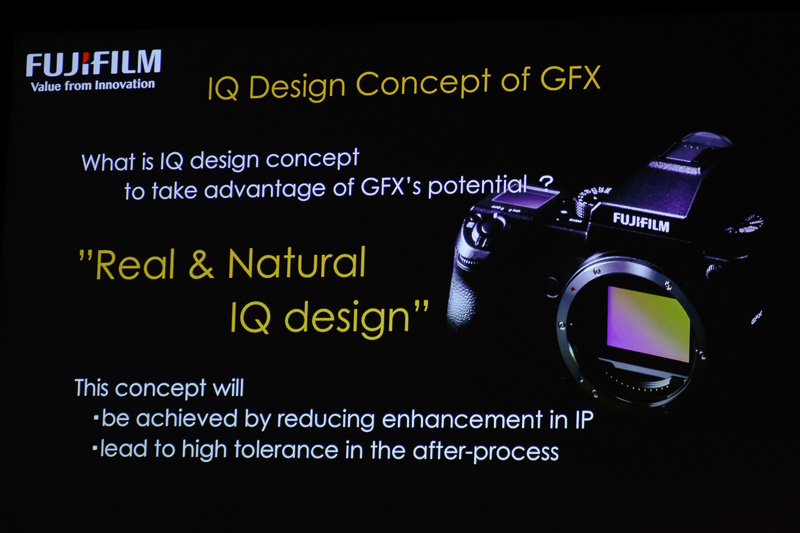 The larger sensor also means the GFX 50S will have a better signal to noise ratio and higher MTF response, allowing the new camera to create images with more detail and with greater image quality than ever before. The camera is also said to be created with the design concept of “Real & Natural IQ design”, which basically means that the files created will be ready for use straight out of camera. And if any post-processing needs to be done, there will be “high tolerance” for changes. 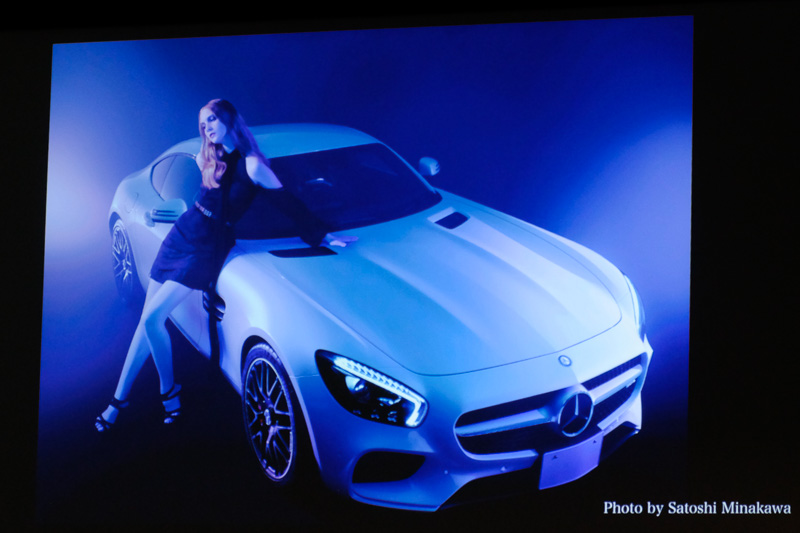 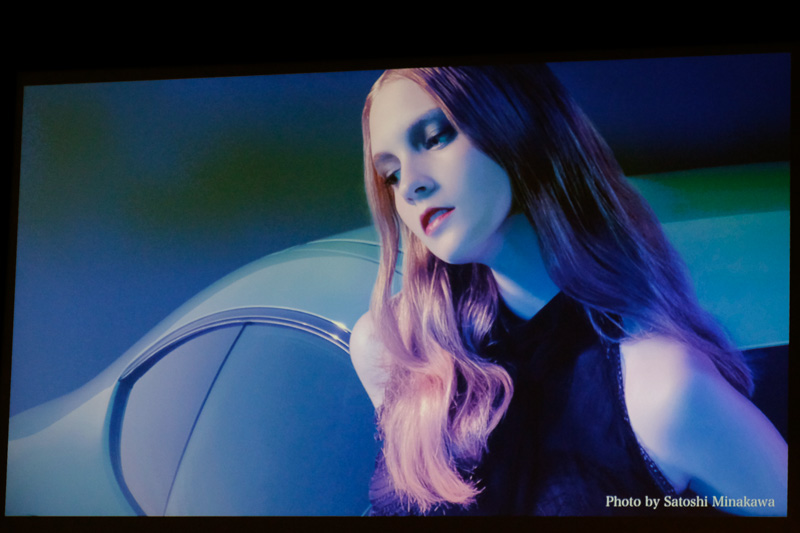 Moving on to the body itself, the first thing we found was that the body fits comfortably into the hand, even with the extended battery grip attached. The knurled dials are a little larger than what’s found on the X-T2 and X-Pro2, better matching the larger dimensions of this new body and also making them easier to turn from behind the optional EVF when it's attached. 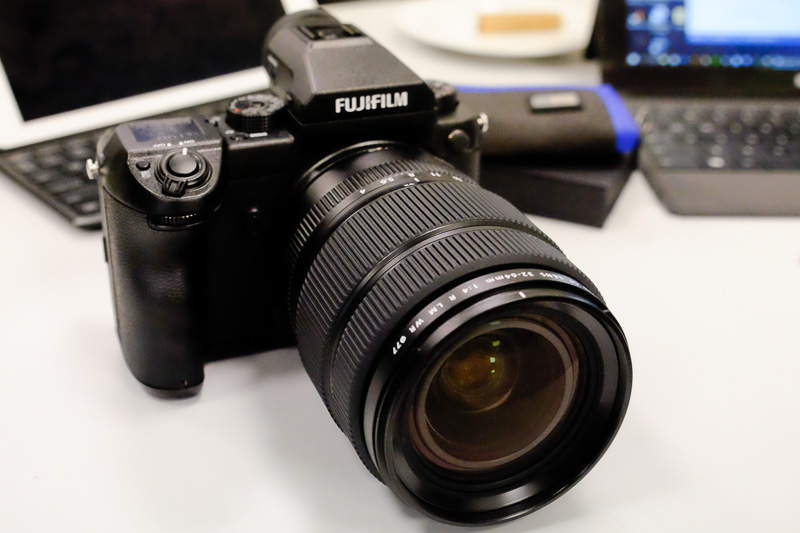 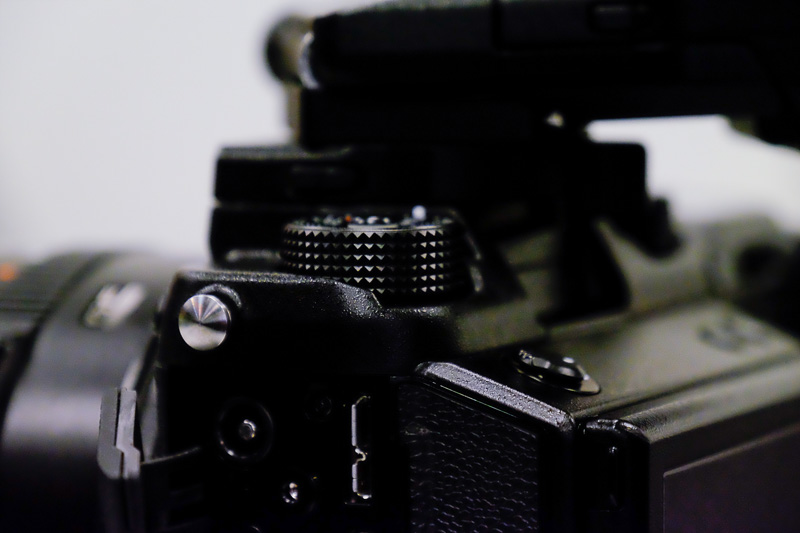 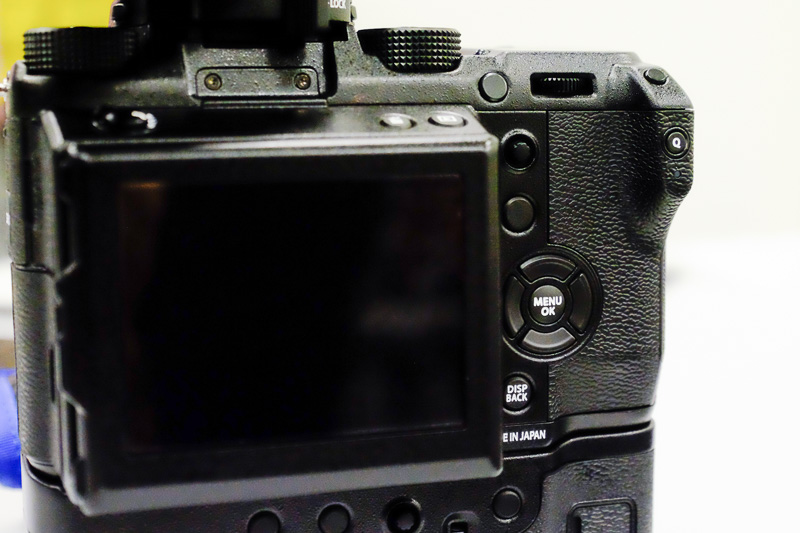 If not for the bulge behind the rear LCD, you’d certainly be forgiven for thinking you were looking at the rear of the X-T2. The Q-menu is again present, but the button is much smaller in size and tucked well away into the thumb grip on the right of the body. Turning the camera to the right reveals dual SD card slots, keeping in line with what Fujifilm has been offering thus far. 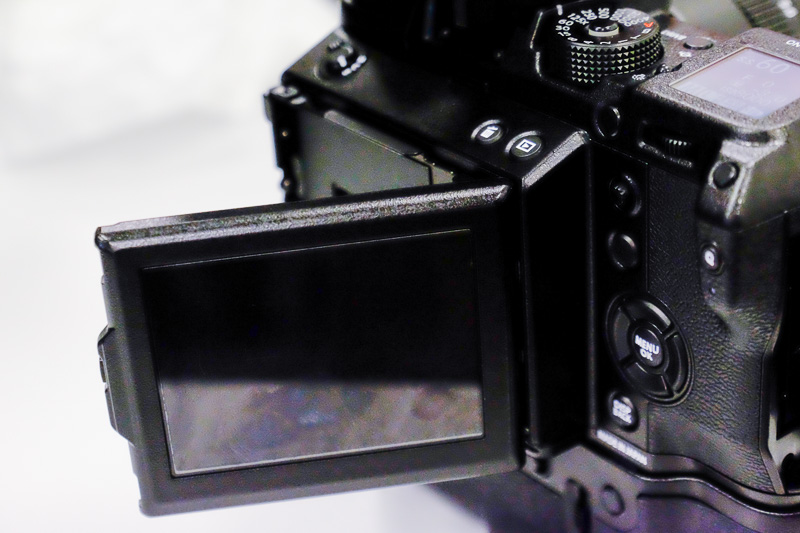 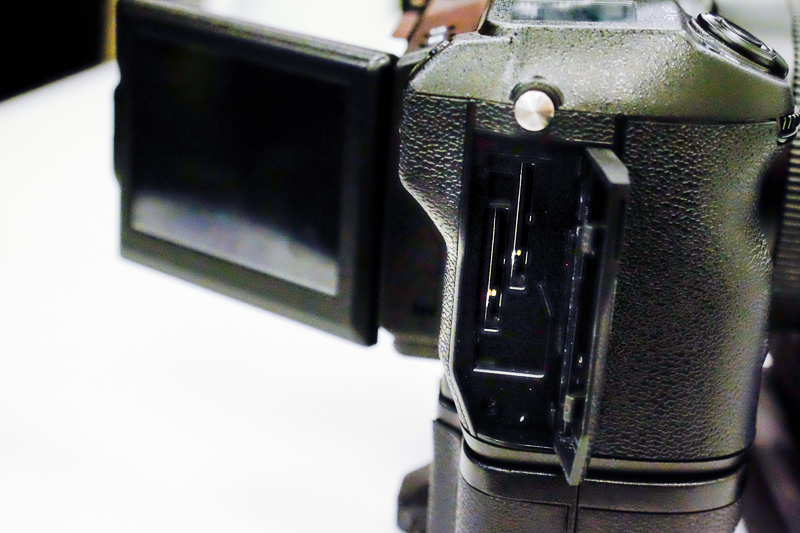 The left side holds another set of ports behind two rubber flaps - a USB 3.0 port and a mini-HDMI port that forms your base interface from camera to PC or external monitor, while what looks to be audio jacks allow for audio out from the camera. Also located on the left is the battery compartment. As can be seen in the picture below, the new battery is about twice the width of the X-T2’s battery, while staying about the same height. 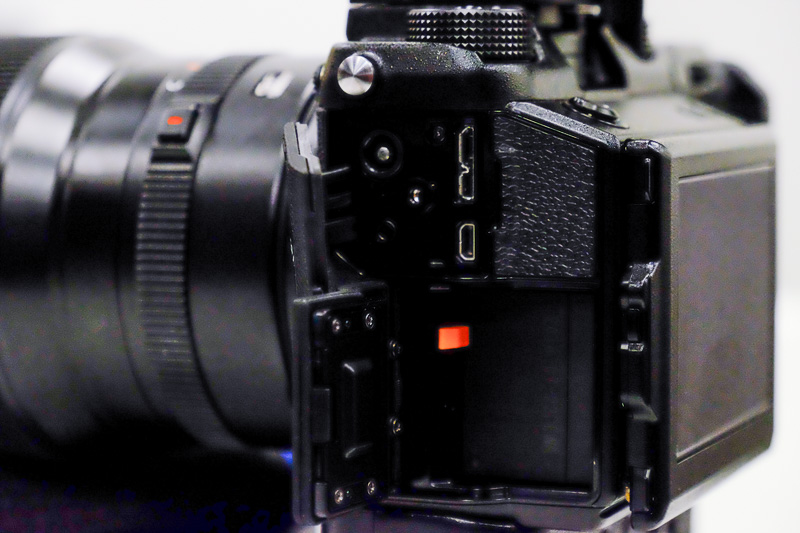 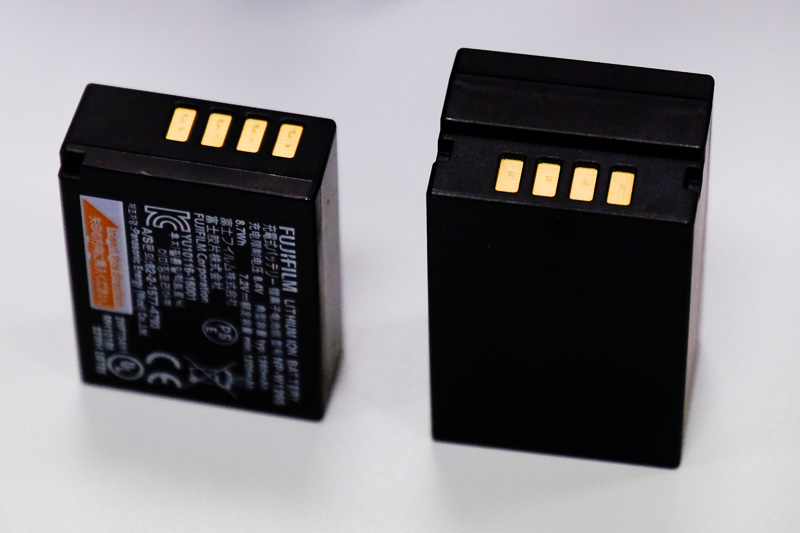 The top LCD is nice and large, and shows the shooting information with large characters even after the camera is turned off. We’re told the new camera will use a focal plane shutter with flash sync set to 1/125s, but Fujifilm is open to the possibility of allowing for compatibility with lenses that have leaf shutters, thus allowing the option of using such lenses to get higher X-sync speeds. 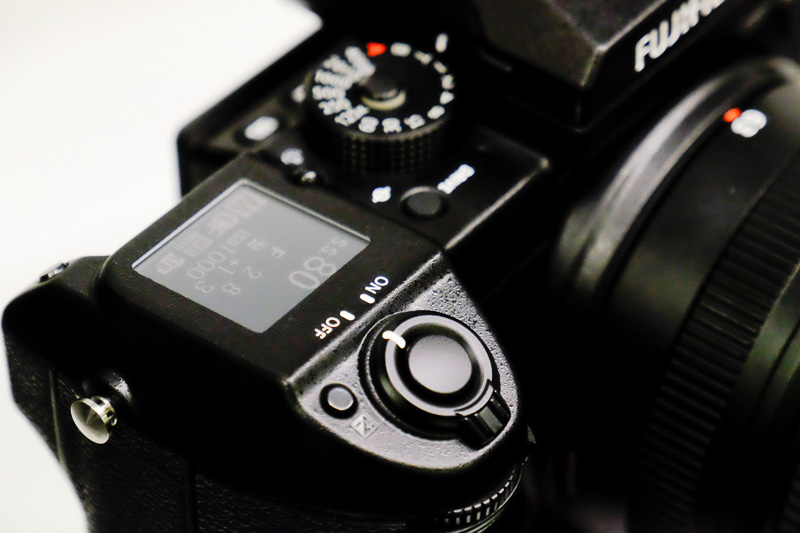 We handled both a mock-up unit with the optional waist-level EVF and a functioning one with the regular EVF (included in the kit), and found that the body certainly felt significantly heavier than any other X-series camera, especially when combined with the new GF32-64mm F4 R LM WR lens. However, the handgrip was also significantly deeper, allowing us to get a good grip on the camera.

The waist-level EVF allows a side-to-side tilt of about 45 degrees and also tilts up 90 degrees, so you can use the camera from above or to the side, making it quite handy for portrait work. We can’t say how clear the display on that is as the unit we were given wasn’t a working model, but the refresh rate on the regular EVF (that’s included with every purchase) seemed on par with at least the original X-T1. 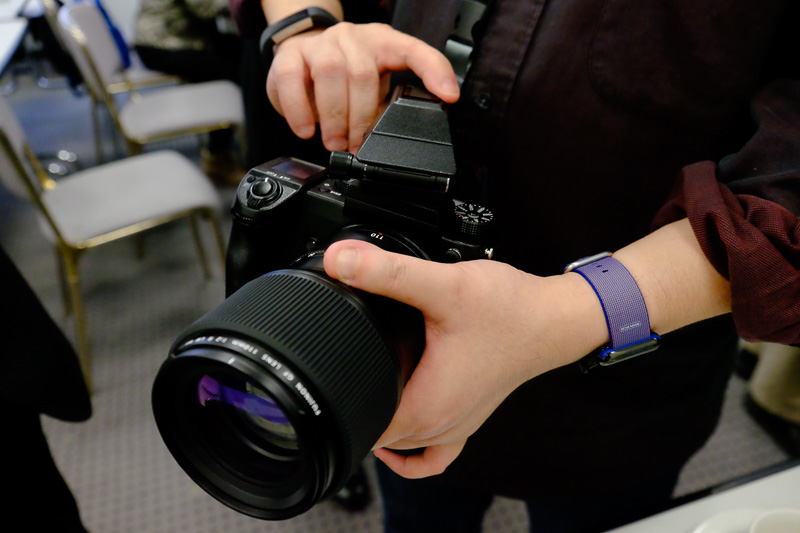 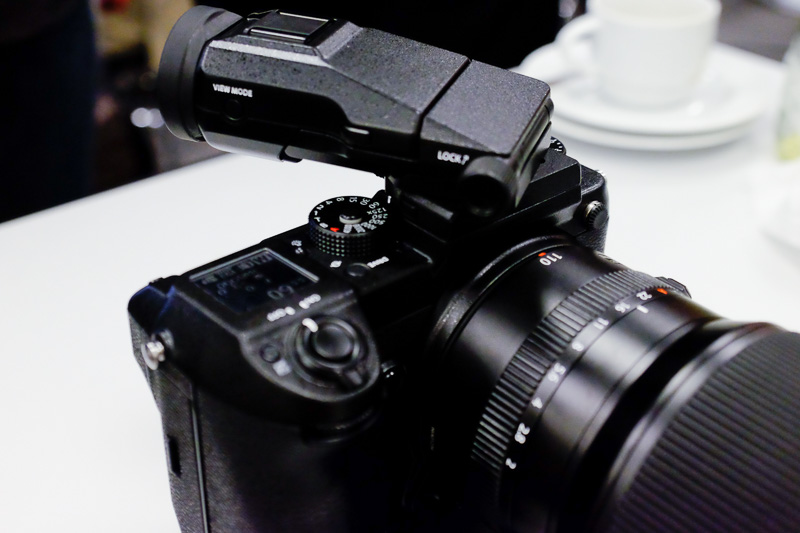 Focusing seemed to be fairly fast and accurate as well, especially when compared to some of the other medium format cameras we’ve handled thus far, like the Hasselblad X1D. It seems that the GFX 50S will only have contrast detect AF, but Fujifilm says that the number of focus points is not finalized yet, and that they are still being optimized, so we’ll have to hold off comment for now.

The one last thing we were able to get from the session with Fujifilm was that the sensor in the GFX 50S won’t be an X-Trans sensor. Rather, it will use a custom Bayer filter array because the resolution from the physically larger sensor is more than adequate to resolve 99% of any subject. Hence, they don’t see the need to use the X-Trans format sensor with this camera. 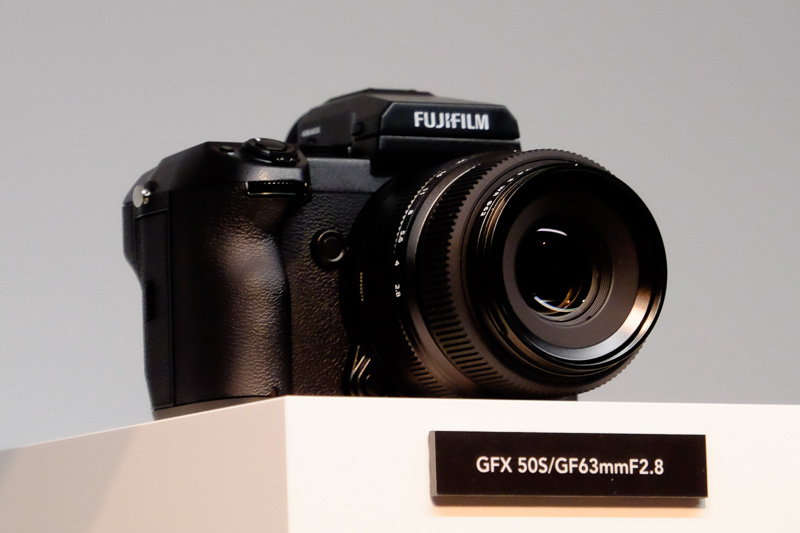 Given that the camera is perhaps six months away from sale (early 2017 is given as the indicative date), we really hoped that more details would be final at the press session. However it seems that Fujifilm is keeping most of its cards to itself, so all we can say for now is that the camera body is about the same size and weight of a prosumer-level 35mm full-frame DSLR, but has autofocus performance at least on par with any of the medium format offerings we’ve handled so far. Still, Fujifilm seems to have quite an enticing product on its hands.