The ROG Phone will be available for pre-order starting from today till 16th November.

During the pre-order phase, customers will receive a free ROG bumper case (worth $59) and a
screen protector (worth $20) with every purchase of the ROG Phone and also the option to purchase the
entire suite of ROG Phone accessories and a limited edition ROG suitcase at just S$999 (usual: S$1,484)
with every pre-order.

Pre-orders of the ASUS ROG Phone has started in the U.S. through Amazon and Microsoft. Shipping will begin on Oct 29.

Razer revived the idea of a gaming phone last year with the Razer Phone, but that phone turned out to be an awkward proposition because it wasn’t immediately clear what made it a phone for gamers. Other than the 120Hz screen and maybe the Game Booster app, its specifications and design didn’t seem too different from other flagship Android phones at the time.

So when ASUS first announced the ROG Phone, my initial reaction was scepticism. However, that appears to have been misplaced, as the ROG Phone appears to be a gaming phone with actual gaming features.

That may seem like an obvious statement to make, but the Razer Phone has shown that we should take proclamations of so-called gaming phones with a pinch of salt. 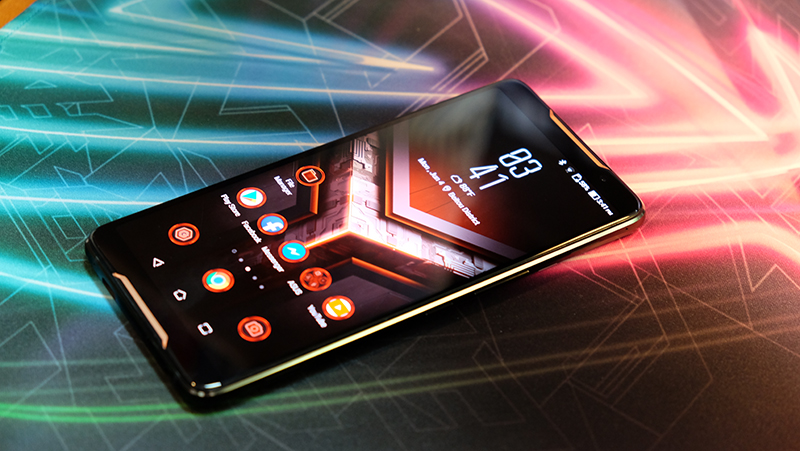 Having said that, the ASUS ROG Phone is a seriously impressive bit of hardware that looks like it could really appeal to the hardcore mobile gamer.

For starters, it is equipped with a “speed-binned” 2.96GHz Qualcomm Snapdragon 845 chip. These are really the fastest Snapdragons around (they’re usually clocked at 2.8GHz), so there’s already something that helps differentiate the ROG Phone from the multitude of other Snapdragon 845-equipped phones.

It also offers a 90Hz AMOLED panel for a more fluid experience, and the 6-inch display boasts a crisp 2,160 x 1,080-pixel resolution, 18:9 aspect ratio, and a 1ms pixel response time. In addition, it comes with HDR support and a nice 108.6 per cent coverage of the DCI-P3 color space.

The 90Hz refresh rate isn’t quite as fast as the Razer Phone’s 120Hz Sharp IGZO panel, but it is reportedly still the fastest OLED display on a smartphone right now. The device will also feature a whopping 8GB of RAM, which is what you’d expect from such a performance-oriented phone.

The cameras are the same as on the ZenFone 5, so you’ll find an 8MP front camera and 12MP/8MP dual cameras at the rear. The only difference is that the ROG Phone lacks the AI features found on the ZenFone 5, but I don’t see many folks missing this too much. Here’s a rundown of the phone’s specifications:

In order to keep all that hardware cool, ASUS has gone with a “3D vapor-chamber cooling system”, which comprises a copper heat radiator and carbon cooling pads attached to the circuit board. ASUS says this provides 16 times the heat dissipation area available to a regular smartphone, thus extending CPU peak endurance by up to five times.

But the hardware aside, it’s clear that ASUS has put quite a lot of thought into how gamers are going to use the phone. The phone has not one, not two, but three USB-C ports. There’s one in the usual spot at the bottom, but there are also two conjoined ports on the left. The latter is designed to allow the phone to be charged more comfortably while you’re gaming in landscape mode. There’s also a reason for why the ports are joined together, and that’s to accommodate a clip-on cooler that comes with the phone (more on that later). The ROG Phone also retains a headphone jack at the bottom, which is really the only sensible option if you’re going to make a so-called gaming phone. And when you consider that Razer omitted the headphone jack on the Razer Phone, it’s difficult not to appreciate ASUS’ attention to how its audience is likely to use the phone.

Another interesting feature is the presence of three ultrasonic sensors, two on the right (called AirTriggers) and one on the bottom left. The ones on the right act as programmable shoulder trigger buttons for gaming, while the third works in conjunction with its counterpart on the right to launch apps or wake the phone.

When squeezed together, they can wake the phone or launch the camera, depending on how long you squeeze them for. In addition to haptic feedback, there’s a visual indicator when the sensors register your squeeze, and you’ll notice a bright red glow seeping out from the edge of the screen where the trigger buttons are.

Then there’s something called X Mode, which is also activated by squeezing the sides of the phone. This mode kicks the phone into high gear and automatically optimizes the phone for gaming by killing background processes and giving your game priority for RAM allocation and data transfer. Design-wise, the phone is very obviously an ROG product. The front is pretty clean, but the rear is bordering on ostentatious, with a glass, mirror-like finish, plenty of aggressive lines and angles, and an illuminated ROG logo. 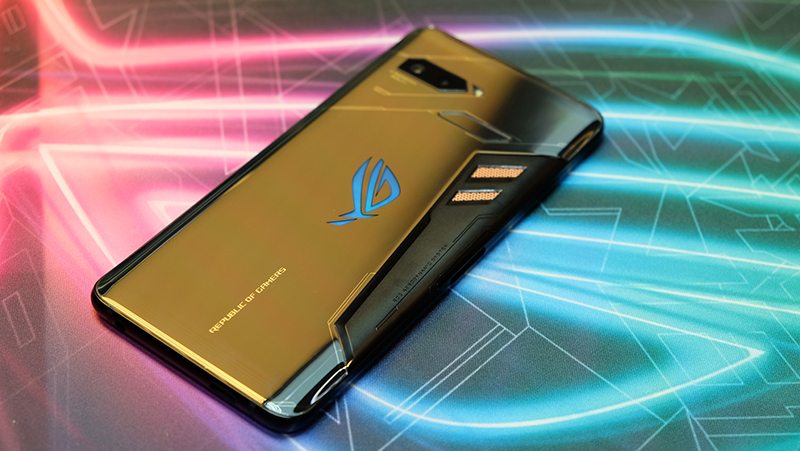 The logo backlight can be programmed using a dedicated app, but you can also synchronize it with other Aura Sync products. In fact, you can sync up to five different ROG Phones. It may not be a coincidence that this is the number of players in many esports teams, and it’d look pretty neat if teams took advantage of this feature.