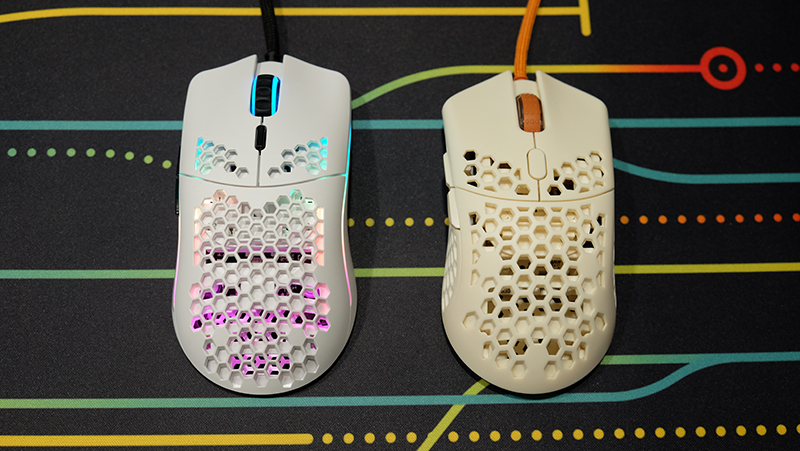 How small is too small?

2019 has been the year of holey, ultralight mice. There have been some notable exceptions, such as the Razer Viper and Endgame Gear XM1, but those are relatively heavier at 69g and 70g respectively. So far, it seems like if you want to make a mouse really, really light – say, under 60g – you'll have to poke some holes in it.

That said, while there's been a slew of esports-oriented mice in recent months, few have been more hotly anticipated than the Finalmouse Ultralight 2 and Glorious Model O-. Both of these are some of the smallest and lightest mice to be released, and they join the Cooler Master MM710 in offering compact shapes that are better suited to claw and fingertrip grippers.

But is one better than the other? Here's a closer look at the both of them.

Let me just start off by saying that the Ultralight 2 is really tiny. It's smaller even than the Model O-, which is itself a smaller version of the original Model O. Here's a look at how their dimensions stack up:

The roughly half-centimetre difference in length may seem minuscule, but it actually feels really obvious after switching back and forth between the two. 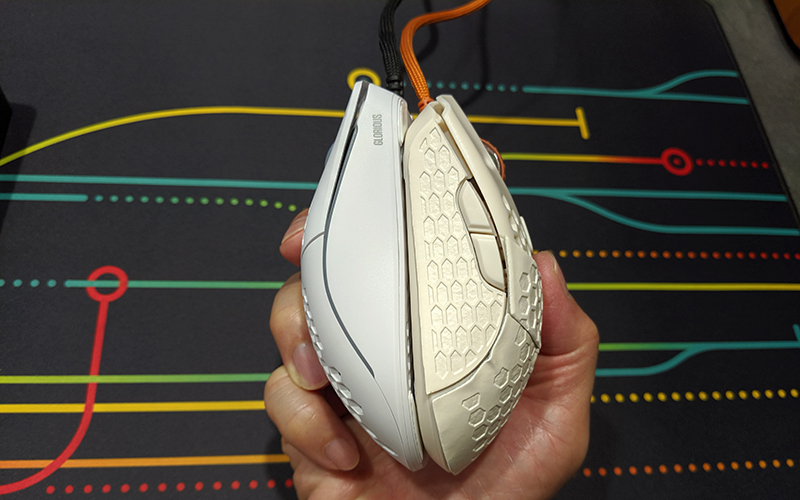 When it comes to grip style, it feels like the Model O- might be better suited to the fingertip grip, while the Ultralight 2 works better with claw and to a certain extent palm grip, although the latter only really works if you have smaller hands. 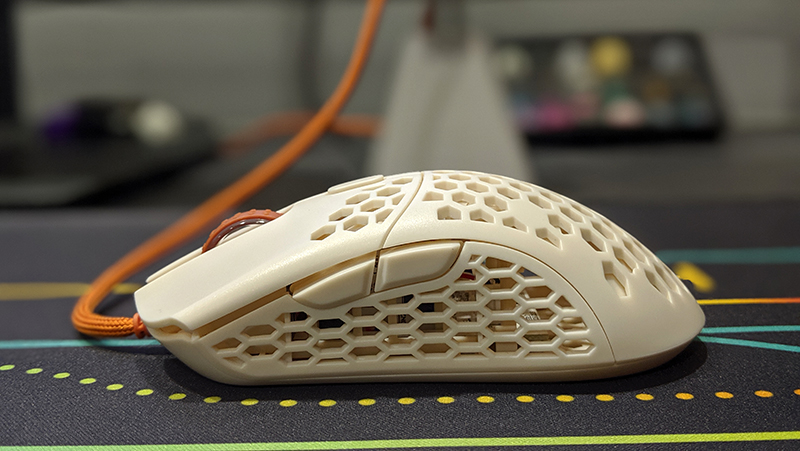 The Ultralight 2 supports your palm better because of its slightly more prominent hump, while the Model O- has a more low-profile shape. That said, I'm able to palm the Model O- as well, but I also have rather small hands at just 16.5cm long, so you can use that as a rough guide as to whether or not it'll be suitable for you. 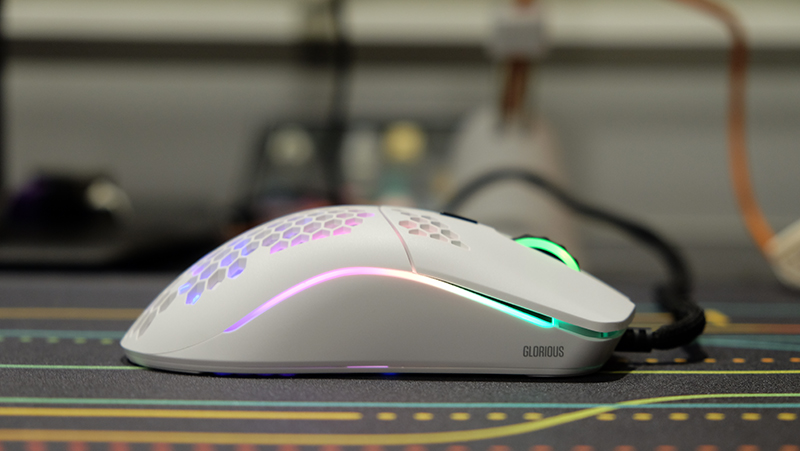 The longer length of the Model O- also means that you don't have as much room to manoeuvre the mouse, such as when you want to pull it down using just your fingers. That's because the longer body reduces the amount of space there is between the back of the mouse and your palm. Once again, I only noticed this because I have smaller hands. The Model O- is already significantly smaller than its bigger brother, and it'll probably be fine for most people.

That aside, both are very slim mice in the middle, and the main differences are in the length and height. Unlike with the Cooler Master MM710 or Zowie S2, I didn't feel like they need to shave off any more millimeters down the middle.

In terms of size and shape, there's no doubt that the Ultralight 2 fits me better, but that's really a matter of personal preference. However, the Ultralight 2 also has one more trick, or should I say gimmick, up its sleeve to appeal to those of you with larger hands. It ships with three packs of Infinity Skins of varying thickness, and you can pick from 1.2mm, 2mm, or 2.5mm skins. 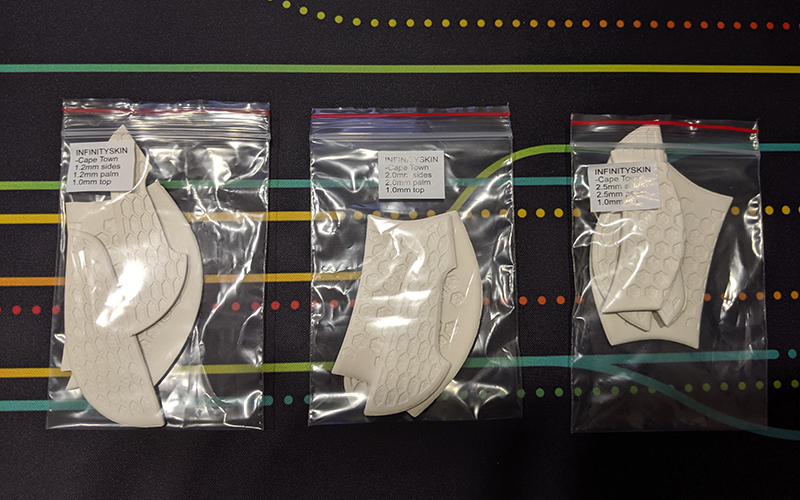 The skins are made of a "foamposite" material that is kind of squishy to touch. They have 3M backing tape on them and are supposedly made to be reusable. I have my doubts about that, but at the very least, the adhesive still seemed quite strong even after reapplying it a few times.

That said, I'm really not a fan of the Infinity Skins. Aside from the fact that they're basically expensive grip tape, the idea that they're made to be stacked one on top of another to suit larger hands sounds ridiculous to me. I'll just let the picture below do the talking.

The mouse is certainly big now, but it looks and feels awkward. When holding the mouse in this state, I can clearly feel where the skins start and end. It's distracting, to say the least, but the biggest problem is that the side buttons are now recessed, which makes them really hard to press. This is a problem even with the thinnest 1.2mm skin – the buttons are flush with the surface, which still makes them more difficult to access. If you use the side buttons for building in Fortnite, forget about using the skins. 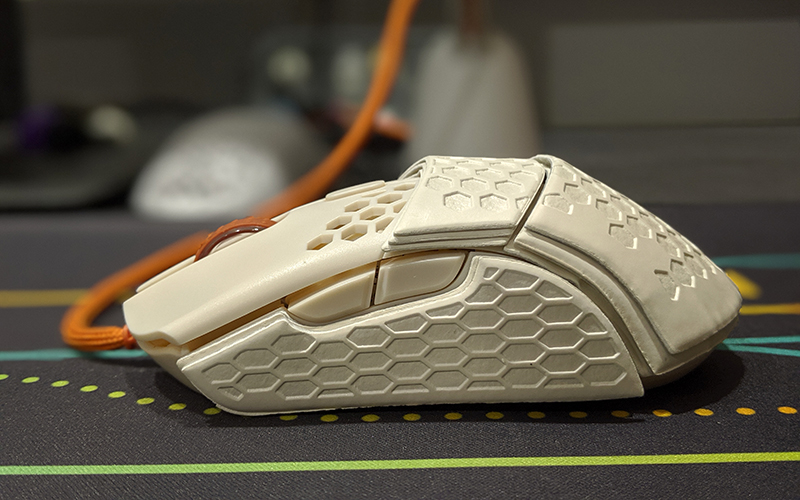 If you look closely, you can also see the top piece starting to lift shortly after application. Overall, the Infinity Skins feel like an inelegant solution to a problem that doesn't really exist. If you want a bigger mouse, you should just go get a large mouse that fits you. Don't buy a small mouse and then stick skins on it to make it bigger. 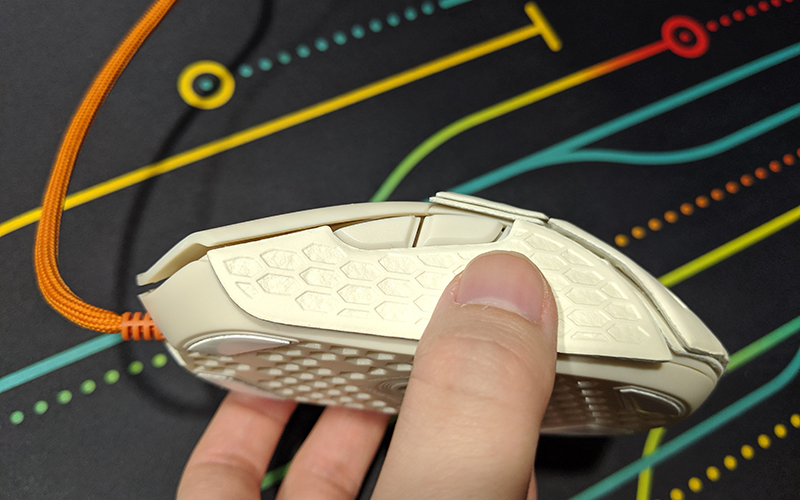 The most feasible application of the skins is probably to just stick to the thinnest 1.2mm set. You can leave out the left side grip, since that causes problems with the side buttons, but you can still apply the skins to the top and right side. The mouse is still quite comfortable this way, and it covers up the holes if you don't like them.

A final thing to note – the skins do leave some sticky residue behind, so be prepared to wipe that away with some alcohol swabs. 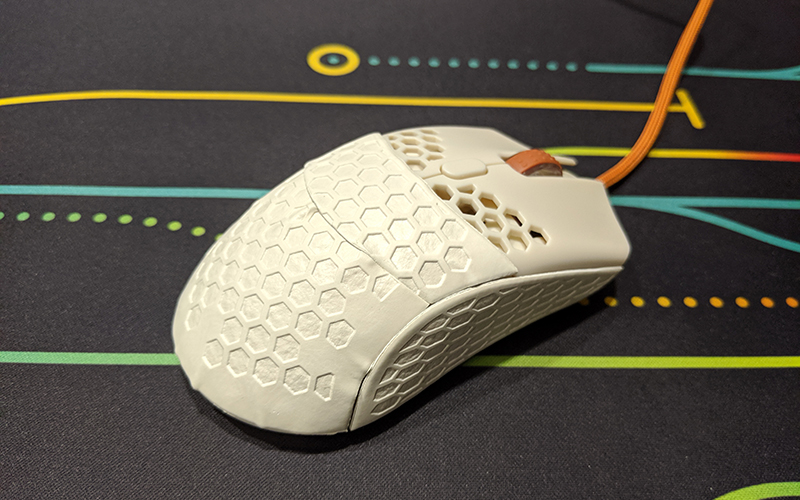 Both mice are quite well-built, although I'd have to give a slight edge to the Ultralight 2. While there are no major issues like rattling or flexing, the Model O- does have noticeably more button wobble than the Ultralight 2. It's easy to move the left- and right-click buttons from side to side, whereas the buttons on the Ultralight 2 are more firmly anchored in place. 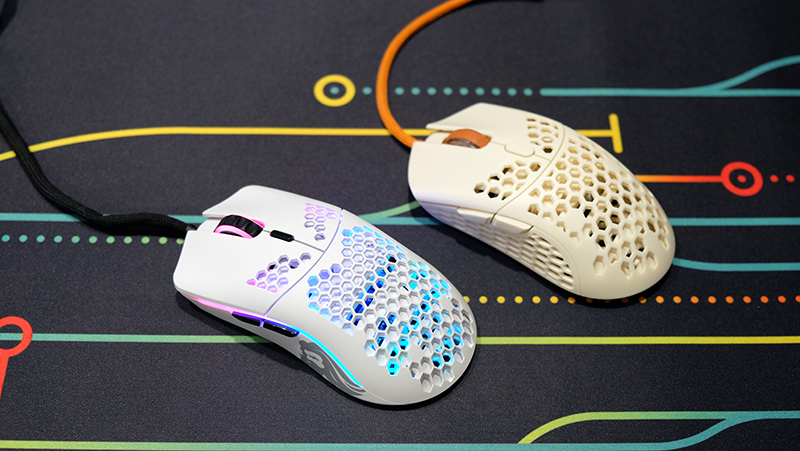 That said, this isn't something that bothered me when I was using the Model O-, and you'll have to actively be looking for it to notice it.

Buttons on both mice still feel really good, with no discernible pre-travel. I particularly like the side buttons on the Model O-, which are crisp and pleasantly springy.

In addition, the Ultralight 2's cable just feels and looks better. While the Model O- has a slightly more supple cable, the Ultralight 2 uses a narrower cord that looks much neater. It is free from kinks throughout and has a uniform appearance. On the other hand, the Ascended Cord on the Model O- is thicker and looser, with small kinks in the cable as well. 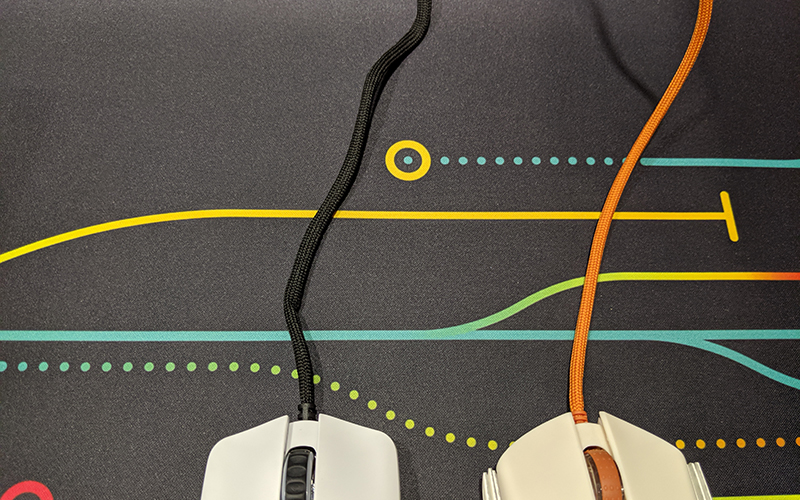 Having said that, I want to stress that the cables on both mice are excellent. There's nearly zero drag and the fabric weave is really flexible. And all that won't even matter if you want to replace it with an actual paracord cable, which is even more fluid.

The Model O- is available in both glossy and matte finishes. I have the matte finish, which is better for humid climates or sweaty palms. On the other hand, you might prefer the glossy if you have dry hands. The Ultralight 2 uses a matte-textured plastic too, which Finalmouse refers to as a "raw composite" base. What this means is that the plastic hasn't been treated or coated with anything, a necessary step to prevent the application and removal of the Infinity Skins from degrading the coating. 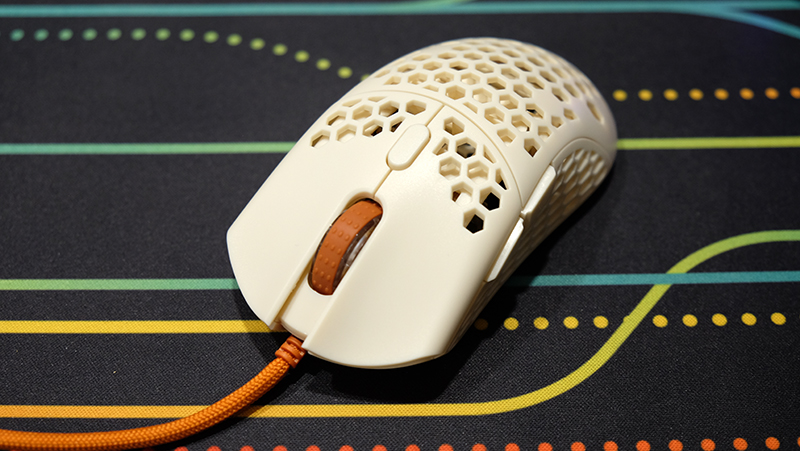 However, I prefer the scroll wheel on the Model O-. It has more clearly defined notches and grooves cut out into it, which feels more precise to me. Conversely, the scroll wheel on the Ultralight 2 is a lot lighter and it'll have you breezing through the individual steps like they're nothing. That aside, both scroll wheels are smooth and relatively quiet, which is arguably the most important part of the design for me.