Hands-on: Singapore-made Gloom and Doom is a visual novel about being stuck in a routine 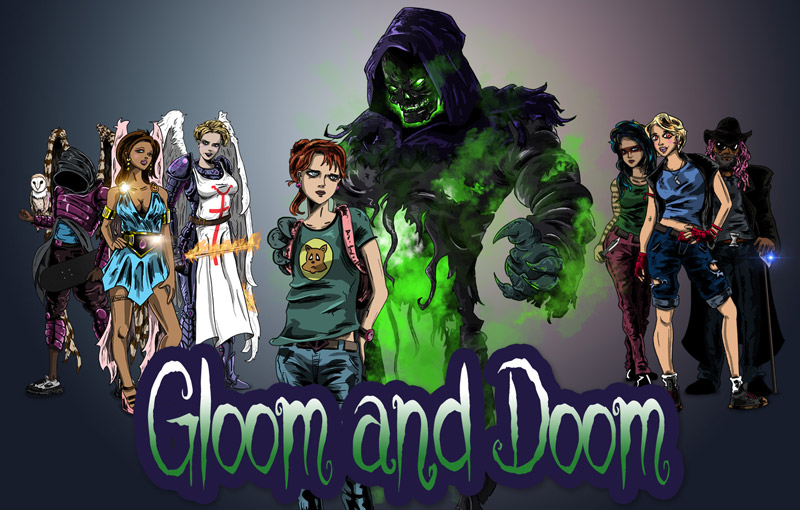 What happens if the monster under your bed doesn’t want to be a monster anymore?

Gloom and Doom is a visual novel game developed by Singaporean Drew Pan, Sole Designer at Neo Tegoel Games. The game is an unorthodox horror story. Yes, ghouls and demons are around and murdering folks - and yes, there is an apocalypse on the horizon - but Gloom and Doom simply uses all this as set dressing for a painfully relatable story.

We had the opportunity to try out an early build of Gloom and Doom before its official release date later this month (January 2021). As a fan of horror and an even bigger fan of fresh twists on the genre like this one, I was more than happy to give it a go. Here’s what I thought of it!

Stuck between life and the afterlife 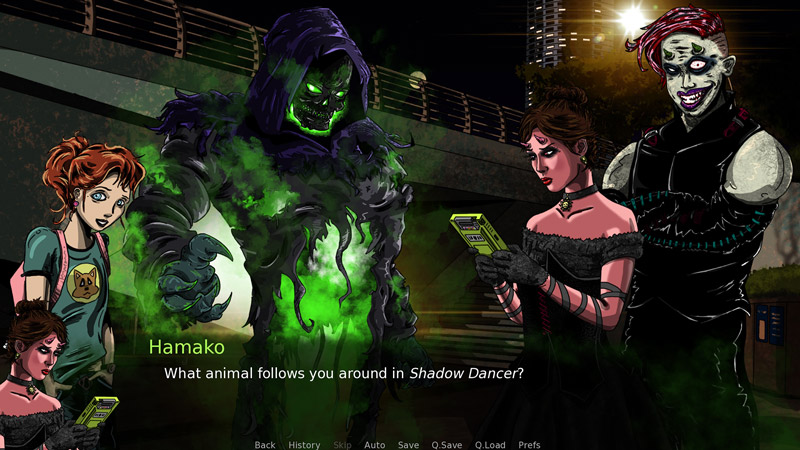 Gloom and Doom features dual protagonists, each leading their own lives before their paths finally intersect. One is Gloom, a bitter old ghost trapped in a loop of murder he struggles to get out of. The other is Wynona, a young woman who feels like she’s stuck in a routine - which is the least of her worries, considering that she’s also destined to become the Doom-Bringer, a figure who triggers the apocalypse.

Gloom is a demon-killer, tasked to slay endless waves of detestable souls by an angel. He’s been promised that once he kills enough demons for the angels, they’ll let him ascend to heaven. When the story picks up however, Gloom is beginning to lose faith in this repetitive routine. It's been years. He’s not going to get into heaven anytime in the near future, so he’s told, but he can’t give up now. The wraith is stuck in a murderous rut.

And then you have Wynona, an ordinary woman who tolerates a dead-end job and whiles away her time with Portishead albums and retro games (at the time, not so retro). At night however, nightmares of the end of the world plague her. She sees a burning world and demons running amok. Eventually, we learn that she’s tried to kill herself to avoid her destiny - but she simply cannot die. Much like Gloom, she’s stuck on a path she doesn’t want to be on. 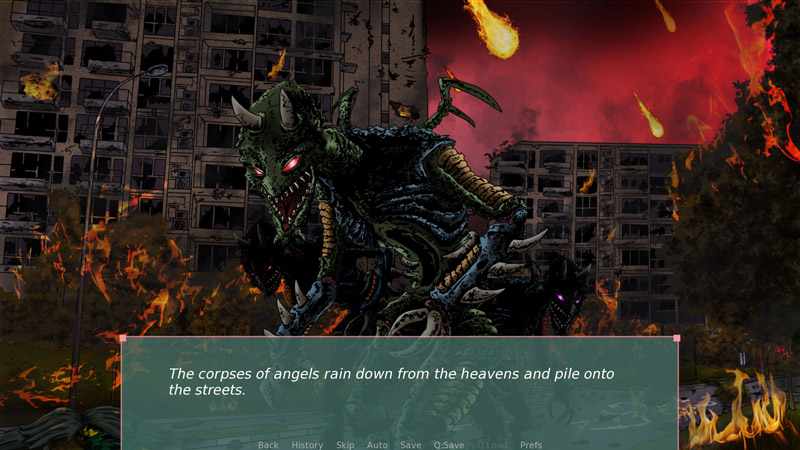 In a news release, Drew Pan explained that the story was fueled by his university experience. “When I was in uni, my roommate was stuck in a dead-end job, another friend was caught in a toxic relationship, and I didn’t know what I wanted to do with my life other than play video games,” said Pan. “After being forced to watch Ju-On, I became obsessed with how horrifying it must be as an immortal ghost doing the same thing over and over again.”

Gloom and Doom definitely captures the horror of being a powerful demon who’s also a slave to an endless routine, but the pop culture references don’t stop with Ju-On. In the same news release, Pan notes that Gloom and Doom possesses a quirky tone reminiscent of movies like Before Sunrise, and that’s exactly what got me so excited about this game in the first place. Before Sunrise has two people meet and go on talking to each other for an hour and a half. Once they’re done, the movie ends. Somehow, their journey is still enthralling - even if it's just 'Conversation: the Movie'. Gloom and Doom is a visual novel, and it knows that if you want to capture the spirit of something like Before Sunrise, you need the writing to back it up.

And hey, the writing doesn’t disappoint here. You play as Gloom and Wynona for quite some time before they even meet each other, which allows you to learn more about what they’re dealing with separately. Once they run into each other, it feels like an event - despite it being downplayed as much as possible. Wynona isn’t even impressed when she meets Doom, a horrifying-looking demon with a ghostly blade who’s been sent to kill her. In fact, she asks him to speed it up. She wants to die.

It’s the witty back-and-forth between Gloom and Doom that makes this game work for me, as well as the small melancholic moments we get here and there - like Gloom reflecting on a past love sullenly, or Wynona lamenting her cruel fate. It really helps to flesh the pair out, and build upon their relationship in a believable way. The story is also packed with jokes, to the point of almost sounding like a Joss Whedon project - but it works. It keeps the story from feeling one-note. 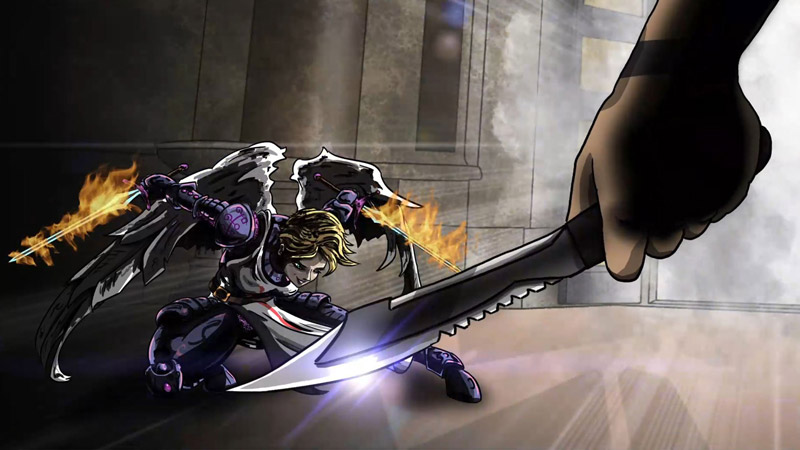 Of course, Gloom and Doom has more to offer than the titular duo. Throughout my time with the game, I met a colourful array of side characters, ranging from skateboarding angels to corporate-like demons. The visual novel constantly throws choices at you that can affect your relationships with these characters, or how certain scenes play out. For example, when Gloom was tasked to kill a certain horned demon, I had him rip off her horn instead of outright killing her. Later on in the story however, she reappeared and begged Gloom to end her new, depressing existence.

Gloom and Doom has seven different endings - so it’s safe to say that your choices matter. Of course, I can't talk about a visual novel without mentioning the art. These character designs look like they popped out of old comicbooks, and they’re all wonderfully distinct from each other. The art style is really striking, but I have to admit, it’s one I had to grow to like over time. It takes getting used to, especially if you’re not coming into it with some level of 90s nostalgia - though I could say that about the game as a whole, too.

The end of the world is just around the corner 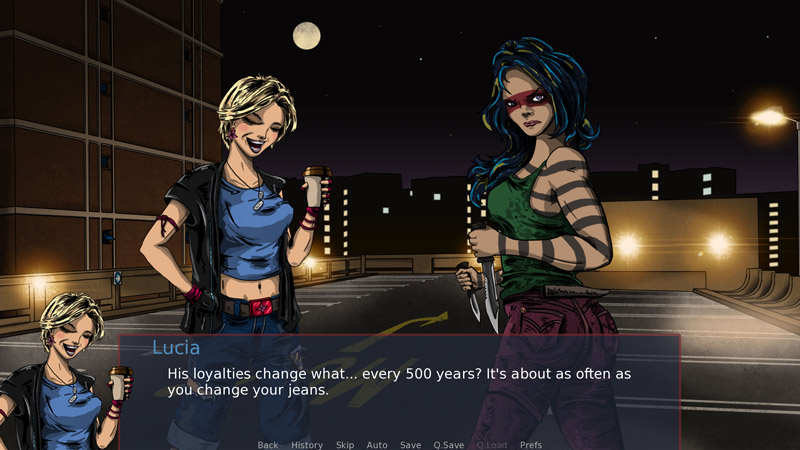 I liked Gloom and Doom a whole lot more than I thought I would. I’m not usually one for visual novels, but this one really grabbed me. Its characters feel fresh and well-written, and their layered personalities add a lot to an otherwise slow-moving plot. There are long stretches of time where Gloom and Doom just…talk to each other, and this lack of action might frustrate some players, but I personally loved those moments the most.

Gloom and Doom is a promising sophomore outing for Neo Tegoel Games, that’s for sure. I can’t wait to see what Pan comes up with next.