How much can Intel squeeze out of their 10nm Intel 7 process? Turns out plenty. A look into 13th Gen Core 'Raptor Lake'

Note: This feature was first published on 28 September 2022. 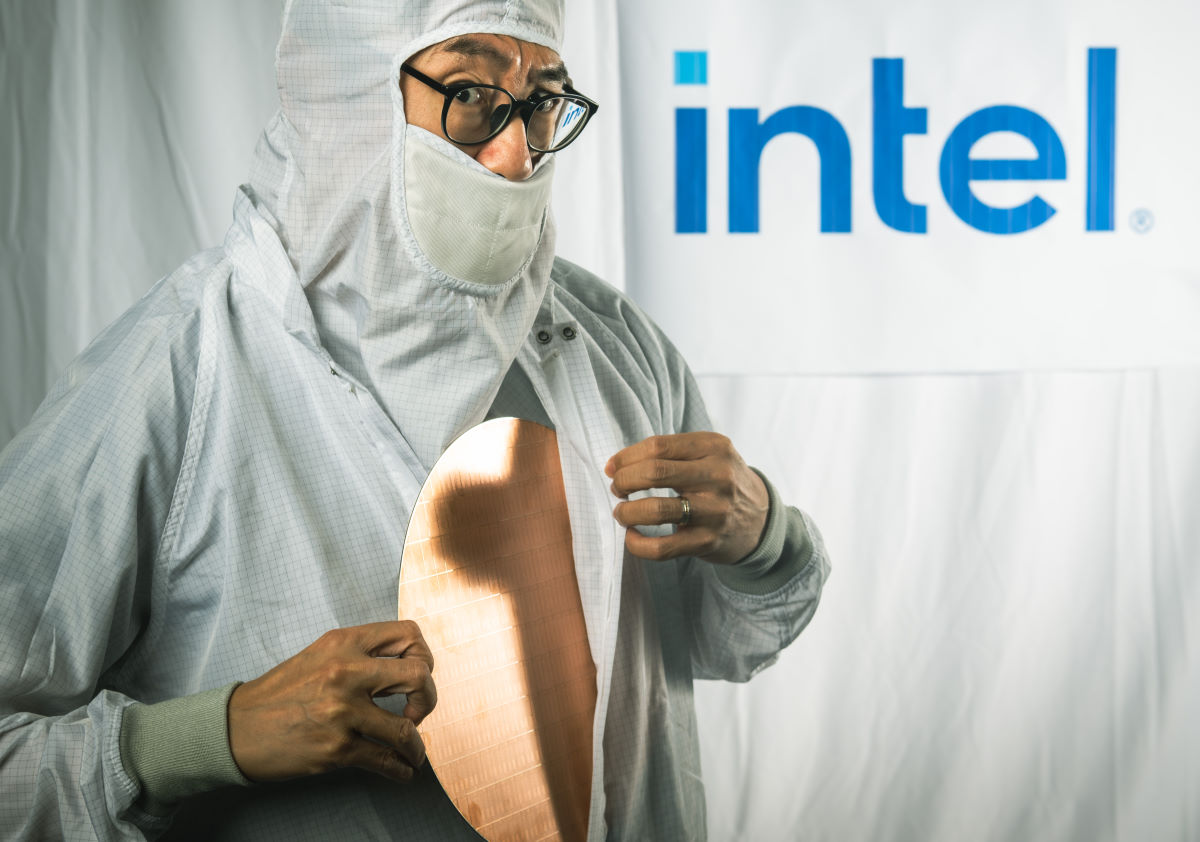 In the blue corner, Intel’s direct response to AMD’s Ryzen 7000 series is its own 13th Gen Core series of processors, codenamed Raptor Lake. However, unlike AMD’s brand new Zen 4 microarchitecture that’s now based on a 5nm process, Intel’s Raptor Lake is “merely” another refinement of their 10nm process node, also known as Intel 7, and the performance hybrid architecture that debuted with last generation’s Alder Lake chips. Raptor Lake has more of everything compared to Alder Lake - faster P-cores, more E-cores, more L2 and L3 cache, and faster DDR5 support. However, the underlying architecture and technology remains the same.

Now, I used air quotes for merely in the last paragraph because as easy as it is to write off Raptor Lake as Alder Lake+, Intel managed to squeeze so much gains from these tweaks that they claim Raptor Lake’s performance matches or even exceeds the expectations of a microarchitecture generation gap. 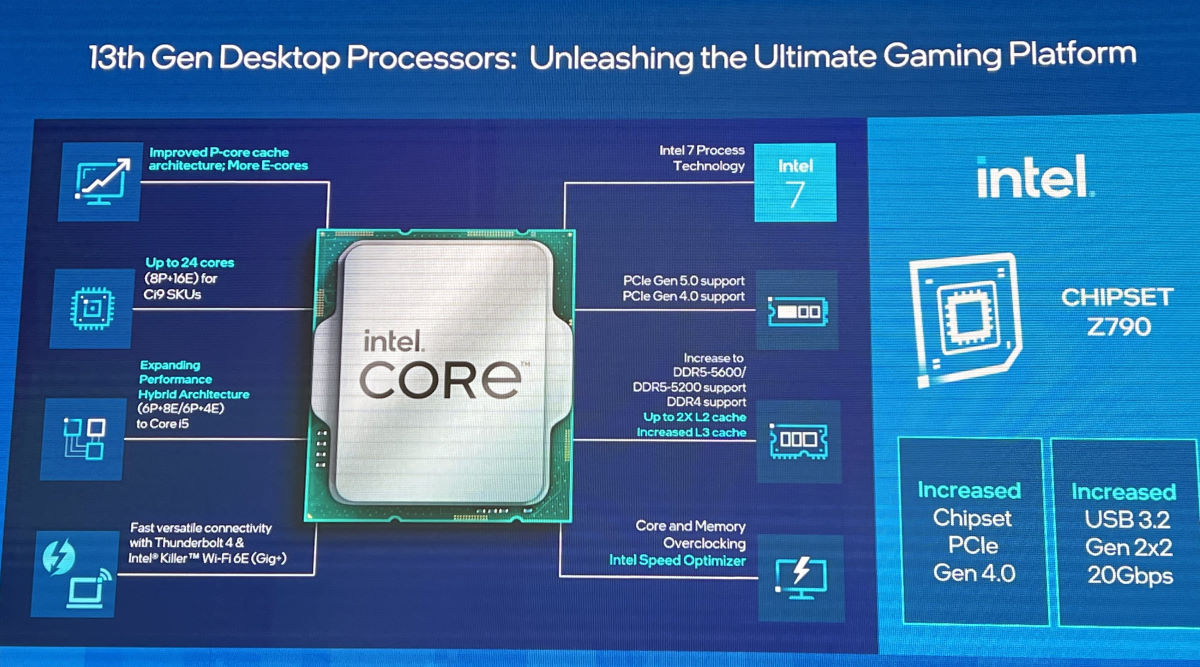 Let’s first take a look at the top level changes that will come to the desktop K-class CPUs before diving into some technical stuff. If there is any thing you take away from this article, it should be these points. Raptor Lake CPUs would feature: 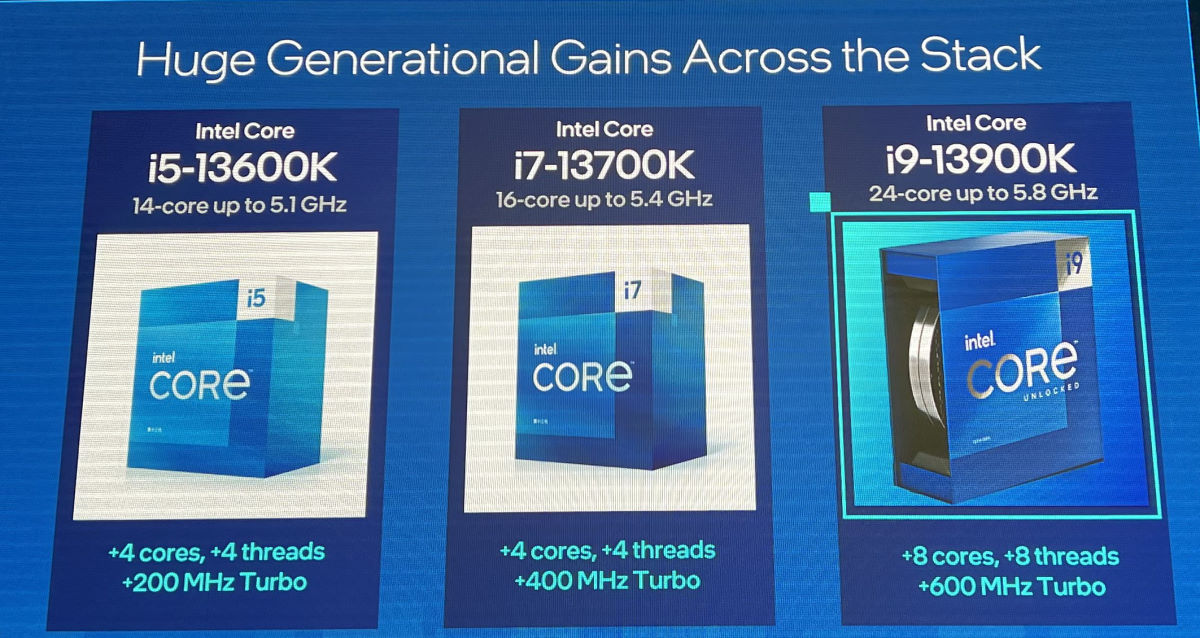 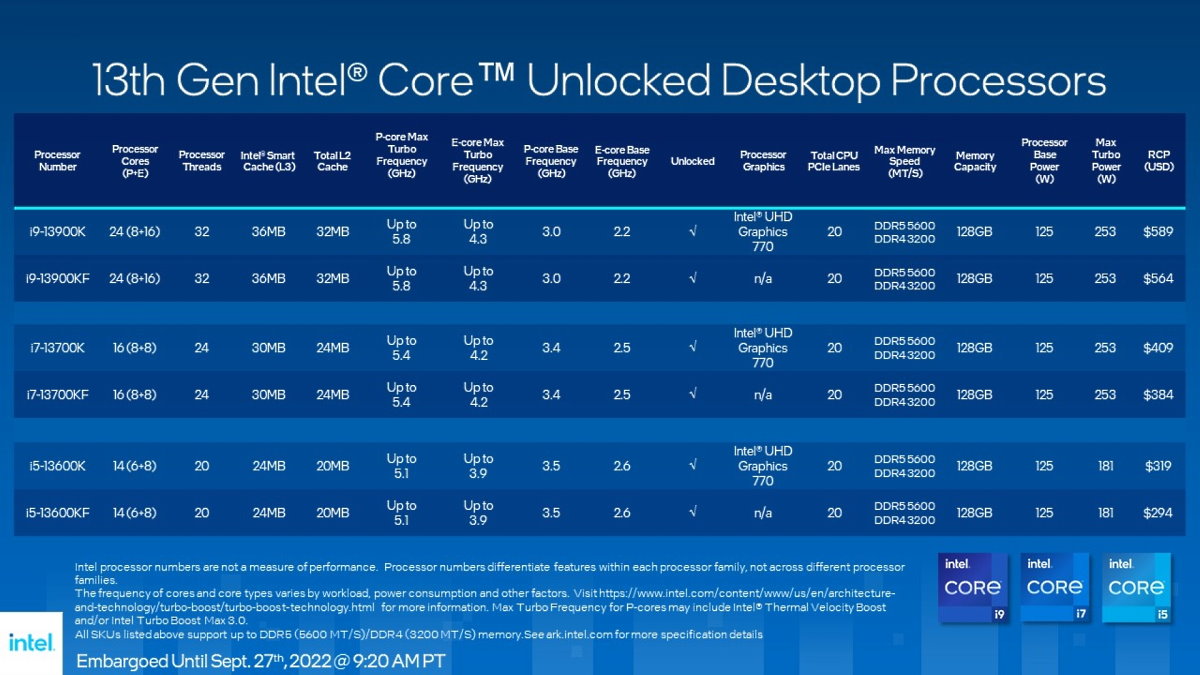 So, are there anything that’s actually new with the Raptor Lake cores? Yes. Raptor Lake’s P-cores are codenamed Raptor Cove, and are designed with what Intel is calling their 3rd generation SuperFIN transistors, improved speed paths and a new dynamic prefetcher algorithm. This allows the Raptor Cove P-cores to basically be more stable at scaling with voltage, unlocking up to 600MHz additional boost speed over the last generation. 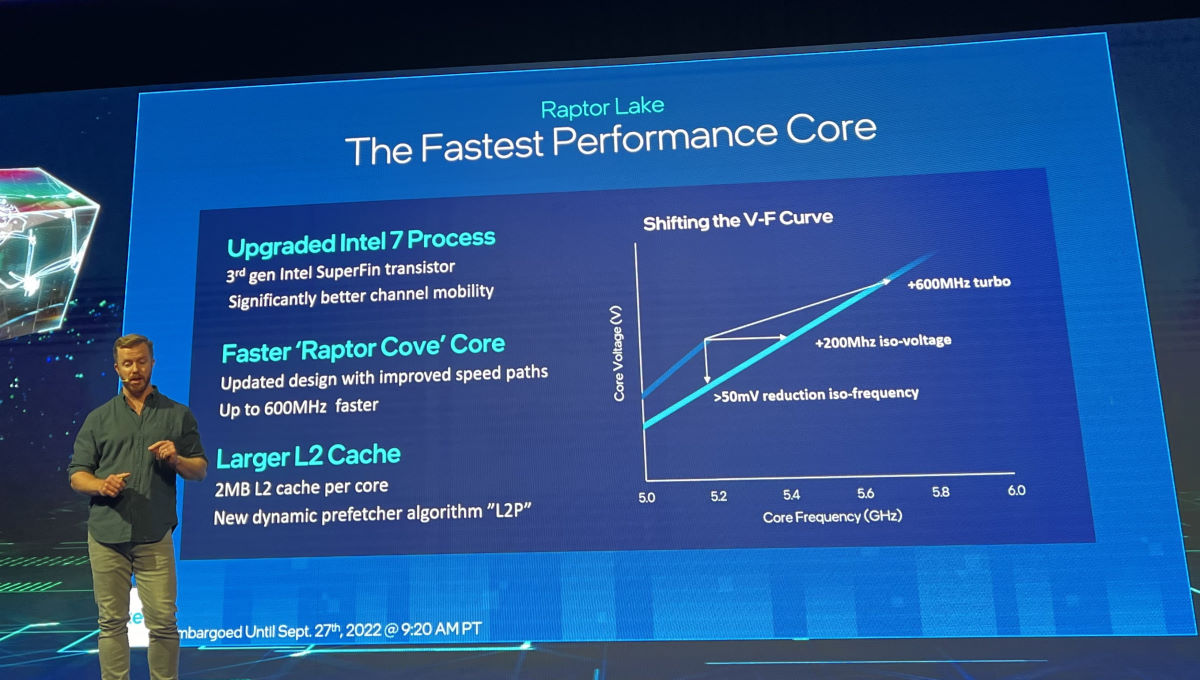 Similarly, the E-cores have gotten higher max boost speeds and smarter prefetcher algorithms as well. The i9-13900K E-cores have a max boost of 4.3GHz (over 3.9GHz on the i9-12900K). However, I do note that the base E-core frequencies are lower on the 13th Gen CPUs as their 12th Gen counterparts. For example, the i9-13900K has a 2.0GHz base compared to 2.2GHz on the i9-12900K. This could very well be a balancing feature due to the additional E-cores on these CPUs. 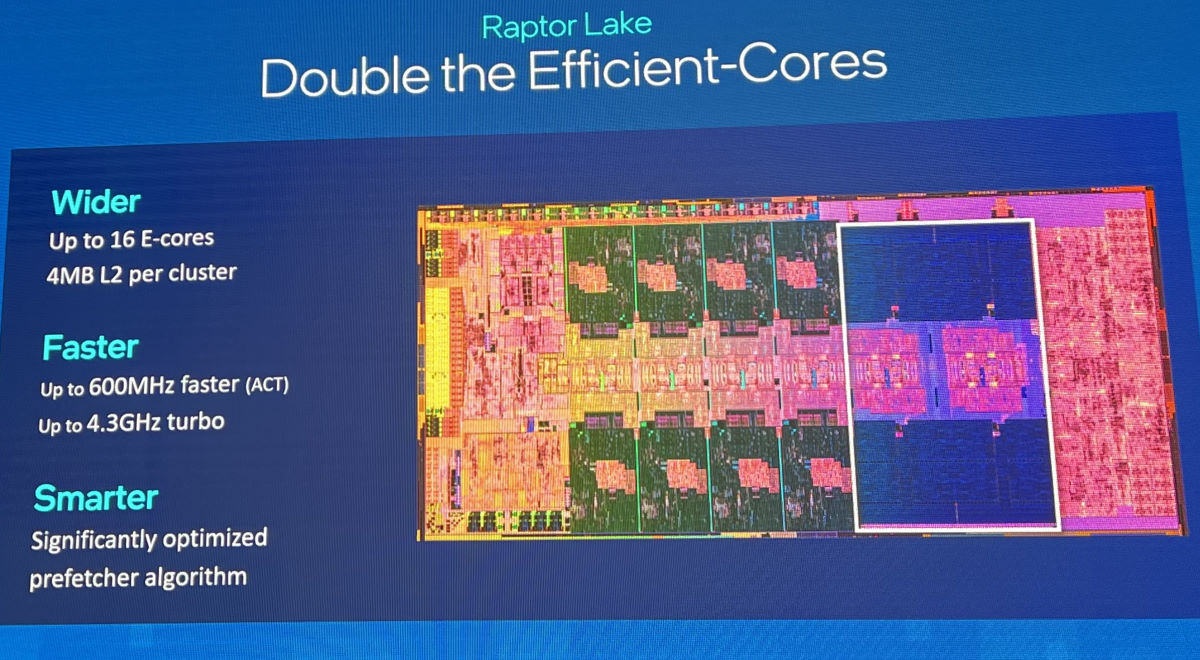 On the software side, Intel Thread Director has also been improved to better handle and route processes to the various cores, offering more performance or more efficiency when needed. This comes in addition to better multi-threaded support on Windows 11 as well.

Intel is also pushing Raptor Lake as a great overclocking platform, and to that, updated the Extreme Tuning Utility for both experienced overclockers with per-core OC, as well as a 1-button Speed Optimizer for those new to overclocking. 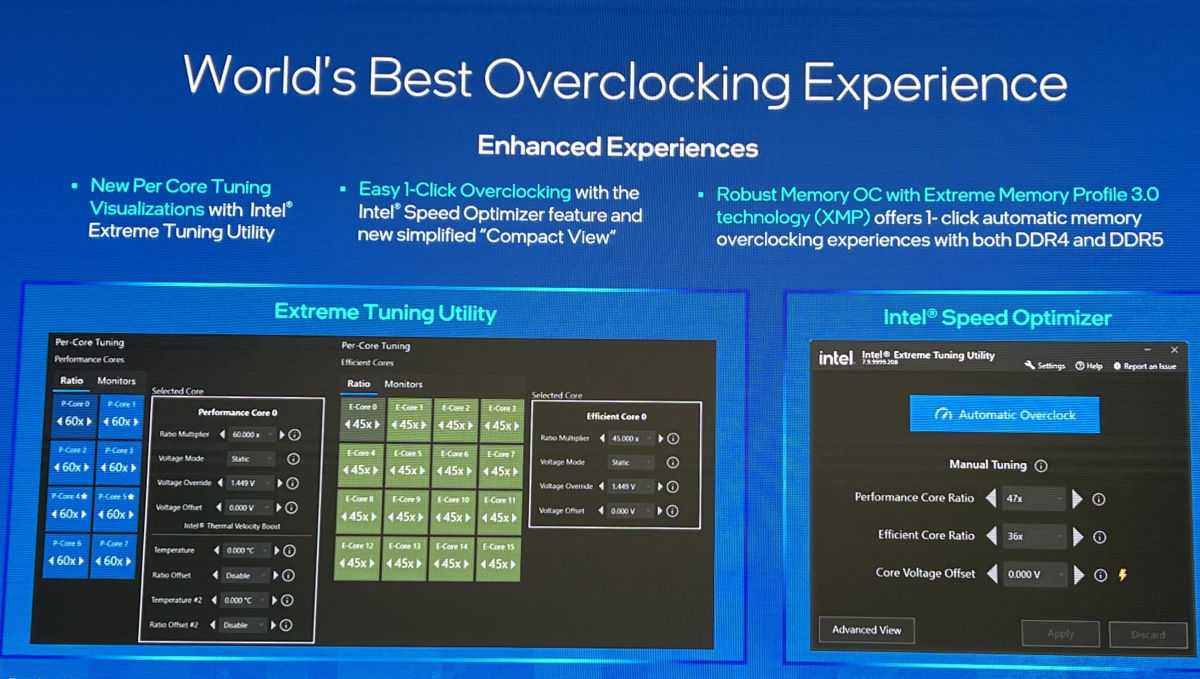 What can you actually expect in terms of performance?

Intel is claiming up to 15% single-threaded and a massive 41% multi-threaded performance gains for Raptor Lake. Expect up to 24% improvements in gaming and 34% improvement in creator workflow applications. 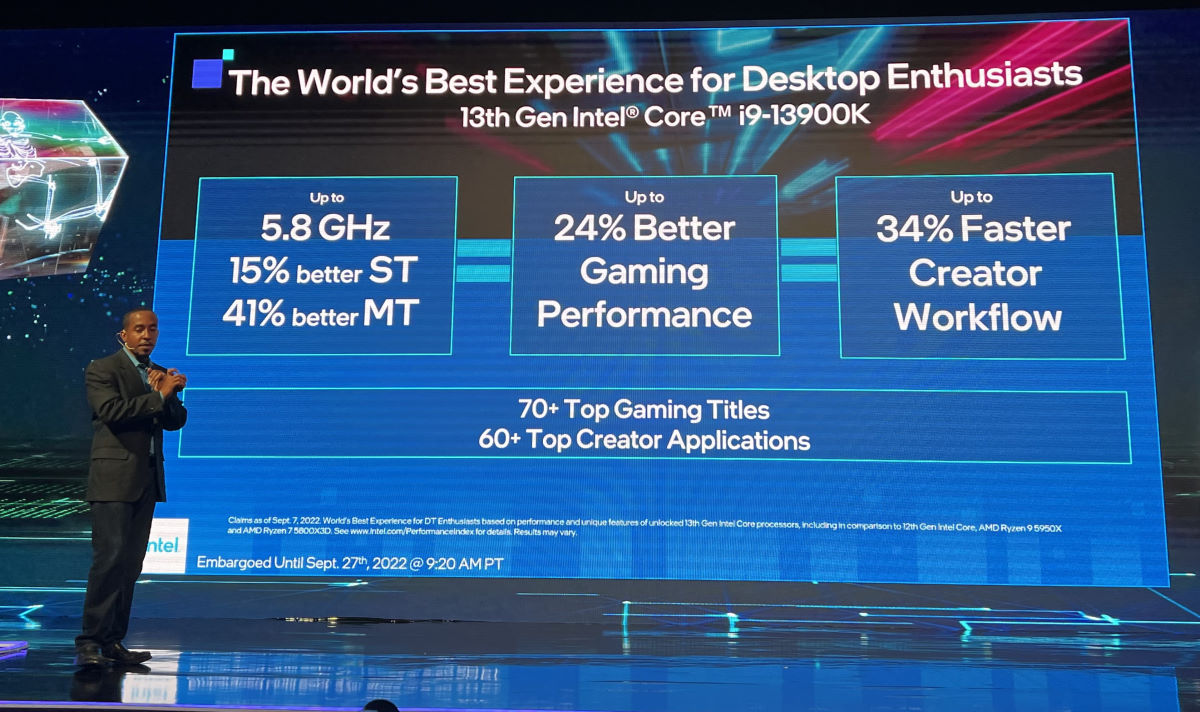 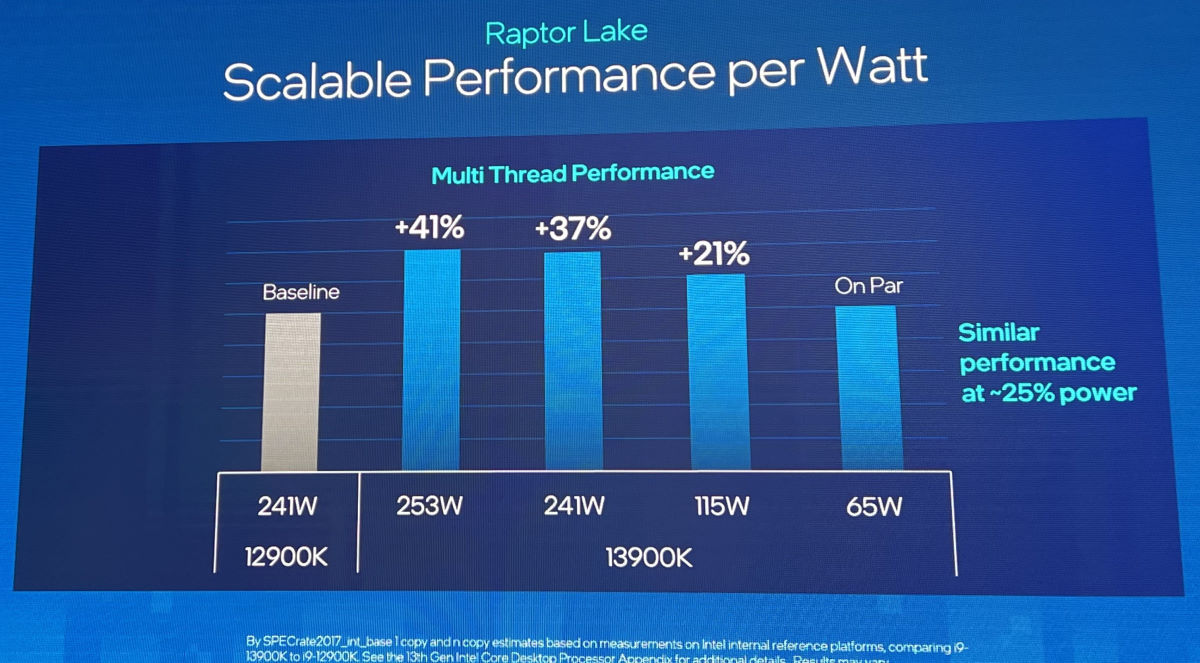 Like NVIDIA, Intel is starting to use 99th percentile numbers to prove that min-max fps rates aren’t the only thing that matter in performance benchmarking, and that a more consistently high (99%) fps rate will provide a clearer indication of performance and gaming experience across the board. 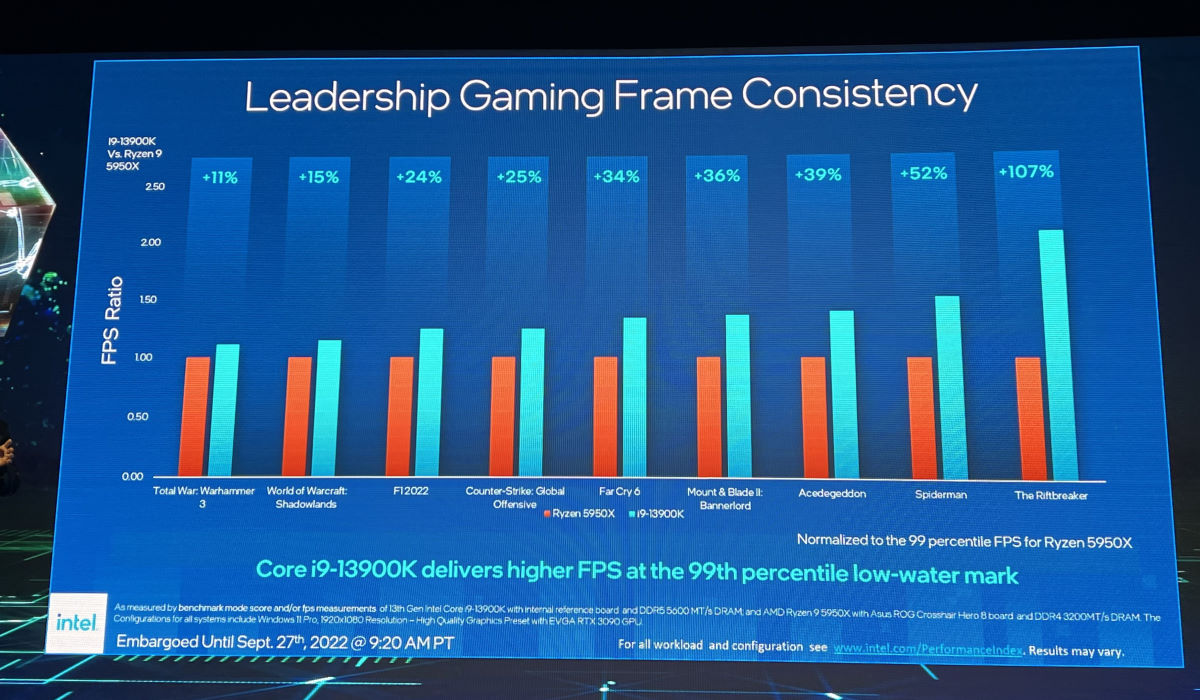 The most impressive demo that was shown to us was a 13th Gen Core  i9-13900K vs AMD Ryzen 5800X3D in a simultaneous gaming (Rift Breaker) and live-streaming workload, where the Intel machine proved to have higher fps and higher 99th percentile than the AMD-based system. At the end of the benchmark, the surprise reveal was that the i9-13900K was additionally rendering a 4K HDR video in the background, while the AMD system did not. 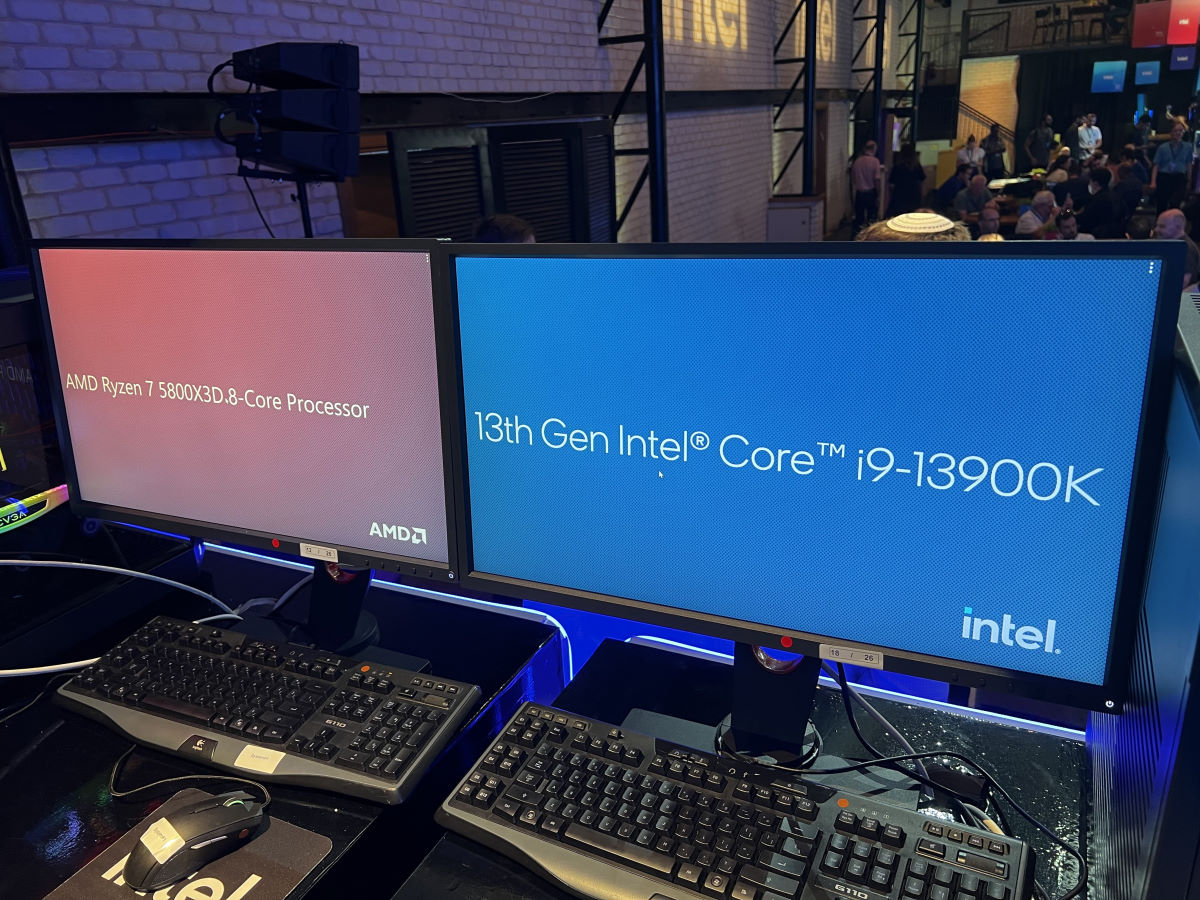 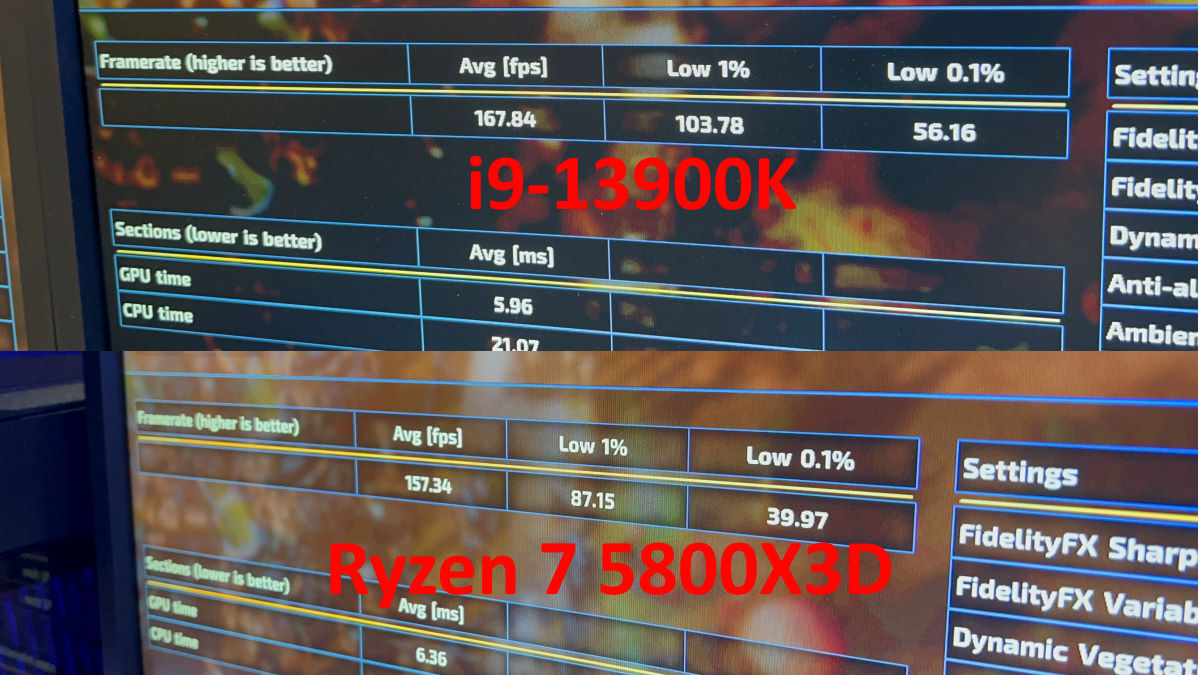 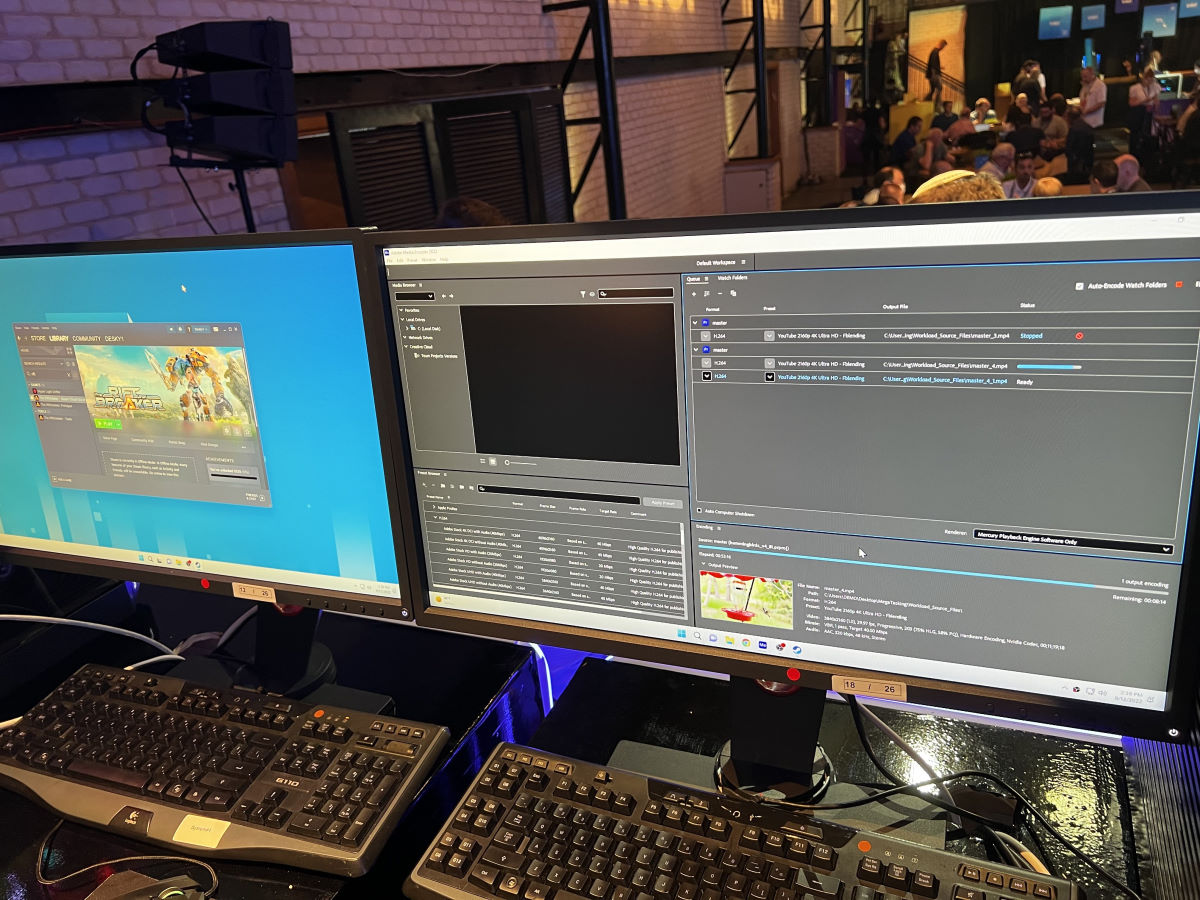 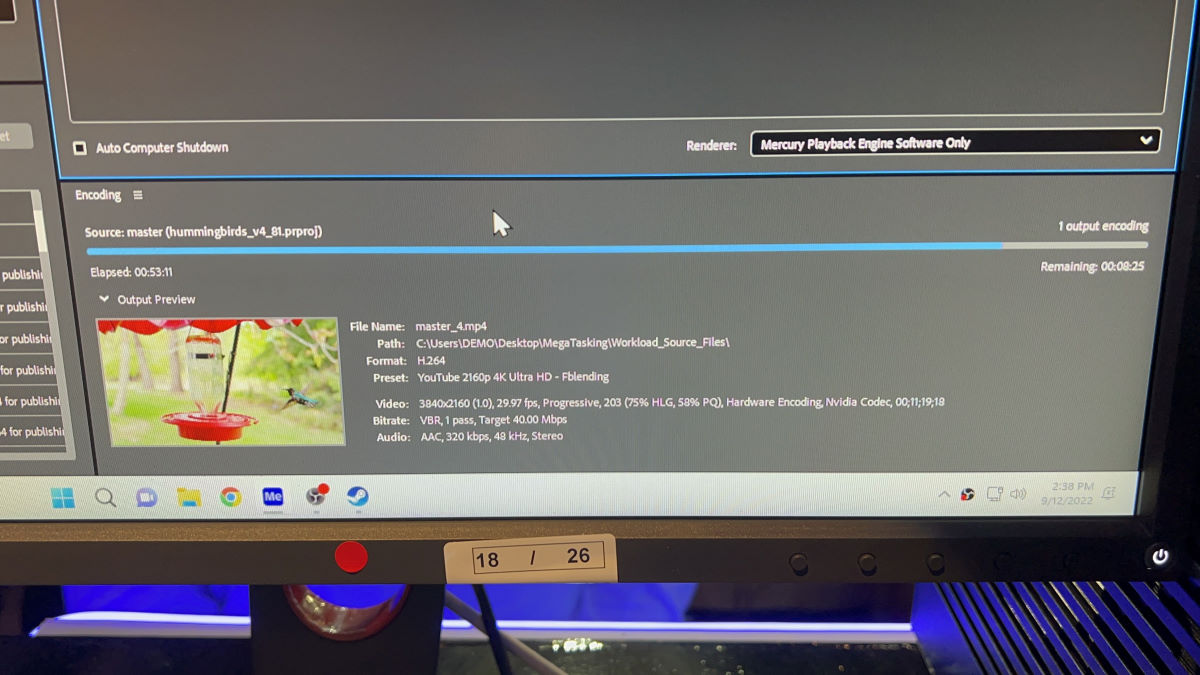 You could say Intel has had a good comeback run with Alder Lake that looks like it will continue with Raptor Lake. The benchmarks and scenarios played out to us in the charts and demos above look very promising, but of course, these are always one-sided and against the competition’s past-generation best. Until we get our hands on both Intel 13th Gen Core and AMD Ryzen 7000 processors for a head-to-head, we won’t know who’s got the upper hand as yet. 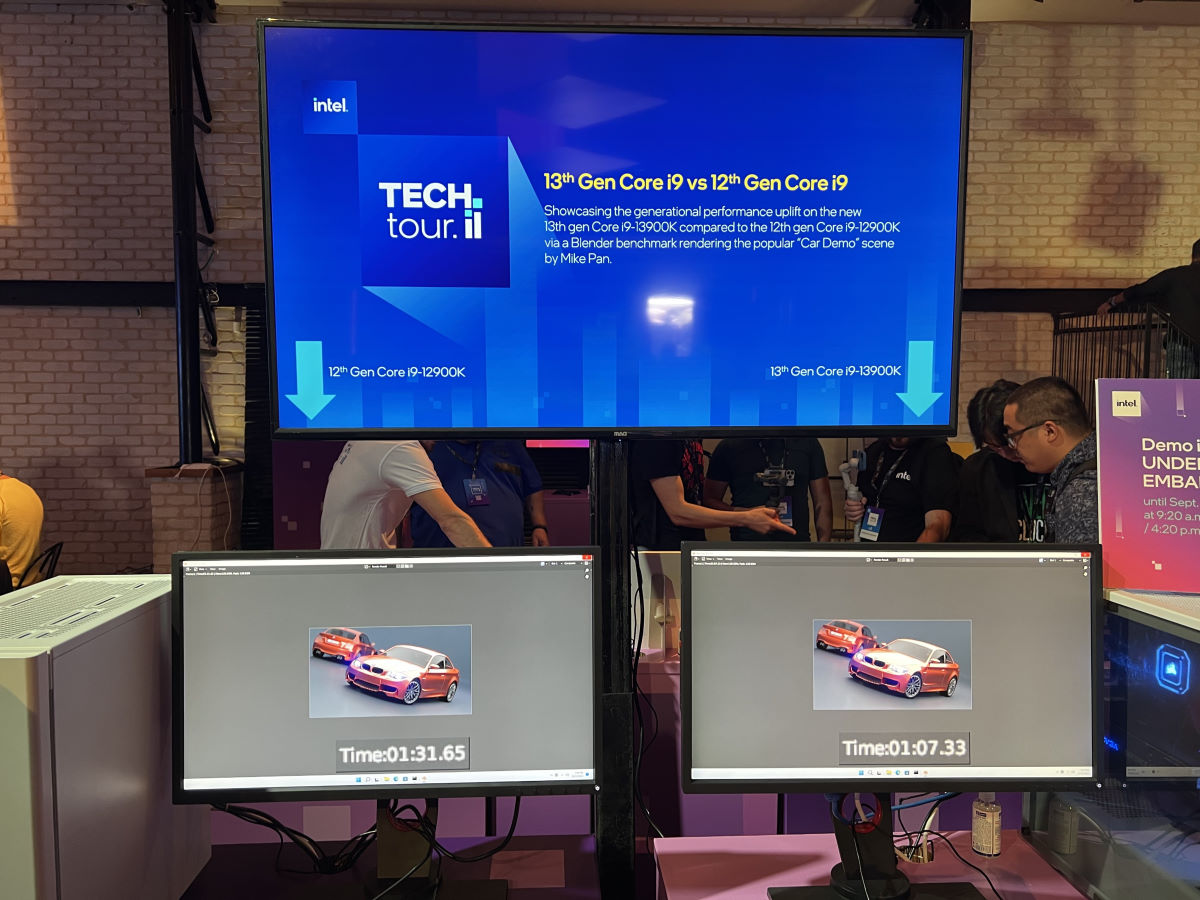 What’s new on the LGA platform?

There will be a new 700 series chipset that will be launched with Raptor Lake, but from everything we’ve been shown, Raptor Lake will continue to work with existing 600 series motherboards as well, so raw performance of the 13th Gen processors should not be impacted if you use existing Z690 motherboards. The only additional features of the 700 series chipset seem to be additional chipset-based PCIe Gen 4 lanes & USB 3.2 Gen 2×2 ports. 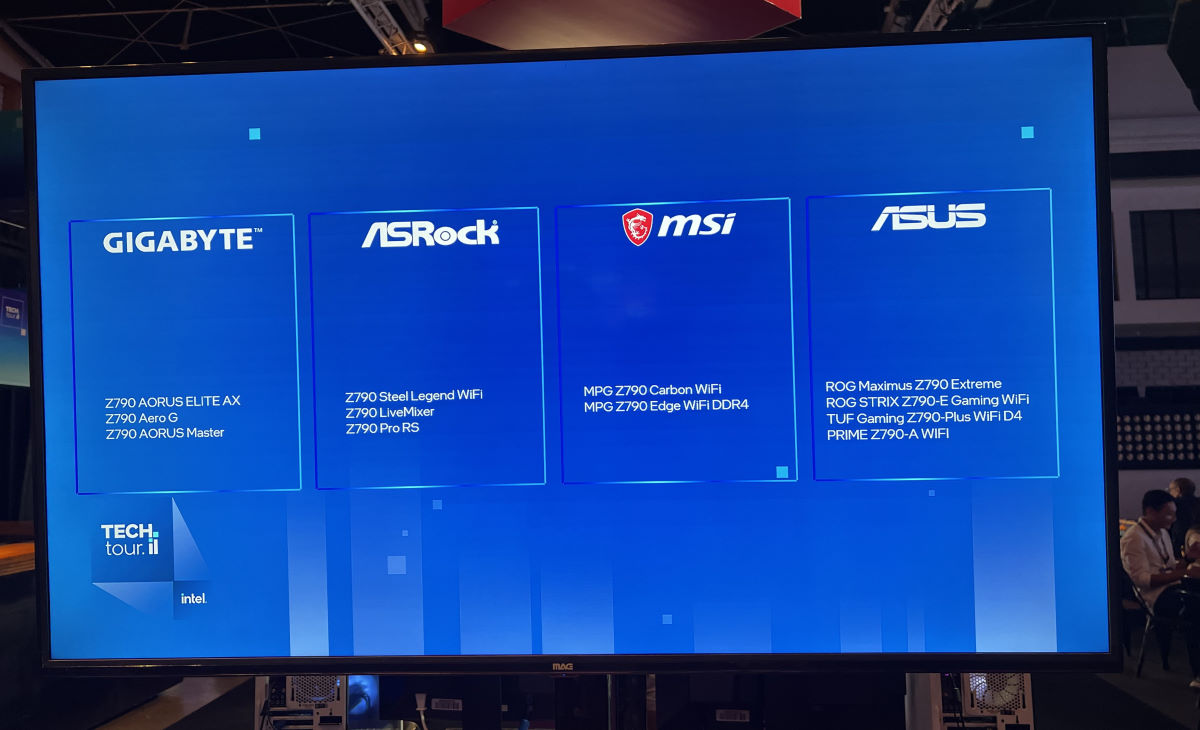 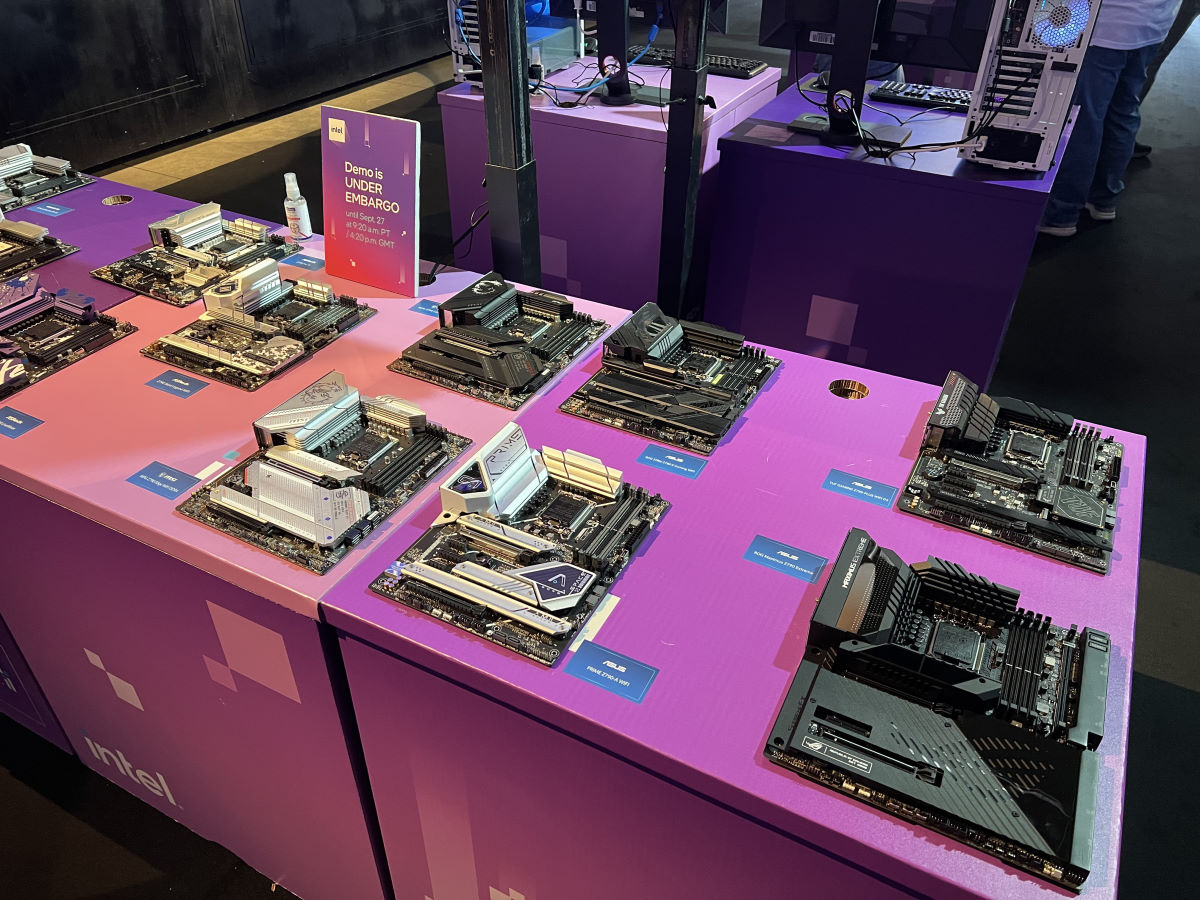 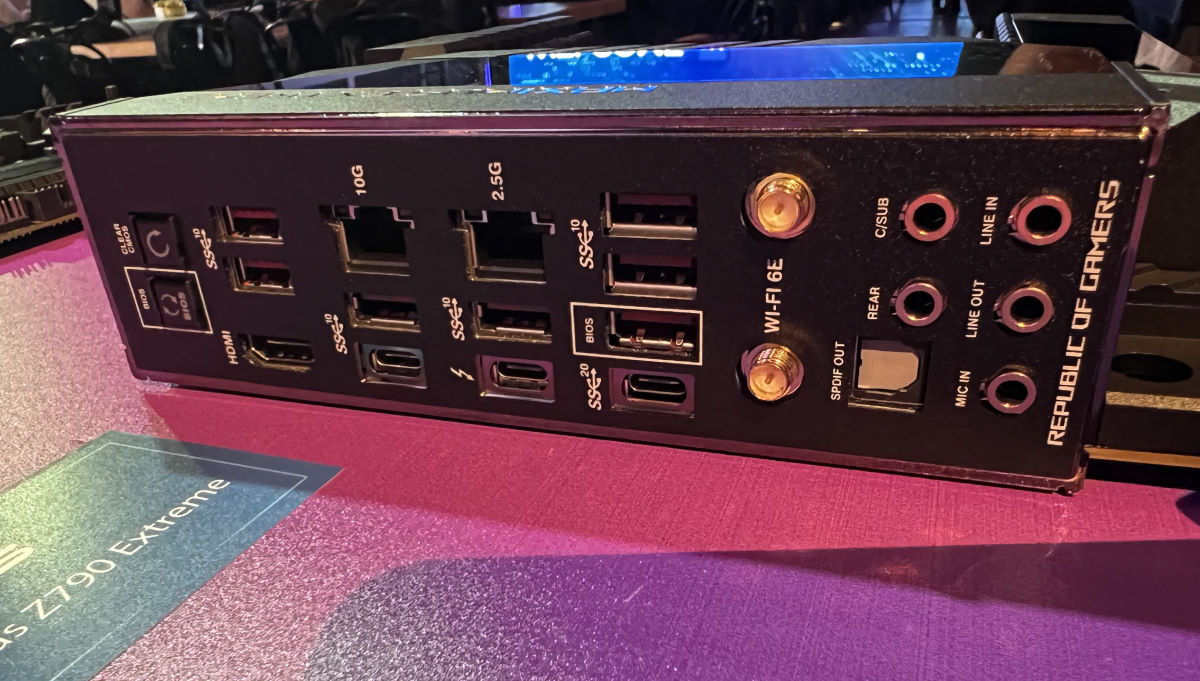 With Alder Lake and Raptor Lake bringing back Intel’s Mojo, they’re looking at breaking the last eight year’s cycle of stagnation with process node improvements. Intel was essentially “stuck” at 14nm from 2015 to 2018, and now they’ve been “stuck” again at 10nm for another four years since 2019. While Intel has shown that size doesn’t always matter at squeezing out meaningful performance improvements on an aging process, they’ve committed to deliver 5 node bumps in the next 4 years, moving from Intel 7 to Intel 4 (7nm) with full EUV Lithography for next year’s Meteor Lake, then Intel 3 by H2 2023, followed by Intel 20A (2nm) and brand new RibbonFET transistor technology in 2024 and Intel 18A in 2025. 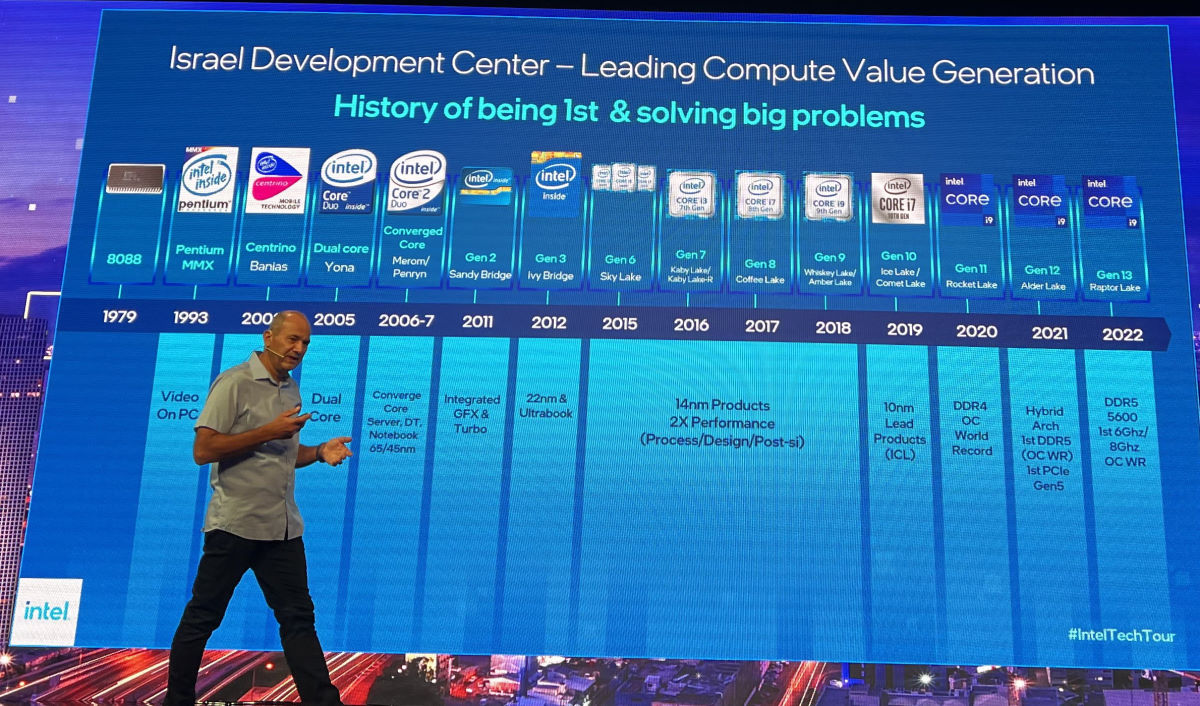 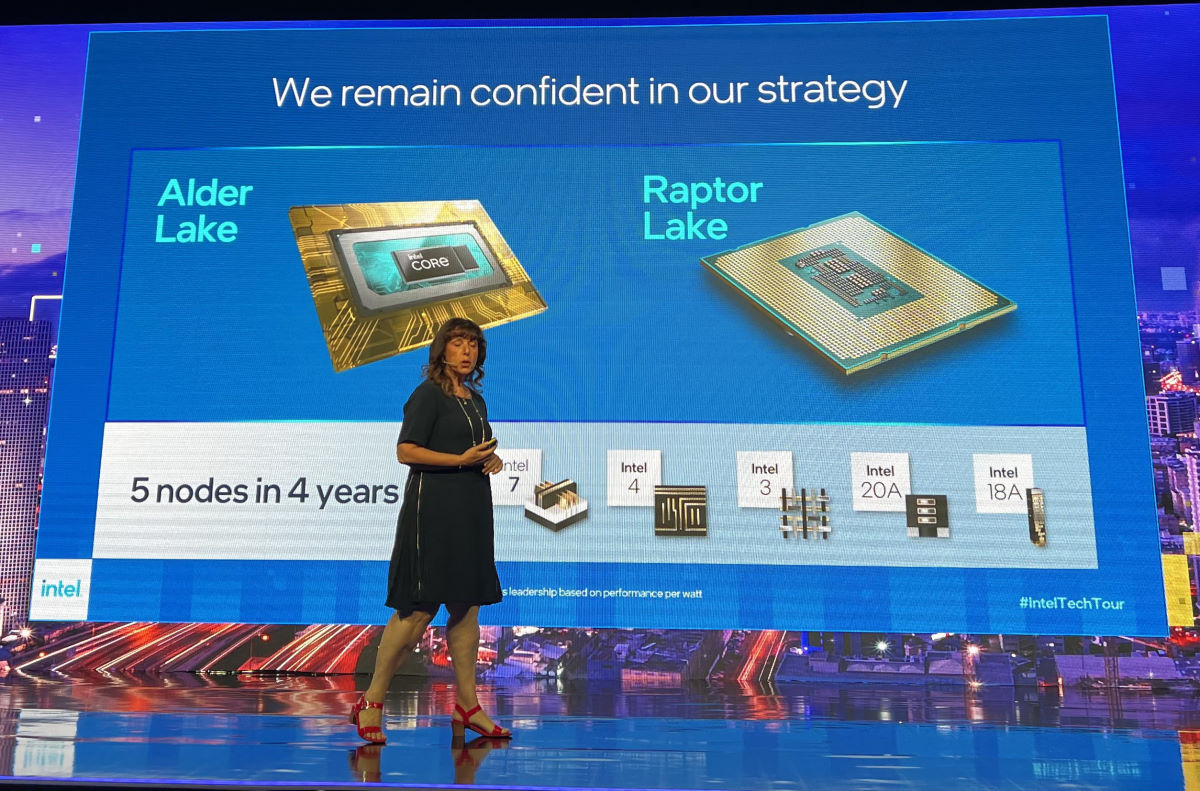