One on One: MSI vs. ASUS

One on One: MSI vs. ASUS

With the turn of the year, NVIDIA seems to be slowly but surely turning the tide of the battle. They might have been rudely shocked by ATI's impressive Radeon 4800 series, but the guys in green are back with a vengeance.

At this year's Consumer Electronics Show in Las Vegas, NVIDIA announced a slew of new products, the most significant being its new flagship card, the GeForce GTX 295. Alongside, they also announced the GeForce GTX 285, essentially a 55nm refresh of the GTX 280, but with higher clock speeds and lower power draw. The new GeForce GTX 285 comes clocked at 648MHz at core, 2484MHz DDR at the memory and 1476MHz at the shaders as opposed to the GTX 280's 602MHz, 2214MHz DDR and 1296MHz respectively. Also, NVIDIA reckons it'll draw about 20W less power compared to the older GTX 280. Although we said in our earlier review that we weren't too impressed with the GeForce GTX 285, it is still, undeniably and by a long stretch, the fastest GPU on the planet. 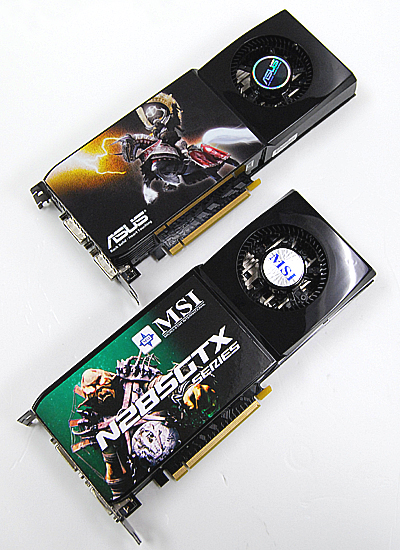 And while a single GeForce GTX 285 might not be as fast as the dual-GPU GeForce GTX 295 or Radeon HD 4870 X2, it does have its shining points. Most notably, its performance is not heavily dependent on driver updates. Being of a single GPU design, it'll work as it should right out of the box, saving users the hassle of worrying about issues like multi graphics cards scaling and driver optimization. Furthermore, its cheaper, consumes less power and if you have the dough and hardware to splash, a second GeForce GTX 285 can be easily added for extra oomph. Besides, it's not as if it was a slow card to begin with in the first place.

With that in mind, we have here with us some of the fastest GeForce GTX 285 cards currently in the market. These cards all come factory-overclocked as standard, and should therefore be insanely fast. Join us as we put them through our tests to find out which is best.