Falcon and the Winter Soldier: Episode 5 Easter eggs and everything you missed

Falcon and the Winter Soldier: Episode 5 Easter eggs and everything you missed 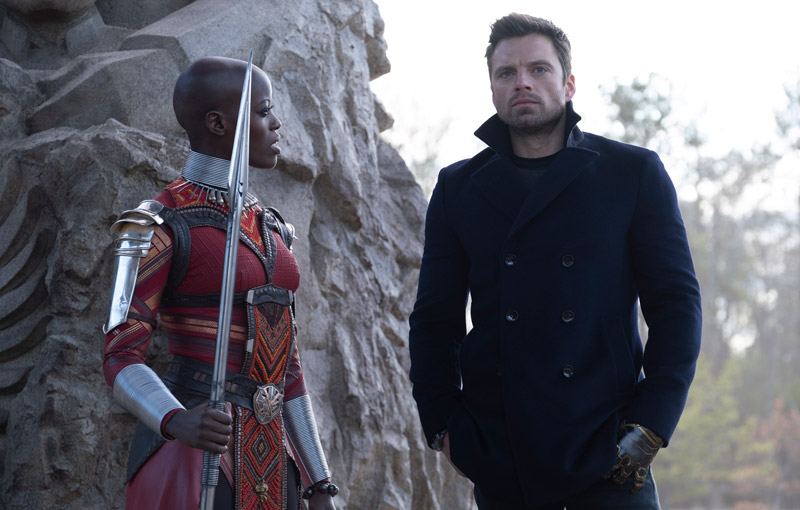 The Falcon and the Winter Soldier has flown by at a speedy pace for the last four weeks, following Sam and Bucky’s adventures across the globe as they chase down the Flag Smashers. In Episode 5 however, the series finally decided to slow down and give us a deeper look at its titular duo - and have them finally confront their misgivings towards each other. It also had our beloved and very murderous Captain America stripped of his title and shield…and there’s just no way that ends well.

As usual, Episode 5 was filled with lots of easter eggs and references to Marvel Comics and previous MCU entries. We took the liberty of compiling them all in one place, so read on!

Let’s talk about John Walker and that big cameo. After Captain America murders a Flag Smasher for killing his partner Lemar (which he didn’t even do, that was all Karli Morgenthau), he takes refuge in a conveniently empty warehouse and begins to lose his mind. Sam and Bucky quickly arrive and while Sam is more willing to talk Walker down, Bucky’s all riled up to introduce Walker's face to his metal fist. There’s a bit of a scrape, but Walker eventually loses the fight and his shield. In the aftermath, we see Sam grimly wiping blood off the shield - struggling to clean it. It’s clear he respects what it stands for, but has mixed feelings that it has once again ended up in his hands. More on that later!

John Walker killed someone when he was Captain America in the comics, too. Several people, in fact. A few members of an extremist group called Watchdogs killed his parents, so he went after a few of them - but the government did not immediately strip him of his title. They actually tried to cover the whole thing up, but that clearly wasn’t an option for this series. Walker was caught on camera and in this digital age, one can assume public outcry was a factor in his prompt firing. After all of this, he still blames the government for his actions, claiming that they ‘built’ him this way and led him down this path. He might not be wrong, but that won’t make him Captain America again.

You know who could make him Captain America again? Julia Louis-Dreyfus. That’s right, the star of Seinfeld and Veep casually dropped by for a cameo in Episode 5 to offer Walker a helping hand. She plays Contessa Valentine Allegra de Fontaine, whose name is so unnecessarily swanky that it can only be a comicbook creation - which it is. In the comics, Fontaine was a spy working for Nick Fury and SHIELD until it was revealed that SHIELD had been part of Hydra all along, and Fontaine had been a mole. She became Madame Hydra for a while too, succeeding the villain Viper for the role. You get the idea: Fontaine is not one of the good guys. 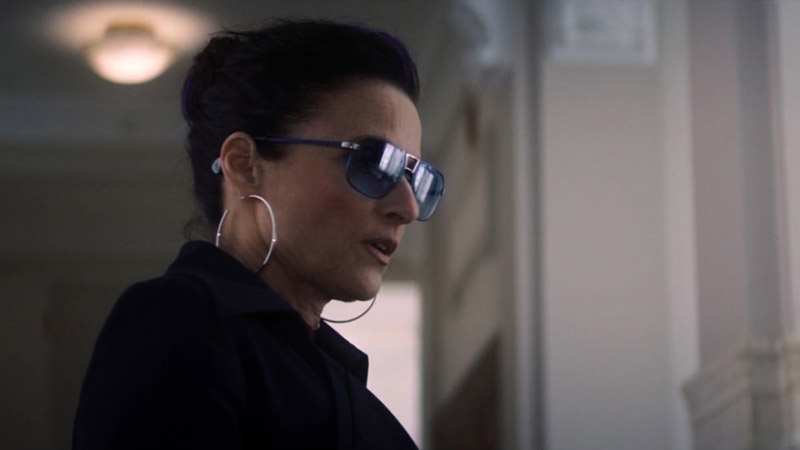 Here, Fontaine offers Walker a card and a job - though the disgraced ex-soldier later notes that the card was blank. Obviously, her role is going to expand beyond this small appearance in the future - but to what end? Well, given that Fontaine was meant to make her MCU debut in Black Widow, we have an educated guess. The Thunderbolts, as we explained in our Episode 3 recap, are a team of Marvel villains led by Baron Zemo. A common theme running through The Thunderbolts comics was that of redemption; how lowly villains can rise to do great things, but even if they do, would that excuse their past sins?

Comicbook villain and mercenary Taskmaster is set to make his debut in Black Widow too, and we could easily see Fontaine pull him into an early version of the Thunderbolts. Baron Zemo is ready and waiting in The Raft (that maximum security prison in the middle of the Atlantic ocean as seen in the Avengers: Civil War movie), though it might take some time before anyone sees him as a fit leader. John Walker is currently busy building a bargain bin version of the Captain America shield (hope you didn’t miss that end-credits scene!), but once he’s done, we could see him slide into the Thunderbolts too. Heck, we could even see Batroc being a suitable candidate for the team. 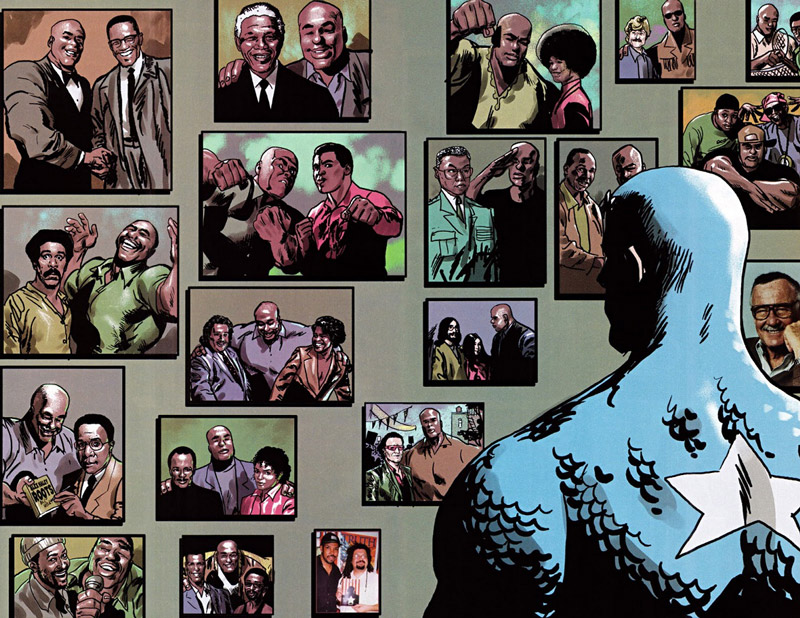 Episode 5’s title ‘Truth’ comes from the Marvel comic Truth: Red, White and Black written by Robert Morales with art by Kyle Baker. This comic series depicts, almost word-for-word, the horrifying events Isaiah Bradley went through as he relives them during a conversation with Sam. This was a make-or-break moment for Sam. He struggled with the very idea of becoming the next Captain America - and unlike John Walker, it wasn’t because he felt unworthy of the shield. Wearing the colours of the American flag can mean a lot of things to a lot of different people. To Isaiah Bradley, it was unthinkable.

Bradley explains that a handful of his peers had been, “shot up,” with an early version of the Super Soldier serum before being sent on war missions. They weren’t told of the serum’s properties, and most of them, “died off.” Once Bradley caught wind that his fellow soldiers had been captured as prisoners of war and higher-ups intended to bomb them all, he broke out of the facility that held him prisoner and saved his friends. He was punished for his efforts, and experimented on after it was discovered that the Super Soldier serum had worked on him. In Captain America: the First Avenger, we saw Steve Rogers run off without permission to save Bucky Barnes and other prisoners of war just like Bradley, but he wasn’t punished for it. The reason is obvious.

“They will never let a Black man be Captain America and even if they did, no self-respecting Black man would ever want to be,” Bradley says to Sam after recounting these events, which have plenty of real-life parallels in modern day America. Unethical human experiments were conducted on Bradley, and they are unfortunately based on reality. Take the Tuskegee Syphilis Experiment for example. 399 Black men suffering from syphilis were not told that they had syphilis, and instead of being given the ‘free healthcare’ they were promised in this experiment, were left untreated to monitor the effects of syphilis. In a better world, this experiment would have never taken place. In the one we live in, it went on for 40 years, even after penicillin was discovered to treat the disease.

Just because Bradley saved a bunch of people doesn’t mean he was exempt from the horrors of racism in his time. In his story, he mentions the ‘Red Tails’, a nickname for the Tuskegee Airmen who had to fight for their right to fly as the first African-American military pilots in the US Armed Forces during World War 2. Despite flying 15,000 missions, they were subject to racism during their service and after. Other African-American soldiers would return from service to massacres, racial riots and lynchings as civilians. The Marvel universe is a candy-coated version of the world we live in, sure, but its America clearly shares the same dark history. If Sam Wilson picks up the shield and decides to be Captain America, he isn't just inheriting Steve Rogers’ legacy. He would inherit America's legacy too, and that puts its many sins on his shoulders. His reluctance to do so is understandable, to say the least.

Who is the new Falcon? 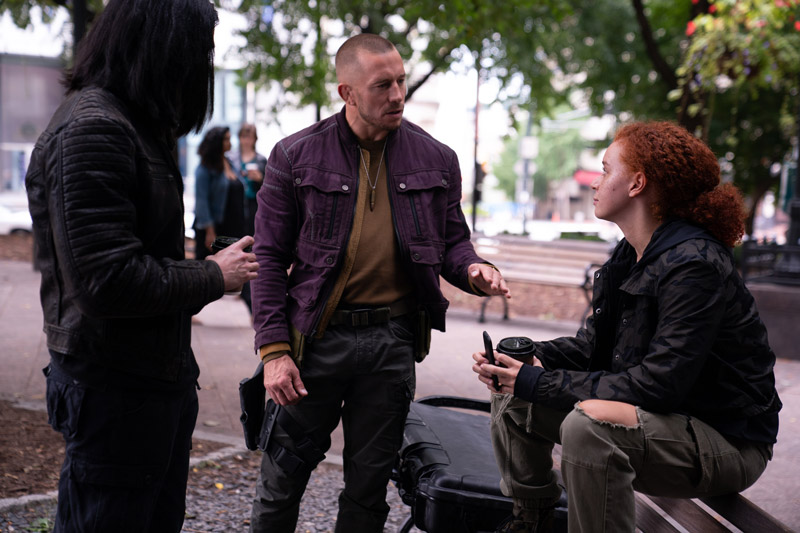 Sam Wilson leaves Joaquin Torres his broken Falcon wings, and that’s no accident on Marvel’s part. In the comics, Torres inherits the Falcon mantle after Sam Wilson becomes Captain America. He was also a bizarre half-human, half-falcon, half-vampire hybrid after being experimented on by Karl Malus (who made an appearance in Netflix’s Jessica Jones). Comics are weird, so we expect the MCU to leave out this particular segment of Torres’ history and make him a simpler, militaristic successor to Falcon.

After Bucky drops Zemo off with the Dora Milaje, he asks one last favour of Ayo: to craft a new suit (and possibly wings) for Sam to wear. At this point, he was rather intent on Sam becoming Captain America, so it’s a good bet that this suit comes emblazoned with the traditional blue-and-white stars and stripes. We get just a tease of it before next episode, but if you’d like to see how the next Captain America looks in the comics, see below: 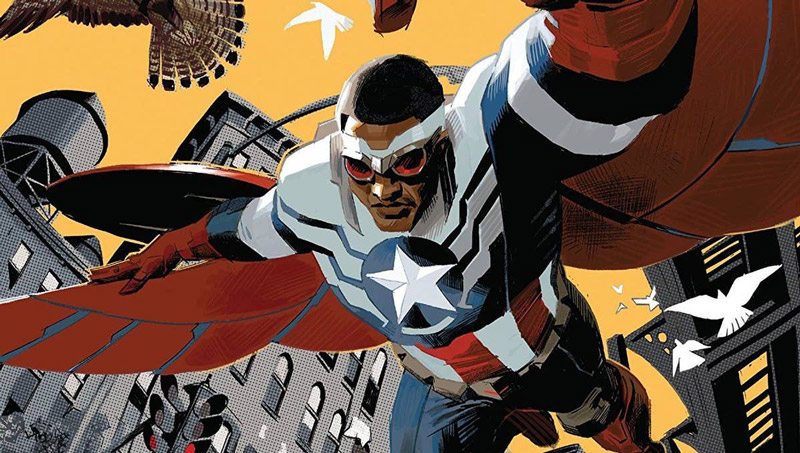 Lastly, where is Steve Rogers? The Falcon and the Winter Soldier has played coy about the fate of the last Captain America, but Sam and Bucky both confirm that he’s ‘gone’ in this episode. This either means that he’s passed away from old age or returned to his original timeline after passing the shield back to Sam in Avengers: Endgame. All signs point to Steve being dead unfortunately, since the speech Sam gives in Episode 1 sounded a lot like an eulogy. Given that rumours of Chris Evans returning to the MCU were kicked up just a few months ago, we could also see a last-minute cameo. All this talk of him being ‘gone’ could just be a red herring, setting him up for a surprise appearance in this week’s grand finale. Alas, this sounds more like a distant dream than anything else. 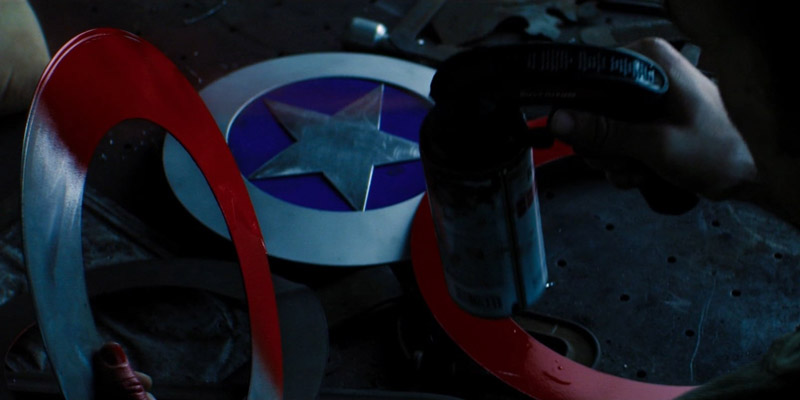 Next week’s big Falcon and the Winter Soldier finale is shaping up to be something great. Sharon Carter has hired Batroc for reasons unknown - though that might not reflect too badly on her morals. Nick Fury did the same in Captain America: The Winter Soldier, after all. John Walker is building a new shield from scratch, presumably to finish his mission and crush the Flag Smashers. Karli Morgenthau is planning on attacking a GRC conference to make a statement, and she has a ton of new followers backing her revolution up.

Most importantly, Sam and Bucky have temporarily parted ways, but on much better terms than when the series began. The duo spent a lot of time with Sam’s family, learning about each other and understanding one another’s troubles. Bucky considers Steve’s shield to be, “the closest thing I’ve got to a family”, but now understands Sam’s predicament better. Likewise, Sam now knows that Bucky has been struggling to make amends and mentally recover from his time spent killing for Hydra. The Falcon and the Winter Soldier have a lot of work left to do, but they’re finally set to do it as real partners now.