Review: Mortal Kombat has lots of fan service to offer but not much else
Feature Articles

Falcon and the Winter Soldier: Episode 3 Easter eggs and everything you missed

Falcon and the Winter Soldier: Episode 3 Easter eggs and everything you missed 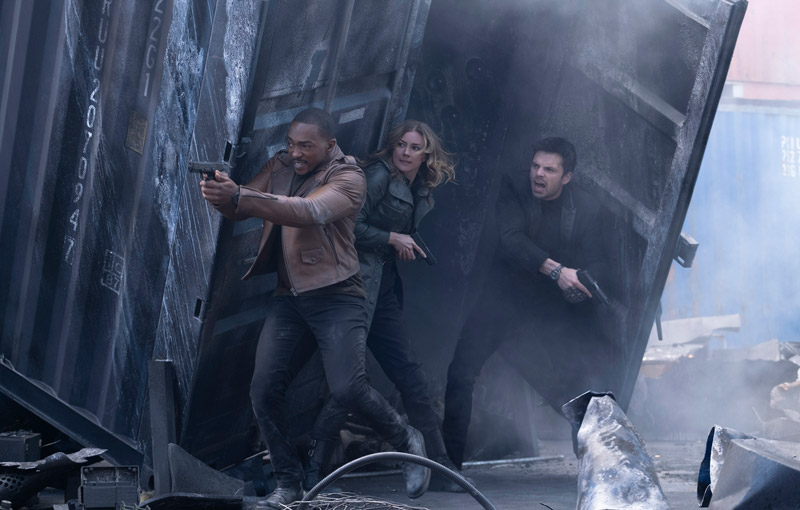 Each episode of The Falcon and the Winter Soldier has been more eventful than the last, and this week’s installment was no exception. Episode 3, titled ‘Power Broker’, gave us uneasy alliances, action-packed drama and a cameo none of us saw coming. It was also an episode brimming with comicbook easter eggs and references, pulling somewhat obscure characters and locations into Sam and Bucky’s globetrotting adventures. Often, violently.

But hey, that’s what happens when you team up with Baron Zemo.

Sam and Bucky were left in the sticky position of having zero clues on how to stop the Flag Smashers, which left them with one horrible option: Talk to their good old buddy, Helmut Zemo. Zemo previously showed up in Captain America: Civil War as an angry man with a dead family from Sokovia, driven by one goal - destroy the Avengers. To do this, he investigated Hydra’s sordid history and its ties to the Winter Soldier, Bucky Barnes.

Because of this little Hydra connection, Bucky thought Zemo might help them destroy the Flag Smashers - a band of Super Soldiers running around trying to start a dangerous revolution. As such, he helped the baddie break out of prison. Zemo then joined the duo on a trip across the world to investigate the Flag Smashers and their mysterious new Super Soldier serum, much to the reluctance of everyone involved but Zemo himself. The guy’s having the time of his life. In Civil War, Zemo appeared to be an incredibly intelligent but otherwise average man who had lost his entire family. This is far from the way his comicbook counterpart is portrayed, but the two have inched closer in similarity after this episode. We see him don the iconic purple mask, which he put on after falling into a vat of boiling Adhesive X in the comics. It's because of this strange chemical that his face resembles molten wax - hence the mask.

In the comics, he’s incredibly gifted at hand-to-hand combat (especially with a sword) and is most often referred to as ‘Baron Zemo’. Episode 3 gave us a little of both. When Falcon asks Zemo incredulously if he’s been secretly rich this whole time after boarding a plane, the latter explains that he’s a Baron and member of Sokovian royalty. That explains his rather regal disposition, and seemingly high level of education. Later when the whole team is taking on bounty hunters, Zemo also proves to be remarkably adept at hand-to-hand combat - which is a big departure from how he seemed in Civil War. All that’s left now is the sword and full purple getup. Mark my words, we’re getting both by the end of Season One!

“You guys talk about it like it’s Skull Island.”

Madripoor has entered the MCU! This fictional location is vaguely meant to resemble a Southeast Asian country like Singapore or Malaysia in the comics. However, we didn’t see too many Asians in this episode, which is a little odd considering that Bucky confirms it’s, “an island nation in the Indonesian archipelago.” Ah, well. In the comics, Madripoor has had a rich, long-running history with strong ties to the X-Men. That history gets weird. Trust me, you don’t know where I’m going with this.

The X-Men have spent a lot of time in Madripoor, going so far as to set up base there for awhile. There’s a reason for that - the place is conveniently located outside the reach of international laws, and is generally cool with mutants. Tragically, the latter can often be a problem for them elsewhere. Out of all of the X-Men, Wolverine's the one with a lot of love for Madripoor. He has acted as the nation’s protector more often than not, and even met Captain America there for the first time! The Princess Bar is one of Logan’s favourite local hotspots to visit in Madripoor, and wouldn’t you know it? It made an appearance in this episode too.

The island nation is also of great interest to the Hand - an evil organisation frequently seen going against Daredevil or Iron Fist. Remember when I warned you that it gets weird? Well, the Hand wants to take over Madripoor for good reason; there’s a massive thunder lizard underneath it. This kaiju is the size of Japan, and the Hand wanted to resurrect and use it to conquer other countries, so…there’s that.

We doubt that the kaiju will make an appearance in this series, but it’s an interesting little footnote in Madripoor’s comic history. When they visit the island, Sam also takes on the moniker of one Conrad Mack, AKA Smiling Tiger - an actual Marvel villain who used to be a member of the Thunderbolts. The Thunderbolts were a team of villains led by Baron Zemo in the comics. At one point, even The Winter Soldier led them.

In the comics, the Power Broker is exactly what they sound like: a person who gives other people powers in exchange for monetary gain. The title has been given to various mysterious individuals in the comics, but their identity isn’t quite as interesting as their achievements. They’ve artificially created a bunch of superheroes, one of whom is of particular interest to us: John Walker, AKA Captain America the second.

After Walker received powers resembling that of a Super Soldier, he donned the moniker of ‘Super-Patriot’. He then staged fights between himself and Battlestar (among others) in an effort to curry favour from the public, while criticising the very idea of Captain America, which he saw to be outdated. After some time, Walker would become Captain America and then US Agent - in that order. The MCU seems to be taking him in a different direction, but after his enraged, “Do you know who I am?” moment in Episode 3, it’s clear that the guy has a short fuse. When Sam and Bucky meet the new Super Soldier serum’s creator, they learn that his name is Dr. Wilfred Nagel. The Power Broker hired this ex-Hydra scientist to complete the serum, which he did quite successfully. Nagel produced twenty doses, all of which were stolen by Karli Morgenthau and her Flag Smashers. This is another nod to the comics, in which Nagel was tasked with recreating the Super Soldier serum. This effort led to the creation of the veteran Super Soldier Isaiah Bradley, whom we met in Episode 2.

Sharon Carter also popped up in this episode, and it looks like the government hasn’t taken kindly to her involvement in Captain America: Civil War. Now living as a fugitive in Madripoor’s crime-ridden Lowtown, Carter has become rather spiteful of Steve Rogers and his friends. For good reason, too - she helped them, and they did nothing to help her for years. There are theories being kicked around that Carter is secretly the Power Broker, considering that she was the only one who actively avoided meeting Nagel in his lab. She also met with an accomplice after the shootout that followed, telling her that, “We’ve got a problem.” Clearly, there’s more to her than meets the eye. Lastly, we have an unexpected Black Panther tie-in! After the group arrives in Latvia to look for Morgenthau, Bucky traces a series of Kimoyo beads back to their source: Ayo, a member of Wakanda’s Dora Milaje. We first saw her in Captain America: Civil War, where she travelled with the Black Panther, T’Challa and his father T’Chaka. Bucky doesn’t seem too surprised to see her, but she demands Baron Zemo and the episode cruelly ends.

Bucky’s very familiar with Wakanda at this point. The nation took him in and rehabilitated him after the events of Civil War, and we even saw him interact with T’Challa’s sister Shuri in a Black Panther post-credits scene. Knowing that, it would make sense for Bucky to be familiar with the Black Panther and members of the Dora Milaje - including Ayo. The reason Ayo’s here in the first place is obvious: Baron Zemo killed T’Chaka, former king of Wakanda, and the nation wants justice for his death.

How that’s going to play out over the next episode remains to be seen. Sam and Bucky need Zemo to get to the Flag Smashers, but Ayo has good reason to want him behind bars too. Either way, things aren’t looking good for Zemo.