It’s been just about three months since we reviewed FiiO’s pocket-sized High Resolution Audio (HRA) player the FiiO X1, and now they’re back with yet another quality product – the Fiio X3 II, a similarly pocketable HRA player that has a larger battery and an improved metal finish but slightly more weight and girth. Unlike the X1, you don’t get a choice of colors with the X3 II. The X3 II only comes in titanium (the color, not the material), but we think it gives the player a classy look overall, and the fine-grain finish on the faceplate is a nice touch that keeps the player looking fresh.

The button layout is largely unchanged from the X1, with the power button and the volume control buttons on the left of the player. The software interface is also largely unchanged, with main control options remaining as: Now Playing, Category, Browse Files, Play settings, and System settings. The X3 II does however, give you a choice of six themes for changing the look of the user interface so you can slightly personalize your player. As with the X1, the X3 II doesn’t have any internal storage, but supports up to 128GB microSD cards. You still get the same 2-inch 320x240 pixel TFT screen, but the X3 II is also able to act as a USB DAC for your computer, so you get an audio upgrade for that too. That’s all in a package that measures just 96.7x57.7x16.1mm and weighs 135g. The X3 II has a battery life of more than 11 hours, and completes charging in under three, but it charges via USB so using it as a DAC for your laptop won’t drain it. 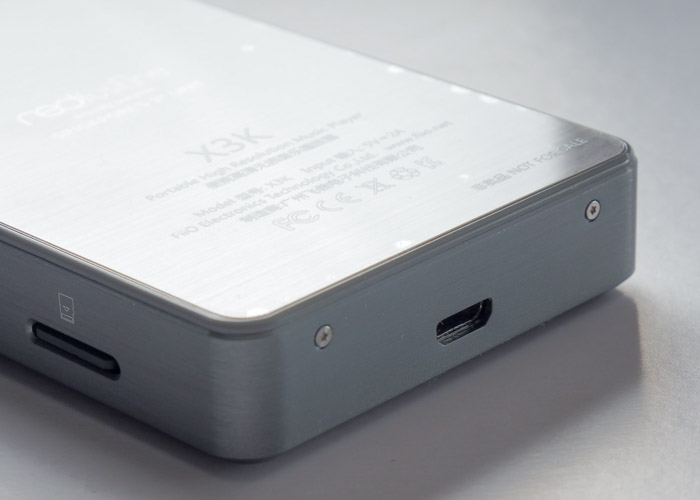 Navigation is again via the scroll wheel in the center and works much the way it used to on the original iPod, that’s to say, pretty intuitively. Turn the wheel in either direction and the menu item in the respective direction will be highlighted, then press any of the other buttons to engage. As with the X1, there’s quite a low level of complexity involved as the player is meant to do one thing only – play music.

One major feature that FiiO is keen to point out is that theX3 II's CS4398 DAC will support native DSD playback without any conversion to PCM. The X3 II also features dual crystal oscillators dedicated to multiples of 44.1kHz and 48kHz respectively, ensuring lower jitter and great precision at all sample rates. FiiO has also provided a complete set of ports on the X3 II for connecting to external DACs with a standard audio jack and Coaxial/Line out on the top of the player. A microUSB 2.0 port can be found on the base for charging, data transfer and docking, so you could say the X3 II is designed to work well with others. Like the X1 before it, the X3 II fits in our hands quite comfortably, and the scroll wheel interface remains simple to use. We didn’t have an X1 on-hand to do a side-by-side comparison, but overall the buttons remain easy to use and the system is quite responsive overall.

We started with Santana’s Black Magic Woman in DSD format, and thought the X3 II did a really good job with the track. While the bass was a little less impactful than we expected, the overall rendering of the track was indeed smooth with lots of detail. Moving on to a high resolution recording of Fireopal by Ottmar Liebert, we were again impressed by the amount of depth and detail we heard.

This time round, the bass notes were full, and resonant, bringing good character to the piece. Switching over to a selection of pop and more radio-friendly tracks, we thought the X3 II again brought good depth and imaging, easily picking out background details like the shakers in Michael Jackson’s Billie Jean. Overall, we think the X3 II provides an excellent price-to-performance ratio, and we’re quite keen to compare against the FiiO X1 as well as some of the other (more expensive) competition like Sony's NW-ZX2, so do watch this space for a head-to-head piece in the future.

The FiiO X3 II will be available for pre-order at a recommended retail price of S$299 at the IT Show 2015, and shipping will begin in April.

To end off, here are the basic specifications for the FiiO X3 II: