Everything You Need to Know About the Apple iPad

July 23rd, 2010, a day where Apple’s magical and revolutionary iPad finally makes its way to our now rainy island. This time, Apple isn’t doing an official launch and has left it to their resellers, so we headed down to their shops in the Orchard Road area to survey the area.

As can be expected, queues have started forming pretty early at the stores and we spoke to the first persons in line and found out that most of them have been queuing since 6am! However the queues weren't as stretched as you may have feared, since there are a couple of other factors at play in this launch. Firstly, the recent iPhone 4 launch announcement in this same time frame have sort of gotten people thinking on what to spend their hard earned cash on. The iPad is still a relatively new form of portable device and people have yet to get acquainted with this form factor (if you need a quick overview of the device, check out our video highlights). The other reason is because the iPad is made available to most of the Apple resellers, there's not too much crowd at any one place. Still, if you're looking to avoid all queues, based on what we've seen so far, it may be a good idea to head to places like Best Denki, which has Apple shops in-store. Bear in mind that these places may have limited stocks, compared to the premium resellers like Epicentre and istudio. 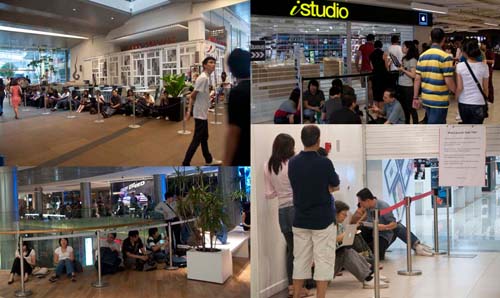 We also got Epicentre to answer some questions about the iPad:

Q: Is EpiCentre restricting every purchase to two iPad unit?
A: Yes, every customer is limited to two iPad units per purchase. This will be implemented across all Apple authorized resellers.

If you aren’t willing to queue or perhaps one of the official outlets ran out of stock, the iPads are still available from shops in Sim Lim Square and Far East Shopping Center, though bear in mind that these may still command a premium pricing, much higher than what you will pay for from the authorized Apple resellers. Last we checked, a 16GB WiFi Apple iPad was going for S$940 - ~$1100, and that’s a hefty premium.

According to most vendors that we spoke to, there are also no plans at the moment  to slash prices down since they will be making a loss as they brought the iPads in at a higher cost due to shipping. We're guessing they are hoping official stocks run out and buyers who can't wait for a restock will get their iPad fix from them.

Now, if you haven’t yet decided if you wanted to get an iPad, and are thinking of getting one, we’ve come up with a handy guide over on the next page to help you make up your mind. Also, if you are getting the 3G version of the iPad, we have broken down the telco plans into an easily digestible form.