Everything worth knowing about the Apple Watch

Depending on which report you read, sales of smartwatches are expected to reach somewhere between 200 and 400 million units annually by 2020. Although analysts cannot agree on how much the smartwatch category will grow, what they can agree on is that growth over the next few years will be exponential and that the Apple Watch will be a catalyst for this. There’s a lot of excitement surrounding the Apple Watch and it is not hard to see why. Not only is the Apple Watch the company’s first wearable device and smartwatch, it is also Apple’s first all-new device in five years - the last being the iPad. Apple first announced the Apple Watch in September last year and we were there to see it. Like so many other Apple devices, the Apple Watch looks and feels like a premium product. However, apart from its looks, and the fact that it will be available in two sizes (38mm and 42mm) and that it will be offered in various case materials and watch bands, we know little other details. Fortunately, Apple has just spilled all the beans and this article will cover all the important bits that has just been announced at Apple’s Spring Forward event, which was held specially for the Apple Watch.

What can the Apple Watch do 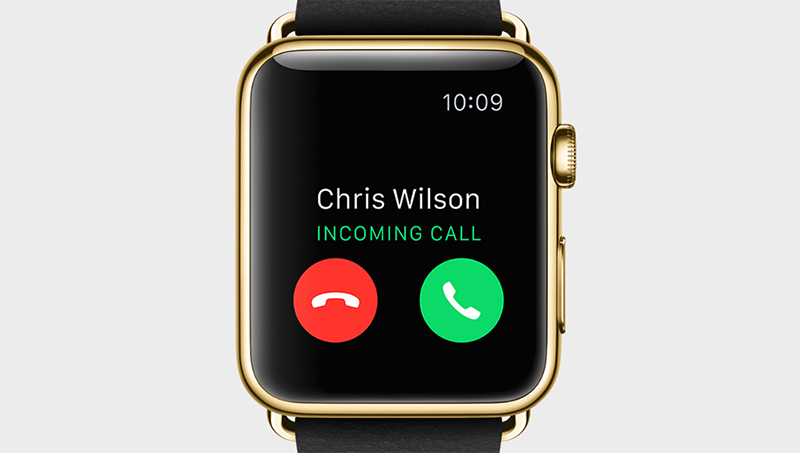 Needless to say, the Apple Watch can also receive calls and text notifications (SMS or third-party messaging apps). However, what’s cool about the Apple Watch is that you can use it to take calls - a functionality missing on most smartwatches. This is because the Apple Watch has a built-in speaker and microphone. Users can also use the Apple Watch to reply text messages. In the demo, we saw Kevin Lynch, Apple’s VP of technology, reply text messages using SIRI and emoticons. There does not seem to be an option for an onscreen keyboard, which is logical since the Apple Watch’s display is not going to be large enough to display a full QWERTY keyboard anyway. SIRI can also be activated simply by uttering, “Hey Siri” and can be used just as you would on your iPhone.

Speaking of notifications, what’s cool about the Apple Watch is that it connects to your phone via Bluetooth and Wi-Fi, so you need not be within Bluetooth range of your phone to receive notifications. This was a severe restriction with other activity trackers and smartphones and it is good to see that Apple is taking a different approach with the Apple Watch. 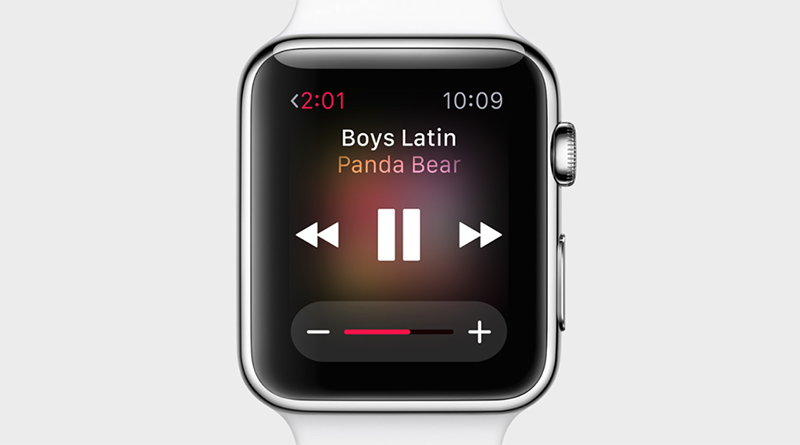 There’s also a new feature called “Glances”, which is similar to the Control Center on iOS. Simply swipe upwards from the bottom of the Apple’s Watch’s display and you will be greeted with quick summaries of the information that you use most, such as your weather, music controls, your heart rate, and your daily activity progress.

Another unique feature of the Apple Watch is something called “Digital Touch.” Using the touchscreen display, users can draw on the display and then send their sketches to other Apple Watch users. They can also send taps and even their heartbeats to other Apple Watch users. This is something new and while it sounds a little gimmicky at this point, it should be quite interesting to see how people will end up using it. We would imagine that it is a little creepy to be receiving someone’s heartbeat.

According to Apple, the Apple Watch will offer up to 18 hours of battery life from a “typical day.” This confirms earlier rumors that Apple was targeting for around 19 hours of battery life. As for water resistance, we hear early reports from people who have had hands-on time that the Apple Watch will have a water resistance rating of IPX7, which means it is only water-resistant and not waterproof. More specifically, this means it is fine to take it into the shower, but it cannot be submerged and it most definitely cannot go swimming. This makes sense as the the Apple Watch does not have a screw-down crown like dive watches do. 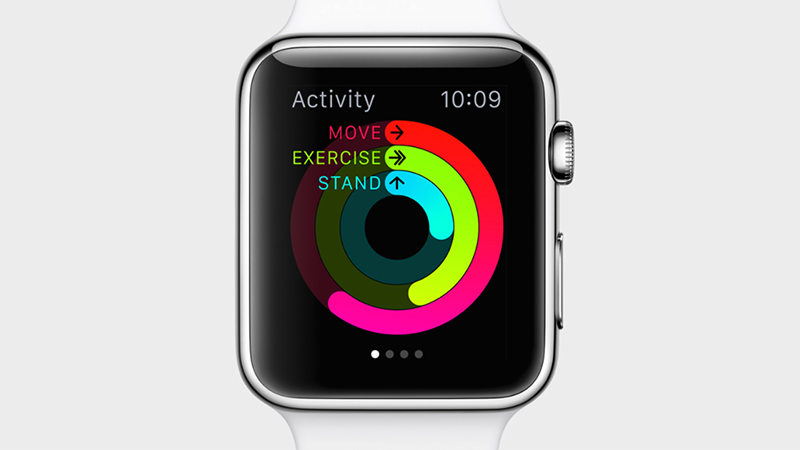 The iPhone and iPad are so popular not only because of their design and performance, but also because of the apps that they could run. Likewise, Apple demoed a lot of cool apps on their new Apple Watch. To kick things off, the Apple Watch will come with some standard apps like your iPhone and iPad, and one of this Workout. As its name suggests, Workout is an app that tracks and measures your workouts. However, it's worth pointing out at this point that the Apple Watch does not have an in-built GPS, so it remains to be seen how the Workout app will map your runs. Moving on, there’s also the Activity app that tracks your daily activity progress and even sends you a summary at the end of each week and provides advice on how to be healthier. Apart fitness apps, Apple also demoed the Apple Watch running Instagram, WeChat, and even Shazam. Now, you no longer need to pull out your phone to find out what song is playing, simply use Shazam on your Apple Watch. 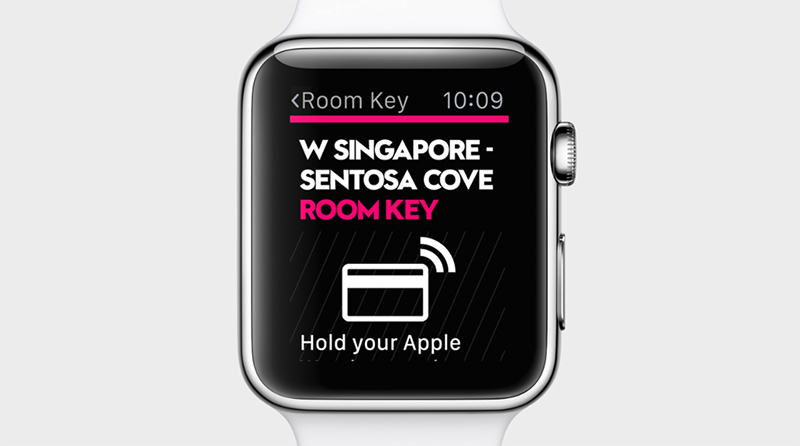 But beyond these apps, the Apple Watch can also be used in ways to make other lives easier. The Uber app will let users call for a ride without pulling out their phone. And if you are near the airport, the Apple Watch can automatically retrieve your boarding details from the Passport app. Already, Starwood Hotel and Resorts have developed an app that will allow Apple Watch users to automatically check into the hotel and unlock their hotel rooms with the watch.

Pre-orders of the Apple Watch will begin on April 10 and shipping will begin later on April 24, but only in selected countries. There are nine countries and they are: Sadly, Singapore is not the list and there is no mention on when Apple will bring the Apple Watch to countries outside of this list.

The Apple Watch, which has a stainless steel case, will be available in a variety of different straps - sports band, leather, steel bracelet and milanese loop. Prices of the 38mm model will begin at US$549 and can increase up to US$1049, depending on your choice of strap. The 42mm model will be priced between US$599 and US$1099. The priciest models are the ones with a black DLC stainless steel case and steel bracelet. 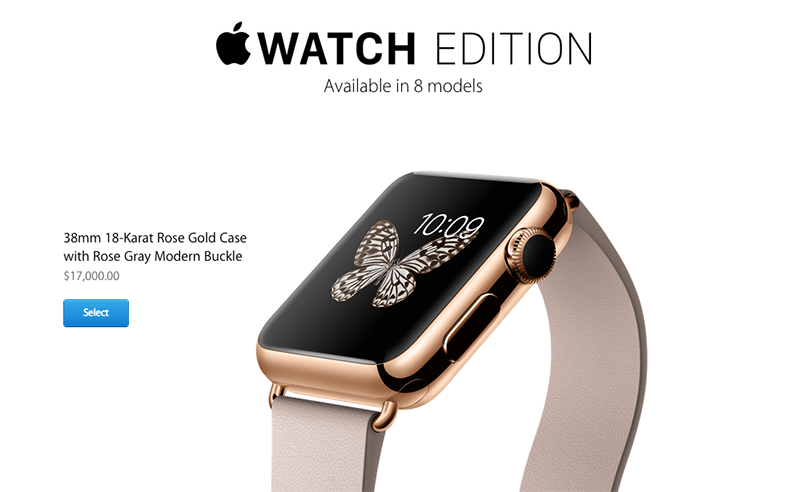