The Era of Curved 4K TVs and Why You'll Want One

The Era of Curved 4K TVs 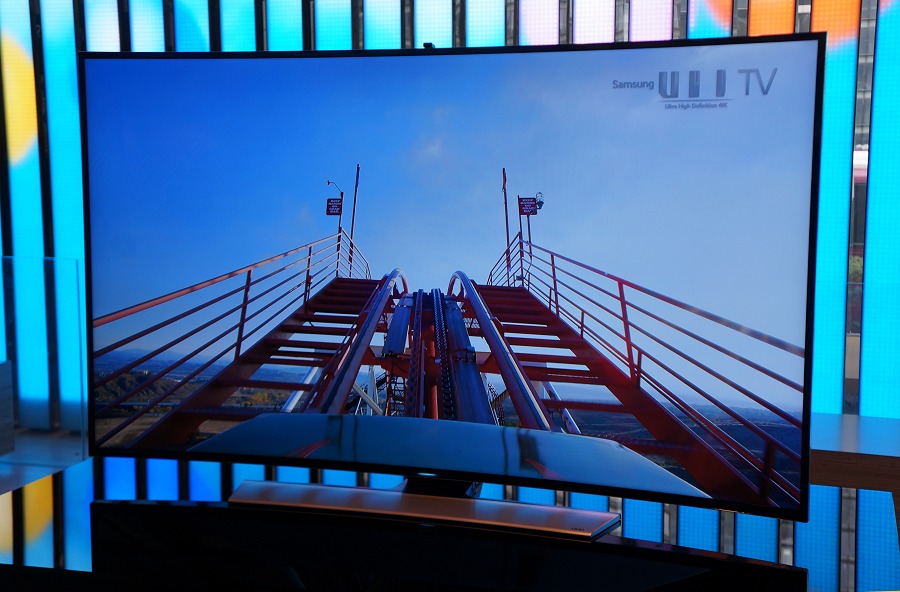 If the TV industry has its way, it won't be long before you'll join the 4K TV or better yet, the Curved 4K TV bandwagon. Think it’s a gimmick? You're not the only ones. After all, the advantages aren’t immediately apparent besides the impressive engineering feat when these TVs have only been showcased at tradeshows without a detailed hands-on experience - at least until now.

Curve TVs aren't exactly new for those who've been following the tech scene closely. In fact, Samsung unveiled a sizable curved OLED TV for showcase at CES 2013. Moving forward, LG became the first to ship a curved OLED TV in to worldwide retail channels and in fact, HardwareZone conducted a PlayTest event to talk about TV trends and show off the LG EA9800 curved OLED TV exclusively to our members. It is however a full HD TV.

Since then, a number of newer curved TV screens have been announced in CES 2014 with Samsung the first to deliver curved 4K TV screens to the market. As reported just a couple of weeks ago at a local media launch event for the new range of Samsung TVs, there are four more curved screen TVs joining the local TV market in addition to the lone LG model. Of the four new Samsung curved screen TVs, two of them support 4K resolutions - making them truly the world's first curve Ultra-HD TVs to hit retail.

To get a better understanding of how the new generation curved UHD TVs are going to improve our TV viewing experience, HardwareZone paid a visit to Samsung's headquarters in Seoul, South Korea. 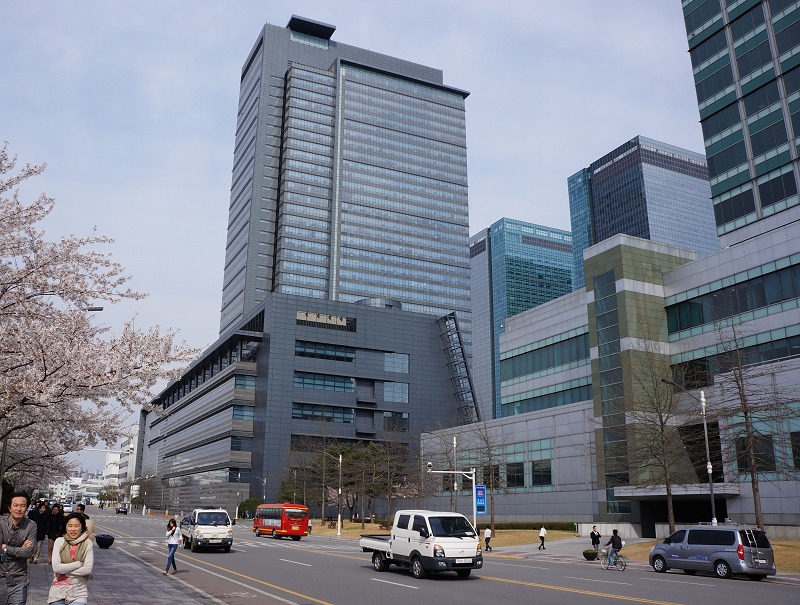 Before we move forward with curved 4K TVs, let's take a step back and study the 4K proposition since curved 4K TVs build upon their advantages.

Last year in 2013, the highlight of the TV industry was the debut of Ultra HD TVs in retail. Also commonly referred as 4K TVs, such TVs are able to render content at a resolution of 3840 x 2160 pixels, which is four times the spatial resolution of Full HD TVs (1920 x 1080 pixels).

Now, a common question we've seen and heard in discussions is why the need to go to 4K TVs when many content and broadcast channels are still struggling to deliver 1080p in this region. Fortunately, most if not all the 4K TVs from the major brands have incorporated image processors that can up-convert any signal or content of any resolution to that of 4K resolution. And this works reasonably well because the upscaling is linear in nature. While it won't match real native 4K content, you'll be pretty satisfied with the outcome. Here's a split-screen sample of Samsung's 65-inch UA9000 series UHD TV upscaling 1080p content:- 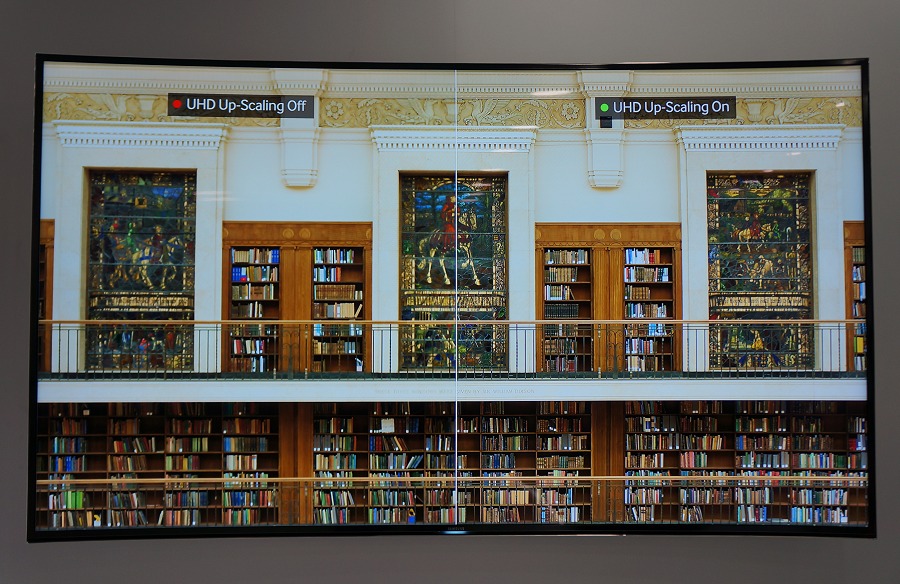 Whether you realize it or not, the limits of 2K resolution (1920 x 1080 pixels) are starting to show these days because of the following reasons:-

4K displays solve both of the above concerns by quadrupling the number of pixels required to be rendered on the screen.

Another not so commonly shown example is how 4K displays can improve your Smart TV experience. The new 2014 TV models from Samsung come with an updated Smart Hub feature set which includes a function called Multi Link Screen that allows you to watch a TV channel and a video from the Smart Hub content channels simultaneously, or watch TV and browse the web side-by-side. 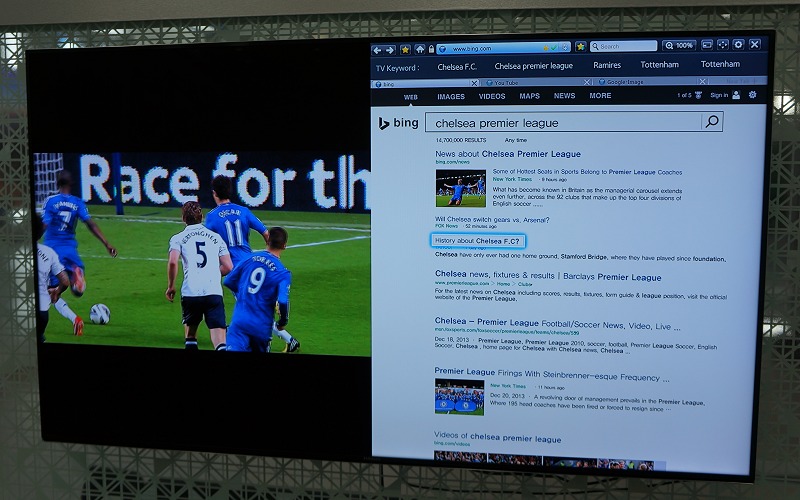 The problem with standard 2K resolution TVs is that web browsing and reading content are still less than desirable where text may not be easily readable at a distance. With a UHD TV, you'll get much sharper text which overcomes this issue. To prove this point at an extreme level, Samsung showed off two similar TV models, one with Full HD resolution and the other at Ultra-HD resolution, displaying the same text heavy content. 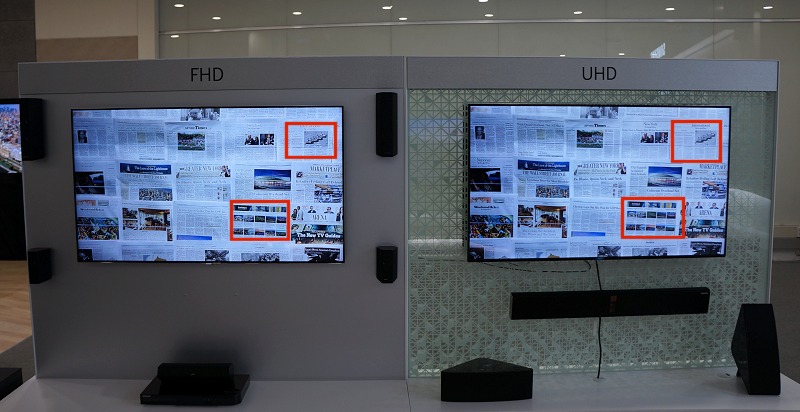 Note that the source content resolution for each is also native to the respective TV's display capability. 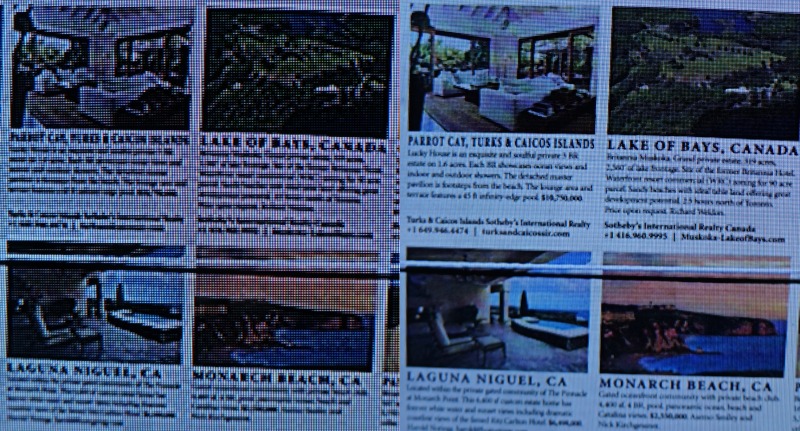 The Case for Curved TVs

Price aside, we guess 4K TVs now sound more palatable. So why should you consider a curved TV or a curved 4K TV? Spending some time with these new generation TVs, here are a few key reasons, some of which might strike you more strongly than others:-

With a curved TV, the entire screen from the center to the edges of the screen is equidistant from your eyes. By bringing the screen edges closer, curved TVs are perceived to offer a wider viewing experience (due to a wider field of view) than the equivalent flat TV counterparts. 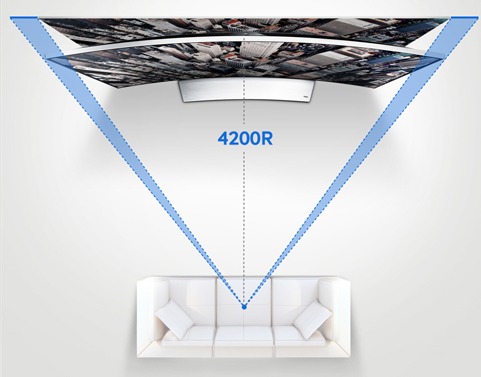 As the entire screen being equidistant from your viewpoint, it provides you with an uniform viewing experience.

Even if you're not seated directly in front of the TV, we've found that viewing experience is still better than if it was a flat screen TV. For example, if one were to sit at the left corner of the room, on a flat TV, the center to the right portion of the screen would certainly appear distorted. With a curved screen, viewing the same area would be less stressful as the screen is slightly curved towards your seated area. You might argue that the left side of the TV would then appear distorted since the screen is curved inwards. We had the exact same thought as well - until we tried the curved TVs personally in various seating positions and found that to be a non-issue. 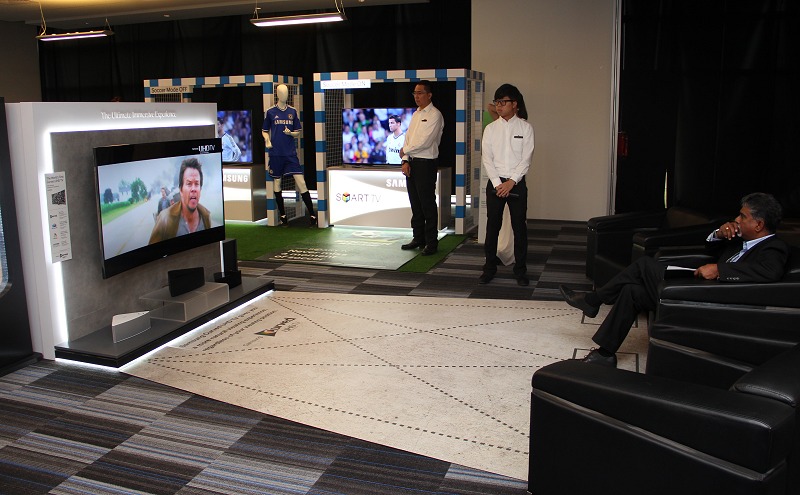 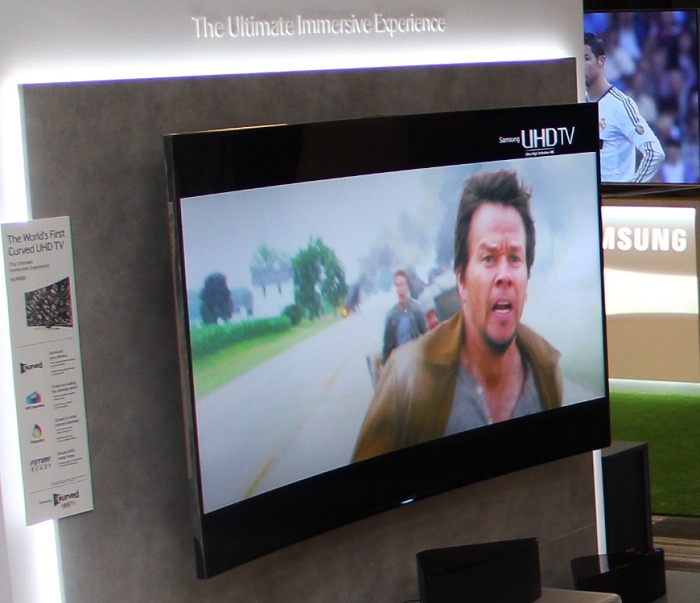 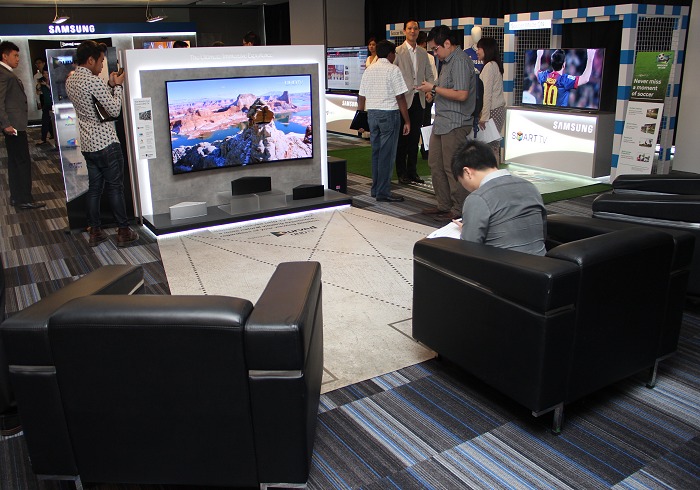 In short, the curve TV experience did indeed improve viewing experience, but it's not immediately evident unless you give further thought and make comparison notes.

Our above findings are also partly due to the time invested by Samsung to figure out the optimal viewing distance as well as the ideal screen curvature. According to Samsung's internal study conducted to visit various homes to figure out the average living room size, preferred screen size and the seated distance from the screen, the investigation revealed that most homes these days have a small living room with a comfortable viewing distance of 3 to 4 meters from their TV.

Based on the viewing distance and the living room size, Samsung has determined an optimal curvature of their TVs using a radius of 4.2 meters, or also otherwise abbreviated technically as 4200R.

Since most homes either position their sitting furniture at a similar distance from the TV or don't have a large living room, Samsung has applied the same curvature to all their curved TVs, regardless of size. This means, the larger a Samsung curved TV gets, your immersive level increases as the screen envelops you more.

This is a different approach to that taken by its competitor, LG, who has chosen to deploy screens with varying curvature depending on screen size, such as 4600R and 5000R. For example, LG's sole curved 55-inch EA9800 TV uses a curvature of 5000R. Using a larger radius, this means its curvature is slightly less pronounced than the equivalent sized Samsung model.

At this point of time, these differences aren't immediately apparent and it will take us time to do a more thorough evaluation to convey our findings. So stay tuned for that in the future.

Say yes to less reflections and light interference with curved TVs! This has been a major bugbear for many home owners as most TVs have a glossy finish which ends up performing poorly in rooms with bright ambient light. Curved TVs definitely help reduce reflections and according to Samsung's study, it's about 50 to 80% less than a flat screen TV. This alone helps improve the TV's contrast ratio by 50%, thus giving it a more vibrant, punchier and clearer picture than an equivalent flat TV.

As if the curved TVs needed any more assistance to further stand out, Samsung has equipped its curved TVs with a function called Auto Depth Enhancer that analyses images and helps create more visually stunning images that give it a sense of depth – somewhat. It’s not 3D, but the enhancement does give it a slight tinge of that effect.

It’s an exclusive function to their curved TVs and you can’t disable it, nor can you find it in their traditional flat panel TVs. Here’s a snippet from Samsung on what the function does followed by sample photos of it in action when compared with a flat TV:-

“Samsung utilizes an area-based contrast enhancement algorithm called Auto Depth Enhancer to elevate the perceived depth from a curved screen for consumers to experience life-like, multi-dimensional pictures and maximize their immersive experience with Samsung curved TVs. Auto Depth Enhancer works by splitting each frame into multiple areas to analyse the similarity of brightness and color histogram. It then automatically optimizes the contrast for each area to add greater depth to the scenes” 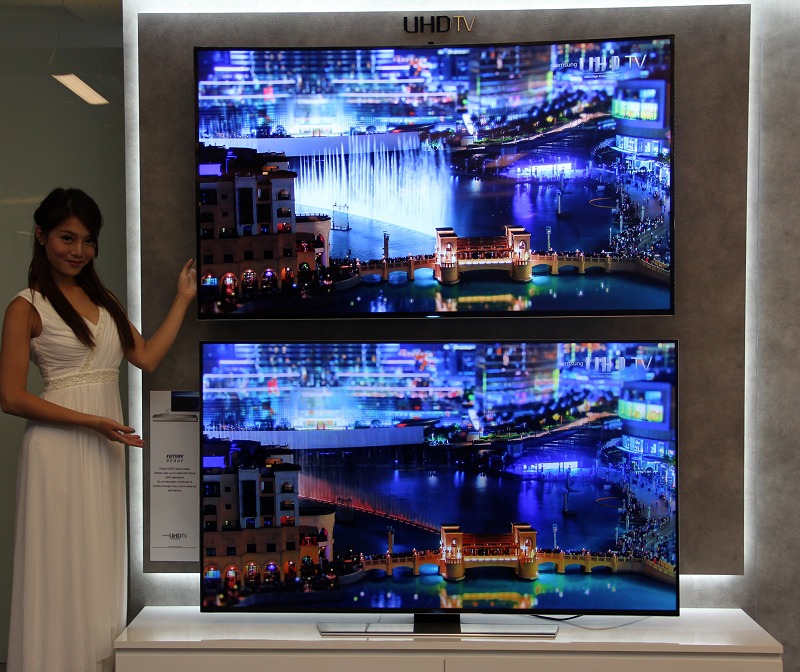 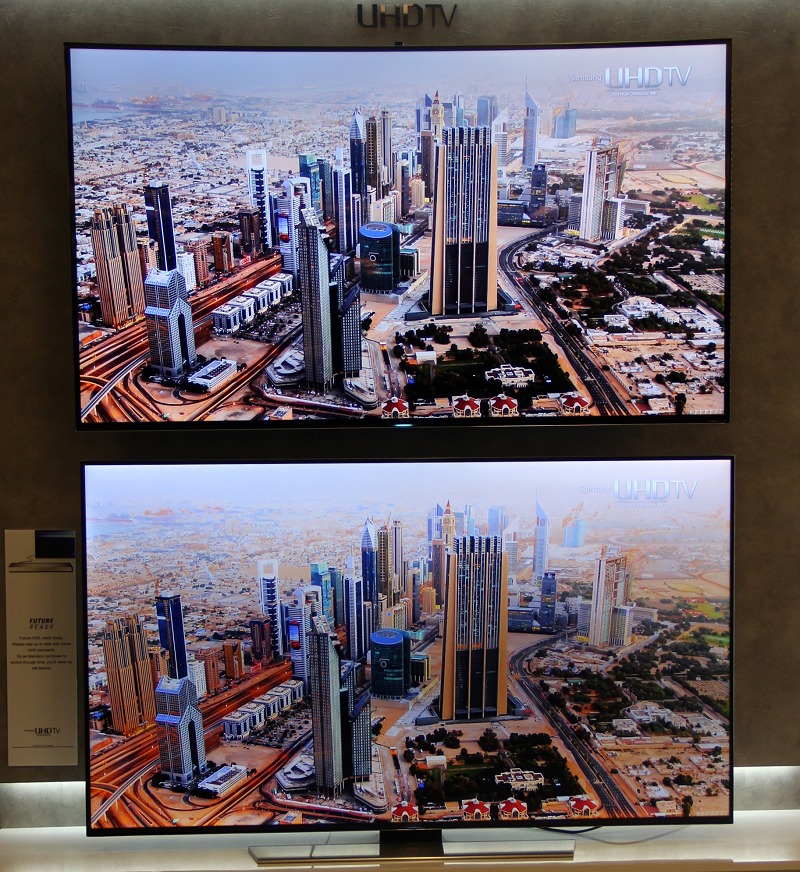