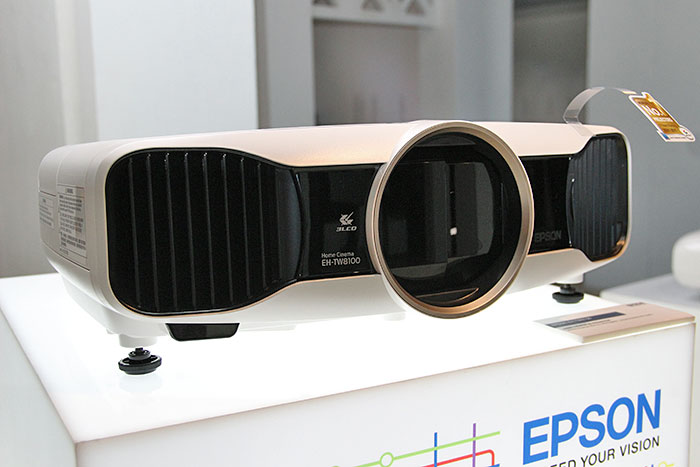 At a press event held earlier today, Epson unveiled six new 3D and two new integrated interactive projectors. Interestingly, not all six 3D projectors are aimed at home theater enthusiasts; a couple of them have education and business users in mind. We were of course on hand at this massive launch, so read on for the highlights.

The EH-TW8100W is the highest-end model of the three. A 3LCD projector, it sports an Epson 480Hz panel drive technology to achieve super-bright 3D images. To rephrase what we’ve written a year ago, the result of doubling the refresh rate (most other 3D projectors have a refresh rate of 240Hz) is a significant reduction in blackout time (which is the time the images transit from one frame to another). And since the lenses are closed for a shorter period of time, the 3D images appear brighter. 3D brightness is also improved (by about 10%) through a lamp boost technology. The EH-TW8100W uses rechargeable RF (radio frequency) active shutter 3D glasses.

Other features of the EH-TW8100W include a high 2,400-lumen brightness, 320,000:1 contrast ratio, 2D-to-3D conversion, 3D depth adjustment, wide mechanical lens shift range, a flexible 2.1x optical zoom, frame interpolation, and something called Super Resolution. With diving too much into the technicalities, in a nutshell, the last two technologies ensure a sharper image and a smoother screen movement. 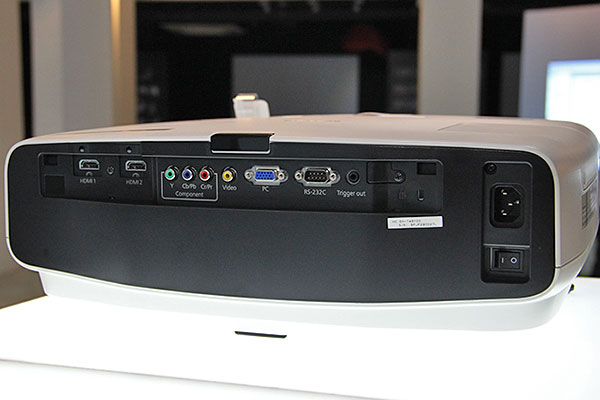 What sets this EH-TW8100W and the EH-TW8100 apart is that the former has a built-in WirelessHD receiver. In other words, you can stream HD content wirelessly (yes, even 1080p) to the EH-TW8100W. However, the way that it’s done is not through wireless network streaming. Included in the package is a transmitter box; this box is where you connect (with cables, of course) your playback sources to. The transmitter would then stream the signals to the projector. The benefit of WirelessHD is obvious: you can now leave your sources (Blu-ray players, game consoles, etc.) at one end of the room without having to run long cables right up to the back of the projector.

Readers who have been following our IFA 2012 coverage would notice that Epson has introduced the flagship EH-TW9100W during the show, which is the successor to the EH-TW9000W the company launched at the same event in 2011. Same as last year, we won’t be seeing this flagship model here. Realistically speaking, the differences between the EH-TW9100W and EH-TW8100W are few. The slightly cheaper EH-TW8100W can’t use an anamorphic lens attachment, and doesn’t support ISF certification. 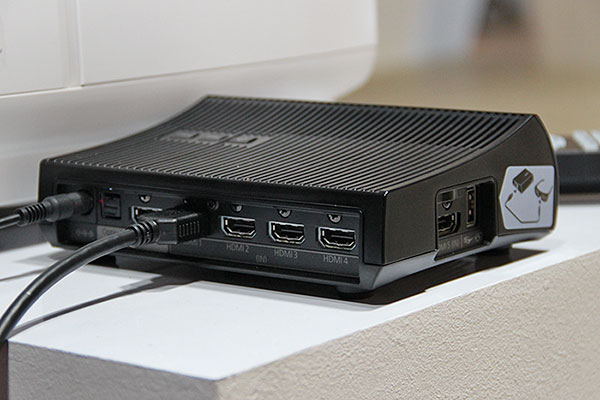 On the other hand, the EH-TW8100 is essentially the EH-TW8100W without the WirelessHD function. If you don’t need this feature, get the EH-TW8100 and use the S$300 in savings to buy more Blu-ray movies.

For something well below S$2,000, there’s the EH-TW550. A 720p 3D-capable projector, it’s aimed at entry-level users. If you value 3D capability over 1080p projection, this is one to consider. For a typical home theater enthusiast, we believe 1080p projection would be a much more important criteria, thus the EH-TW550 would likely appeal to educational institutions and other small-scale commercial deployment needs where capturing audience interest with 3D featurettes is of higher importance over detail levels. 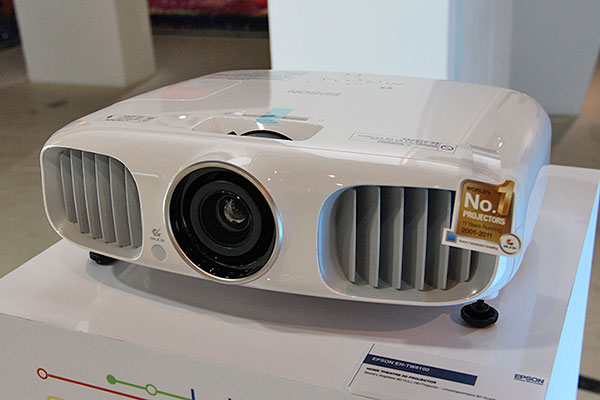 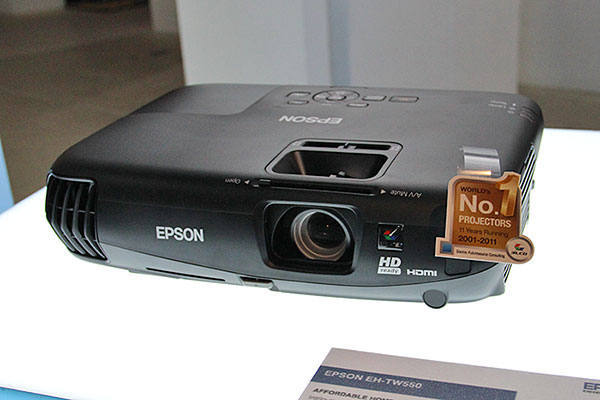 The EB-W16 and EB-W16SK are Epson’s first 3D projectors to target education and business users. The EB-W16 is an active 3D model, whereas the EB-W16SK consists of two stacked projectors for a passive 3D setup. The core hardware of both is essentially the same. Both have a native WXGA resolution (that’s 1,280 x 800 pixels), 1.2x zoom (though throw ratios are different), and a 4000-hour lamp lifespan.

Now, one might question the rationale for having two models that use different 3D technologies. To that, Epson’s response is that the EB-W16 is better suited if you need a high brightness 3D projection for smaller audiences. On the other hand, the EB-W16SK is more ideal for large venues. Why? Well, the stacked setup, by virtue of having two projectors, gives brighter 3D images. The same can be said for 2D too (4,100lm vs. 3,000lm). Also, compared to active shutter 3D glasses (which the EB-W16 uses), its passive polarized 3D glasses that don’t require batteries cost much cheaper.

In case you're wondering, no, you can't buy two EB-W16 projectors and stack them up to make a passive 3D setup. The main reason is that the EB-W16 and EB-W16SK use different firmwares. You can of course use the EB-W16SK as two separate 2D projectors.

Like the other new 3D projectors, the EB-W16 and EB-W16SK support all common 3D formats, such as Side-by-Side, Top-and-Bottom, Frame Packing, and Frame Sequential. 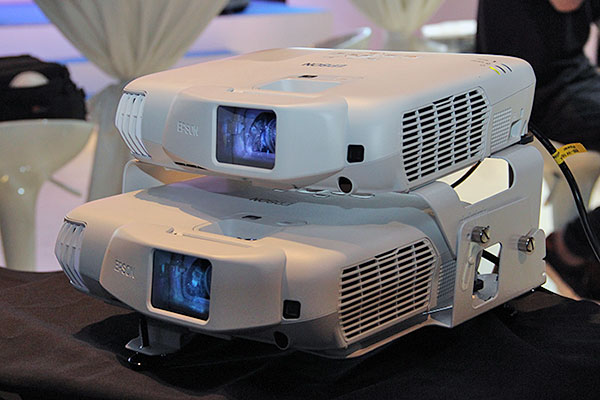 Home theater and 3D projectors weren’t the only types of projectors launched today; a couple of interactive projectors also had their fair share of the limelight.

The EB-436Wi (WXGA, 3,000lm) is essentially an upgrade of Epson’s existing short throw projector series with integrated interactive capabilities. The EB-1410Wi (WXGA, 3,100lm) is an ultra-short throw projector. Like the EB-436Wi, there’s no need for drivers for the interactive features, and the projector is able to auto calibrate itself. It also supports Microsoft ink tools so that you can write on Microsoft documents and save them back into their native format. Another unique feature is what Epson terms “PC-less interactivity”. In short, you can call up an interactive whiteboard without having a PC attached to the projector. You can even save the screens as JPEG or PDF files onto USB flash drives, or email them without a PC. And with the free Epson iProjection app (available on the Apple App Store and Google Play store), you can wirelessly project images and files stored on your mobile device. Multi-location interactivity is also a strong suit of the EB-1410Wi. For example, collaboration for up to four locations can be carried out, and not only can the participants in all four locations see the projected image, they can even annotate and save the document. 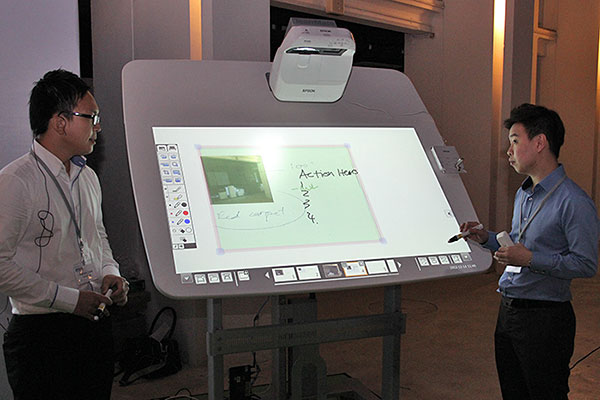 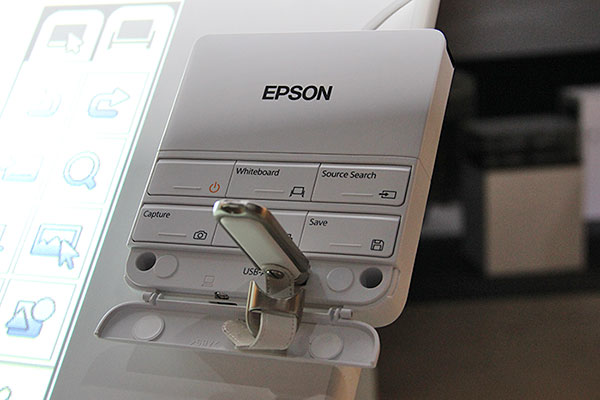