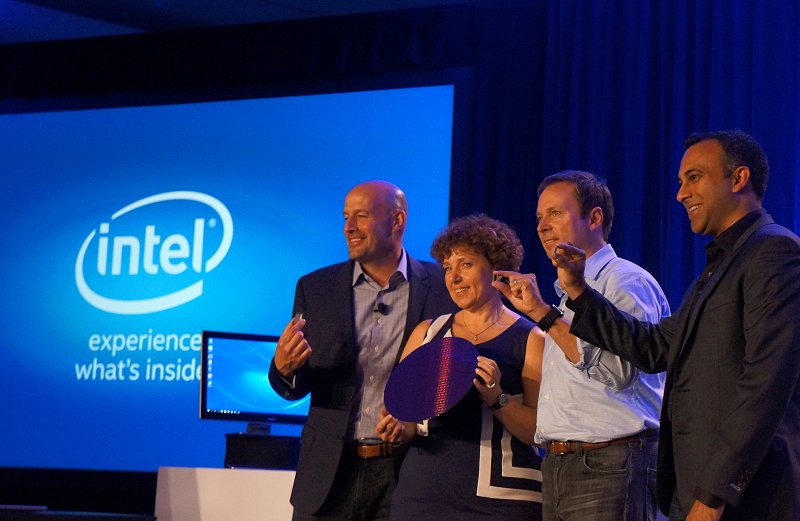 Earlier this month, Intel unveiled a select few next generation processors codenamed Skylake at the Gamescom 2015 event. Skylake for the desktop is Intel’s first concentrated effort to release mainstream and high-end processors in the last two years to replace the full Haswell microarchitecture processor line-up that first debuted in 2013.

The Core i7-6700K and Core i5-6600K quad-core processors are the first among many to follow in the months to come. The Core i7-6700K is a direct replacement for the current top of the line Core i7-4790K Haswell chip where clock speeds, capabilities and price are concerned but one can’t help wonder if speedier parts are in the pipeline given the numerical numbering scheme used for the new Skylake processors – both end with “00” instead of “70” or “90” for example.

The release of the two Skylake desktop processors is just the tip of the iceberg and there's a boatload of new processors that launch today and even more in the months to come. Skylake for mobile computing alone has nearly 30 processor SKUs to address an ultra wide array of devices ranging from workstation, DTR, Ultrabooks, 2-in-1 convertible notebooks and tablets.

Broadwell already brought the 14nm process technology node to mainstream earlier this year, so what else can Skylake offer? In short, you can expect more power savings and even more performance thanks to a revised microarchitecture design with a focus on drilling down to optimizing specific usage scenarios. Skylake is also looking to be a much smoother launch with better availability of its 14nm processors, which Broadwell sort of struggled and certain SKUs badly delayed.

The 6th generation Core processors are also designed for Windows 10 in mind and to give more context on how the combination will enable new computing experiences, we'll begin by sharing the engineering team’s goals for this processor architecture, followed by the architectural improvements that support the processor's new capabilities.

When the Skylake engineering project began four years ago, it was meant to refresh the PC platform with a limited TDP offering to suit this target market. Over time, the goals and requirements grew as further studies were conducted. The final agreed development vector for the Skylake processor architecture now encompasses addressing traditional PCs, Mini PCs, conventional notebooks, 2-in-1 portables and even tablets. The form factor range has now more than doubled with the architecture requiring scaling from 4.5W to 91W TDP with about 20 TDP points to address the various needs and product segments. On the lower-end scale, Intel wanted to continue what Broadwell established by continuing the SoC strategy but ensure 40 to 60% less power draw when handling video playback, dabbling in multimedia content and of course, when the system is idle.

In short, Sklyake endeavors to deliver in these six vectors through 14nm microarchitecture enhancements:- 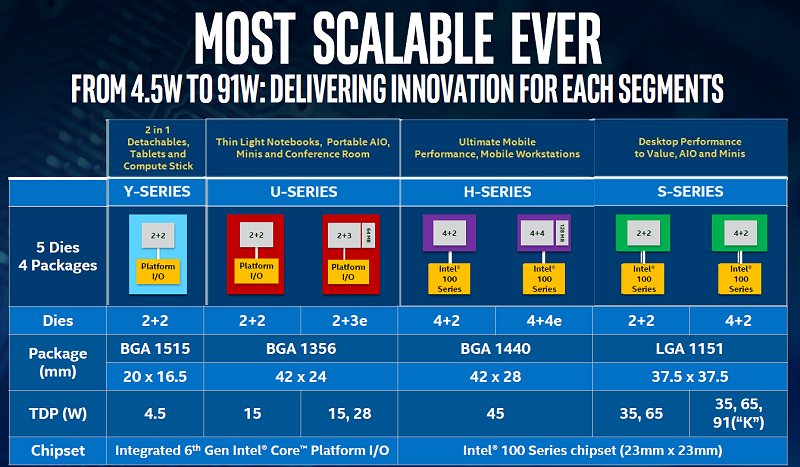 Should you upgrade to a Skylake processor?

As noticed from recent microprocessor advances, the net gain from one generation to another isn’t quite obvious in recent years. Furthermore, engineering is reaching a point of limited returns with existing transistor designs as they face challenges to shrink current lithography processes to etch ever finer circuit features on the silicon semiconductor.

Instead, there have been more efforts in improving performance-per watt efficiency, thus enabling chip vendors to cram more transistors for accelerating dedicated tasks and notching up integrated GPU capabilities to co-support the CPU. Advanced operating systems like Windows 10 are able to see all processing units available and task them appropriately instead of leaving them idle as has been the case for most of the PC era.

In general, Intel is targeting at least 5-year old systems which they claim will see up to 80% performance gains with a high-end Skylake system upgrade. They also estimate that 3-year old machines can stand to see gains of up to 30%. So if you're running on an old platform, there’s plenty that an Intel Skylake system will offer to consider upgrading.

Simply put, if you’re running a Haswell microarchitecture system, you’re likely not Intel’s target audience - unless it's an entry-level machine and would like to top up to a high-end Skylake platform. If you’re using a mid-range or high-end Haswell / Ivy Bridge class processor, again, there isn’t much immediate gains unless new software with more advanced extensions are utilized.

For enthusiasts, you can expect increased overclocking capabilities due to a microprocessor design change to exclude the fully integrated voltage regulator (FIVR) in each CPU core that was present in Haswell and Broadwell chips. The FIVR probably made sense for a mobility-first CPU design choice, but for overclocking friendly desktop processors, that works against it with increased heat build-up and finicky base clock controls. All these duties are now back to the motherboard, so you can probably expect a slight increase to mobo prices. On the upside, you can now look forward to a finer grained tuning experience as you ramp up your motherboard base clock and memory clocks to hit new highs for your overclocking attempts.

Further to that, expect new I/O support for your add-on cards, storage and connectivity with the newly accompanying Intel Z170 chipset that have been launched for Skylake. You can read more about that chipset in our Intel Z170 motherboard previews.

However, it’s the growing Mini PC segment that will stand to gain the most as Intel’s new Skylake platform delivers new capabilities and improved performance-per-watt solutions to fit into those NUC-like palm-sized systems. 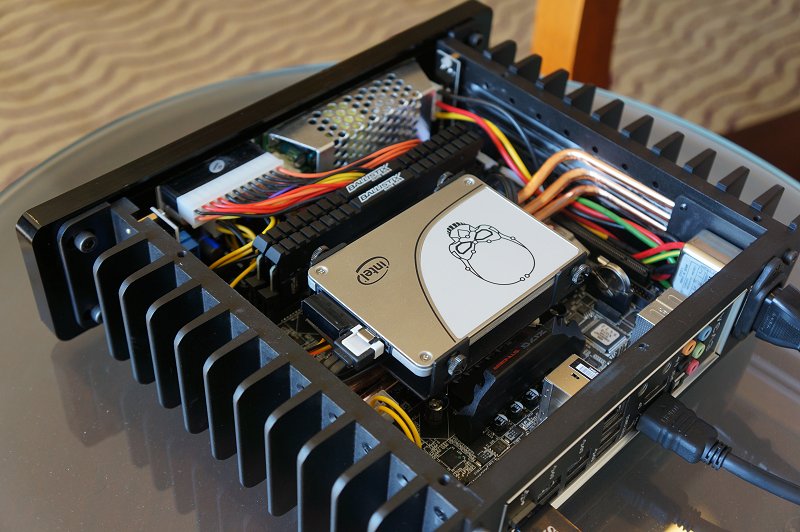 An improved graphics engine with higher performance to push out more frames per second on your online multiplayer games as well as better media handling abilities such as 4K/UHD video playback on up to 3 full screens, ability to wirelessly connect to a WiDi-ready TV and Intel Ready Mode technology for instant usability are just some of what you can expect (as long the platform has relevant supporting hardware and software stack implemented). Just exactly how much can you tax Skylake’s new integrated graphics engine? Would you believe that it can handle 18 4K videos through a new Photo Mosaic software off a Core i7 Skylake processor? As unbelievable as it sounds, you’ve got to check out this video demo:-

Remember the pocket-able PC with the Intel Compute Stick? Well, it’s getting a makeover as well with a Skylake microarchitecture based processor, and we can tell you that it’s not going to be using an Atom-class processor. Intel has mentioned that it will use a new 6th Gen Intel Core M class processor, so expect a jump in capabilities for the next generation Compute Stick when it debuts. 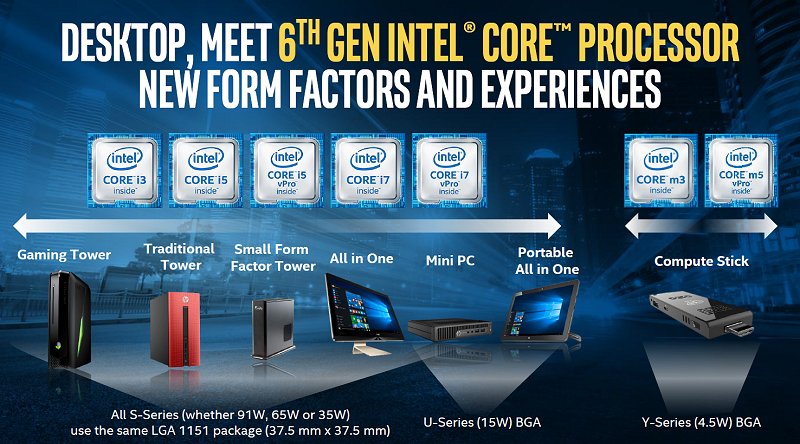 The above slide from Intel basically sum up the Skylake performance expectations over an older generation notebooks that are five years of age. While a lot of the speed-up gains are due to transitioning to solid state storage, the processor is still key in a several areas to determine the performance throughput depending on the tasks at hand. Battery life savings is however largely due to a more efficient processor and graphics engine and how they interact with the rest of the platform. At Intel’s IDF 2015, they’ve flaunted the experiential difference that a typical consumer can expect from upgrading such a system and we’ve captured this demo for your viewing:-

Beyond the processor’s efficiency and performance improvements, Intel is also pushing new platform features with more design wins to feature Thunderbolt, WiGig and Intel RealSense technologies on Skylake powered mobile systems. These will come together to enable new experiences from mobile notebooks and improve the quality of computing. Intel also shared the possibility of wirelessly charged Skylake mobile systems to hit retail sometime next year, which will truly go the distance to support Intel’s current campaign to help cut the cord and clutter.

On the software side of things, Windows 10 supports a new Modern Standby state called the Disconnected Modern Standby (DMS) and this relies on the low power idle state S0 that’s supported on the latest range of processors like Skylake. The Modern Connected Standby state that debuted with Windows 8 assumes there’s an active Wi-Fi connection to allow periodic software and status updates, while being able to provide an instant-on experience from standby. It however required an SSD to offer Connected Standby. DMS on Windows 10 doesn’t require a Wi-Fi connection, assumes infrequent software updates and can be enabled with even a HDD - thus delivering a near instant-on experience in a cost effective system. 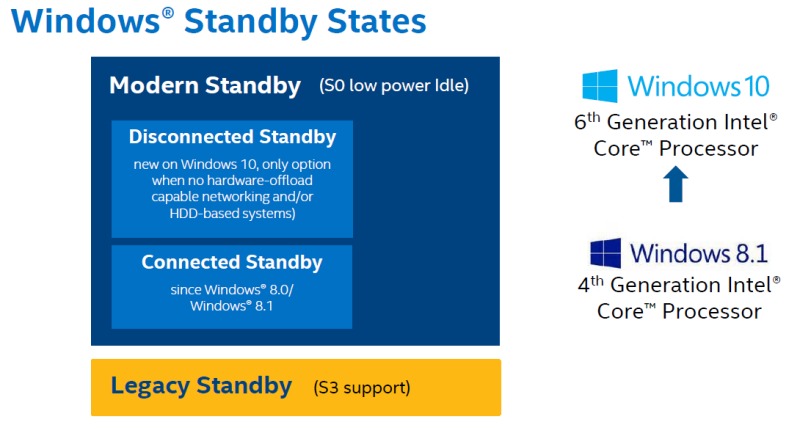 Beyond that, Windows 10 also offers other more exciting functions that you can better leverage off a 6th generation Core processor. Cortana now plays a bigger role as it is integrated within the Windows 10 operating system core and supports voice activated commands via Microsoft’s "keyword spotter" to interpret important keywords and phrases. It uses the CPU’s audio processing pipeline to help achieve high Correct Acceptance (CA) and low False Acceptance (FA). Windows 10 allows hardware DSP acceleration and to that extent, the Skylake platform support hardware offload for voice activation through an updated audio engine in the chipset. This demo video shot at IDF 2015 captures how Windows 10 on a Skylake mobile system responds to Cortana Voice Activation:-

Windows Hello on Windows 10 is yet another experience you can expect your Skylake notebook to support since it will likely be equipped with new hardware such as biometrics for face, fingerprint or iris-based recognition login. Essentially, it’s a password-free login experience, but we don’t expect this to be available on entry-level systems due to the price point of such systems. For those that do, you can probably expect to see Intel’s newer RealSense F200 camera incorporated that’s able to map your face more accurately with lower FA rate and has anti-spoofing detection built-in. Here’s a demo experience we witnessed from Intel’s showcase at IDF 2015 of Windows Hello at work with a Skylake system incorporating the newer RealSense F200 camera and it seems to work really well (along with a wireless charging demo in action):-

How about real-time 3D modeling and media crunching like running multiple 4K video streams simultaneously? The mobile Skylake’s graphics engine is quite the powerhouse as witnessed from even on a Core M class on an upcoming Windows 10 tablet system:-

Did we get you all interested in Skylake? We've got more coverage in the following articles:-