Effective Charging of the Apple iPad (2012) 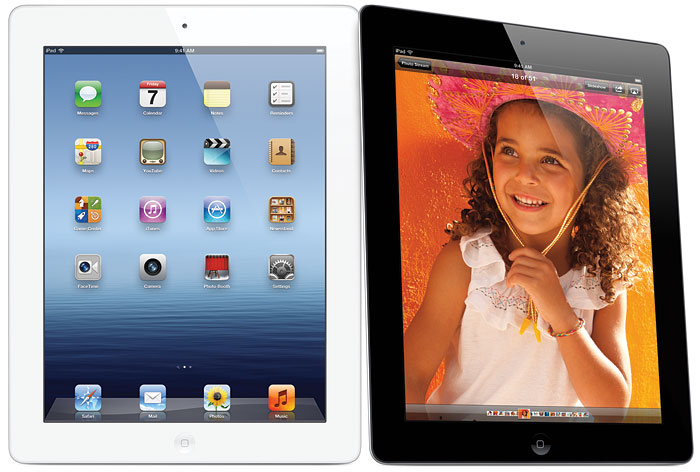 Shortly after the 3rd generation iPad was released, there was a report that it doesn't reach full charge when the 100% icon is shown; instead, it takes up to an extra hour or two before charging stops. Apple has even come out to clarify the issue. As reported by AllThingD, Apple VP Michael Tchao has told them that the iPad (and iPhone and iPod touch) does indeed display the 100% indicator just before it's completely charged. It'll continue to charge to 100%, then discharge a bit, and charge back up to 100%. This charge-discharge-charge process continues till you unplug the cable.

It's perhaps safe to say that most users would not know - and care - if the battery indicator is telling the truth or not. Why? Because for us normal users, as long as we get that 9–10 hours of battery life, who cares if the 100% indicator isn't really 100%.

That being said, there's one thing that most people will notice: The new iPad (3) takes much longer to charge than the two iPads before it. Why is that so?

Firstly, realize that the new iPad has a higher-capacity battery than the previous two iPads—42.5 watt-hours versus 25 watt-hours. So when using the same 10W USB power adapter from Apple, naturally it takes longer to charge. This part is easy to understand.

Why? Allow us to explain.

According to the USB specifications, a USB 1.0 or 2.0 port can provide a maximum current of 500mA (milliamp) at 5V (volt) to a high-power device. Some devices however require more than 500mA to charge—the iPad is one example; it needs about 1A (amp)1.

However, as stated in the Battery Charging Specification 1.2, a USB 2.0 charging port is allowed to supply more current—up to 5A. Newer Intel-based Macs are able to provide up to 1.1A at 5V from their USB 2.0 ports. In fact, Apple has a support article that details this:

To meet requests for additional power from these Apple peripherals and devices, some Apple computers and displays can provide up to 1100 mA at 5 V through the port to which the Apple peripheral or device is connected.

But there are Macs and Apple displays that can't do it. As noted further down in the support article:

Apple computers and displays that were introduced before 2007 support only 500 mA at 5 V from their ports and do not offer additional power.

Indeed, here's a screenshot of the USB portion in in System Information when we plugged an iPad to a late 2009 iMac: 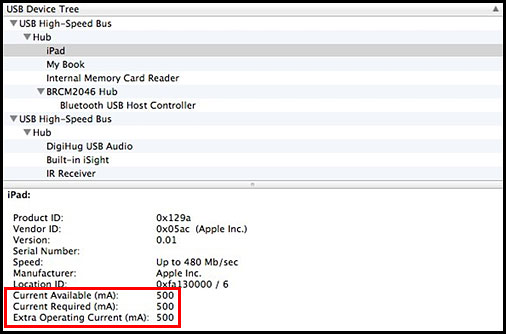 So, to charge an iPad (all generations), we need a high-power USB port that can provide about 1A of current. This is why the iPhone USB adapter is able to charge the iPad, since it's rated at 1A as well. And this explains why older Macs or PCs (and many USB hubs, powered or non-powered) that only supply 500mA via the USB port will result in the "Not Charging" message in the status bar beside the battery icon.

That said, the iPad is capable of charging even when it shows the "Not Charging" message. The trick here is to not use the iPad when you intend to charge it - instead, put it to sleep. The battery will then charge, albeit very slowly.

Is Having More Current Better?

Now, 9to5Mac has reported last year that the new MacBook Pros are able to provide 1,600mA (1.6A) of "Extra Operating Current". With the default 0.5A, they add up to 2.1A of current, which is about the same as the iPad's power adapter. In theory, it should then charge as fast as the adapter.

Below is a screenshot of the USB portion in System Information when we plugged in an iPad to a late 2011 15-inch MacBook Pro: 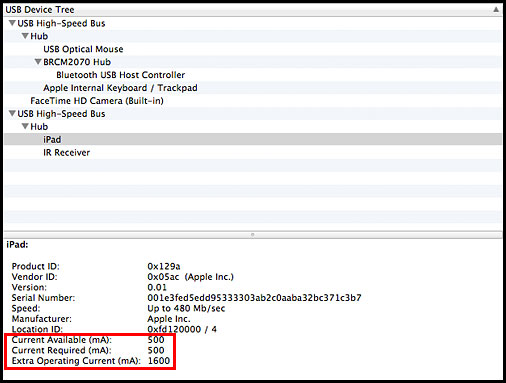 DIY enthusiasts or readers following news on our website may know that Gigabyte is one motherboard vendor that has boards that can supply as much as 3 times the typical amperage to their USB ports. So for a USB 2.0 port, it can provide up to 1.5A; for a USB 3.0 port, up to 2.7A. And with the latest driver update, these motherboards now support fast charging of the new iPad. According to Gigabyte's marketing literature, the supported motherboards are able to quick charge your iPhone, iPad and iPod Touch up to 40% faster than the competing motherboards.

Since we have the new iPad, an assortment of systems and chargers, as well as a Gigabyte board that supports the "3x USB Power" feature, we decided to conduct a quick experiment to see how the power sources with their various power outputs can affect the charging time of the iPad. But instead of charging (and discharging) the iPad fully, which would have taken a much longer time to amass results, we only charged it to 5%. This is just to give an idea how the charging rate is affected by the charging source. Since it's very unlikely that the charging rate is linear, don't assume that a timing listed below multiply by 20 will give you the timing to charge the iPad to 100%. In any case, here's the criteria that we used: 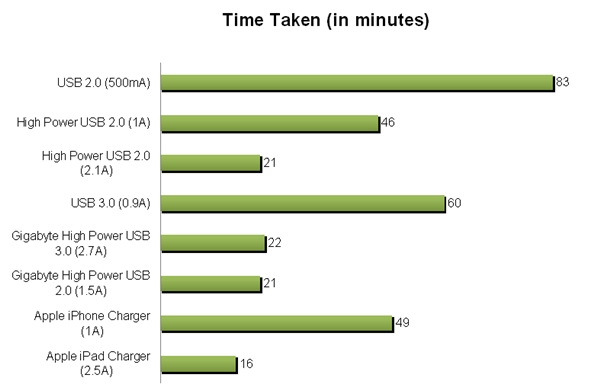 Based on the figures above, Apple's bundled 10W USB charger (2.5A) took the shortest time (16 minutes) to charge the iPad from 0 to 5%, while a typical 500mAh USB 2.0 port took the longest (83 minutes). The Gigabyte high-powered USB ports lived up to the company's claims, as both the USB 2.0 and USB 3.0 ports performed admirably against the standard USB ports.

And as you can see from the figures above, the charging time for the new Apple iPad varies according to the type of USB port. For example, if you are using the latest generation of MacBook Pros, you are in luck as its USB port can deliver up to 2.1A.

At this point, another question arises: Will that mean that the iPad will charge even faster if we can find a 20W charger, or one that provides 5A at 5V? In theory, it should. However, know that it also depends on the charging circuitry of the iPad. It may not be designed to support a charger higher than 10W. And we posit this may be the case. Else, Apple would have released a new 20W charger when it announced the new iPad.

In summary, yes, the new iPad craves for power - and more so than its predecessors. As noted in another Apple support article about charging the iPad's battery, the fastest way to charge any iPad is to use the bundled 10W USB power adapter. If you're not one who'd carry the adapter around and relies mainly on your computer's USB port for recharging, hopefully you now have a better understanding of what works and what doesn't.