Great audio from a small source - the Devialet Phantom Reactor

Note: This article was first published on 16th November 2018.

It’s been a while since we’ve heard from the people at Devialet, so we were naturally quite intrigued when they said they had a new product - smaller than the previous Phantoms, but still very much as capable. 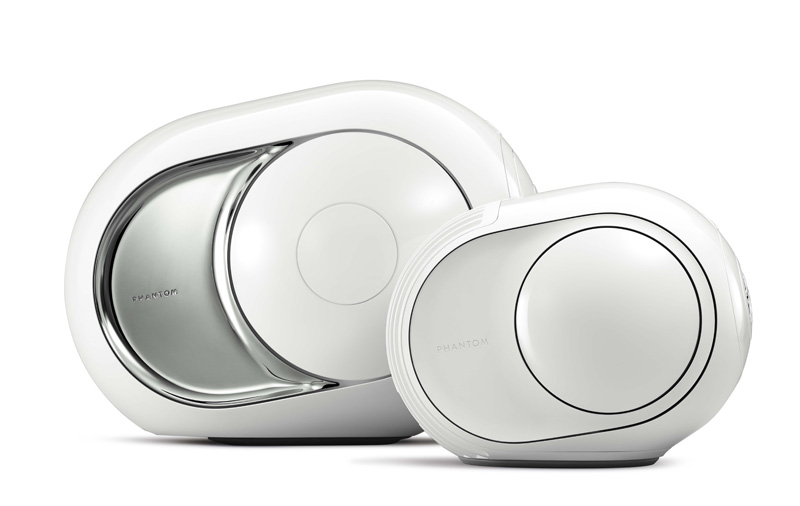 Enter the Phantom Reactor, a mini Phantom that’s ¼ the size at 219 x 157 x 168mm, and weighs only 11lbs (about 5kg). As you can see, the new speaker looks very much the same as the Phantoms before it (now called the Premier line), just smaller and of course lighter. A line of touch sensitive controls run over the top of the speaker, but more is available via the app.

We’re told no less than five hundred thousand hours of research and development work went into bringing all the core technologies from the Phantom over, so you still get great bass thanks to the Heart Bass Implosion technology, and that warm analog sound thanks to the Analog-Digital Hybrid (ADH) processors. As you can see from the clip below, it's very much the same experience you'd get with the full sized Phantom Premiers!

A slight compromise has been made to accommodate for the lack of space though. Where the Phantoms have two woofers, a mid-range tweeter and a driver for high-frequency notes, the Phantom Reactor has only two woofers and a single full range driver to cover both mids and highs.

Two versions of the Phantom Reactor are available - one with output rated for 900W (or 98dB), and the other rated for 600W (or 95dB). For reference, the larger classic Phantom was rated for 1000W, so you’re certainly not giving up that much in terms of power. Consider also that the volume of a large scale concert is about 120dB, and you’ll see just how much more practical the Phantom Reactor is. Of course, this is also reflected in the price point. The classic Phantom starts from S$2,890, whereas the new 900W Phantom Reactor goes for S$2,390. Go with the smaller 600W version, and it’s just S$1,890, a full thousand dollars cheaper!

That's almost enough to pay for a second unit so you can get a true stereo setup - when the update becomes available. Stereo pairing, unfortunately, is still under development, as is multi-room capability, but we’re told they should be coming by next year via a firmware update. We had a chance to hear the 900W Phantom Reactor compared to the Classic and Gold Phantoms and were honestly shocked at how close the performance was. The Gold Phantom obviously delivered a fuller sound with a wider soundstage (and with power to spare), but the Phantom Reactor will easily fill most apartments with sound and isn’t that far off in terms of audio quality either.

Devialet tells us the Phantom Reactor goes down to as low as 18Hz and -6dB, thus providing the infra bass frequencies that move you even if you don’t hear them. On the high side, it reaches up to 21kHz, well above the recognized range of human hearing. We detected no distortion even when blasting the speakers at full volume, though we're pretty sure you won't want to go that loud at home (unless perhaps you live in the middle of a forest). Our listening session had a variety of tracks, starting with the operatic Gianni Schicchi: O Mio Babbino Caro by Sir Charles Mackerras, and we were impressed by how this small speaker (the 900W version) was able to provide such full-bodied sound with a such a wide, even spread.

Moving on to Runnin’ by Pharell Williams next gave the speaker a chance to show off its lows, and it provided a good punchy bass line to inject energy to this faster moving piece.

Highs are nice too, though we discovered that you really need a good source track to get the best out of this speaker. For example, with a quality stream from Tidal we were able to get real stereo effects from the Phantom Reactor on Queen's Bohemian Rhapsody, but on a low-quality stream it sounded like everything was coming from a single point source.

This is even more obvious when using the Reactor to watch movies. We tried a demonstration track of the movie Alpha and while the sound effects and soundtrack were beautifully rendered, the speaker was understandably lacking a little in terms of creating a sense of depth to match what was on screen. Of course, you don't get the Atmos effect of things flying around from above and behind you either.

We'd say you really need at least two units to get a good movie watching experience (and for true stereo sound), but that's where the lower pricing of the Phantom Reactors work to their advantage. For the price of one Silver Phantom, you can get two 600W Phantom Reactors, giving you a great setup for both movies and music.

It's arguably a lot easier to fit two Phantom Reactors into a regular-sized living room, than it is to fit even one of the Premier series Phantoms, so that's certainly something worth considering if you were thinking of getting a Phantom Premier to begin with. Ultimately, the Phantom Reactor affords you more choice while keeping the same full-bodied sound, and that's always a good thing.

Read Next 2: Re-engineering audio and what makes a Devialet speaker

Read Next 3: More about Devialet speakers