Note: This feature was first published on 8 December 2022. 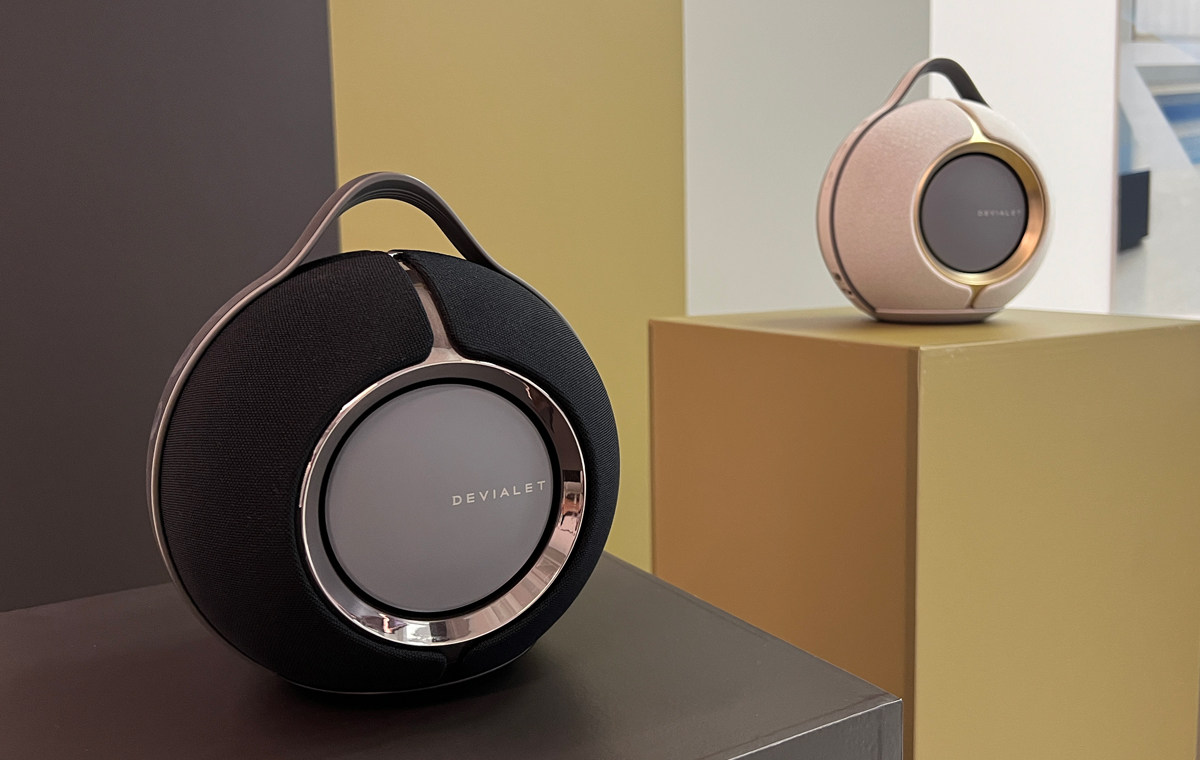 You probably heard about the Devialet Mania, which marks the French brand’s first-ever portable smart speaker, and probably also the first speaker to have the appearance of a kettlebell weight.

We’ve had the opportunity to try out the Mania prior to its official retail availability, and learn what the speaker offers beyond its luxurious and futuristic aesthetic.

Before we talk about its portable speaker, here’s a quick introduction to the brand: Devialet is best known for its Phantom standing speakers, which you’ll likely see mounted in boujee, sub-upscale bars around Singapore’s Central Business District. The brand is also known for its Dione soundbar, which comes with all sorts of technologies to heighten and refine listening experiences. How Devialet also stands out from the saturated audio market is through its premium material choice, eye-catching designs, and eye-popping price tags. 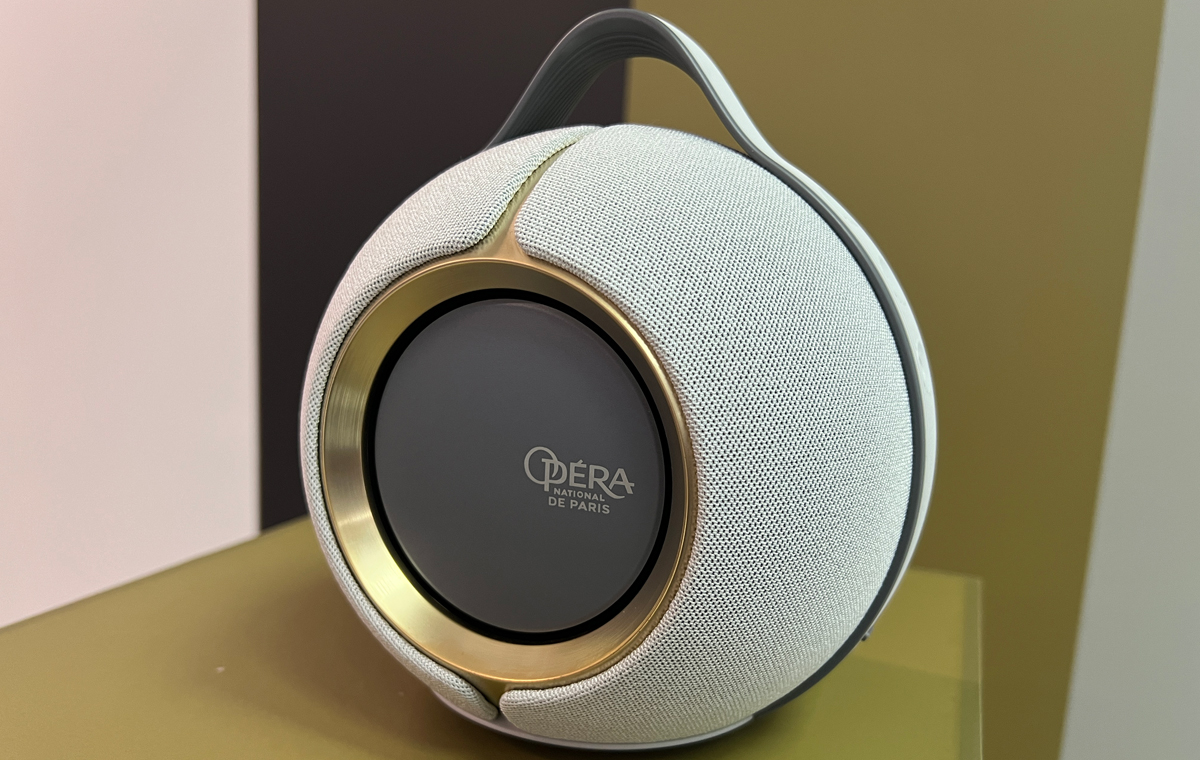 The Devialet Mania is no different in that regard. Sure, it may be its first-ever portable speaker, but the material choice, design, and price are just as overwhelming as their pricier audio counterparts.

We’ll start with our thoughts on Mania’s form factor and how it works. As mentioned, it has a shape of a kettlebell weight you’d typically find in a gymnasium, but it doesn’t just look quirky for the sake of it. Since it’s almost the size of an eight-pound bowling ball at 170mm and 2.3kg, the handle at the top plays a very important role in its portability around the house. It sounds heavy for a portable speaker too, but even that has a good reason behind it.

Hidden beneath its fabric-lined exterior are four 25W class-D full-range drivers, and the flat sides on both sides are its two 38W class-D woofers for bass. That’s plenty of drivers, even by portable speaker standards. 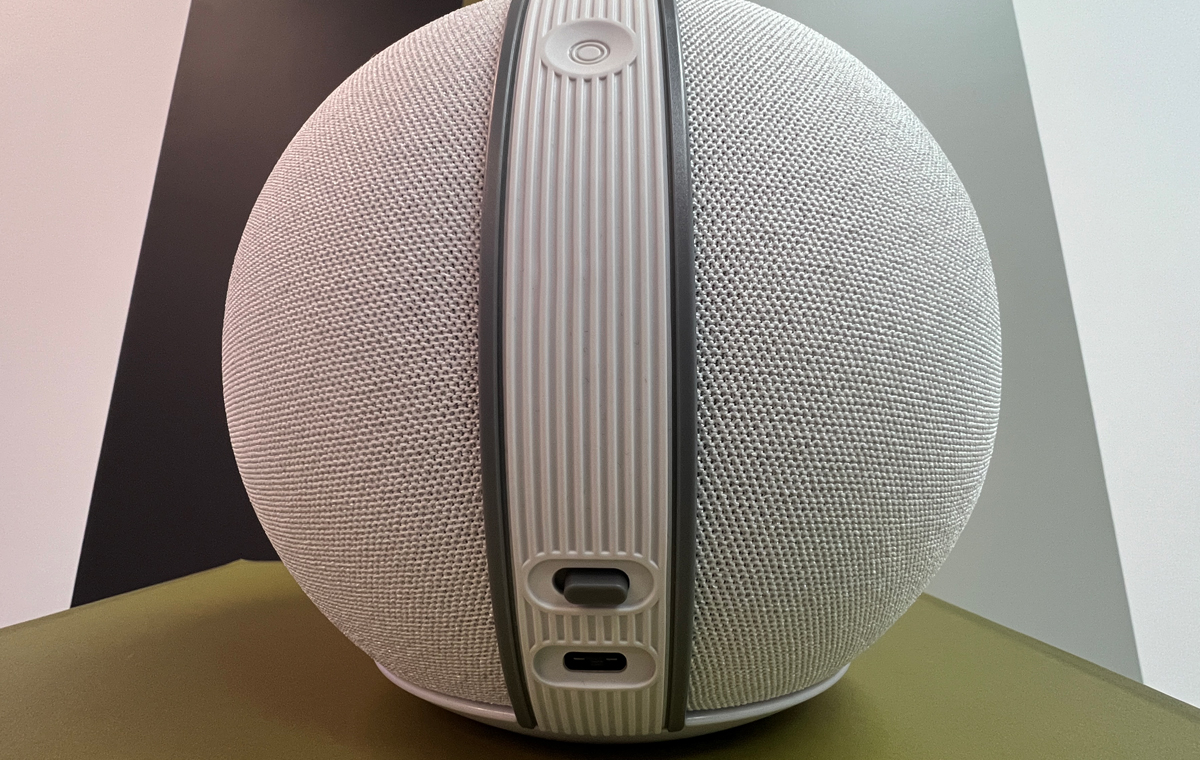 Its near-spherical shape also lends well to the Mania’s unique features and the main reason why anyone would want one – the speaker offers true 360° stereo sound with the ability to compensate for acoustic discrepancies through sound mapping. It’s not exactly new technology, but it’s rare for a portable speaker to offer real-time audio calibration since that’s typically reserved for high-end home systems.

In our demo, Devialet Mania’s Active Stereo Calibration (referred to as ASC) proved swift and accurate. Devialet said that it’s supposed to take at least five to ten seconds before the speaker recognises its environment and compensates its acoustics, but our attempts saw the Mania achieve that within five seconds. How ASC works is that the speaker detects if it has been moved near a wall, and the two nearest drivers facing the wall will reinforce the “front” facing ones by bouncing audio out and forward. In our minds, it feels like “autocorrect” for your speakers, if you care about good sound no matter where the speaker sits in the house.

Its sound signature is typical for a 360° stereo system, with a balanced emphasis across all ranges. Bass doesn’t overpower vocals, nor does vocals overshadow instruments, and so on. It’s a fairly neutral sound profile with great control, and average competencies at handling distortion and bleed. Despite its heft and weight, the Mania appears to have a narrow soundstage, making its 95dB max volume (within 1m) more suitable for bedroom or study room use if you want a compact listening experience. It can also be an ambience filler for larger living rooms and open-concept spaces.

The speaker’s primary sources are all wireless – its USB-C port on the side strictly accepts power supply and not data transfer, so you’re limited to Bluetooth 5.0 (AAC and SBC codec only), AirPlay 2, and Wi-Fi at 2.4GHz and 5GHz for transmitting audio from your source device. In our trials, Devialet availed only the Bluetooth option to us, so we had to rely on Spotify Premium streamed from a smartphone. Even then, the audio isn’t in a lossless digital format, which we felt was a missing component to an otherwise luxurious-looking speaker. 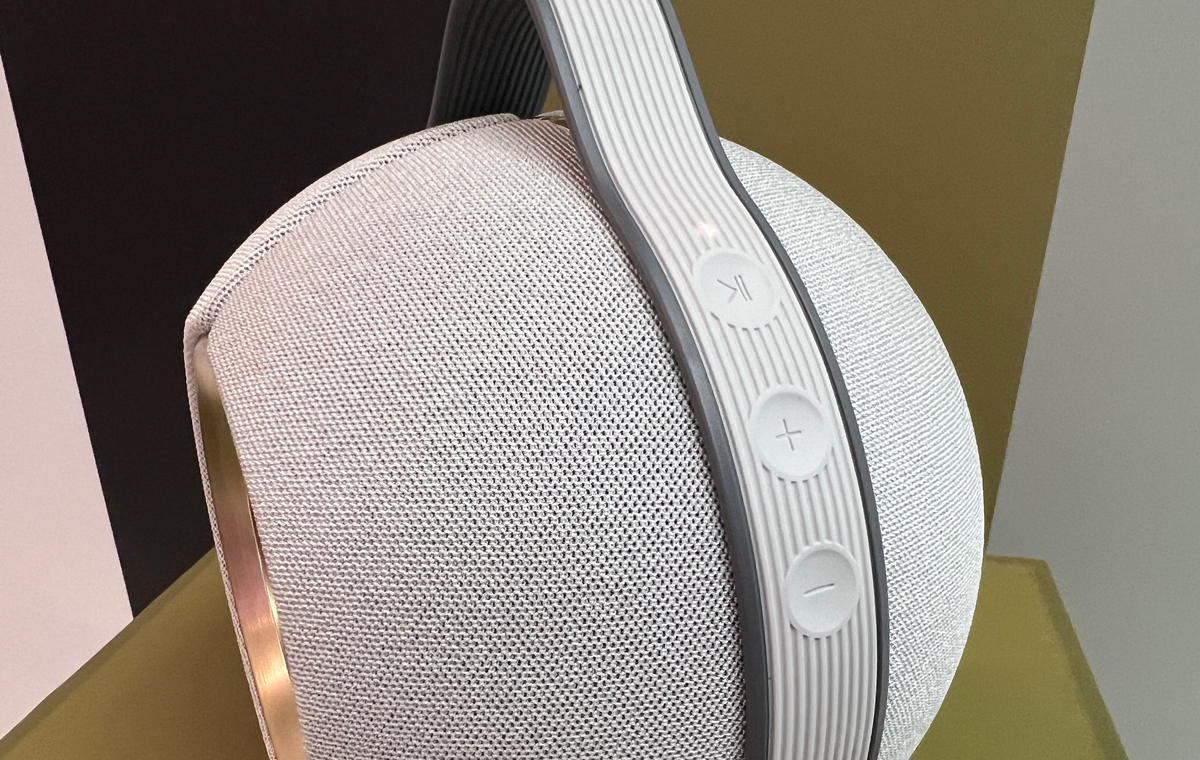 Controls on the Devialet Mania are simple, considering how it’s meant to be primarily controlled via your source device. On one side you get three playback options – play/pause, volume up, and volume down. The other side has a power button, a Bluetooth pairing toggle, and a button to check the Devialet Mania’s current battery levels. The speaker does have its own proprietary mobile app for further customisation, but we were trying the speakers out before its official release, so it’s not yet available to us at the time of publishing.

Other stuff we couldn’t try during the short demo were its IPX4 water resistance and its reported ten-hour battery life via its 3,200mAh battery. But that’s fine, because the Mania speakers survived a long day of testing by the time we got to it, and it’s not something you’d carelessly want to place next to a swimming pool.

The speakers do offer a refined package as a whole – that is, until you get to the charging dock that’s sold separately. One, it’s not exactly lowly priced (even if it’s relatively more affordable than Devialet’s Phantom products), so it was an odd decision to exclude the speaker’s charging dock from the Black and Grey versions of Mania. 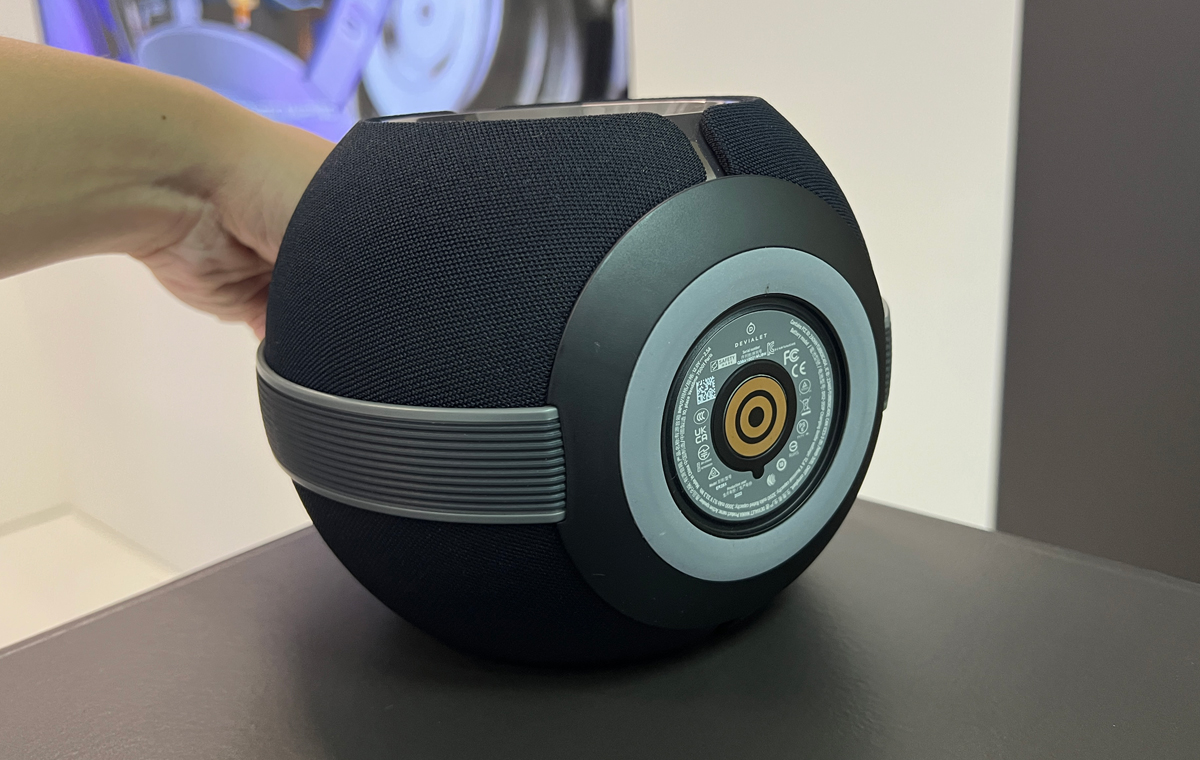 Second, would be the charging dock's relative lack of intuitiveness. Sure, you simply place the ball on the dock and hope that the charging contact points fit well, but there’s no tactile confirmation built into the speaker to ensure a solid connection. With Devialet’s attention to design, we felt like this was an uncharacteristic oversight.

That said, these little niggles don’t take away the shine of Devialet Mania’s overall value proposition. We still think you should get the Devialet Phantom or Phantom II if you want to experience what the brand is truly capable of. But, the Mania works as a very nice supplement to your personal audio needs, especially if you place great emphasis on ease of use and aesthetics. 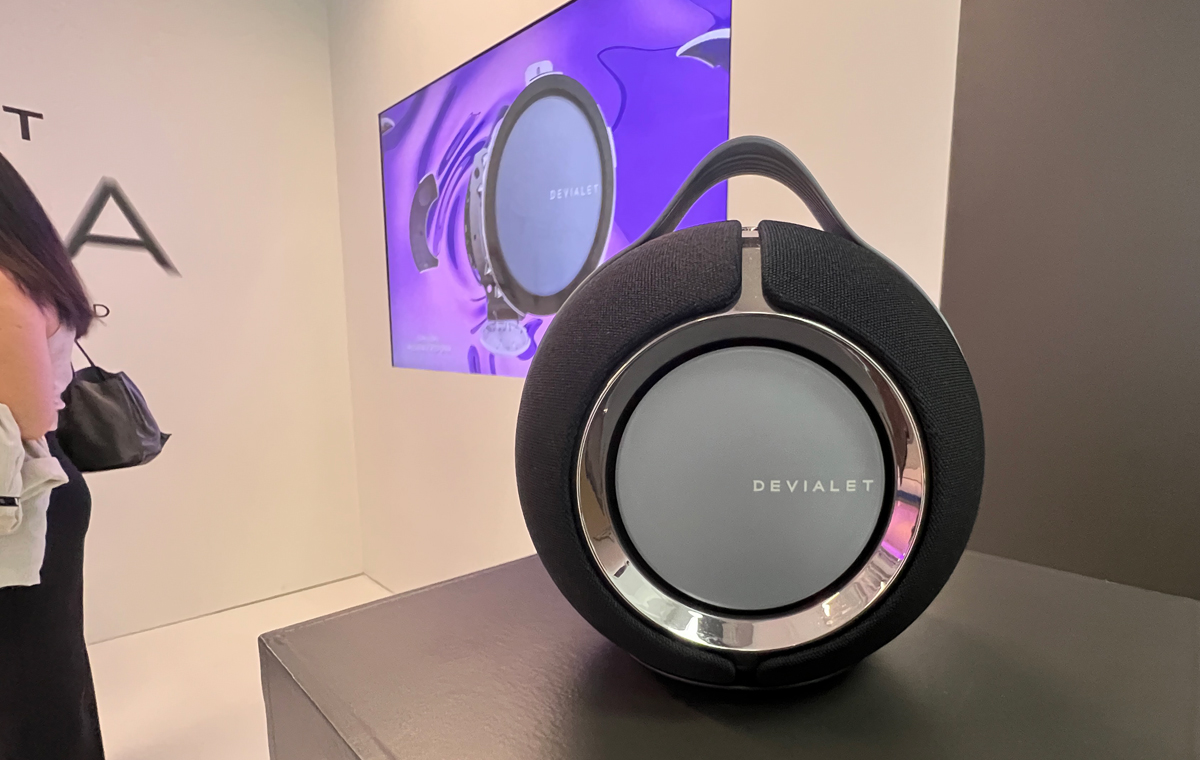 The Devialet Mania is now available at its official website and its physical retail stores in Singapore:

The speakers retail at S$1,360 in Black and Grey. Separately sold is a docking station for charging the Devialet Mania (S$129).

The Devialet Mania Opéra de Paris edition comes with the docking station, and it retails at S$1,760.