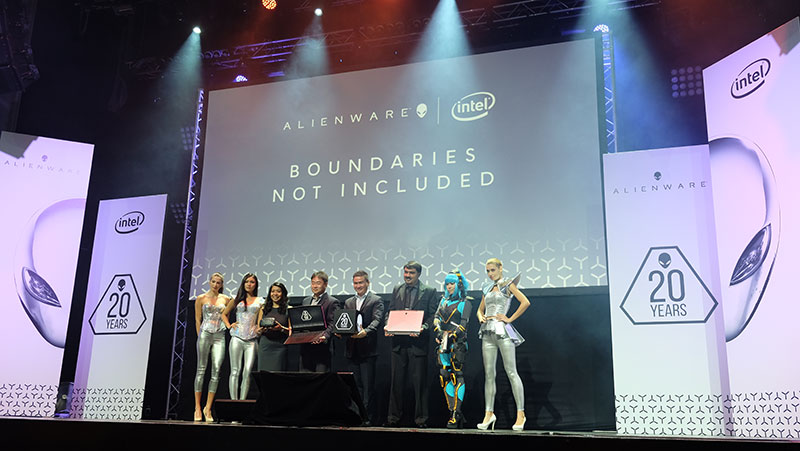 At an event yesterday at Club Millian at St. James Power Station, Dell took the opportunity to show off its latest Alienware gaming devices. The company also debuted its updated XPS 13 ultrabook, a new desktop, and a slew of refreshed Inspiron systems, but the star of the show was undoubtedly its flagship gaming brand with the distinctive alien logo.

The event was held to commemorate Alienware’s 20th year in making high-performance gaming systems, including classics like 1998’s Area-51 PC. Suffice to say, the brand has come a long way from the chunky Area-51m gaming laptop. The new Alienware 15 is among Alienware’s first ever VR-ready notebooks. The 15.6-inch machine is thinner than before, and uses lighter materials like anodized aluminum, magnesium alloy, and carbon fiber. It also features what Alienware calls a “hinge-forward” design – this creates a rear protrusion of sorts behind the notebook’s lid, but it does allow for improved heat dissipation as hot air can flow up and out the back. 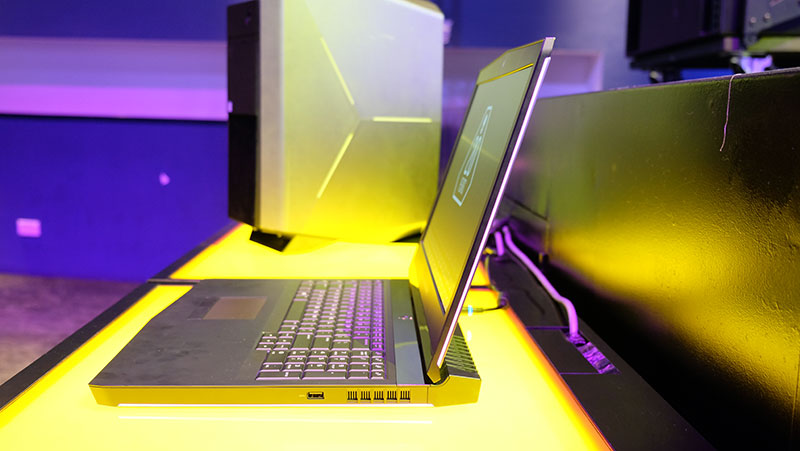 Other notable additions include the TactX keyboard, which boasts RGB LED lighting and a good 2.2mm of key travel for a better typing and gaming experience. Furthermore, because Alienware machines are typically designed with looks in mind, the notebook also has an anti-smudge finish to resist unseemly fingerprints.

It also has the hardware to back up its good looks, and you can get it with an overclockable Intel Core i7-6820HK processor, 32GB of DDR4 RAM, and a 180GB SSD and 1TB HDD. 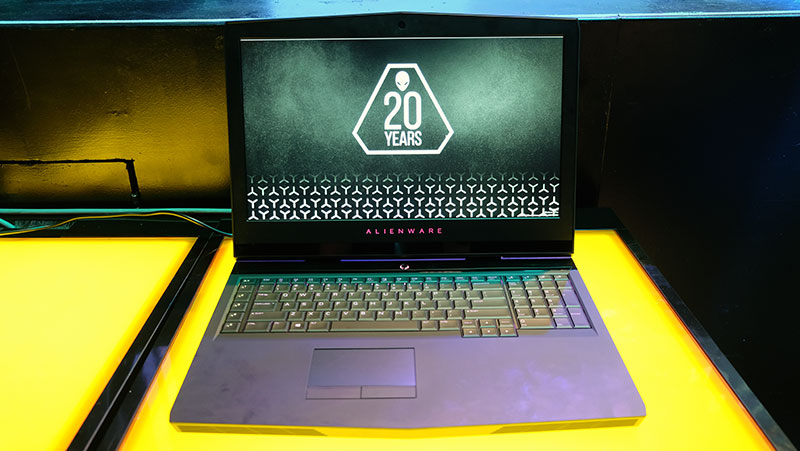 Another distinguishing feature of the 17-inch notebook is its support for Tobii eye-tracking technology, which allows you to do cool things like power the notebook up by simply looking at the Alienware logo. And if your gaze is fixed on the screen, the keyboard backlight will remain off to conserve power.

Both notebooks will hit retail shelves by the end of October. The Alienware 15 starts at S$2,399, while the Alienware 17 starts considerably higher at S$3,999. 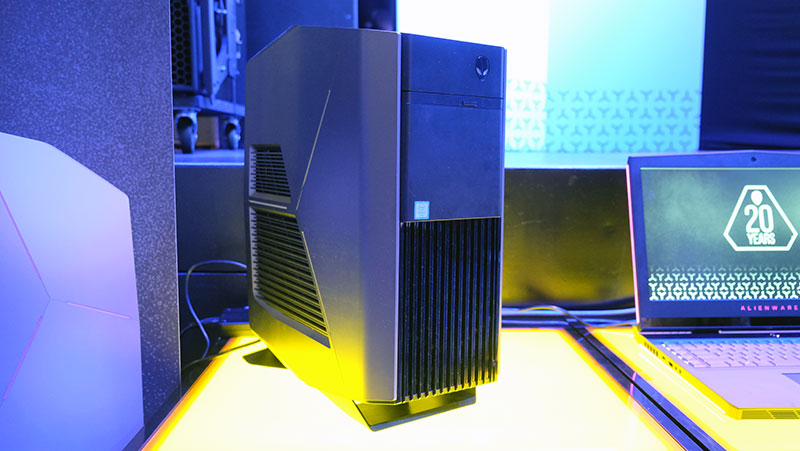 Alienware also showcased the Aurora, a mid-tower desktop PC that the company first launched back in June. It is smaller than the previous Aurora, but manages to pack even more graphics horsepower in the form of NVIDIA’s new Pascal cards. You can order one with dual NVIDIA GeForce GTX 1080 graphics cards in it, although we’re guessing that most people will go for something more sensible like a single GeForce GTX 1070.

Other hardware specifications include an Intel Core i7-6700 processor, up to 32GB of RAM, and a 512GB SSD and 1TB HDD. And if you so wish, you can get the Aurora with AIO liquid cooling for the CPU as well.

This is Alienware’s first chassis to allow tool-less access to the graphics cards and storage drives, which means that upgrading the system should be a breeze.

The Aurora is available now starting at S$2,199 with a sixth-generation Intel Core i5 processor, but it can go as high as S$4,999 with all the specifications maxed out. 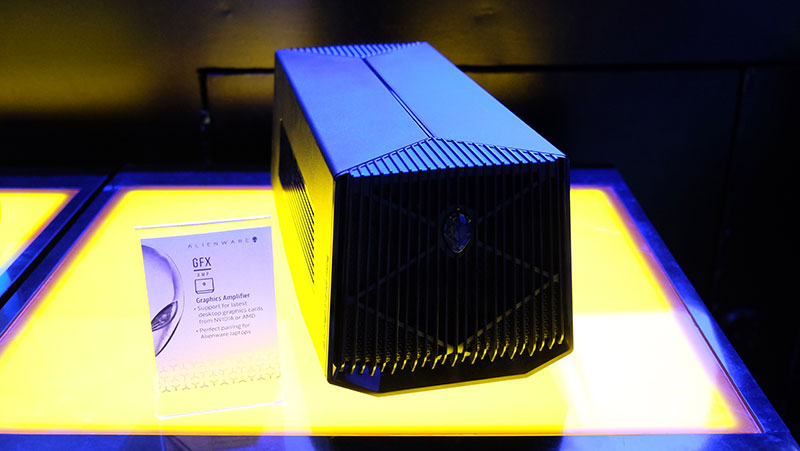 We also spotted the Alienware Graphics Amplifier on display. This will work with Alienware’s notebooks, and allows you to take advantage of the extra graphics processing heft provided by a full-fledged desktop GPU. Unlike the Razer Core dock however, it uses a proprietary connector, so you won't be able to use it with other notebooks.

You can get it at S$419 now. Take note that you'll have to supply your own graphics card. 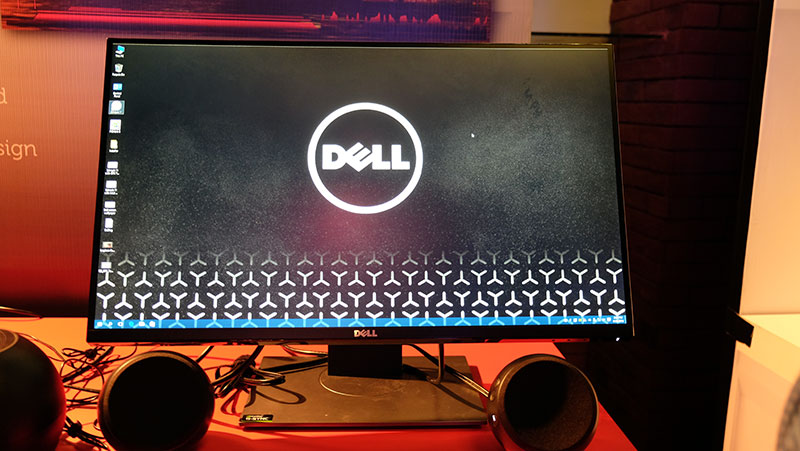 We were also treated to a look at the new Dell 27 Monitor. This 27-inch panel looks rather similar to Dell’s more staid InfinityEdge series of monitors, but with one key difference. It was designed expressly with gaming in mind, and boasts credentials like NVIDIA G-Sync support, a 144Hz refresh rate, and a 1ms response time.

It also features a 2,560 x 1,440-pixel TN panel, and the QHD resolution is pretty much in line with the majority of 27-inch gaming monitors on the market today.

Dell has also thought to include a range of connectivity ports, including four USB 3.0 ports, 1 audio line-out, and a headphone port. However, it is lacking a DVI port, and you’ll have to choose between an HDMI 1.4 connector and a DisplayPort 1.2 port.