Note: This article was first published on 24th May 2021 and republished now as the sales are now live. Shopee will be holding a Tech Sale Bonanza from 27 to 30 May. We decided to comb through some of their offerings and see what deals there were.

Shopee will be having themed sales spread over the four days, a Mobile & Gadgets Day on 27 May at up to 90% off, a Computers & Games Day on 28 May where you can grab a Nintendo Switch, a Home Appliances Day on 29 May with up to 70% off your home needs, and an Ultimate Grand Finale Sale on 30 May for huge savings on popular brands including Samsung, JBL, Acer, Logitech, KitchenAid, and more.

You can also grab up to S$120 off flash vouchers and limited-time deals, released at 12am, 12pm and 10pm daily for further savings. Think you’re a tech whizz? Head over to the Super Tech Show daily from 27 to 29 May to decipher the code and unlock an exclusive S$50 (with no minimum spend) vouchers to be used during the Ultimate Grand Finale Sale. If you can’t crack the code, you can still join in Shopee’s lucky draw giveaway by following the Shopee Tech Feed where every S$50 spent at the show earns you a chance to win a PlayStation 5 worth S$729. 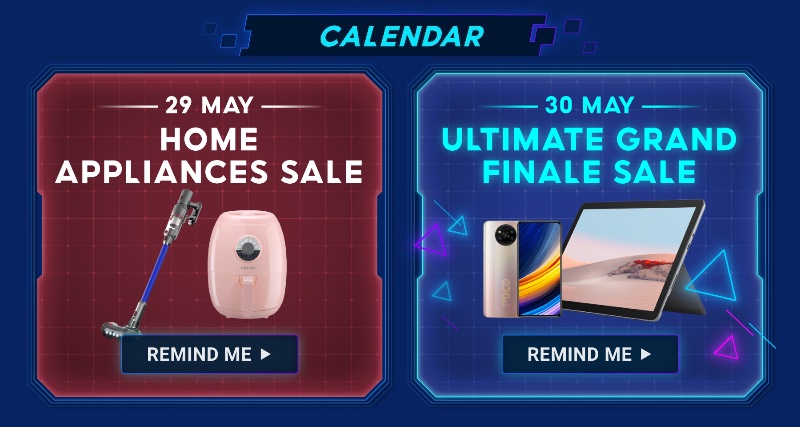 HardwareZone readers also have an exclusive discount code. Enter the code HWZSTSMAY to enjoy 10% off capped at a maximum of S$10. Terms and condition apply.