Just weeks ago, we reviewed the top drives from last year in our Great High-end SSD Shootout (2014 Edition). Although the Crucial M500 did not fare too well, we must remember that despite being Crucial’s flagship SSD, it is actually positioned as a mainstream SSD and was not intended to go head to head with the likes of Samsung’s fearsome SSD 840 Pro and OCZ’s blazing quick Vector 150. So this time, we are pitting it against something more apt. 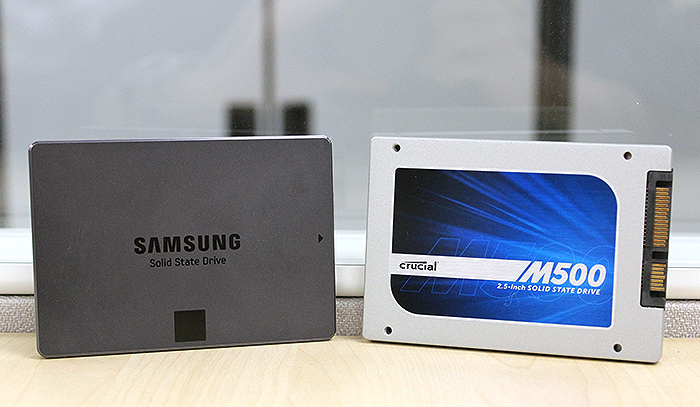 Enter Samsung’s new SSD 840 EVO, successor to the older SSD 840. Like its predecessor, the SSD 840 EVO continues to employ the use of Triple-Level-Cell (TLC) NAND, and remains to be the only major SSD manufacturer to do so in the consumer SSD space. Samsung has also shifted to a smaller 19nm manufacturing process - previously it was 21nm. Finally, the SSD 840 EVO also gets an updated controller. Dubbed the MEX, the underlying architecture of the controller is identical to the old MDX found on the SSD 840 Pro, but benefits from faster running cores that operate at 400MHz as opposed to 300MHz in the MDX.

The SSD 840 EVO also employs two new Samsung technologies to boost its performance: TurboWrite and RAPID. TurboWrite dedicates a small portion of its TLC NAND to work as an SLC write buffer, which is unlike SanDisk’s nCache technology. RAPID, on the other hand, is a caching technology that was introduced in the middle of last year to boost random I/O performance with smaller size data at low queue depths. Essentially, it makes use of unallocated system memory and spare CPU cycles to cache data and boost performance.

The use of TLC NAND is interesting and Samsung believes that this is the most viable solution for bringing the cost of drives down in the future. As its name suggest, TLC NAND stores three bits per cell (eight voltage states) as compared to MLC’s two bits per cell (four voltage states) and SLC’s single bit per cell (two voltage states). What this means is that with TLC NAND, more dies can be harvested from a single wafer and this reduces manufacturing costs.

However, you cannot have your cake and eat it, and there are some downsides to TLC NAND and the two most pressing are performance and endurance. With eight voltage states to check, random reads will take more time - roughly twice as long as MLC NAND (theoretically speaking). Endurance is affected because having additional voltage stages reduces the margin between the individual stages, and this is crucial because as you write to the cell, the layer of silicon oxide that acts as an insulator gradually wears out. When it does, higher voltages will be needed to program the cell to one of its eight states, which further reduces the margin between them. Gradually, the margin will be so small that the cell can no longer be effectively used and has to be retired. Anandtech has a more detailed explanation that you can read up here. Therefore, while MLC NAND SSDs are typically good for 3000 P/E (program-erase) cycles, expect TLC NAND SSDs to enjoy less perhaps as little as 1000. 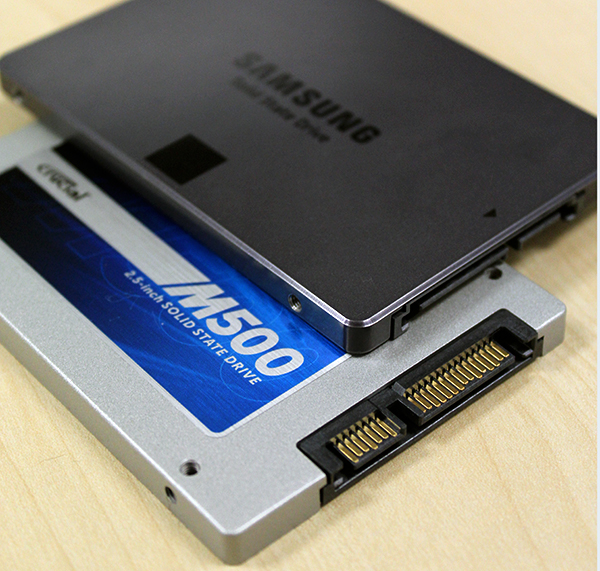 This is where the Crucial M500 comes in. As the consumer arm of Micron, one of the world’s largest manufacturer of NAND memory, they believe that smaller manufacturing processes coupled with larger page and block sizes is the way forwards. As a result, Micron’s latest NAND die packs a maximum capacity of 128Gbits or 16GB per die. While that might be the same as Samsung’s solution, Micron’s NAND has a larger 16KB page size which may negatively affect latency. On the other hand, since it is still MLC NAND, endurance has not been adversely affected and the M500 is rated for up to 3000 P/E cycles, the same as other MLC NAND SSDs.

As you can see, while the two drives are targeted squarely at mainstream users, the ideology and strategy behind the two are markedly different.