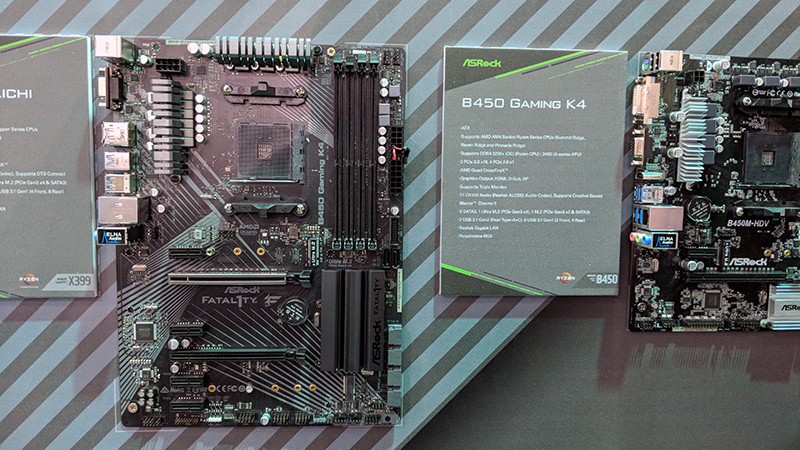 The ASRock B450 Gaming K4 is a fairly standard ATX gaming motherboard with ASRock's Polychrome RGB lighting. It features a nine-phase VRM and a single 8-pin CPU connector, in addition to support for up to DDR4-3200 memory via overclocking. The board is also equipped with two PCIe 3.0 x16 slots and four PCIe 2.0 x1 slots, paving the way for an AMD Quad CrossFireX configuration.

And even if you choose to go with one of AMD's Raven Ridge APUs, it will support triple-monitor output with its onboard HDMI, D-Sub, and DisplayPort connectors. On the rear I/O, you also get two USB 3.1 (Gen 2) connectors (one Type-A, one Type-C) and four USB 3.1 (Gen 1) ports.

Finally, its storage options comprise a total of six SATA 6Gbps ports and two M.2 sockets (one supports PCIe 3.0 x4 drives, while the other supports both SATA and PCIe devices). 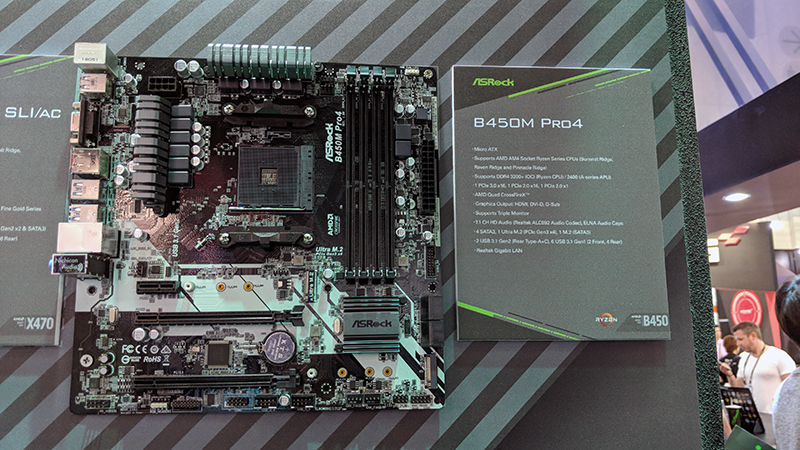 The ASRock B450M Pro4 is a micro-ATX board targeted at small system builders. It features a nine-phase VRM and supports up to DDR4-3200 memory if you're running it with a Summit Ridge or Pinnacle Ridge processor. 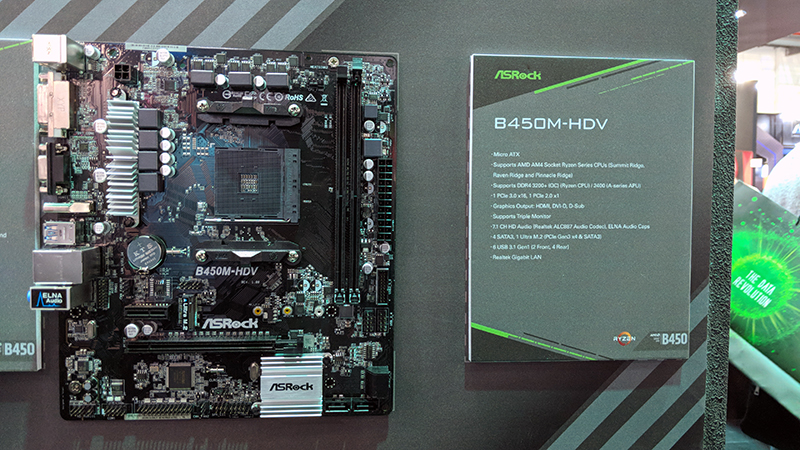 The ASRock B450M-HDV micro-ATX motherboard is a slightly more pared-down version of the B450M Pro4. It features just a seven-phase VRM compared to the latter's nine, and is equipped with a 4-pin EPS connector and two DDR4 memory slots.

Expansion options are more limited as well, with just a PCIe 3.0 x16 and PCIe 2.0 x1 slot and no support for AMD Quad CrossFireX. It still supports a triple-monitor setup however, and you'll find HDMI, DVI-D, and
D-Sub outputs at the rear. That said, USB 3.1 (Gen 2) support is missing, and the rear I/O features just four USB 3.1 (Gen 1) connectors.

For storage expansion, you get just four SATA 6Gbps connectors and just one M.2 socket that supports both PCIe and SATA drives. The audio solution also differs from the previous boards, and the B450M-HDV uses a Realtek ALC887 audio codec instead of the ALC892 on the Gaming K4 and Pro4 boards. 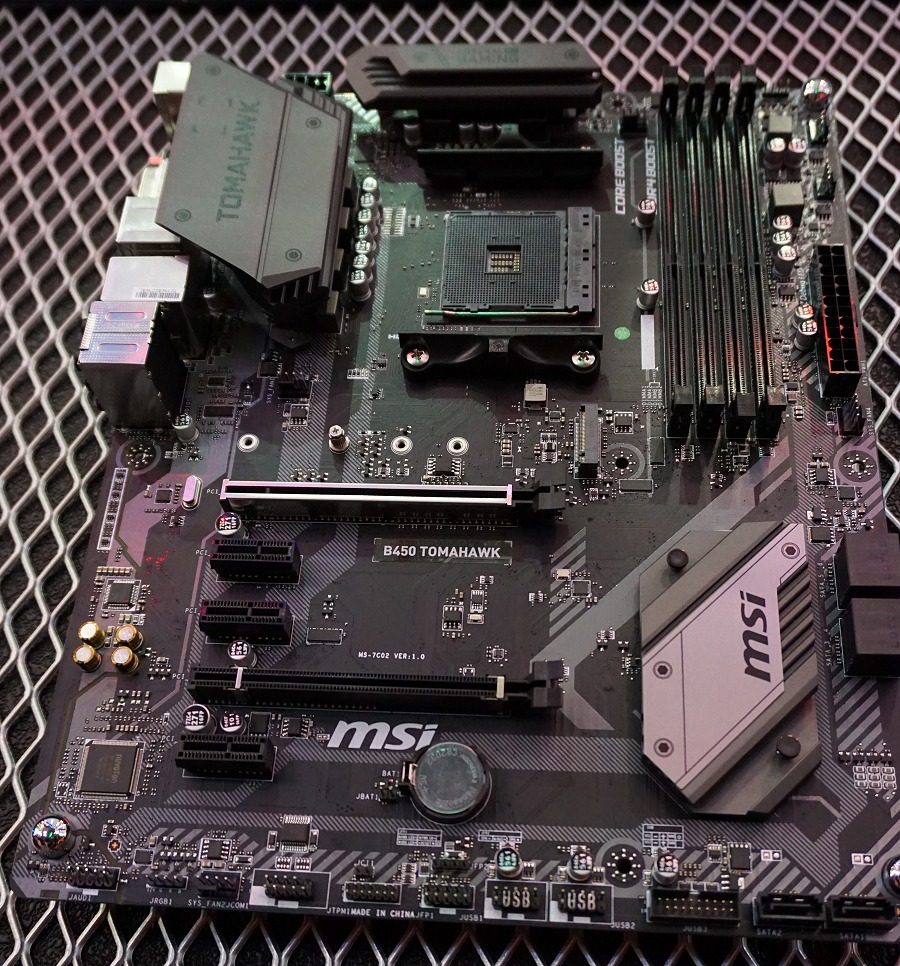 MSI too was ready for Ryzen 2 with AMD B450 motherboards. The most prominent model in their line-up is the B450 Tomahawk, which is halfway between the mainstream and enthusiast series. Although it has 'only' dual x16 PEG slots (only one of which is PCIe 3.0 capable), a single M.2 slot and six SATA ports,  it has a few comfort features such as BIOS Flashback for easy BIOS upgrading that doesn't even require the processor. But its star feature is the new extended heatsink design that overhangs above the VRM components. MSI claims the 26% larger heatsink can help lower VRM temperatures by up to 10 degrees Celsius. 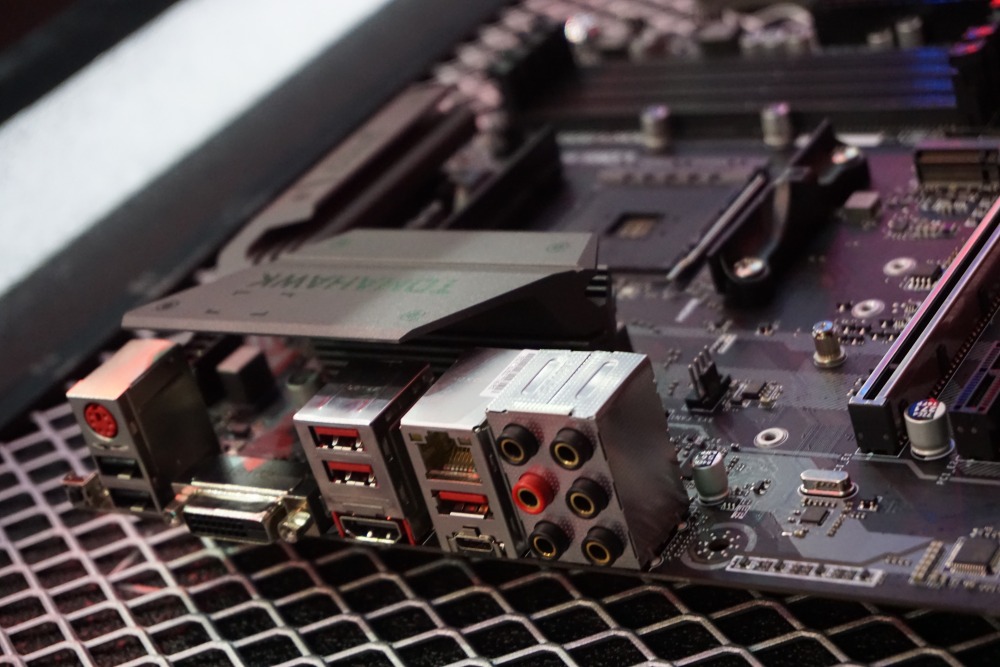 We were also lucky to spot an MSI Z370 Gaming Pro Carbon motherboard paired with the rare and just announced special edition Intel 8086K processor - the first consumer processor that can Turbo Boost to 5GHz as an official spec:- 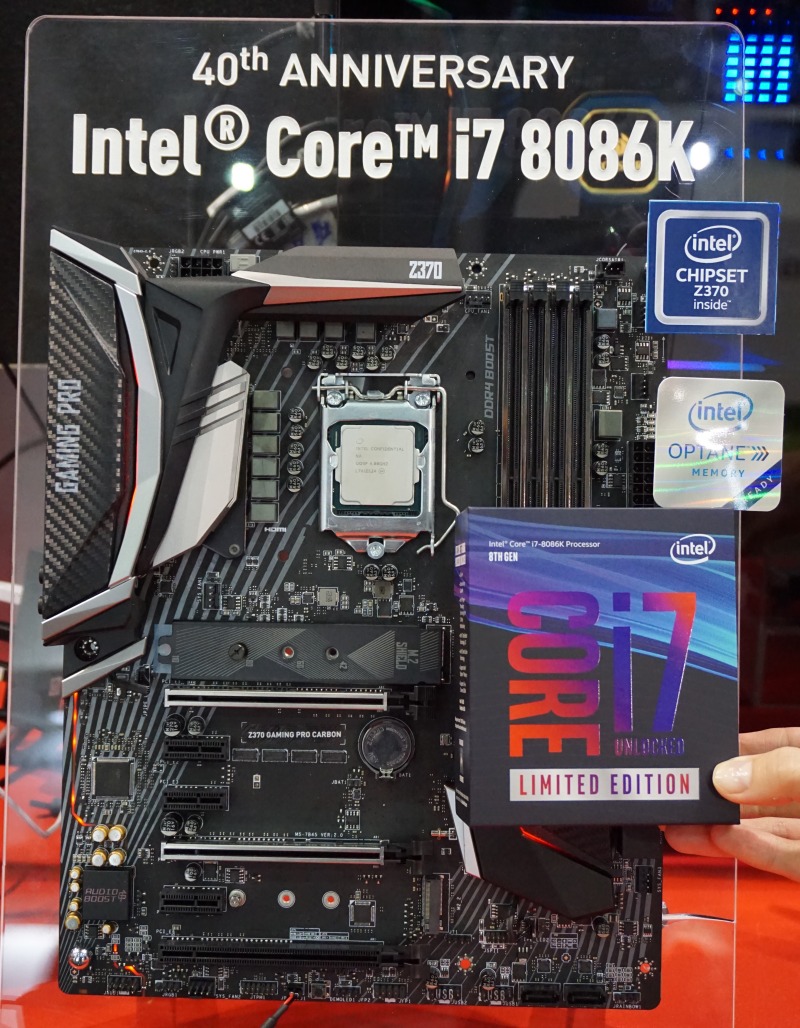 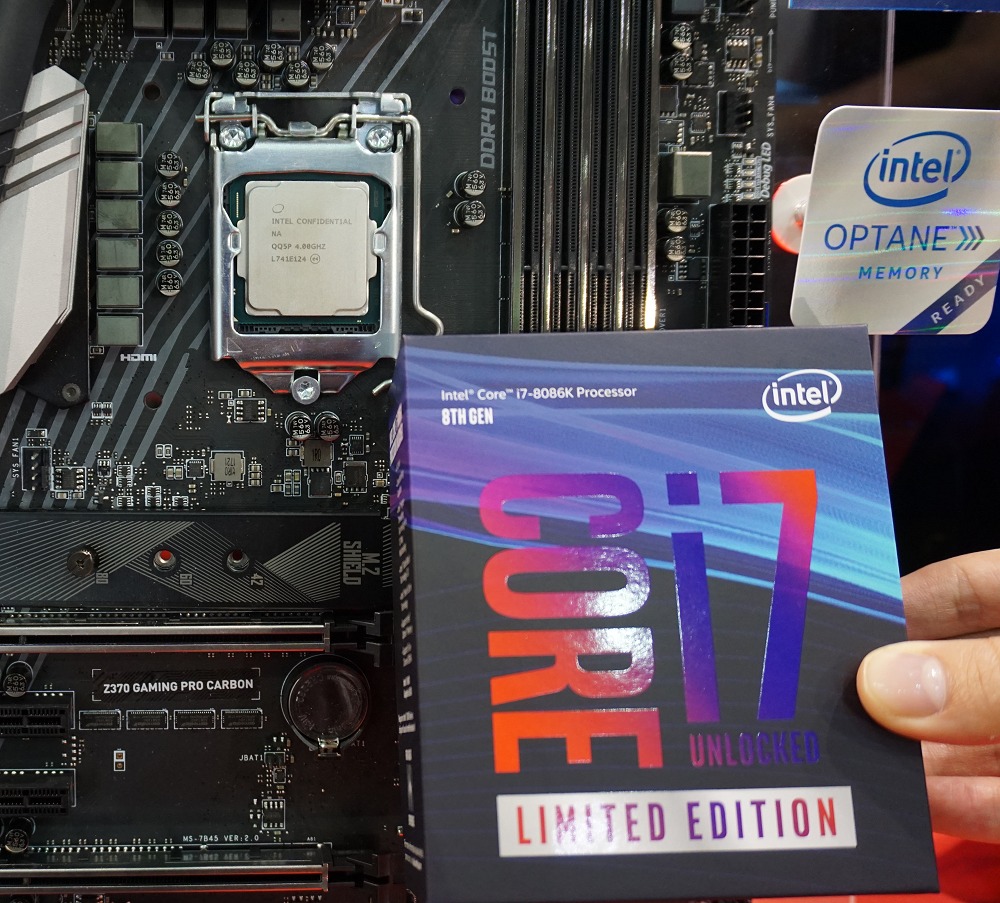 Last but not least, MSI has expanded its range of Arctic-themed motherboard options to cater to a wider budget range. It will also be easier to flaunt it with the increasing number of casings with transparent side panel options:- 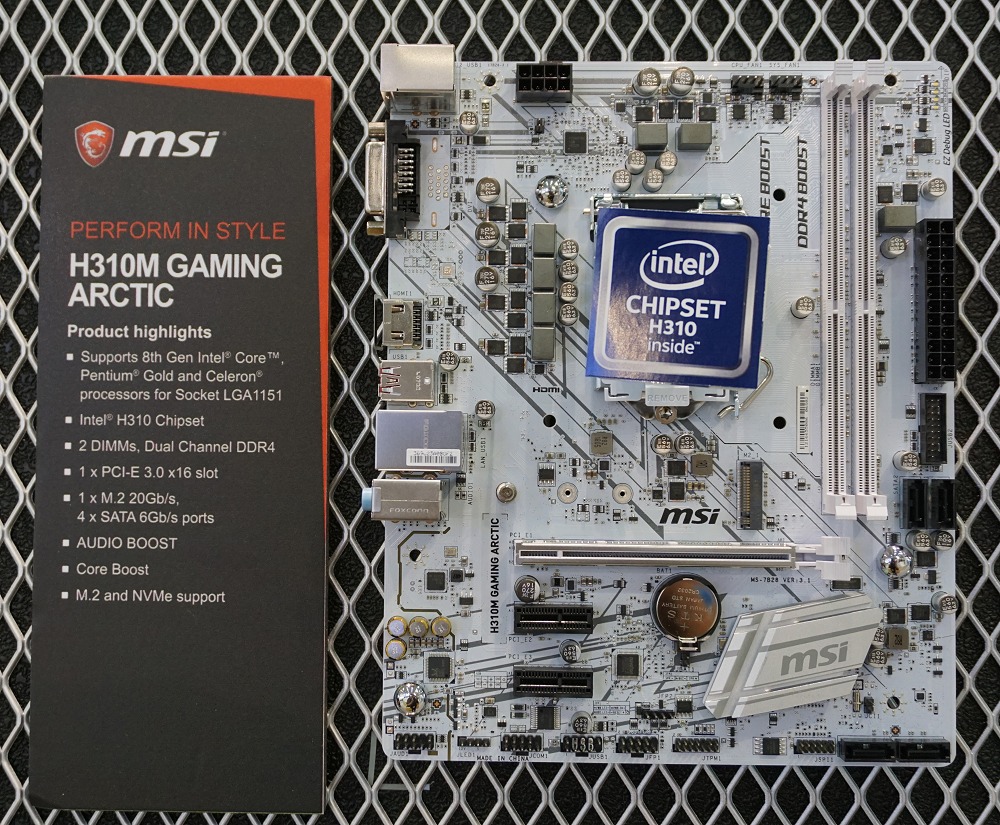 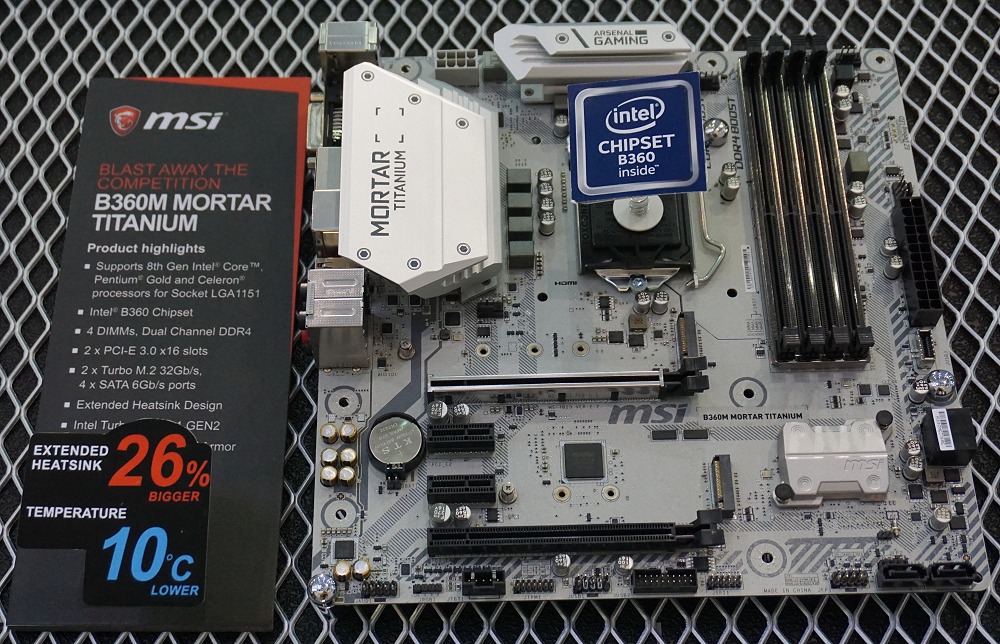 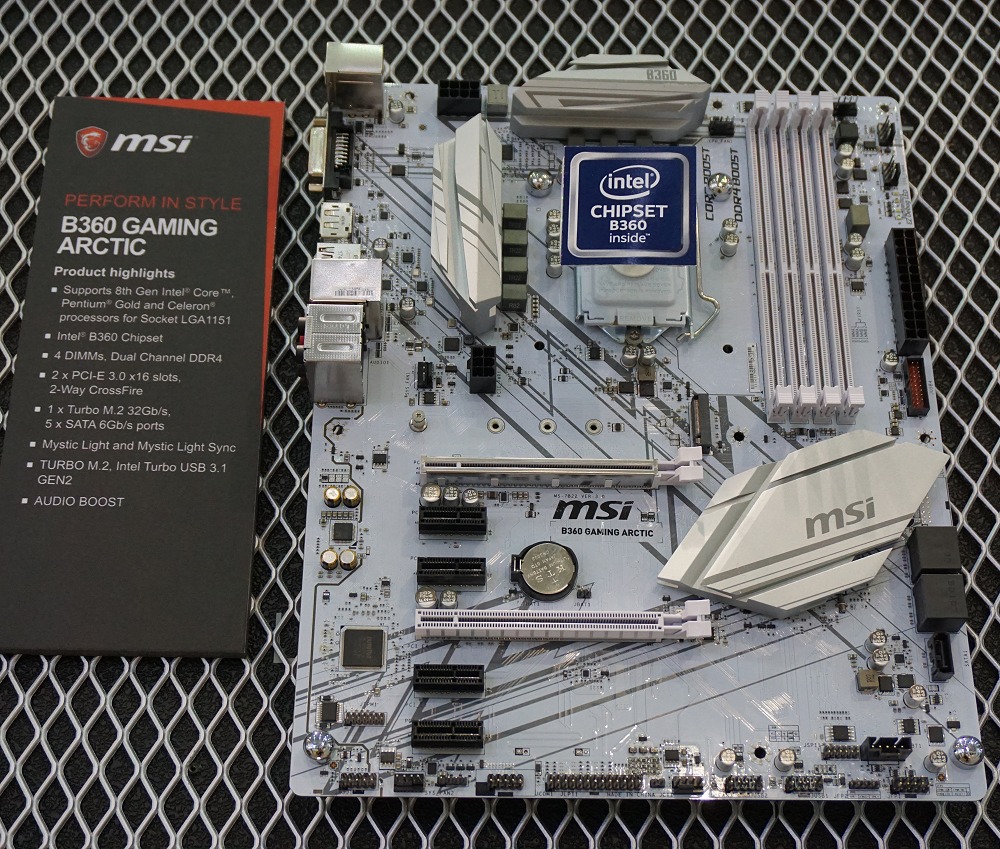