Intel Poised and Ready for the Near Future

By far, Intel probably hogged the most time and space at Computex 2009. Not that there's anything wrong, but were surprised how much they are looking forward to shaping the next generation desktop, mobile and even handheld space with their solutions in this time of economic downturn. However that's exactly the right thing to do when you can afford to do so because once the economy turns around, you would want to be there with your solutions when the uptake comes knocking around the corner. With that said, we'll step you through what you can expect in the near future starting from the performance desktop space.

Besides just launching two new Core i7 processors, the i7-975 Extreme Edition and the i7-950 for the enthusiast segment on the existing Intel X58 chipset, Intel shared with the media on some of the salient points of the upcoming Lynnfield processors that's set to replace the Core 2 Quad processors in September this year. Lynnfield is also commonly known as the Core i5 processor in the tech circles, but Intel strongly claims that it won't be bearing that name (sad though since it's so befitting the series and chronology).

Lynnfield will be a 45nm quad-core, eight-thread processing CPU (and that means HyperThreading is available on this series too). But instead of the extreme nature of the Core i7 processor built for workstation-like performance, Lynnfield would feature a dual-channel memory controller with not as extreme clock speeds (by contrast, the Core i7 series has a tri-channel memory controller).

However the highlight of the Lynnfield processor is in our opinion of its clever power and performance management via a more advanced power control unit (PCU for short) than on the current Intel Core i7 processor. At the moment, the Core i7 is able to kick up one or two multipliers as part of its Turbo Boost function when the application being run isn't able to take advantage all of the four cores.

Come Lynnfield, you're going to see a far more dynamic architecture where depending on the threaded nature of the application, you'll get more performance out of the processor's multiple cores, or much higher clock speeds on less threaded applications. The limit on how high a frequency it can tune itself up is not yet concretely revealed, but it is generally governed by the processor's TDP spec and the processor will be clever enough to notch itself up or down with regards to power required. 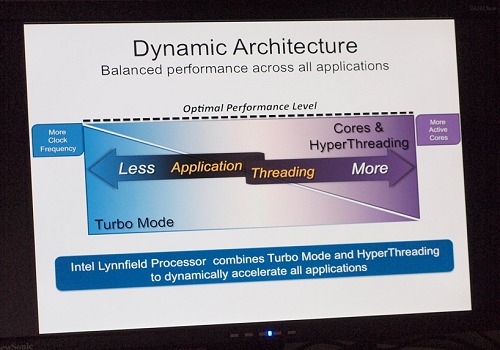 Robert Crooke, General Manager of Business Client Group at Intel who introduced this Lynnfield's capabilities did mention an example where a 2.93GHz Lynnfield processor can go as high as up to 3.6GHz depending on how lightly threaded the application is and within the TDP of the processor. This amount of frequency scaling is definitely many bins more than the Core i7's Turbo Boost function. Plus the fact that there's no fixed scaling function and is instead controlled by Lynnfield's PCU to determine how best to optimize the CPU's resources within the TDP rating ensures good performance throughput across a variety of applications (be it gaming or digital media creation). 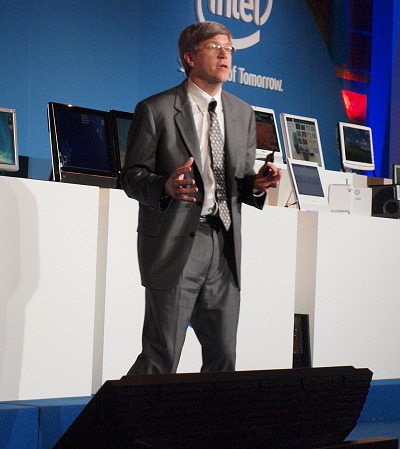 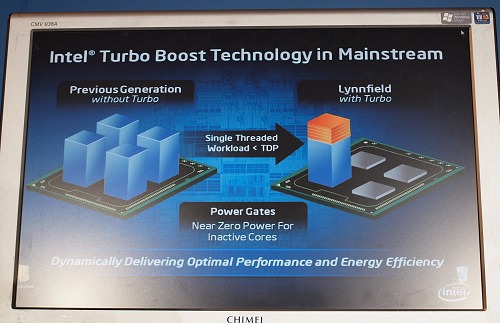 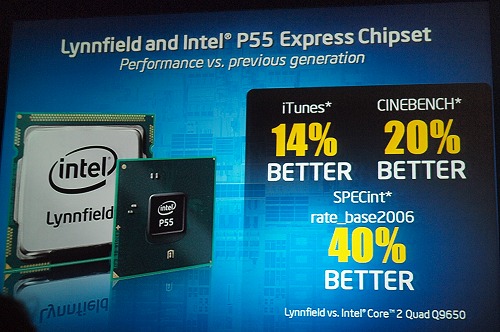