A Closer Look at Internet Explorer 11

A Closer Look at Internet Explorer 11 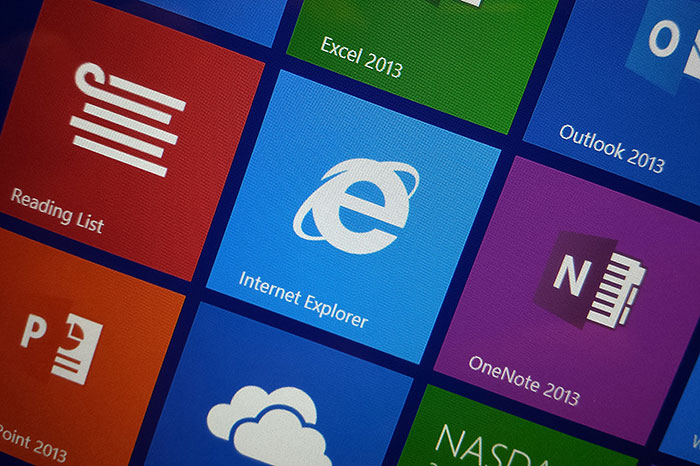 On Windows 8, the Modern Start screen is populated with app tiles, and many of them are ‘live’ tiles, which means they serve up useful information in real time. Site tiles can also be pinned to the Start screen, but they are static tiles. For IE11 on Windows 8.1, a website pinned to the Start screen can now be a live tile too, refreshing and displaying data from the site. A pinned site tile can even notify a user outside of IE11. For sites with a web feed, this notification function can be automatically built into the tile. To build a site tile, you can go to Build My Pinned Site. 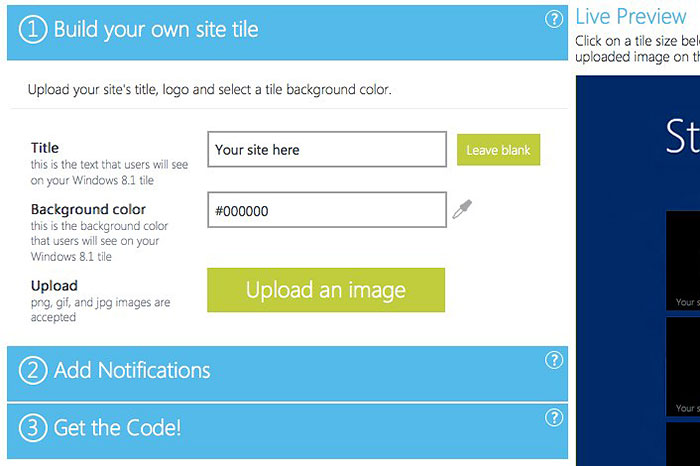 IE10 focused a lot on touch performance, and IE11 is even more so. On the UI front, tabs have moved to the bottom, sitting right above the address bar. The way to add a site to your favorites has changed too. In IE10, you tap on the pin button beside the address bar, and a menu that lets you pin the site to the Start screen or add it to the favorites will pop up. Now this pin icon has changed to a star icon, and tapping it will reveal the Favorites bar with two icons at the right that do the above-mentioned functions. And speaking of favorites, IE11 has support for folders and custom tile pictures. And they will sync with the desktop and across your other Windows 8.1 devices.

‘Flip ahead’ (a feature that lets you swipe across the screen to advance to the next page in a multi-page article, and is present in IE10) now works better. In addition to more clever page prediction, IE11 now does pre-fetching and pre-rendering for up to two links in the background. So when you swipe to go back or go to the next page, there’s very little delay.

Touch hover menu support is also something new in IE11. Essentially, what it does is to enable a hover menu to stay opened (instead of going away) when you lift the finger. It works for tooltip text too, which usually requires a cursor to hover over an item (e.g. an image) for the text to appear. Also, drag and drop using touch now works on IE11. There’s nothing fancy that web developers need to do other than to write using HTML5’s drag and drop standard. 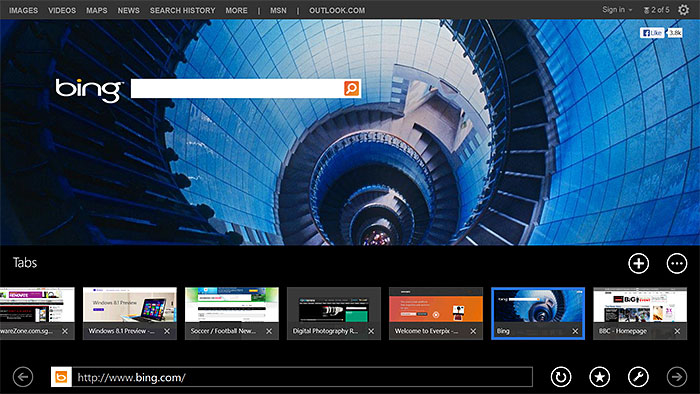 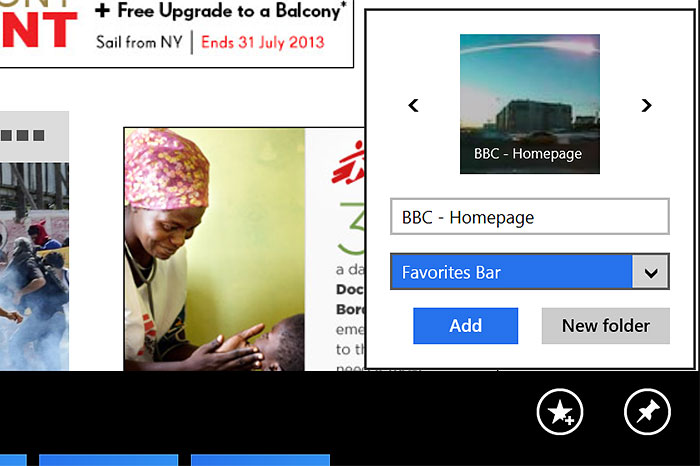 In Windows 8.1, Bing is not just a web search engine, but is built directly into the OS. And you can see this in action in IE11’s address bar. Besides giving you suggestions based of previously visited sites as you type (this is dynamic, as it’s based on factors such as frequency and recency, not just of the in-use device, but your other devices too), it’ll suggest direct links to site sections, those from Bing search, as well as Windows Store app suggestions. It can even give you answers for weather and stock prices. It’d be great if unit conversion can also be done. Hopefully, that would be in the final release. 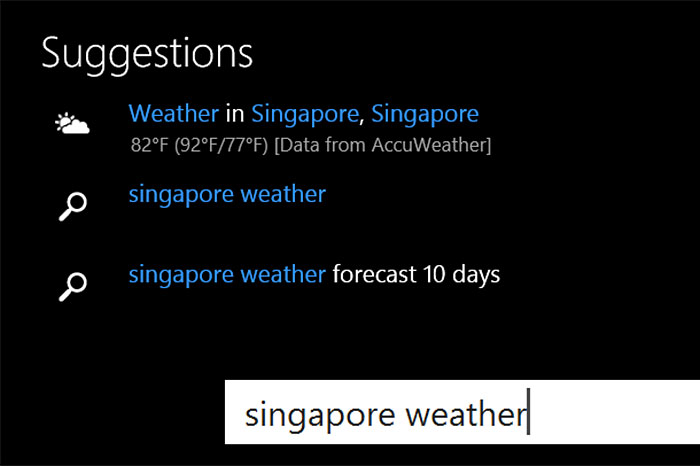 Offloading Tasks to the GPU; Up to 100 Tabs Per Window

To improve touch responsiveness and battery life, IE11 uses the GPU to process gestures like swiping, panning, and zooming of images. The whole JPEG image decoding pipeline is also offloaded to the GPU. All these allow the CPU to work on the more important tasks and also enhances battery life.

It’s also worth noting IE11 allows up to 100 tabs per window, as opposed to 10 in IE10. To prevent resource drain, it does independent tab suspension. And don’t worry, kick-starting a suspended tab is also very quick. Also, when you open a new window, either from a link in Mail or via the context menu in IE11, the second window will automatically snap side by side with the first.

In addition, IE11 supports roaming of opened tabs. Powered by SkyDrive, this ensures that your tabs stay in sync across devices. But it’s not just tabs - it also works for favorites, history, user names and passwords. Unfortunately and frustratingly, tabs still don’t sync between Modern IE11 and desktop IE11. 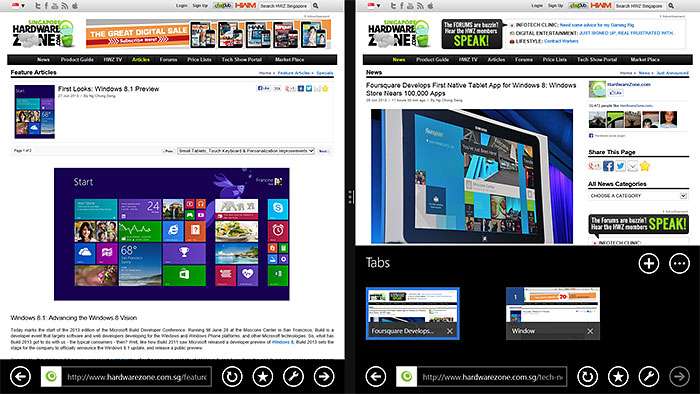 IE11 fully supports HTML5 video. This allows direct playback of video in the browser without using plugins like Silverlight. And if you’re a Netflix subscriber and have installed Windows 8.1 Preview, you can see this in action right now by going to Netflix.com in IE11. To cut the long story short, Microsoft has implemented the Media Source Extensions (MSE) and Encrypted Media Extensions (EME). And for encrypting/decrypting communications between Netflix's JavaScript app and its servers, Microsoft has implemented the Web Cryptography API (WebCrypto). You can find out more about these 'HTML5 Premium Video Extensions' in this Netflix announcement. In our experience, it worked well, though sometimes, after we paused and then resumed playback, the image would turn black, even though the audio continued just fine. 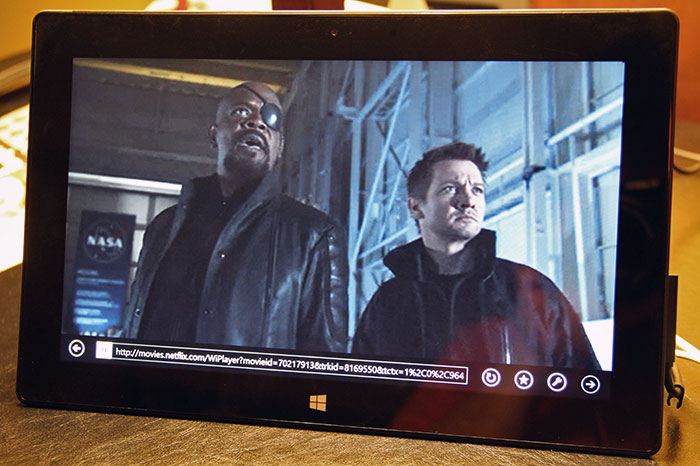 In addition, IE11 supports WebGL and GPU-accelerated 3D web graphics. IE11 has finally gotten onboard WebGL (after Firefox, Chrome, Safari, and Opera) as Microsoft deems the standard as being more secure now. (This is in reference to a previous exploit found in Firefox for Mac that allowed hackers to see the user’s screen.) With the inclusion of CORS (Cross-Origin Resource Sharing) in the WebGL specification, and mechanisms like TDR (Time-Out Detection and Recovery), Microsoft feels that the time is ripe.

Microsoft didn’t shout about this, but IE11 also supports SPDY/3, a networking protocol developed by Google that aims to speed up webpage load time. But WebRTC (which enables in-browser voice calling/video chat without plugins) is nowhere to be found. Perhaps Microsoft is in no hurry to support that, since it has Skype.

If you’re a web developer, be sure to check out the new F12 developer tools in IE11, which before this has remained unchanged since IE8. Also, modern.IE helps you with cross-browser checking, and even addresses common problems that arise from supporting older versions of IE. 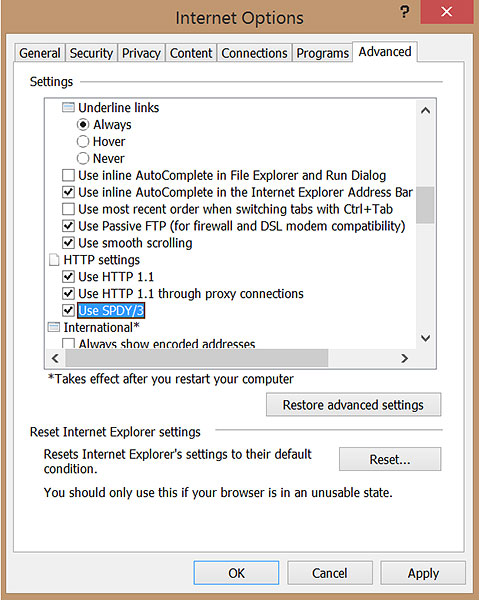 Microsoft has created a video pitting IE11’s hardware-accelerated HTML5 performance against Chrome using a Lawn Mark benchmark that you can find at the IE Test Drive site, and it's not hard to guess who's the winner. In short, Chrome lost because it had to do a lot of computation. We’ve embedded the video below.

For those interested, you can also try the Levitation demo. Firefox seems to be very poor at handling touch. There are also several more HTML5, graphics, and Windows 8.1 demos at the IE11 Test Drive site.

While IE11 doesn’t look very different from IE10 at first glance, when you delve deeper, you’ll notice that there are many changes. While the examples above use Modern IE11, most of them are applicable to desktop IE11. After all, both use the same IE engine. So, if you’ve downloaded Windows 8.1 Preview, before downloading another browser, why not give IE11 Preview a shot? 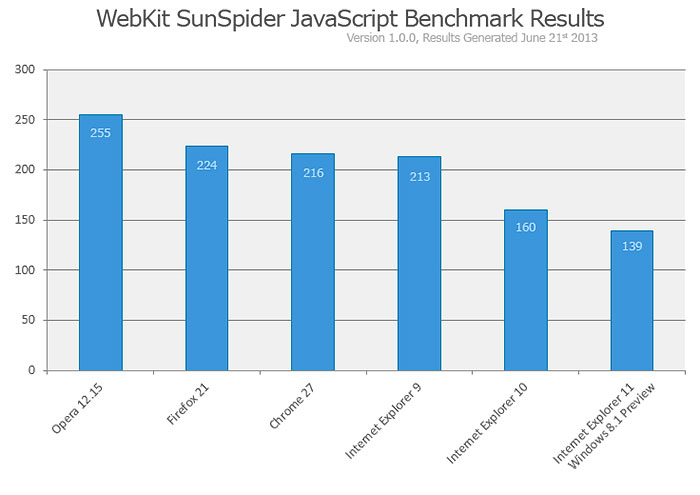