When it comes to the iPhone 4, each telco is more prepared after the previous experiences, from the early pre-orders, to the announcement of its price plans. And in a flurry of activity, we saw the back-to-back release of the iPhone 4 price plans from the three Singapore telcos, much earlier than how it happened for the iPhone 3G and 3GS launch. 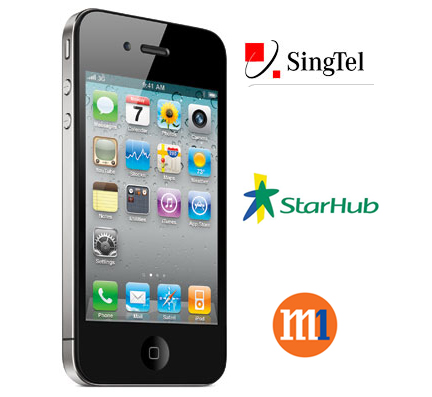 While it's true that you can get the iPhone 4 for a reasonable price (at $888 for the 16GB version), there are two main reasons for you to take up the telco offers. At the risk of stating the obvious, here's why:

So what does this mean for you, the consumer? If you've already indicated your interest in the iPhone 4 via each telco's iPhone page, you might be one of the lucky invited few for the Thursday midnight launch. Unfortunately, we've no indication how these users are chosen and it could either be random or customers subscribed on a higher price plan. In any case, for the lucky selected individuals, the designated iPhone 4 launch location for each telco is as follows:-

Following which, from 30th July (official opening hours) onwards, customers who have pre-registered and received a notification from their respective telcos can walk-in to their designated collection points.

In the meantime, if you wish to register your interest for the iPhone 4, here's the respective telcos' registration page:-

One word of advice - pre-register or call your respective telcos' hotline to enquire about the current stock status of the iPhone 4. This will save you a whole lot of hassle rather than walking in to find that the iPhone 4 is out of stock (which is highly likely).

Analyzing the price plans, there's a few models to consider, so we'll break it down into the basic, mid-range and premium tier across all telcos and price plans.

Looking at this tier with 100 minutes of talk time, it's mostly catered for the occasional chatter who spends more of his time fiddling with the various features of his iPhone. In short, if you see the iPhone 4 as more of an entertainment tool than a phone, or if you're on a tight budget, the question that comes to mind is - which telco offers the most affordable option?

Looking purely at the monthly subscription and iPhone pricing, you'll find M1's offer to be the best out of the group. To quantify it, look at the sums involved over the 2-year period:

Excluding other telco value added services, as you can see, if you're going for the basic plan, you should consider the following telcos in order of affordability - M1  > StarHub > SingTel.

The mid-range tier is aimed for those who want a balance for their iPhone usage. The focus is primarily on the talk time, with both M1 and StarHub giving similar talk times, and for both plans, M1 is offering a better deal with a lower subscription for its second lowest price plan.

SingTel offers less talk time for both plans, but if you feel that's sufficient, you should understand that you'll get a better deal with a lower subscription and iPhone cost as compared against StarHub's. In numbers, this is what you should look out for over the 2-year period:

One thing that needs to be noted is that M1's second highest plan, Extreme, has an edge in the data limit, in the sense that there isn't any. Also, on the second highest plan, SingTel's costing over the 2-year period is slightly lower, albeit you get less talk time than what M1 and StarHub is offering.

When one looks at the premium tier, the understanding is that cellular usage is unusually high. These plans are mostly targeted at business executives and sales personnel who depend on a 24/7 line of communication. As such, the iPhone 4 is definitely at $0, considering the premium pricing you pay for the subscription over the next 2 years.

In this case, the obvious choice is to go for the iPhone 32GB version, given that the 16GB variant is also provided at no cost. As to how the total cost translates over the 2-year period, here's the breakdown:

Sums aside, you need to consider the details of the price plans. M1 has the distinct advantage for providing not only unlimited data, but also unlimited talk time, at the lowest cost over the 2-year period. StarHub follows suit with the unlimited data, but still caps the talk time at 2000 minutes. This is similar to SingTel's 2000 minute cap, and putting it at a disadvantage is the 30GB data limit for its premium plan.

But before you do sign up the plan with the data limit as a consideration, we have to say that for an average user, 12GB of data is definitely sufficient. The unlimited data comes into play when you extend the mobile data use beyond your iPhone, i.e. tethering it to the PC for internet access. Even so, you shouldn't see yourself breaking the 12GB limit unless you are accessing huge files over the internet on a regular basis.