Changing for the Future - Intel's Core i7

Nehalem Becomes the Core i7

Nehalem Becomes the Core i7

Ever since Intel adopted its relentless Tick-Tock strategy of alternating between a new CPU microarchitecture and a process shrink of the existing architecture, the company has managed to keep up with both market expectations and the undeniable pressures of Moore's Law. But while all 'Ticks' and 'Tocks' are equally important, the latest development is especially so. For this particular 'Tock' sees the introduction of a new microarchitecture that is significantly different and like all architectural shifts, it's a move that's fraught with risk.

This much awaited development is the introduction of the Nehalem microarchitecture, debuting in the market in the form of its desktop variant, Bloomfield. Intel has also gone with a new name, Core i7 to distinguish it from the current Core 2 series of processors. Three quad-core models are available as we speak (Core i7-965 Extreme Edition, Core i7-940, Core i7-920), ranging from 2.66GHz to 3.2GHz and are targeted at power-users and enthusiasts, to be used together with the Core i7 compatible Intel X58 Express chipset, which incidentally also uses a new socket - LGA1366.

What the Nehalem represents, is a shift to a NUMA architecture (Non-Uniform Memory Access) that Intel's rival, AMD has been using ever since the debut of its Opteron processors. This is a strong sign from Intel that its current architecture is insufficient - due to the bottlenecks posed by the limited bus and memory bandwidth on the Core 2 platform - to handle the growing number of cores that will be expected in the near future. To read more about the details of the Nehalem microarchitecture, please refer to our previous in-depth article. 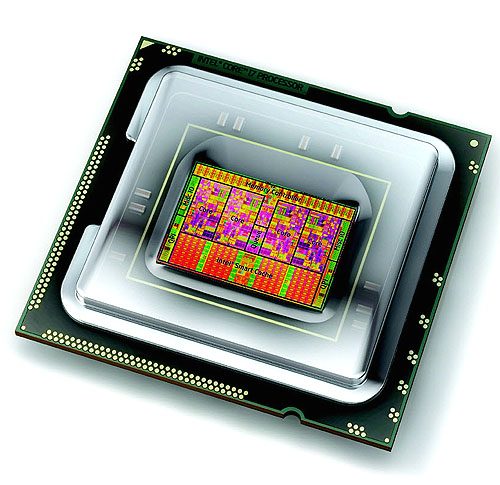 So what's really new about the Core i7 when compared to the Core 2? We list down some of the more important features that will be found on the new microarchitecture:-

Analogous to AMD's HyperTransport bus, Intel has come up with QuickPath Interconnect (QPI) as the high speed link between processors, memory and other internal communications (e.g I/O). To complement this, a memory controller is integrated to the processor, similar to what's found on the AMD platform. In short, say goodbye to the traditional Northbridge finally. QPI is designed to be scalable, with the number of QPI links set at two per CPU socket currently but this may increase depending on requirements.

This scalability can be seen in the newly launched Core i7 processors, with the top model, the Core i7-965 Extreme Edition having a QPI speed of 6.4 Gigatransfers/sec (up to 25.6Gb/s) while the other two models are limited to 4.8 Gigatransfers/sec.

The new integrated memory controller supports DDR3 memory of up to DDR3-1333 in a tri-channel configuration, immediately increasing the total memory bus width from the existing dual channels. Meanwhile, each channel can support up to 3 DIMMs maximum, giving a total of 9 memory slots for each processor. This also means that you'll find Core i7 motherboards to come in multiples of three for DIMM slots. As you may realize by now, the total amount of memory supported and its resultant bandwidth should become a non-issue with this new architecture.

The new memory configuration is also quite flexible. For each individual memory channel, you can have varying memory sizes. For example, one channel could have only 1GB of memory installed while the other channels could have 2GB. The catch is that within each channel (which you will remember can consist of up to three DIMM slots), the memory modules installed must be of the same size, e.g. 3 DIMMs of 1GB. To sum up, you can mix and match your memory sizes from channel to channel but within each channel, the installed DIMMs must be similar in size.

A critical limitation that we found with our Core i7 review samples was that Intel states that the processor can only work with DDR3 memory rated up to 1.6V (1.65V if you're pushing it) on its reference X58 Express chipset based motherboard (this limit is in-line with the maximum recommended CPU core voltage). Any higher voltage memory may damage the processor, even if the memory is operating within its safe limits. Obviously, this means that almost all high-speed DDR3 memory kits in the market now are not supported officially.

Memory vendors have already started to address this issue by releasing newer triple-channel memory kits while some motherboard manufacturers have confirmed that their retail boards are capable of stretching this limitation somewhat, with 1.7V quoted as the upper limit on these boards at the moment. There are also other notices going around that some board manufacturers can successfully run the memory voltage completely independent of the maximum recommended for the CPU. So for the moment, it's wiser to stick with the base recommendations and wait for a couple of months when the Core i7 scene gets more prevalent and more information and findings are available.

Another minor oddity is that while the Core i7 states that it officially supports up to DDR3-1066 memory, most if not all other board vendors have much higher support, even up to DDR3-2000. Obviously since this a CPU controlled variable, Intel's official support probably means that those are the modules that would surely run within its recommended 1.6V specifications. We've successfully run the memory at higher than 1600MHz and it works swell.