CD Projekt RED Strategy Update: Five Witcher titles and a Cyberpunk 2077 sequel are on the way 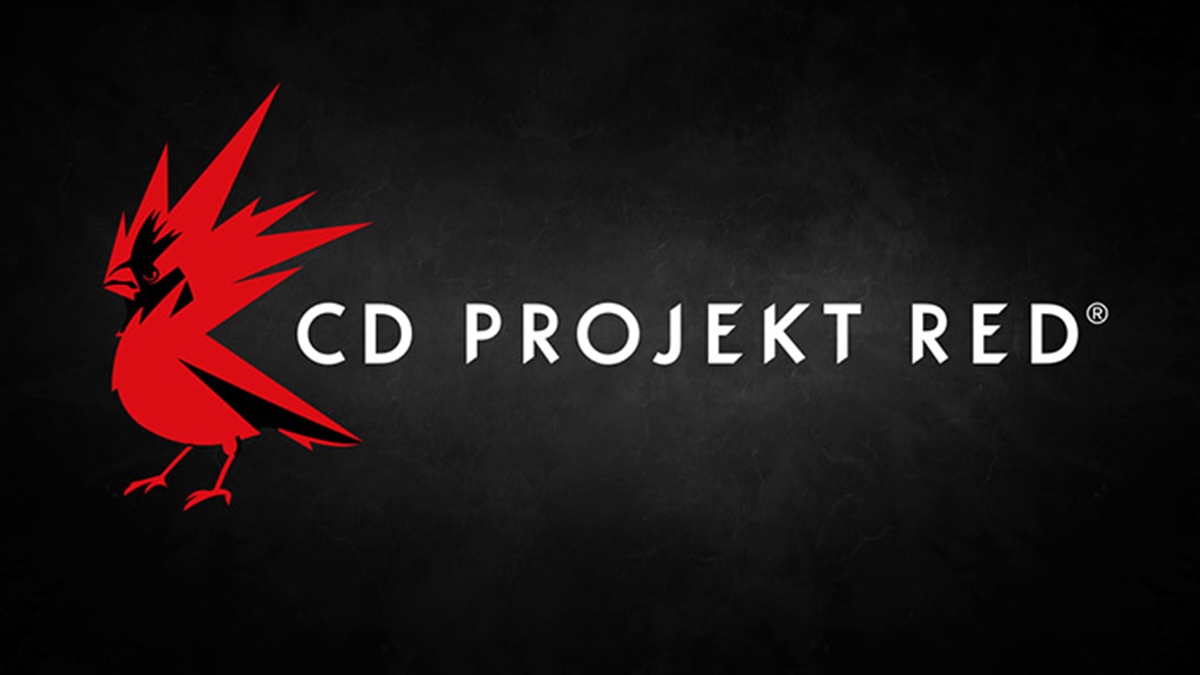 Not one. Not two, or even three, for that matter. FIVE.

Case in point, that's not the number of fingers everyone should normally have on one hand at any given time, but how many games we'll be getting down the line for The Witcher franchise. Earlier today, CD Projekt RED rolled out a slew of announcements on Twitter pertaining to its updated development timeline for 2023 and beyond, and boy, is there a lot to scroll through.

To help you with that, we've broken the announcements down into bite-sized pieces, starting off with a general overview of things followed by individual sections for each game. so feel free to check out the games that interest you the most!

Out of the five new Witcher titles mentioned earlier, it is worth noting that only three of them will be worked on directly by CDPR. The first game in this particular trio, which CDPR currently refers to as Project Polaris will kick-start an entirely new trilogy for the franchise, while the other two games, codenamed Project Sirius and Project Canis Majoris, will be developed by The Molasses Flood and a yet-unnamed third-party studio respectively. 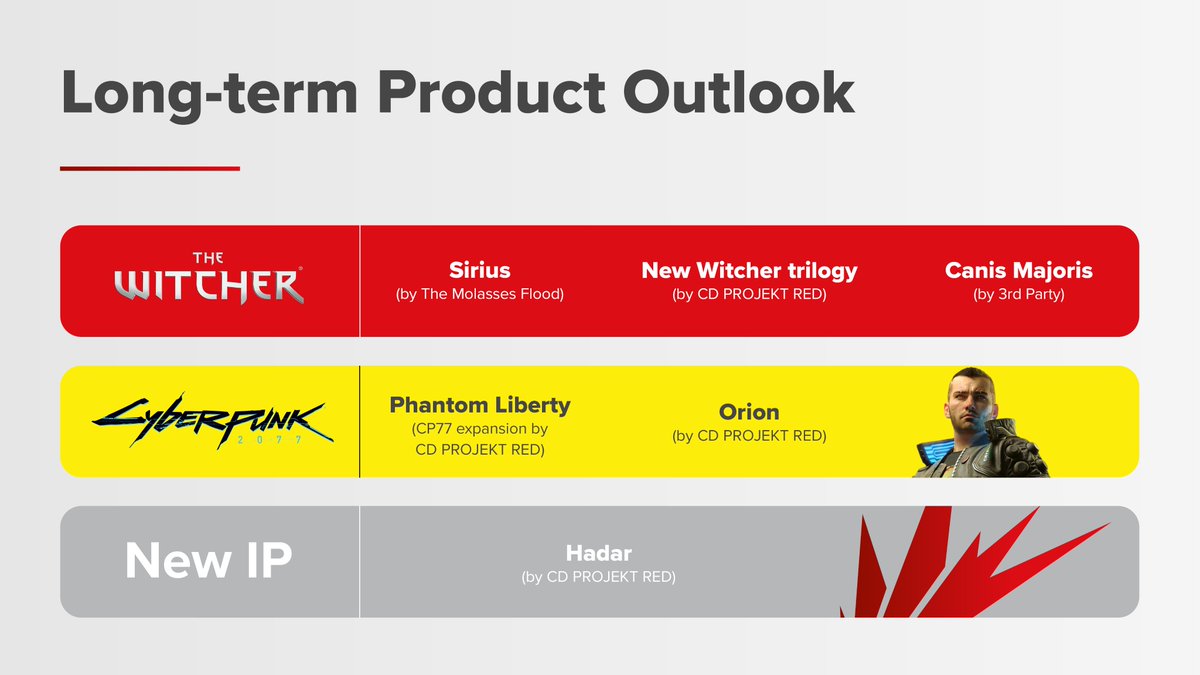 Of course, there's more than just The Witcher to look out for. On top of a brand-new standalone IP that it calls Project Hadar, CDPR also pushed out two announcements for the Cyberpunk 2077 universe. Specifically, it'll be getting a new DLC in 2023 titled Phantom Liberty as well as a brand-new sequel game called Project Orion.

Aside from games, CDPR has also announced that co-founder Marcin Iwinski will be stepping down from his post as joint CEO by the end of 2022. Following that, he will be submitting his candidacy for the role of Chairman of the Supervisory Board, where he hopes to continue contributing to CDPR's growth and development, which he says fills him with "hunger and optimism for what's ahead". 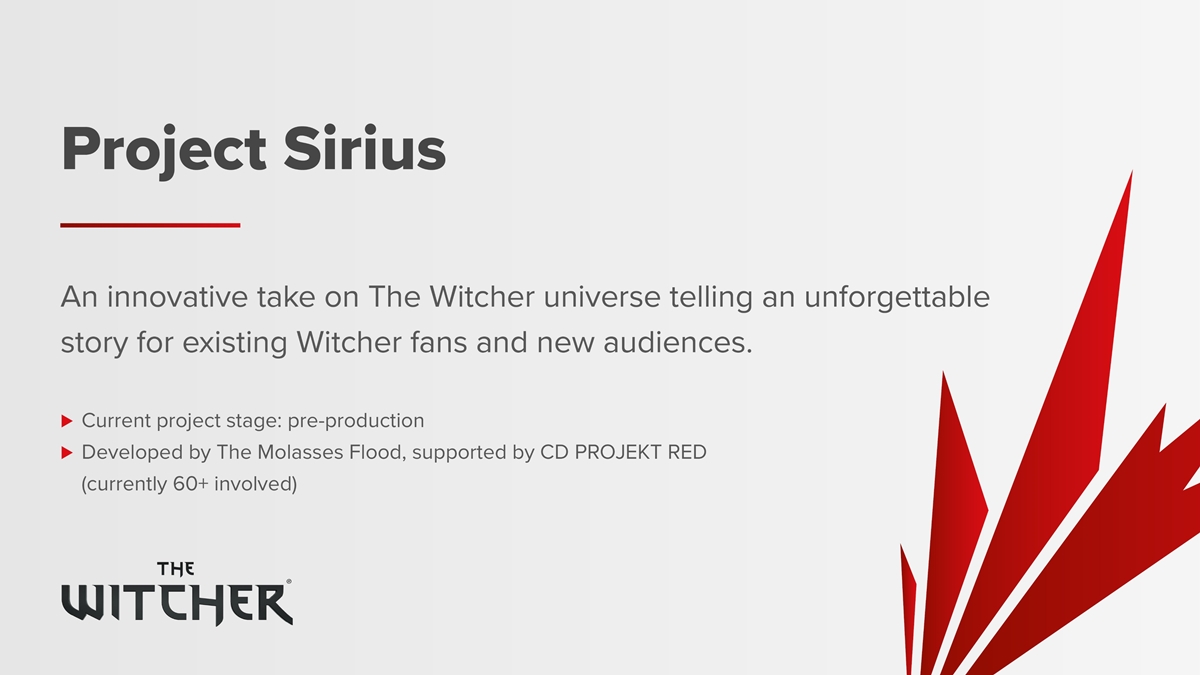 According to CDPR's development timeline, the first of the five new Witcher titles, Project Sirius promises to be "an innovative take" based on the groundwork laid out by the existing trilogy. It's not yet known what kind of game this will turn out to be, though we can certainly envision a city builder of sorts considering what The Molasses Flood has worked on previously. Additionally, since it's currently in its pre-production phase, mid-2023 is probably a safe estimate for our next update. 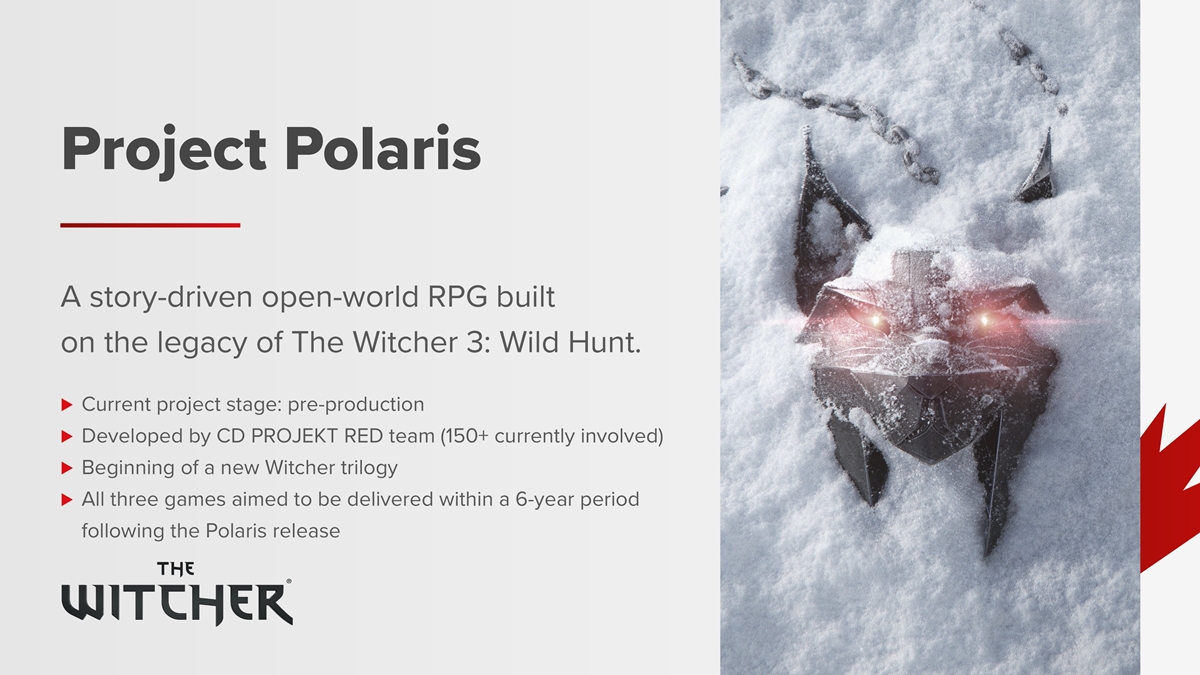 Following Sirius is the start of the brand-new Witcher trilogy, all of which will be developed in-house by CDPR and released over the next six years. Among the five new titles for the franchise, Project Polaris is probably the one we can assume the most about right now since it builds upon the gameplay formula established in The Witcher 3. Although it probably won't be a carbon copy in terms of mechanics, Polaris (and by extension, the other two sequels) will remain a "story-driven, open-world RPG" experience.

Finally, like the aforementioned Project Sirius, this game is also in its pre-production stage. 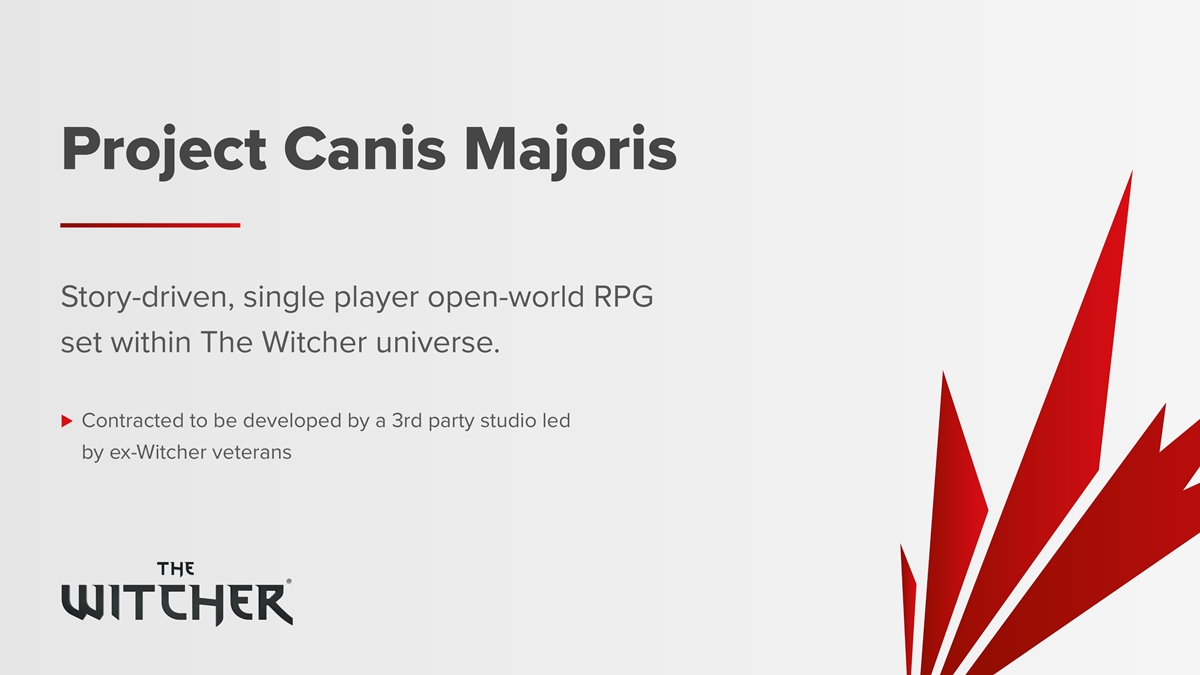 The last of the five new Witcher titles is Project Canis Majoris, and it's also the only one that will be worked on outside of CDPR and its subsidiaries. Specifically, it'll be developed by a team of ex-Witcher veterans and will reportedly be a single-player action RPG experience set within the same universe. 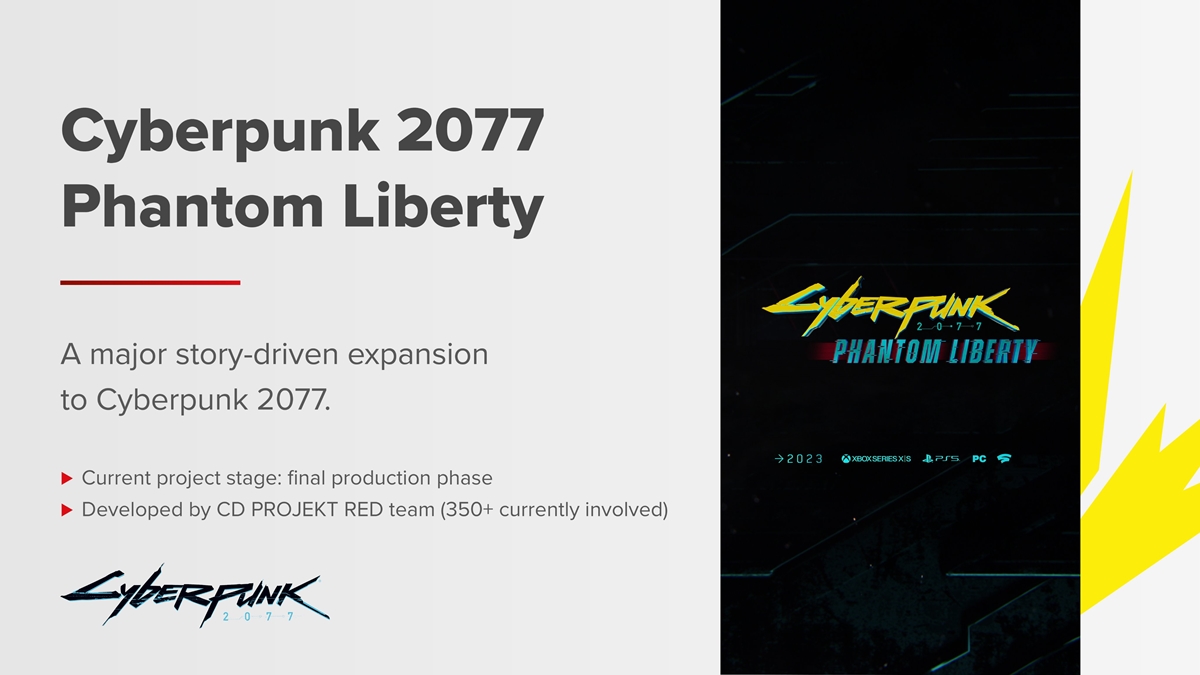 Moving on to Cyberpunk 2077, CDPR has announced that the new Phantom Liberty DLC is already in its final phase of production. Accordingly, we can probably expect it to arrive within the first quarter of 2023, and CDPR's post (above) describes it as a "major story-driven expansion". So, let's put it this way: if Cyberpunk Edgerunners (which we thought was amazing) wasn't enough motivation to get you to return to Night City, then here's more. 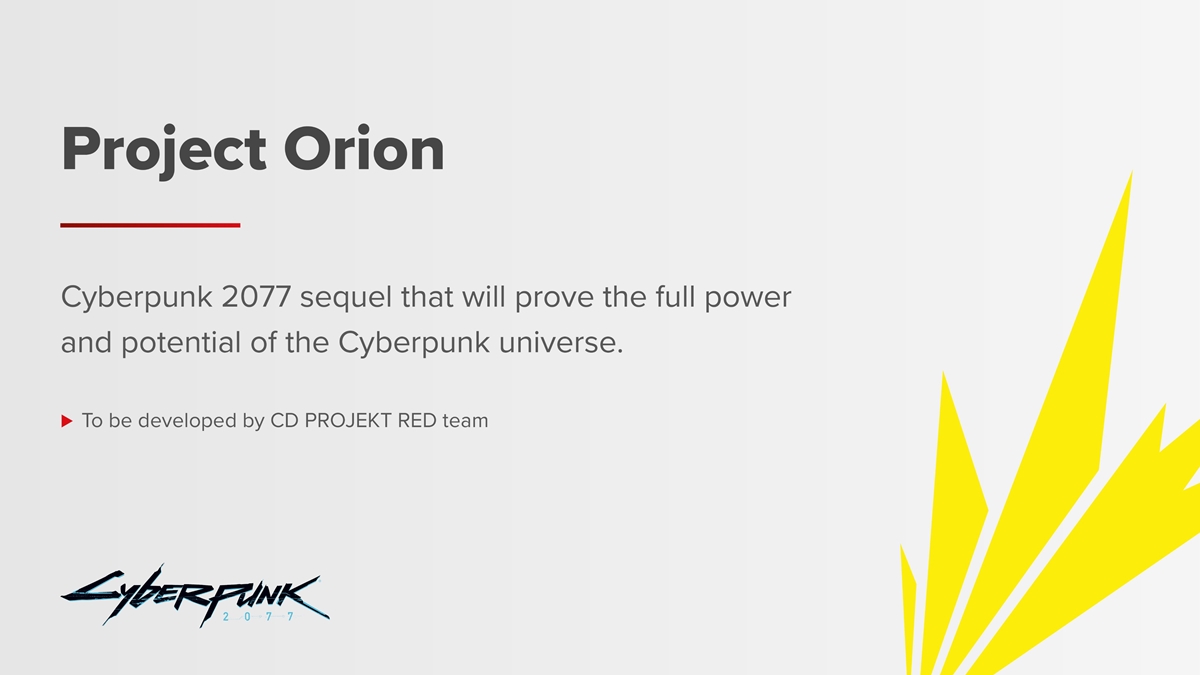 Personally, this is the announcement that really takes the cake for me, and for all intents and purposes, it probably ate it too. According to CDPR, Project Orion is touted to be a Cyberpunk 2077 sequel that will "prove the full power and potential of the Cyberpunk universe", and despite the fact that we literally have zero information on this particular title right now, I'm already hyped to see what they intend to do with Night City.

Needless to say, one hopes that Orion will have a much better release than its predecessor, too. 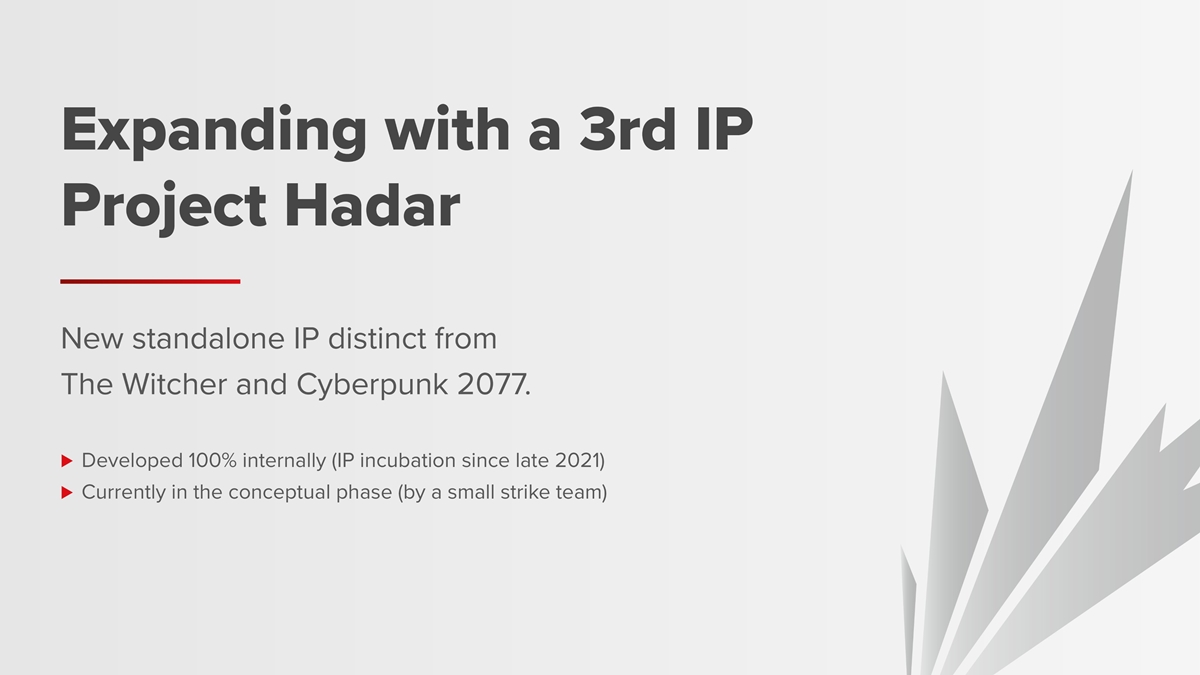 Last but not least, we have a brand-new IP. Announced as a standalone title for CDPR, Project Hadar is currently still in its conceptual phase, which means two things. One, we don't have much to go on at the moment, and two, we probably won't hear much about it till late 2023 or so. Still, given CDPR's other announcement regarding the introduction of multiplayer components into its games, we can safely assume that Project Hadar will feature something along those lines.

For more information on these titles and other related announcements, feel free to check out the CD Projekt RED Investor Relations Twitter.