Can Qualcomm's new Snapdragon 845 be more power efficient than a mid-range processor? As seen in the above image, you might notice a drastic current draw difference while running the benchmarks between the two devices. However, the visible current draw stat is the actual real-time current draw and it’s not a good base of comparison for a test with very differing workloads every few seconds. The power analyzer data logger does report a more valuable stat in fine print – average current and average power draw over the duration of running the test for more than half an hour. Here’s what we noticed:- Now that we’ve established the Snapdragon 845’s power efficiency claims against the existing flagship, how does it measure up against a better known mid-range processor platform like the Snapdragon 660? Devices using this processor have usually had pretty good battery life stats, so Qualcomm decided to prove a point to challenge the Snapdragon 845 against it. For this test, they chose to run a 4K video at 30fps to accommodate the lower tier nature of the device. 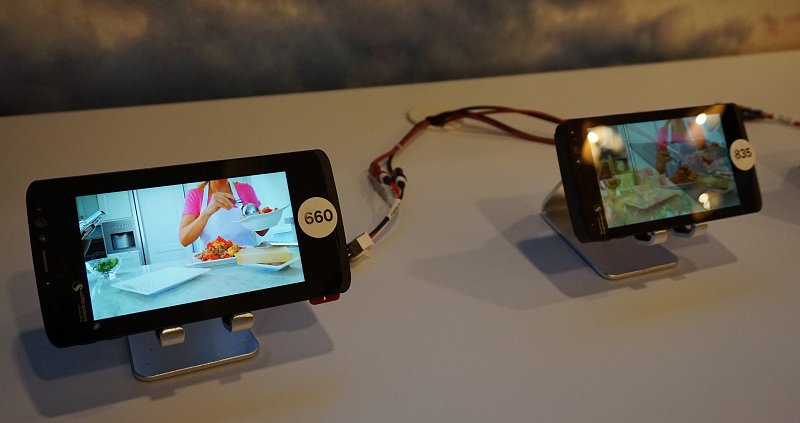 Note the power draw for Snapdragon 660 and 835 are fairly similar. However, Snapdragon 845 leads both of them – not by a large degree, but it nevertheless proves that it’s more power efficient than a mid-range processing platform. Peering into the average power draw stats also corroborates with the instantaneous power draw differences where the Snapdragon 845 is leading the charge.

Speaking of charging, Snapdragon 845 supports the very latest Quick Charge 4+ standard, which claims to be 15% faster and 30% more efficient than Quick Charge 4 that’s supported by default on Snapdragon 835. While the latter already boasts up to five hours of usage on just 5 minutes of charging, the newest QC 4+ offers 50% charge in just 15 minutes (based on a 2,750mAh battery based device). What’s more, QC 4+ is compatible with USB Power Delivery standard, so you can look forward to using more compatible chargers. Hit up this article for more details on Quick Charge 4+.