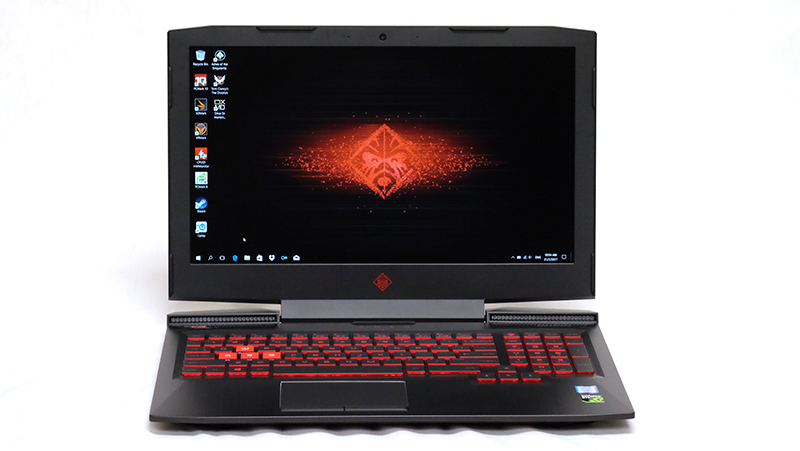 HP has given its Omen laptops a design makeover. While the hardware remains mostly unchanged, the new Omen 15 is a refreshing take on the Omen gaming brand, with far more character and visual flair.

The lid sports a distinctive X pattern and the Omen logo – it’s a little ostentatious, but it makes for quite a nice look overall. In addition, this is the thinnest notebook in this shootout at 24.8mm thick, although it is still quite hefty at a good 2.568kg.

The old Omen designs were almost boring, with safe contours and rounded edges. The updated Omen changes that with bolder, more aggressive lines and a hinge design that reminds us of what Lenovo did with the Legion Y520. 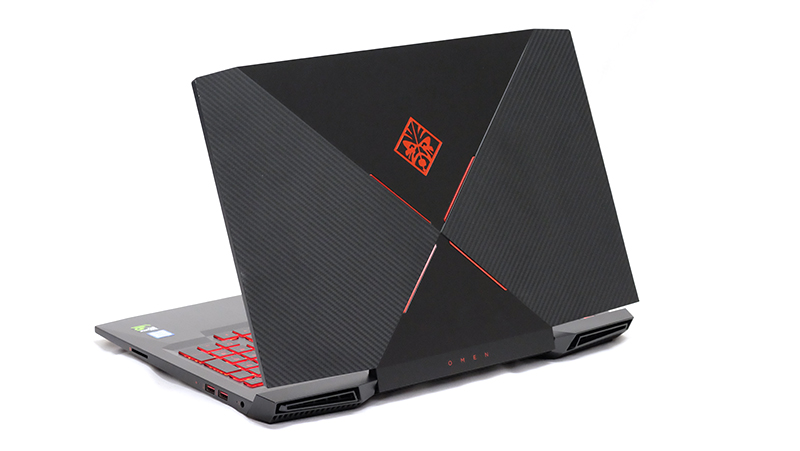 The hinge doesn’t cover the entire length of the notebook, so there’s quite a striking gap between the display and the body of the laptop. Two decorative grills flank the hinge, and they’re purely ornamental and not actually speakers as on the Lenovo Legion Y520. The real speakers are located at the bottom of the notebook, and the dual Bang & Olufsen-tuned speakers manage to pump out fairly decent sound. 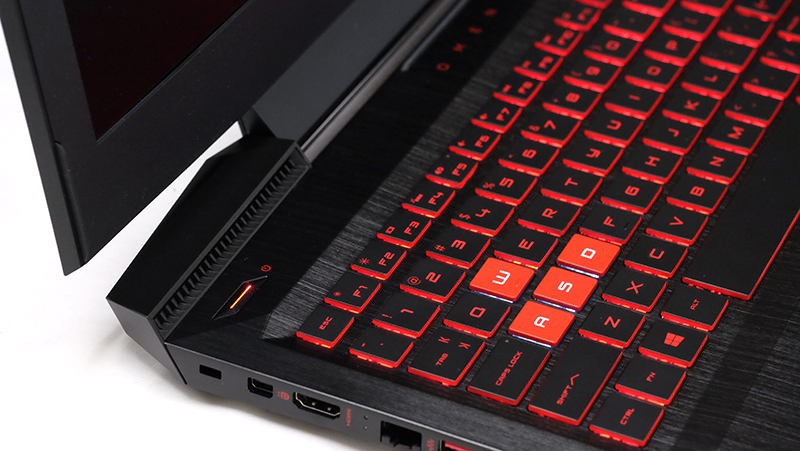 We’d even venture to say that these are the best speakers among all the notebooks we tested. Music sounded full-bodied, for a laptop that is, and the speakers can easily fill a room at less than maximum volume. 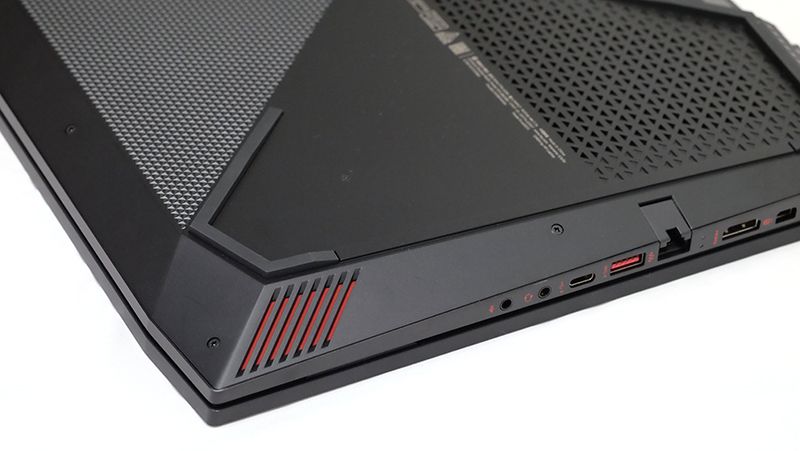 The base of the laptop also features a brushed metal finish for a slightly more upmarket look, and the laptop feels quite sturdily built as well. There’s almost no flex to the base, and the keyboard itself offers good key travel distance and quite a pleasant typing experience. Similarly, the trackpad felt responsive and accurate, which is not exactly a given even today.

The keyboard offers just a single-color red backlight, but the backlight toggle key lets you switch between lighting up the entire keyboard or just the WASD key cluster. In the latter case, the backlight is actually white.

Another nice touch is a built-in shortcut to disable the Windows key while in game, and you can activate it by hitting Fn + F12. On top of that, there is a dedicated Omen button that launches the Omen Command Center, which lets you view things like CPU and memory usage. 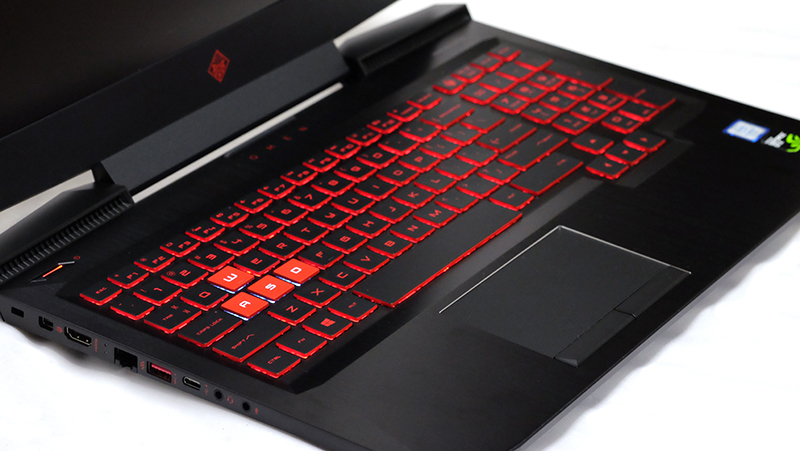 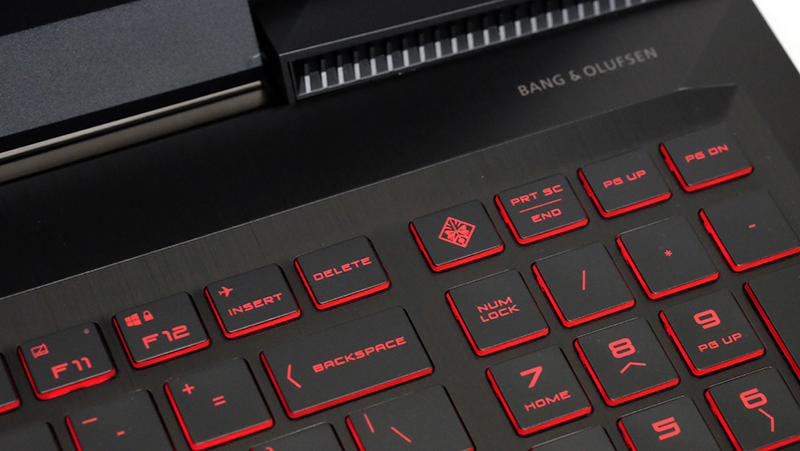 The 1,920 x 1,080-pixel IPS display has a matte coating that helps with overhead reflections, and the display is one of the better ones in this shootout. Pictures and games don’t appear washed out at the very least, and that’s probably what really matters.

When it comes to cooling, the Omen 15 is a rather quiet laptop, and it never gets excessively loud. HP also has something called CoolSense, which supposedly adjusts fans and system performance when you’re on the go.

You’ll find a decent selection of ports and connectors on board as well, including one HDMI and one Mini DisplayPort output, three USB 3.0 ports, and one USB-C connector.  This is the only notebook to not have any USB 2.0 ports, so you’ll get faster transfers regardless of which connector you pick.

Finally, HP has also thrown in a 128GB Samsung PM961 PCIe NVMe SSD and 2x2 Realtek RTL8822BE wireless module, a nice step up from the SATA and 1x1 wireless modules on most of the other laptops. To cap matters off, HP has also crammed in a good-sized 70Wh battery, which means the Omen actually has the longest battery life out of all our tested notebooks.

The Omen 15 costs S$1,999, which alongside the MSI GP62 7REX Leopard Pro, makes it the most expensive laptop in this shootout. This is not a bad laptop, but it’s a little difficult to justify the price when you’re getting just 8GB of RAM for this class of GeForce GTX 1050 Ti based gaming notebooks.