Held at Suntec Convention Center, BroadcastAsia 2012 is an excellent opportunity for businesses and enterprises to check out the latest technologies in the broadcast industry. However, at the same time, the show allows us a peek into the future and a chance to check up on the latest trends shaping the audio and visual market segment. Besides displaying a host of new hardware there was evidence of new moves with regards to Over-the-Top (OTT) services, digital terrestrial transmission standards, content resolution and much more.

The Advent of DVB-T2

Singapore has already adopted the digital terrestrial transmission standard titled DVB-T2 and is awaiting its deployment. The technology is already in use in European countries such as the UK, Italy and Sweden. Unlike its predecessor, DVB-T, DVB-T2 is able to offer higher bit rates which can allow for the streaming of HD content. This should be great news for anyone with a HD TV, such as the Samsung D8000 or the LG LM9600. Current SD content does not do justice to the performance that these televisions are capable of offering and DVB-T2 will hopefully help them realize their full potential.

To elaborate further, DVB-T2 is a system which transmits compressed digital audio, video and other data in "physical layer pipes". Transmission is achieved using Orthogonal Frequency-Division Multiplexing (OFDM) which encodes the data on multiple frequencies, along with concatenated channel coding and interleaving. As a result DVB-T2 can offer higher data rates or robustness than ever before. BroadcastAsia 2012 had a few vendors showcasing DVB-T2 ready setup boxes which should become commonplace once the system is in place in Singapore.

For those who are a bit more arcane in their pursuit of tech, the following provides a comparison of DVB-T and DVB-T2. The new and improved features for the latter can be seen in bold. For more reading and local deployment plans, do check out out our past coverage. 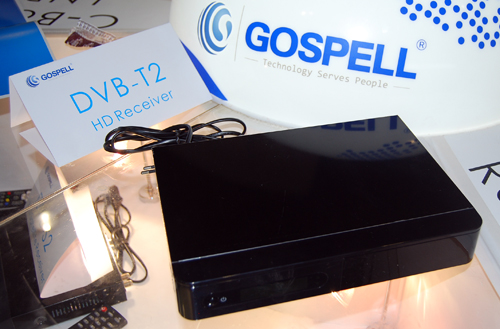 We have already touched on Over-the-Top (OTT) services when we were given a sneak preview of what to expect from BroadcastAsia 2012. Seeing the rate with which Singaporeans have taken to smartphones and tablets, it is no wonder that BroadcastAsia 2012 decided to dedicate a specific portion of the showfloor to OTT. The second screen has gained a lot of importance among users for casual watching and the big wigs are taking note. 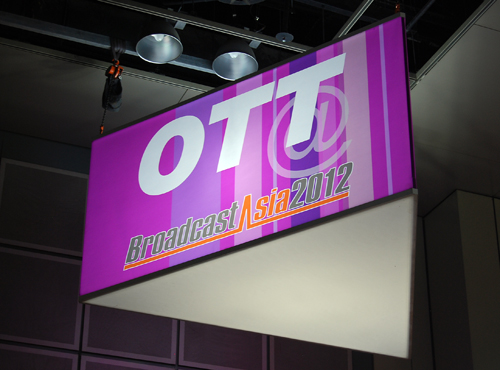 OTT represents the culmination of co-operation between different parties. Content providers, data management specialists and front end designers have to come together to deliver the end product. Players such as Sony, ESV, Switch Media and Starhub, along with many more shared the area to display their products.

The major advantage of OTT is the shifting control, which is taken from the content producer and placed in the hands of the consumer. Being able to access music, movies and videos at their own convenience and on the device of their choice whether it is a tablet, smartphone, notebook or TV, seems to be one of the major thrusts of these services.