Tiger and Windows on the Same Machine?

Tiger and Windows on the Same Machine?

Very unlikely. Highly impossible! These were familiar expressions used to describe the possibility of mixing a Mac and a PC together for several years now – until very recently when interesting and unprecedented developments took place. It all started when Apple announced in the beginning of the year that all new iMac systems and their new professional notebooks, MacBook Pro, to be using Intel's just launched Yonah processors or otherwise now known as Intel Core Duo. From face value, it seemed that the decision was from a technical viewpoint to offer their customers a much-needed speed bump while not breeching thermal dissipation and power requirement quotas. With the latest Macs now conforming to the x86 instruction set architecture (ISA) and running an x86 version of the OS X, people have been endlessly speculating of running Windows on a Mac system and OS X on a Wintel machine – basically fusing the best of both worlds to fulfill the eternal dream. Of course things aren't as straightforward as they seem, as there are plenty of restrictions to ensure everything works only in their respective hardware to prevent a mass epidemic movement of sort. 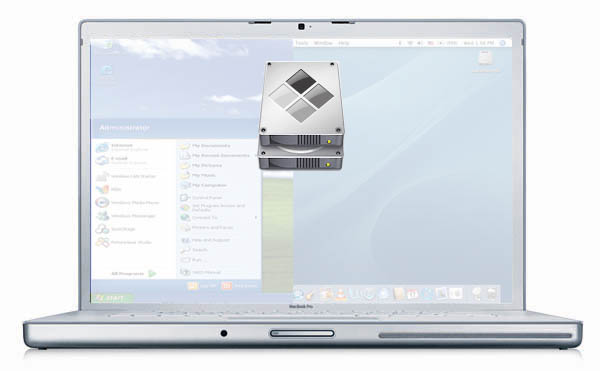 However coincidentally or not (in the grand scheme of things), on the 4th of April 2006, Apple has 'given in' to support Windows on its Mac systems using Intel processors. Developed by Apple, the introduction of Boot Camp basically allows Mac users set up Windows XP as a secondary operating system on their Mac computer. For now, users with Intel-based Mac such as the new iMac, Mac mini and MacBook Pro (MBP) with Boot Camp can boot either to OS X or Windows XP (SP2) at any one time. Though published by Apple, Boot Camp is however a public beta download. So while it is free, you'll have to enjoy this versatility at your own risk for the time being.

Fortunately, Apple has mentioned that when they release the next major update of the Mac OS X, Leopard, Boot Camp will be integrated as a standard feature. This is certainly great news as that means Boot Camp is not a one-off development effort relegated as a non-supported beta utility, but one that would mature and manifest itself in future Mac operating systems to breath new life and usage roles. So what does this all translate to consumers and existing customers? After some consideration, we have compiled some of the key reasons why you should get all excited about Boot Camp and what it means to you. Read on.